When Jaguar launched the original Jaguar F-Type in 2013 the hype that surrounded its arrival was palpable. Why wouldn’t it be? Here was one of Britain’s most revered sports car marques launching what was, well, its first bona fide two-seat sports car in what felt like forever.

This was no mere replacement for the long-standing XK; the F-Type signified something much bigger than that. Not only did Jaguar know that its name would explicitly mark it out as a spiritual successor to Sir William Lyons’s legendary E-Type, but it was also the car with which it would very successfully, and with a healthy dose of supercharged British attitude, take the fight to the likes of Porsche and its formidable 911.

Fast-forward to 2020 and it’s tricky to shake the feeling that the excitement that frames the arrival of a driver’s car such as the F-Type has morphed into something a degree more cautious and reserved. This shift has nothing to do with the ability of this new, heavily facelifted model in particular, however; it’s more a product of the wider context in which cars of its ilk now exist.

A few hours before I sat down to write this, news of the government’s intention to bring forward the 2040 ban on the sale of new petrol, diesel and hybrid cars first broke. We could now be looking at a 2035 cut-off point – and potentially sooner if the powers that be see fit to tax the internal combustion engine so severely that it’s no longer a financially viable option.

Either way, it’s becoming increasingly apparent that cars like the F-Type are on borrowed time. And while environmental concerns might mean such moves are a necessary evil, the fact remains that their demise will be a sad eventuality for petrolheads the world over. At the same time, however, it makes the process of examining this latest F-Type’s technical specifications that much more of a ritual to be savoured.

Admittedly the entry-level 296bhp 2.0-litre four-pot model isn’t the most exotic starting point, and the coupé’s £54,060 price tag (the convertible is some £5500 more) does put it in direct competition with the likes of the excellent BMW M2 Competition, Alpine A110 and Porsche ’s faster 718 models.

Nevertheless, the significance of the four-cylinder F-Type should not be underestimated: its immense popularity with customers and comparatively lower emissions helped Jaguar justify the continuation of its rather more unhinged eight-cylinder models – of which there are now two. The first makes use of a 444bhp, 428lb ft version of the marque’s tremendous supercharged 5.0-litre V8. This £69,990 model in effect replaces the old supercharged V6 in European line-ups, although it’s worth pointing out this is still offered in the US. Like the four-pot, the ‘P450’ V8 is available in both coupé and convertible guises, but where the lower-powered model is exclusively rear-driven, this V8 can be bought with all-wheel drive as an option.

Talk to Jaguar’s engineers, however, and they’ll tell you it’s the rear-driven, 444bhp coupé that’s the new sweet spot of the range. That may well be true, but until we get the chance to have a go we’ll have to take them at their word. Our test car for the duration of our time in sunny Portugal was the other V8: the range-topping all-wheel-drive only ‘P575’ F-Type R. You can expect to pay £97,280 for the coupé and £102,370 for the rag-top.

Admittedly that’s quite a lot of money, but you get the sense that Jaguar has really gone to town on this car’s development. In addition to the 567bhp and 516lb ft you get from its engine (the same as the old F-Type SVR), Jaguar has completely recalibrated its electronically-assisted power steering, while its eight-speed ZF transmission has been tweaked using lessons learnt during the development of the XE SV Project 8. Its suspension has also been overhauled (more on which in the accompanying sidebar on the right), while its 265/35 front and 305/30 rear Pirelli P-Zeros are specially developed and are now 10mm wider than before.

The upshot of all this is an F-Type with explosive straight-line performance and sports car-like handling and stability, but with a smaller dose of long-legged GT usability thrown in for good measure. It rides impressively well, too, at once feeling more pliant and more forgiving than a similarly-priced 992 Carrera 4S.

That said, a few corners are all that are required to discover the fact that the Jaguar lacks the abundant balance and handling purity of the Porsche. But so intoxicating is the F-Type’s demeanour that you hardly feel like you’re missing out.

Its steering is beautifully weighted and impressively intuitive, with a quickened off-centre response prompting suitably agile movements from the front end. With its adaptive dampers firmed up there is admittedly some body roll as you guide its 1743kg mass through corners, but the rate at which this arrives feels entirely natural and impressively controlled. Coupled with its immense all-paw traction, the result for the driver is simply a huge amount of confidence during hard charges up and down technical mountain roads. That’s not to say it’s come over all sterile, mind. You can feel its rear end eagerly twitching and shimmying as you lean on the power on the way out of bends.

Which you will be doing rather a lot, given what’s under the bonnet. The performance and thunderous character of that 5.0-litre supercharged V8 is what defines a drive in the F-Type – although not to such an extent that it casts an uncomfortably long shadow over the way it rides and handles. Throttle response is immediate, and although it doesn’t start pulling in earnest until about 3000rpm, the linearity of its acceleration and the volcanic soundtrack combine to make the F-Type R feel every bit as fast as its 3.7sec 0-62mph time suggests it is.

Full-throttle upshifts deliver a forceful kick to the base of your spine, while the transmission’s gearing is well-judged for quick road driving: you’ll be doing roughly 65mph by the time you hit the top of second. Adopt a more relaxed driving style and it swaps ratios with impressive efficiency.

The general layout of the cabin hasn’t changed a great deal but ergonomically it still works a treat. The leather upholstery is nice and the seats are supportive, but it’s a wee way off the new 911 for outright sophistication. Meanwhile, the new 12.3in digital instrument binnacle is clear and easy to read if a little visually underwhelming, while the updated 10in touchscreen infotainment system now features Apple CarPlay and Android Auto as standard. You’ll use this a lot, as Jag’s operating system is, comparatively speaking, still a bit rubbish. 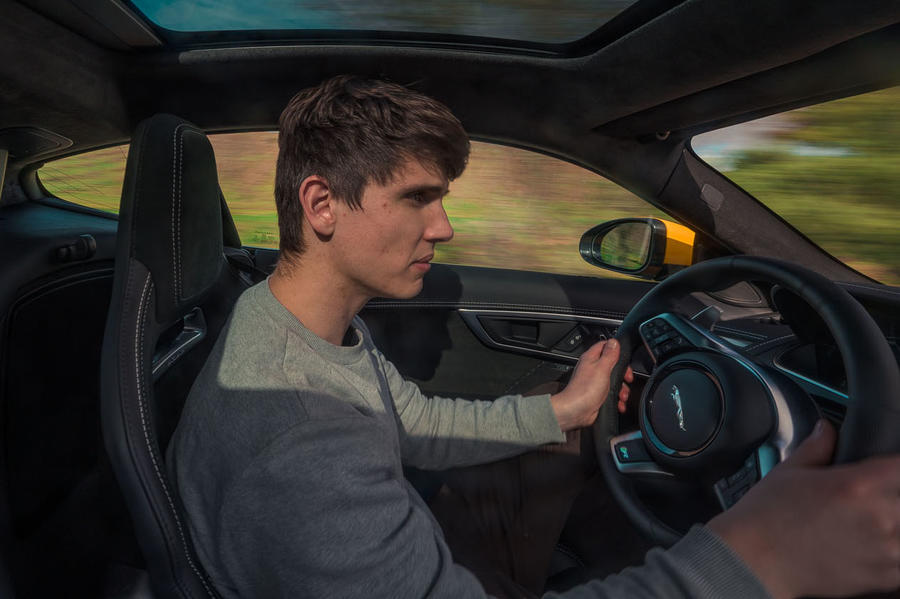 Nevertheless, the F-Type R remains a thoroughly likeable, deeply exciting car – even if it doesn’t look quite as good as it did before. And while it might not be as technically capable or as pure in its responses as the 992, so potent is its thuggish but charming sense of V8 character that it’d be the car I’d have.

Call me a philistine, but they won’t be making them like this for much longer. 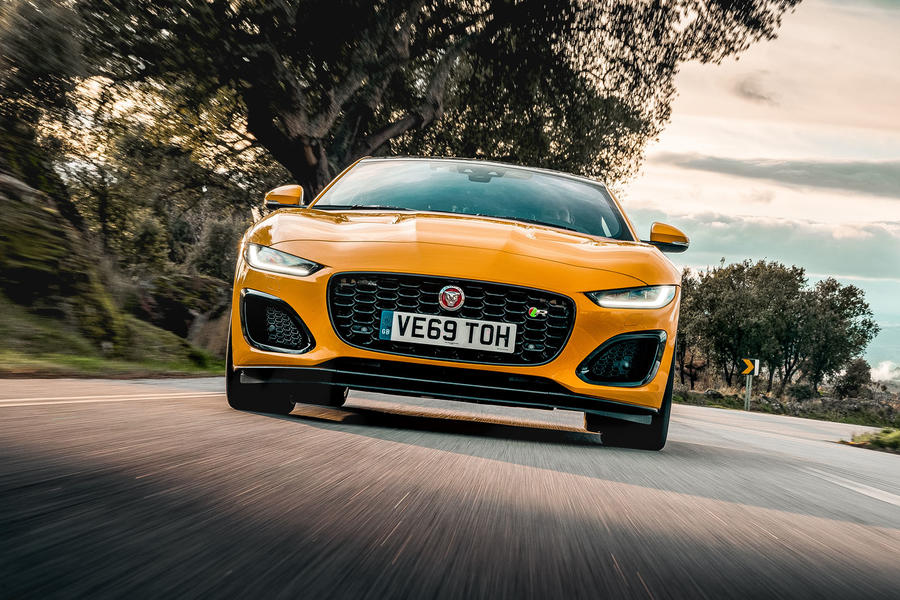 It's not the fuel consumption Soldi......

It's the depreciation! A Jaguar dealer has a 19 reg, pre-facelift convertible 575 AWD, in black with a red interior, which looks stunning in comparison to the car being reviewed here. It has 4k miles on the clock and the asking price is £87k, and there will be some room for negotiation in that price, especially in today's weather! Image what the trade-in price would be on it!