From £48,9467
Based on the Kia Stinger, Genesis' new G70 saloon shows plenty of promising signs that it could be a hit in Europe
Open gallery
Close

The steady rise of Genesis continues with the G70 – a new four-door saloon conceived as a direct competitor to the Audi A4, BMW 3 Series, Infiniti Q50, Jaguar XE, Lexus IS and Mercedes-Benz C-Class.

Set to go on sale in South Korea and North America in early 2018, the new G70 is a sister model to the new Kia Stinger and is the third dedicated Genesis model after the larger G80 and G90. The G70 and Stinger share a platform, which uses a longitudinally mounted engine and offers the choice of front or rear-wheel drive.

While the saloon will not come to the UK in the short term, Genesis confirms a strategy is in place to introduce the G70 to European markets by the end of the decade, by which time it also plans to introduce up to three SUV models as part of a six-strong global line-up.

At 4685mm in length, 1850mm in width and 1400mm in height, the G70 is 61mm longer, 39mm wider and 31mm lower than the 3 Series saloon – a car that Genesis chairman Manfred Fitzgerald said has played a decisive role in its development.

We’ll leave you to decide whether you like the look of the upmarket Hyundai brand’s latest model. But the G70 does boast better proportions than many recent executive-class saloons: a long bonnet and backwards sweep to the cabin emphasise its rear-wheel-drive layout, while wide tracks and a long wheelbase provide it with a satisfying stance and suitably short overhangs. To our eyes, its best angle is the rear three-quarter view, with a muscular rear fender providing a purposeful appearance.

The G70 will offer three turbocharged engines in combination with either standard rear-wheel drive or optional four-wheel drive, including a headlining 3.3-litre V6 petrol unit delivering 365bhp and 383lb ft of torque. This endows the range-topping model with 44bhp and 51lb ft more than the turbocharged 3.0-litre in-line six-cylinder petrol engine used by the 340i.

There’s also a 2.0-litre four-cylinder petrol unit with 252bhp and 265lb ft in standard guise and a more powerful 255bhp with the same 265lb ft when combined with an optional Sport Package. With an eye on Europe, the G70 also gets a 2.2-litre four-cylinder common rail diesel with 202bhp and 332lb ft.

The V6 engine in the G70 AWD driven here has a sporting edge that will be appreciated by enthusiasts. There is plenty of torque concentrated down low and a free-revving nature to its delivery means it can be worked hard without any undue harshness. The standard eight-speed automatic gearbox, on the other hand, is a little slow to react both in automatic and manual modes, even if the actual shifts are quite smooth.

It is not meant to be an out-and-out performance saloon. However, the initial top-of-the-line G70 AWD’s claimed 0-62mph time of 4.7sec is quicker than the time quoted for the 340i xDrive. It also tops its German rival on top speed at 168mph versus a limited 155mph. Fuel consumption is a disappointment, though: the Genesis returns 25.5mpg against an impressive 40.9mpg for the BMW. 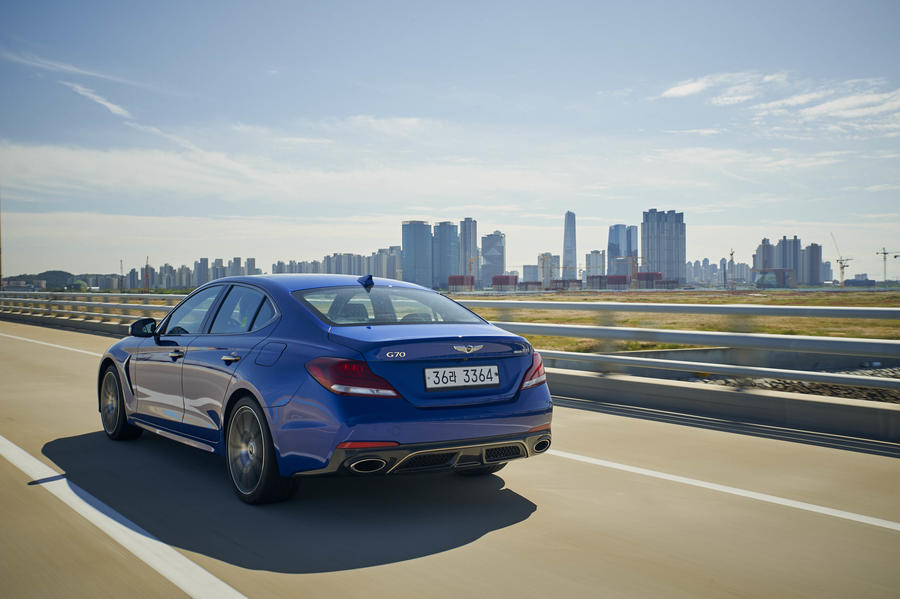 The G70 receives a sophisticated interior that is more cohesive than its exterior and is supported by a pleasing combination of materials. There are proper metal detailing, aluminium trims, agreeable soft-touch plastics and loads of quilted leather. It is perhaps not quite to the level of the A4 and C-Class, although it is streets ahead of the 3 Series and an improvement on the Q50 and IS.

The cabin is well insulated, with little wind noise at typical motorway cruising speeds, which helps to provide the G70 with a premium ambiance that lifts it well above its mainstream Hyundai siblings. The front seats offer plenty of support and comfort, with decent knee room and head room. It is a different story in the rear, however, where knee room is scarce when the front seats are positioned to accommodate an adult and the sloping roofline compromises head room. The boot, meanwhile, is quite deep, but a rather small aperture limits loading width.

Genesis says it intends to offer more standard equipment than its rivals. Korean specification models receive a comprehensive safety package, including nine airbags as well as a suite of features under the banner 'Genesis Active Safety Control', including forward collision warning, blindspot warning and a semi-autonomous driving function that incorporates adaptive cruise control.

Like all of its key rivals, the G70 uses a multi-link rear suspension. It is allied to a mechanical limited-slip differential and, in four-wheel-drive versions, a torque vectoring function to juggle the apportioning of drive between each individual rear wheel. It also boasts a front-to-rear weight distribution of 50/50.

Genesis’ research and development boss, Albert Biermann, certainly knows a thing or two about chassis tuning, having being responsible for the development of the current BMW M3 and BMW M4 before moving to Hyundai. He says the aim was not to compete head on with the German competition with a car of exclusively sporting attributes. Rather, the G70 is intended to deliver more compliant and comfortable qualities – but still with a sporting and engaging edge when switched into the most dynamic of its five driving modes, which are Eco, Smart, Sport, Comfort and Custom.

A lengthy drive on public roads revealed the G70 hits its target of delivering comfort over sportiness, with predictable handling and a general ease of driving that will undoubtedly appeal to executive car buyers. The Korean specification model we drove was able to sponge away smaller bumps effectively enough, though it was occasionally unsettled by larger undulations, which revealed a lack of damping control.

What does impress is the car's ability to suppress road noise. In this respect, it is every bit as accomplished as the Japanese competition and ahead of its German rivals. However, the electronic-assisted steering lacks consistent weighting; there’s a lightness off-centre but artificial weightiness when you wind on lock, especially in Sport mode. The added weight would be welcome if it brought extra feel, but it doesn’t.

Genesis did have prototype of a rear-wheel-drive American market model, which will be marketed under the G70 Dynamic name, for us to drive, featuring a firmer suspension, altered steering mapping, larger brakes and Michelin Pilot Sport 4 tyres. It possessed greater poise and a more engaging character than the Korean specification model, with more responsive turn-in traits, decent mid-corner grip, greater body control and sharper stopping qualities, although it is a less cosseting ride. 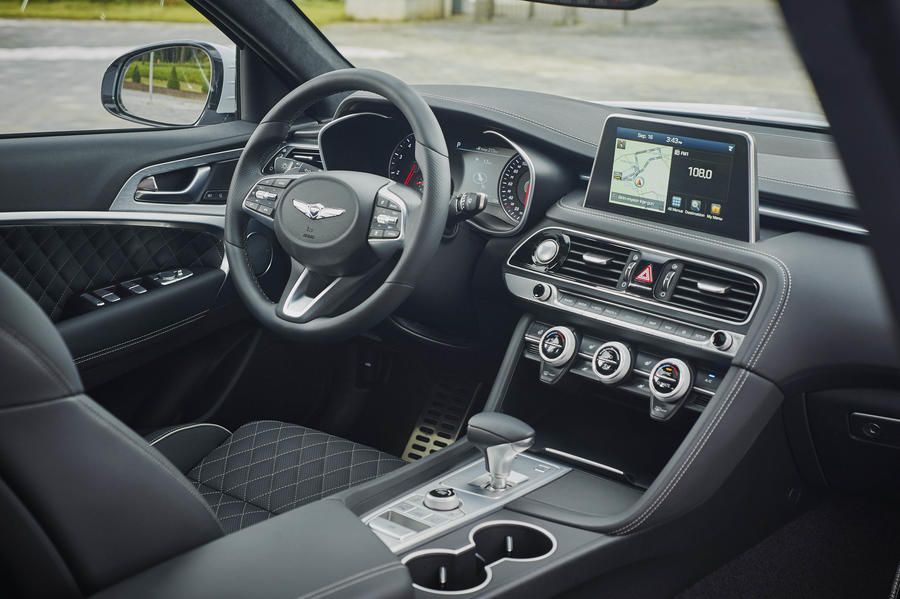 If Genesis is serious about mixing it with the premium class competition in the UK – and all indications suggest that it is - it could do no worse than to build on this American G70 model with a test programme in Britain to integrate changes that would make the saloon suit our conditions better and improve on what it already has to offer.

The G70 shows real promise in many key areas, although I suspect it is still some way from revealing its true ability. All the ingredients required to make it a convincing rival to established contenders are in place. As it stands, it is good enough to worry the likes of Audi, BMW, Jaguar, Infiniti, Lexus and Mercedes-Benz.

The real test will come when Genesis unleashes European specification models in the UK. With a little-known name, it’s going to be a hard sell. But, at the right price, it could very well upset the status quo. 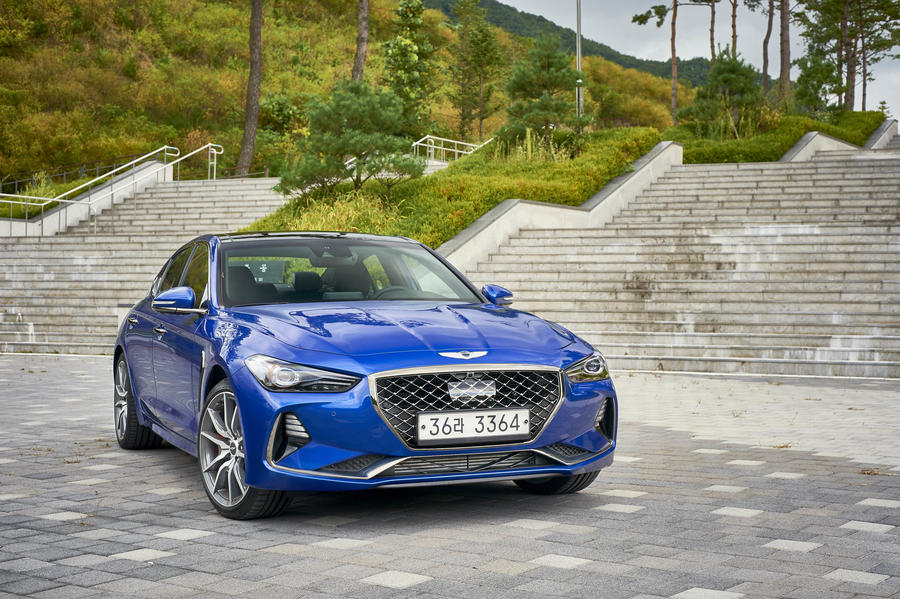 Has a nice athletic exterior

Has a nice athletic exterior design - though it's bugging me that if you put the 3-series, XE, and a sprinkling of an Infiniti / Mazda into the blender, you'd end up with this .

Given that this is Genesis' first proper attempt at a premium sporting saloon (the G80 and G90 have Hyundai roots) it is a hugely impressive effort. Other reviewers have also extolled the car's virtues, including its dynamic abilities, refinement and build. Personally I'm not sold on the front end but apart from that the G70 seems to have hit the bullseye in all the areas that count. If there were any lingering doubts about the Koreans' ability to seriously challenge the Germans in the premium end of the market this car should dispel them once and for all.
Spanner 23 September 2017

Many readers believe that Autocar would have given it its own tv chat show and 400 stars if it were a Jag etc etc....