6
Share review
First-in-its-class diesel hybrid Tucson isn't as up to date as its rivals inside, nor is it as fun to drive
Share
Open gallery
Close

The Tucson is Hyundai’s best-selling car. That’s little surprise, since it’s a direct rival to the Nissan Qashqai. It’s the same width and height, and a hand’s width longer. And, following a facelift, the styling of the two cars are now pretty in line with each other.

Sales are growing, and Hyundai has sold more than 600,000 Tucsons now, although the Qashqai sells more across Europe. The Qashqai even took the Tucson’s title as Ireland’s best-selling car last year — its only European top spot, after the Tucson hed that title for two years.

As the industry moves towards full electrification, Hyundai sees itself as a leader in this area. Across the Hyundai and Kia brands, there are 16 electrified cars planned by 2025.

This model is one of these. It’s a Tucson with a 183bhp 2.0-litre CRDi diesel engine, and a 16bhp, 0.44kWh 48V hybrid system easing the stress of the diesel unit for claimed fuel economy and emissions improvements of 7%. It’s been introduced as part of a subtle midlife refresh that, thankfully, doesn’t change the Tucson’s handsome styling. The plain 2.0 diesel of the pre-facelift car will no longer be offered alone, with a 1.6 diesel taking up the slack.

It’s a system that’ll make it into the Kia Sportage, as well as the Santa Fe, in the next 18 months as Hyundai and Kia move to electrify their ranges. For now, though, this unit acts as the top-spec powertrain in the Tucson, with prices starting at a little more than £32,000. 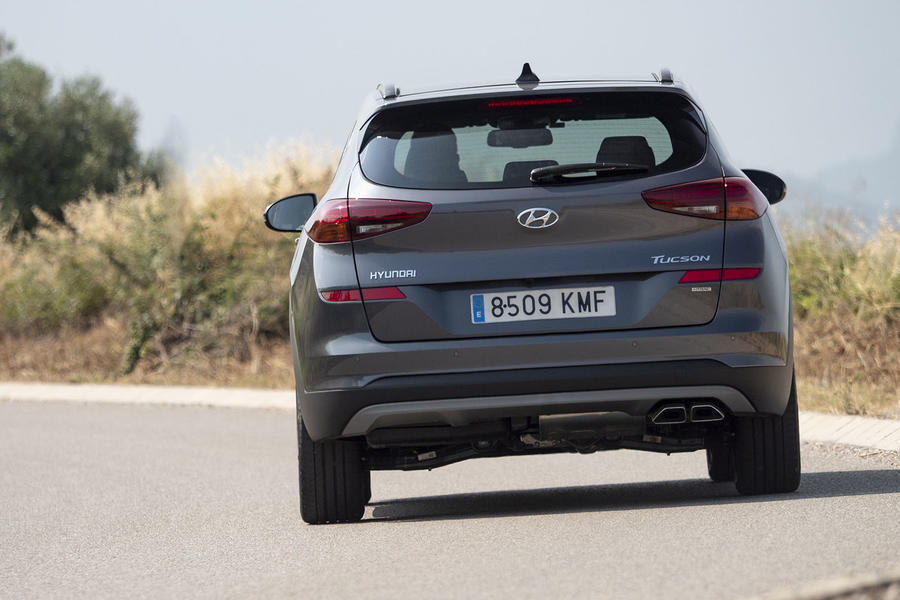 Subtle. The mild hybrid system is slickly integrated and laymen could be forgiven for thinking that the car is a regular 2.0 diesel until the batteries’ extra heft gives the game away around corners.

Take a corner quickly and the Tucson shifts its weight palpably to the outside wheels, while the car’s soft suspension, comfortable though it is, makes the car lean over. It’s here that the seats could use some side support, since only drivers unencumbered by extra pounds will manage to stay comfortable in that lean. Out of the corner, the car jerks back vertically like a bobblehead toy.

Sadly, the steering wheel communicates nothing when cornering and is disconcertingly light, with a delay between steering and moving making the Tucson feel like a far larger, lazier car than it actually is. Sport mode makes no noticeable difference, either.

The engine doesn’t complain much when driving regularly, but feels a little breathless under heavier acceleration and uphill. The torque of a plug-in hybrid would have come in far handier in these moments. A slightly more engaged gearbox would take away that mild wince when you’re waiting for an upshift that won’t happen quickly enough.

Inside, a light refresh has kept things feeling reasonably modern, although the Santa Fe, launched on the same day, shows what the next-generation Tucson’s interior will look like in three or four years.

Perhaps the most dated feature is the steering wheel. It’s not as nice to touch or look at as Hyundai’s sleeker version and, as the part of the car most touched and used by the driver, sets a less-than-crisp tone across the interior.

Still, Hyundai has delivered where promised, with a greater use of soft-touch plastics across the top of the dashboard. 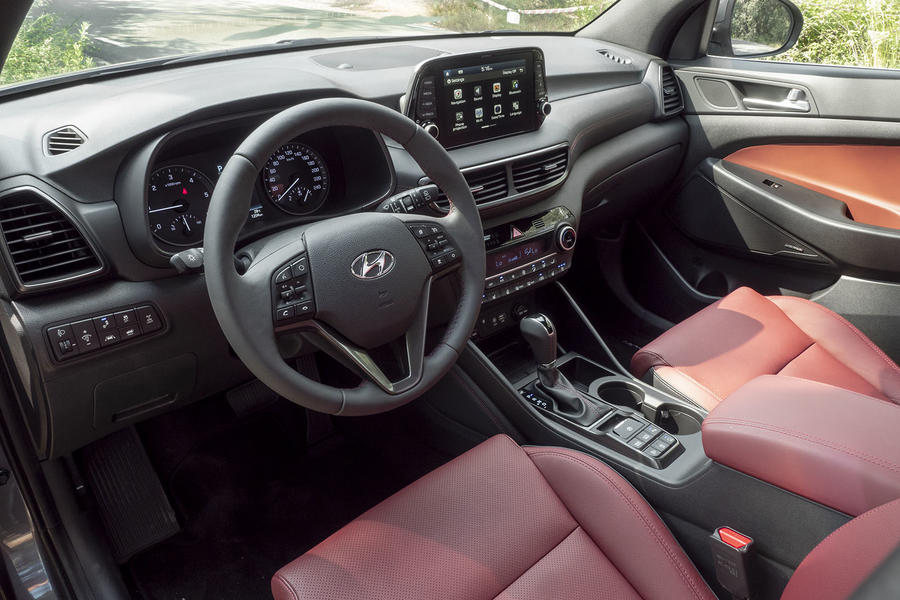 It’s a car that, despite the modernity of its powertrain, has aged more quickly than rivals. And, despite a facelift, the Tucson still feels a little geriatric. In this class, it’s towards the bottom end for being fun to drive, outgunned by the Qashqai and Seat Ateca, as well as the class newcomer, the Skoda Karoq.

Hyundai says that it’s the first diesel-electric hybrid in the segment. This should do it some favours in the eyes of customers, but first in class this time doesn’t equate to best in class. Most mid-sized SUVs in this acutely competitive segment are at least 90% as capable and are available for less money. 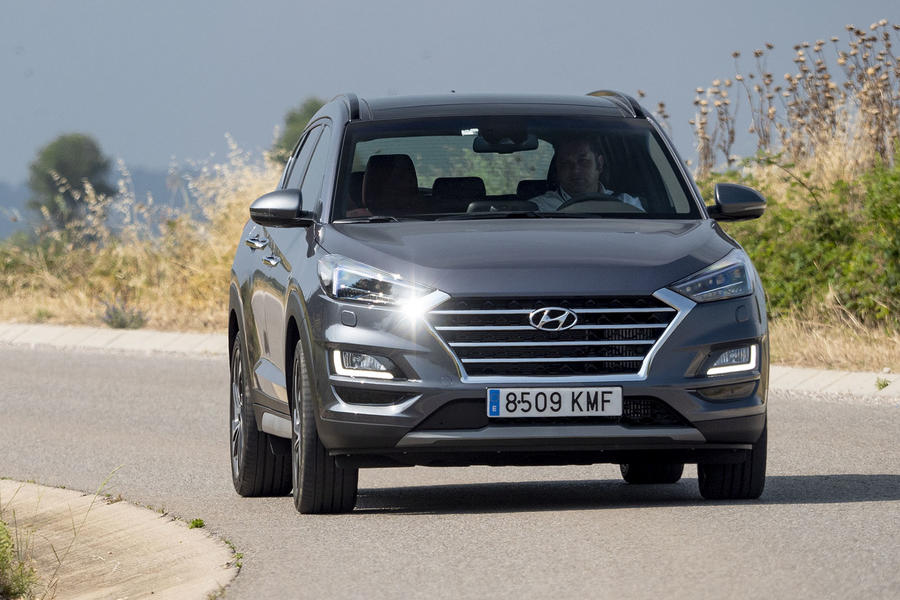 Maybe next time Hyundai will give Autocar the 400 horsepowere model with 20in wheels, then it can expect the full 5-star test treatment!

Of course the review should have concentrated on the merits or otherwise of the hybrid system, since this is the bit that's new. But what's the point comparison with the now deleted non hybrid diesel when buyers will be more interested in how it fares against rivals, and the smaller diesel?

Actually i think this may be the first time a manufacturer has offered a mild hybrid compression ignition engine - in fact so mild that it's 440 watt hr battery is smaller than that fitted to many electrically-assisted bicycles!  I can see the obvious attraction to a manufacturer: the single starter motor generator and small battery is cheap to make, yet powerful enougn to reap benefits in official test figures and padd out the torque curve at low revs when the engine is off boost.   Plus of course, it meaans that they can attach a "Hybrid" badge on the back...

No its not - PSA offered a diesel electric hybrid (electricity powered the rear axle) until a few years back.

The only sensible hybrids are diesel ones, but sadly not this one - they should have used the smaller, lighter 1.6, a more powerful electric motor and a bigger battery.

Surely the point of hybrid's is to downsize the combustion engine and use the initial shove of the electric to maintain (or even improve) real world performance in most situations. Meanwhile the CE prevents range anxiety (unless you fit an absurdly small tank like BMW)

Surely the point of hybrid's is to downsize the combustion engine and use the initial shove of the electric to maintain (or even improve) real world performance in most situations. Meanwhile the CE prevents range anxiety (unless you fit an absurdly small tank like BMW)

Exactly, that was the point I was making.

The PSA one was a full hybrid, with large battery pack and powerful electric motor. But this arrangement, while promising a great deal, was very heavy and very expensive and ultimately has not been successful. The mild diesel hybrid produced by Hyundai uses a low power elecric motor and small battery to achieve much more modest performance / economy / emissions benefits, but crucially it is very light and cheap (even if this is not fully reflected in the car's list price!).

The PSA one was a full hybrid, with large battery pack and powerful electric motor. But this arrangement, while promising a great deal, was very heavy and very expensive and ultimately has not been successful. The mild diesel hybrid produced by Hyundai uses a low power elecric motor and small battery to achieve much more modest performance / economy / emissions benefits, but crucially it is very light and cheap (even if this is not fully reflected in the car's list price!).

Really ? I dont remember it being that powerful or the electric range being that great.

Well, the combined output was 200 horsepower and it was capable of short distance fully elecric running which mild hybrids can't do; also CO2 output was below 100 gm/km. In short this was a different proposition to the Hyundai mild hybrid.

PSA tried it but have all but dropped it.  An article in Autoexpress regarding the DS path stated "The switch to a petrol-electric hybrid means that PSA’s existing diesel-electric set-up now has a limited shelf life. “It will die in 2019, when the new plug-in tech becomes available,” said a senior PSA source".

Oh dear, maybe you should tell all the manufacurers that are about to start making them ?