From £166,1807
Ferrari's new entry-level model arrives in the UK for a tough test of its versatility
Open gallery
Close

If you already own a Ferrari, the Portofino probably isn’t for you.

This isn’t a question of brand loyalty but of simple statistics. For every ten people who bought the old California, just three were repeat customers for Maranello. The others were lured in fresh – from Mercedes, Bentley and Aston Martin – by a car more useable than the mid-engined F430 Spider but less cripplingly expensive than the V12-powered 599 GTB.

And it still was a true Ferrari – at least according to the Scuderia shields. The truth is that while the California broke new ground, it won’t go down as a legendary drivers’ car, being too soft and substantial. More of a legendary seller. Along with its turbocharged update, the California T of 2014, these cars were made and sold in greater volumes than any other Ferrari in history – and fired up twice as often by their owners, apparently. 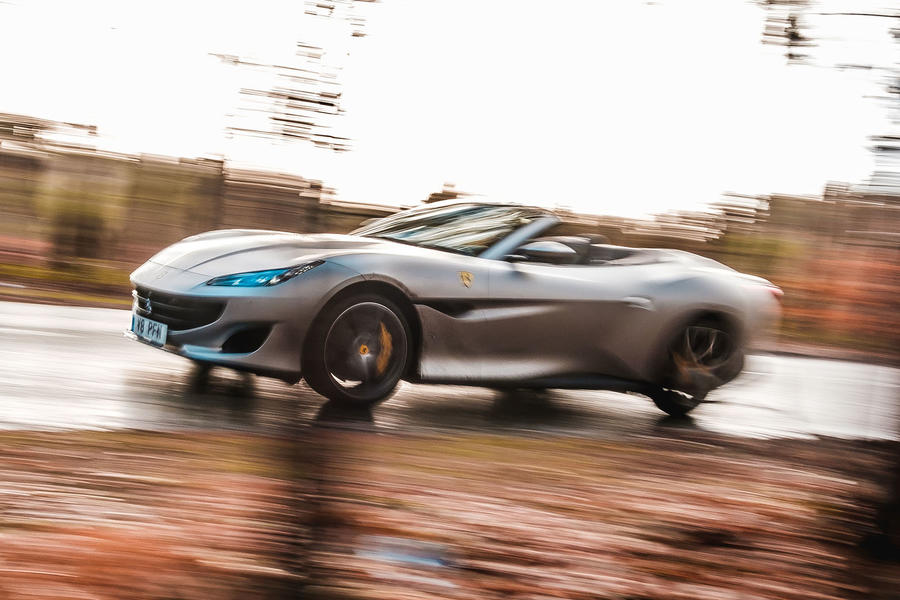 So the Portofino, Ferrari's new entry-level model, will look to repeat that trick of drawing in first-time buyers, and, naturally, it follows the same logic as the California. The 2+2 layout remains, although the rear perches are more useful for carrying a pair of soft leather duffel bags than one’s friends or family, unless they happen to be small children. Still, there are four seats if you need them. There’s still a retracting metal roof, though even Ferrari couldn’t manage to shave any time off the California’s class-leading 14.0sec robotised dash. The interior, still recognisably Ferrari, is somehow less intimidating than for the Portofino’s stablemates. The new, 20%-lighter seats look – and are – comfortable for even very long stints. So far, so approachable.

But the vibe has shifted. The Portofino’s body-in-white is a third stiffer than that of its predecessor, its suspension mounts are half again as rigid and Ferrari claims 80kg has been saved through, in order of increasing magnitude, the engine, electronics, exterior, interior and chassis. The new electromechanical steering also 7% quicker than the hydraulically assisted set-up of the California T, which itself was 10% more acute than the California’s. Think about that for a moment. The spring rates are also up considerably: 15.5% at the front and 19% at the rear. It all points to something of a personality transplant. 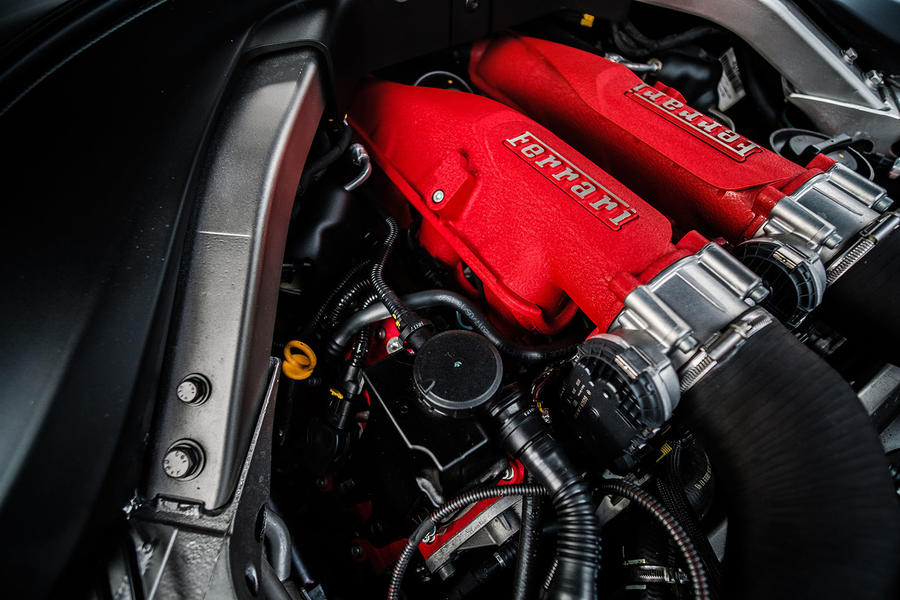 The Portofino is faster than the California T, too. Of course it is, hitting 62mph in a bewildering 3.5sec and going on to nudge 200mph. The only engine available is the same twin-turbocharged 90deg 3.9-litre V8 that's carried over, but Ferrari has fitted new pistons and conrods that increase combustion pressure and there’s now a modular turbo manifold that puts the exhaust pulses to better use.

There’s also a new intercooler and exhaust, while the engine breathes more deeply thanks to bigger-bore intake pipes. At 82.0mm, the stroke is marginally shorter than that of the closely related engine in the excellent 488 GTB, and the displacement is commensurately smaller, but both use a flat-plane crankshaft and are dry-sumped. Peel up the featherweight bonnet and you get the same theatre, too. Framed with aluminium strut braces, a pair of livid wrinkle-finished cam covers greet you from a place reassuringly far behind the axle line. 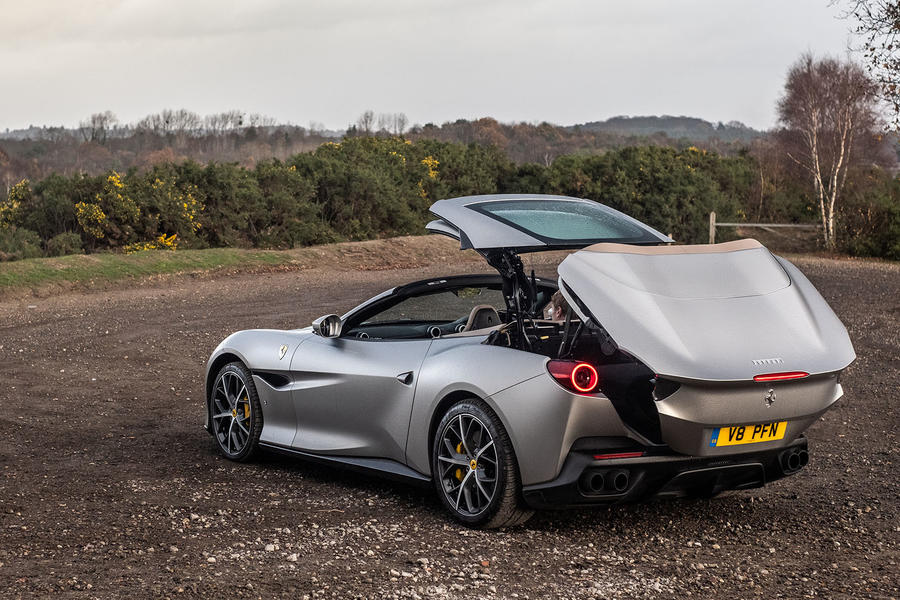 Looks are subjective, but we reckon the less bulbous Portofino is also much prettier than its predecessor. The bottom-feeding front bumper may ape, a little gormlessly, that of the Mantis-esque 812 Superfast, but the overall proportions could draw crowds. We said so on the car’s launch in Italy last year, but even on a horribly soggy day in Surrey, there’s no denying that Ferrari has condensed the classic silhouette of its V12 flagship into a muscular fastback.

Since parting ways with Pininfarina after the F12 Berlinetta, the firm hasn’t achieved the same level of elegance it once did, but the Portofino’s deliciously crisp trailing edge subtle buttresses atop the rear deck show improvement. Let’s put it like this: Ferrari says the Portofino is inspired by the 1968 Daytona, and with the roof up, you can just about see that. If you squint.

So, how well, once you’re inside, does the everyday Ferrari work on a particularly everyday kind of day? Perhaps today is even too everyday. It’s wet, but not to the extent that one dare not drive with any conviction. In line with Ferrari policy at this time of (an unseasonably warm) year, this car’s forged 20in alloys also wear Michelin’s Pilot Alpin winter tyres. Moreover, we have a fair bit of photography gear to bring along from Autocar’s road test base in South-West London. In any other Ferrari (okay, perhaps in the £240,000 GTC4 Lusso) we probably wouldn’t bother. It would be easier and, given the more occasional pattern of use, more relevant to wait for a nicer day.

But this is the whole point of the Portofino, so let’s get on with it. The first thing to note is that while a Daytona may attract more amorous glances from the kerbside, it wouldn’t see which way the Portofino went. It might hear it, though. This engine now makes 592bhp and 561lb ft, the latter daubed generously across the midpoint of its 7500rpm span, and it’s a masterclass in tuning. Ferrari doesn’t mount the IHI turbochargers inside the valley of the cylinders, but you’d swear there’s less lag here than for many engines that do.

In Sport mode, the response and full bellowing breadth is staggering, and the delivery is progressive enough for one to explore, when the chance arises, its upper reaches and fully exercise the long throttle travel. In Comfort, the show quietens down to the extent that remaining incognito isn’t as difficult as you would expect.

Ferrari says it applied the damping characteristics from the 488 GTB to the Portofino, and once you really get going on British roads, there are sporadic traces of the mid-engined car’s brilliance. Through sharp troughs and over unexpected crests in particular, the transition from bump to rebound plays out with the grace of a perfectly executed baton exchange between two sprinters. Body control is uncanny, even at the extremities of the suspension’s travel (which, to be fair, isn't exactly generous), and with steering this quick, it helps dart the Portofino into corners with ravenous hunger.

It's truly impressive, but it's harder to appreciate when the bulk of the car’s genetic make-up is supposedly grand tourer. It is, if you want to use the versatile Portofino to its fullest, Ferrari's mistake. Even on a motorway, rarely is there moment where you aren't consciously repositioning the car between the white lines, so sensitive is the steering only a degree or two off-centre. Neither does the car’s rear axle cope so deftly as the front does with the twitchy, quick-fire direction changes that steering elicits. Upping the ratio of the rack would hide the effect to an extent, but the raised mass of the roof mechanism generates a nervous oscillation that has you questioning the rear contact patch (this is nought to do with the winter tyres).

Nail the Portofino through corners and you’ll force it to adopt a well-balanced squat, with Ferrari’s latest e-diff harnessing the power of the engine and providing massive, ferocious drive out the other side, but a car like this needs to resonate better at a gentler tack. Bumpy Road mode slackens the suspension and keeps the powertrain, steering weight and stability control on­ alert, but even this magic button can’t bring the Portofino into that all-important easygoing sweet spot. It’s nigh-on as taxing to drive on the road as the 488 Pista.

The scale of Ferrari’s legend and the scintillating quality of its more recent mid-engined wares mean people will accept a less-than-perfect product to feel part of the story. And that Maranello, in creating the Portofino, has given its ego a lengthy tether will play to that.

A riotously loud drop-top so quick and responsive sounds exciting, and it is exciting, but the Portofino feels like a supercar imprisoned in the swollen body of a topless grand tourer. It doesn't seem to know itself as intimately as the slower, heavier, less capacious but finer riding and more sweetly fluid Aston Martin DB11 Volante. Ferrari should remember that not everybody’s commute resembles the Raticosa Pass. 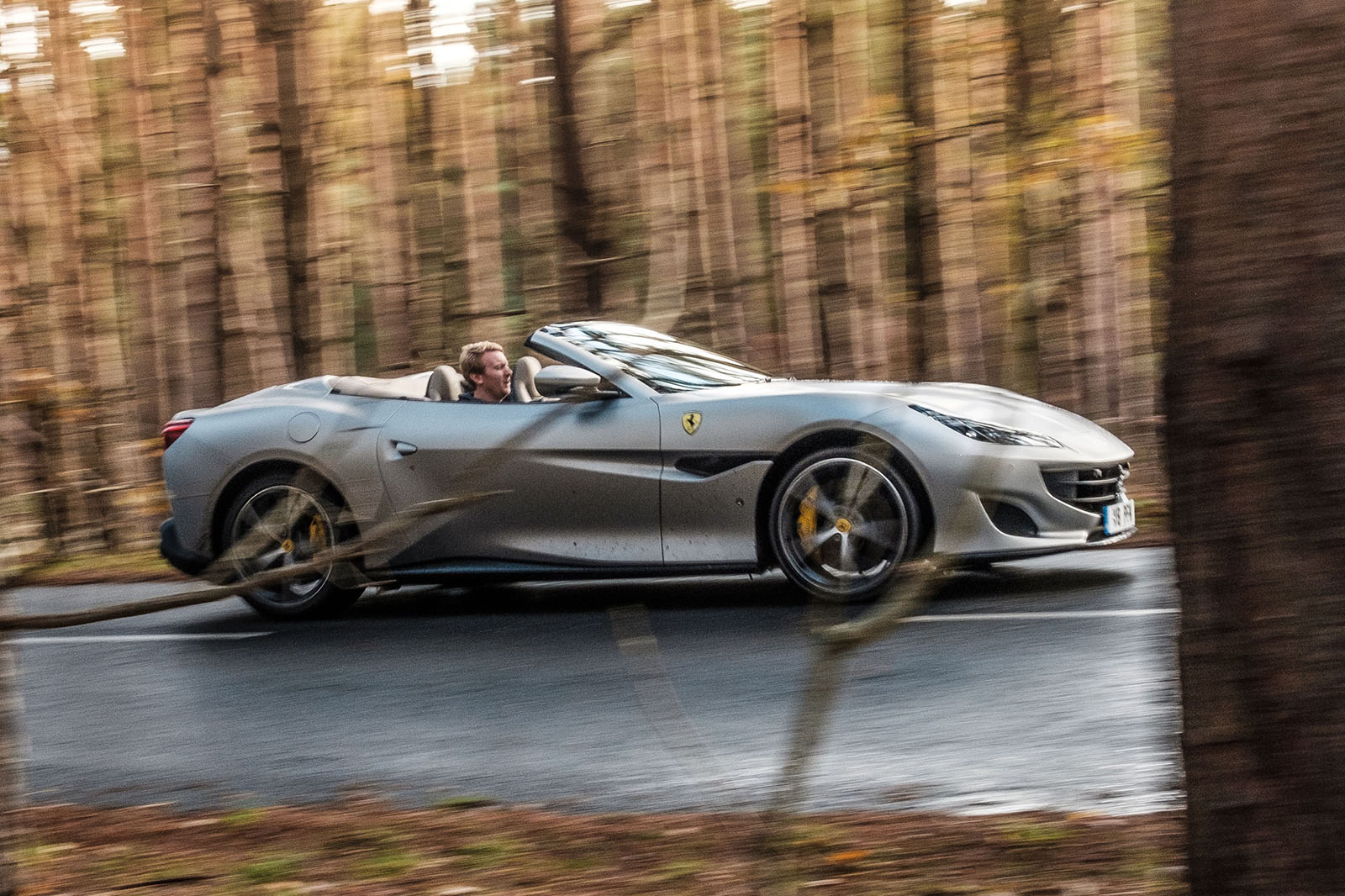 I’d rather have a new 911 convertible and a lot of change to go touring around Europe in it.

Nice idea Beastie_Boy, not sure the Portofina brings enough 'drama and theatre' to the daily driving experience to justify the price point. Sure, less Vanilla than a 911 cab, but doesn't justify the price differential in my opinion. 911 cab all the way.

If only it had an Aston badge... or a McLaren one. Seven stars :)

If only it had an Aston badge... or a McLaren one. Seven stars :)