The Pure is the entry-level Alpine A110 – not that this should put you off in the slightest. In the world of thoroughbred performance cars, the simplest variation is so often the sweetest. Just think of the Porsche 911.

And that could well be the case here. Alpine’s first new car since the A610 of 1991 needs no introduction, suffice to say that when the all-aluminium, mid-engined, double-wishboned A110 arrived last year, it did so like a grenade lobbed into the temptingly affordable sports car segment.

In fact, the little French coupé succeeded where the BMW M2 and Porsche 718 Cayman GTS couldn't when we gave it the full five road test stars. A year later, first impressions suggest not even the all-new Toyota GR Supra, reborn with plenty of BMW hardware, can topple it, although only a direct comparison – due soon – will tell us for sure.

The changes for the Pure are subtle. For a start, it’s only a trim level, because Alpine needs to hold something in reserve for more hardcore versions of the A110 further down the line. There is, however, enough to distance this car from the more luxurious, grand touring-focused Légende at the top of the range.

The most significant among them is the move to 17in wheels, which are inch smaller in diameter and lighter than on a typical A110. Ride quality isn't normally a problem, but if the reduction in unsprung mass gives the Pure even better body control, it would improve the recipe. An even more pliant ride on higher-profile tyres wouldn't hurt, either.

Then there are the one-piece Sabelt sports seats, which with quilted leather and deep bolsters look heavier than they are – just 13.1kg apiece. You might recognise them from the Premiére Edition, but unlike that model, the Pure does without Brembo brakes and an active sports exhaust. Both can be added, however, for £936 and £1380 respectively. 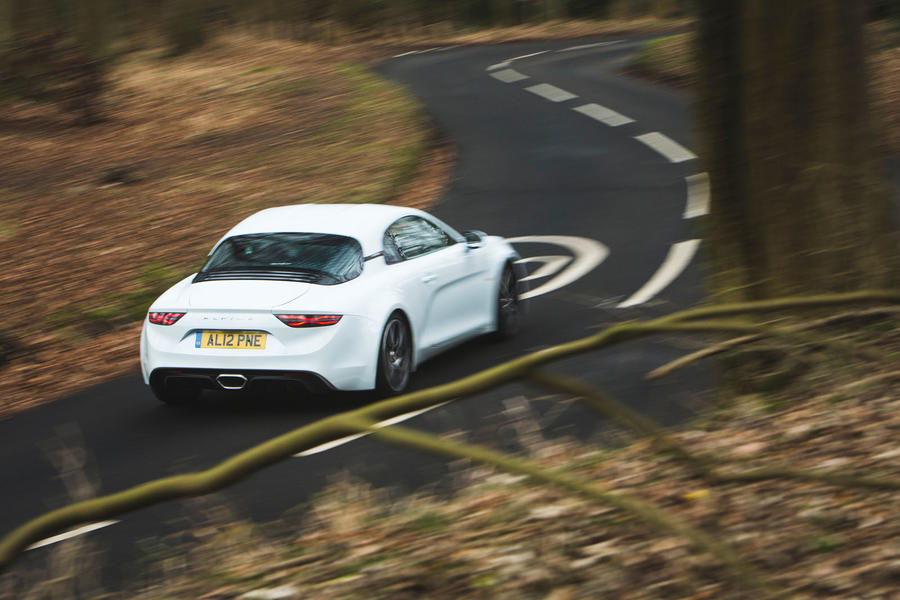 To drive, the Pure is just like any other A110. Almost identical, in fact. Alpine couldn’t resist fitting the example tested here with optional 18in wheels, so we can say neither whether the smaller items the Pure gets as standard issue improve pliancy and body control nor whether the additional sidewall blunts turn-in response.

That said, the gentle spring rates, a light body and highly articulate suspension continue to deliver a truly special driving experience – one that distils communication and adjustability down to potent concentrations. Weight transfer across the rear axle can seem exaggerated compared to that of the 718 models, but you’re never in doubt about just how much grip the Michelin tyres have left in them, and the A110 is ultimately the more confidence-inspiring car. In a fast, fluid and effortless natural flow is how it wants to be driven, and you'll find yourself obliging it at any opportunity.

There’s plenty of head and leg room inside this two-seater, and the body-coloured doorcards, toggle switches and smatterings of carbonfibre and Alcantara do enough to keep the place interesting and draw your attention mostly away from the cheaper plastics, which aren’t hard to find if you go looking. The shift paddles still feel cheap, mind.

What it doesn’t feel is spartan compared to more expensive A110 models, and although the seatbacks are fixed, they’re certainly comfortable enough for longer stints at the wheel. Granted, the Légende offers a choice of brown leather and you can have the carbon in a gloss black finish rather than matt, but it’s all trivial stuff, because any A110 is surprisingly quiet and relaxing on the motorway. 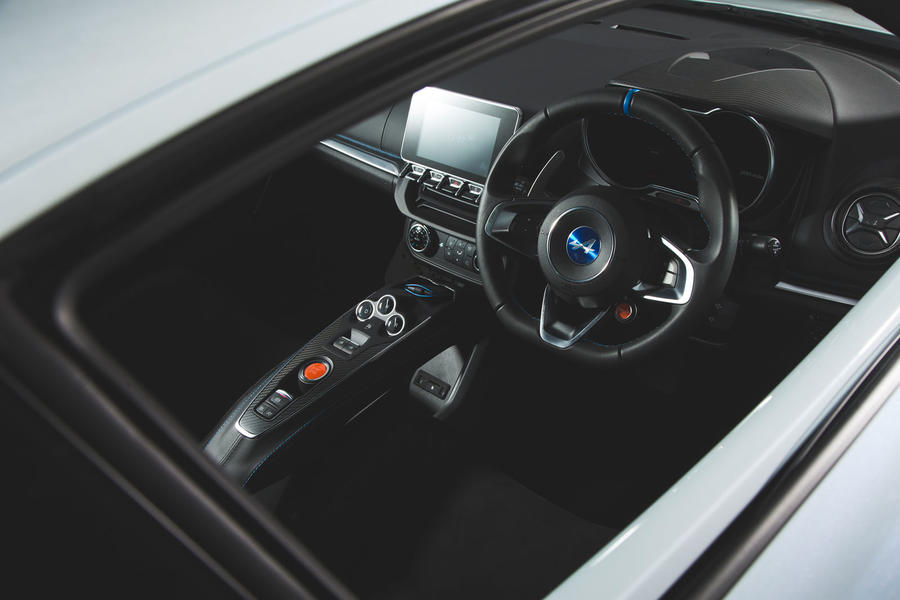 Those holding out for a road-racing version of the A110 will need to wait a little longer, because the Pure isn’t that car.

But anybody simply wanting to scratch a sports car itch should put the Pure at the top of their shortlist. When you consider the modest volumes being built and the thoroughness of the engineering, the A110 is good value even at £50,000, and the Pure is usefully less expensive. Mind you, the entry-level 718 Cayman is cheaper still and a more focused device, although no more compelling for it.

What you do about options on the A110 is a matter of personal taste. There’s something charming and authentic about an Alpine without a sports exhaust, big brakes or wheels bigger than necessary. Straight out of the box, the Pure is also the only A110 that sneaks under 1100kg, which is supremely light for a turbocharged car with a dual-clutch automatic gearbox and no structural carbonfibre.

We'd be tempted to add the Brembo brakes, but elsewhere the Pure retains climate control, Bluetooth, a brace of USB ports and sat-nav, so it’s not by no means an amenity-free zone. You don't get parking sensors, but anybody who needs those in something so dainty needs to have a word with themselves.

In the end, there's even more to come from the A110, and the Pure is merely nod in that direction. Some nod, though. 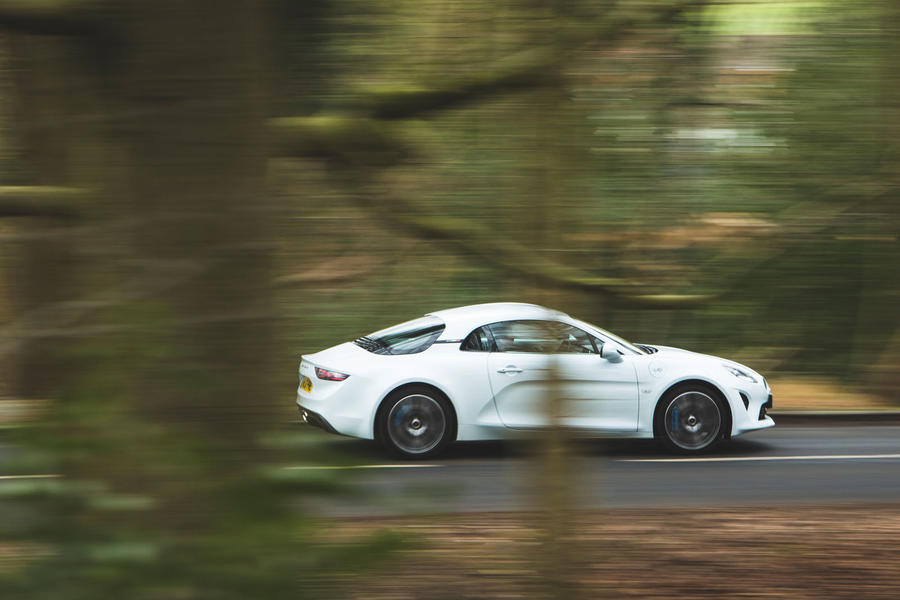 Still not a £50K car though, then again Porsche and the like have been getting away with more is less and charge er more for their cars.

So the big difference dynamically is the wheels

But then Renault sent the car out with the bigger wheels.

I have a different problem with the price

Not the first time Autocar has been guilty of this.

The difference is not a sum you’ll find down the back of my sofa.

31 May 2019
Looks great, promises a great drive as well. Hope the exquisite curved rear glass window brings back the stylistic feature of curved screens (windscreen as well) which for whatever reason has all but disappeared.

Agreed, there was really no point in testing this car with the optional 18in wheels. Surely Alpine could have supplied?

Regarding value, I'd say that given the design and development costs, aluminium contruction and low production numbers, an asking price below £47,000 represents something of a bargain. Lotus asks £42k for the most basic version of the Elise (effectively a 20-year old kit car without a proper roof) by way of perspective.

What on earth does this mean?

Lust at a distance

Pity this car is not available in the United States, as I am totally smitten with it based soley on reviews and photos. It sure seems like something I would purchase if given the opportunity.

The dealer that sold me my

The dealer that sold me my Pure said they've only had one other order with 17s - customers are almost invariably going for the 18-inchers instead. I think that makes mine very likely a unique order - 17s and comfort seats, the latter were only available on the Pure briefly.

Bit confused about the model

Hi. I love sports car. I have addicted of it. I could not able to understand the model and its configuration. Thanks. Srikant.