BACK TO ALL TOP 10s
Currently reading: Top 10 best affordable sports cars 2021
UP NEXT
City cars

Never has the choice of sports cars at the affordable end of the spectrum been greater, each offering thrills to match and in some cases exceed those of more expensive peers.

It's not all about brake horsepower at this end of the market: most of the cars in our top 10 list put driver entertainment ahead of raw, straight-line performance. But we guarantee each will put a huge smile on your face on way or another.

Every significant component part of the Alpine A110 driving experience – from the rasping turbocharged torque of its engine to the hilariously immersive poise and panache of its handling – is all about the F word: fun. It brings to life journeys and roads that rivals wouldn’t, and has handling for which your affection can only grow as you explore it more closely.

Anatomise the car and you won’t find too many mechanical ingredients or areas you could genuinely call exceptional; but put them all together and you can’t help but conclude that the A110 is a much greater car – and achievement - than the sum of its parts would suggest. The subsequent arrival of the A110 S has only confirmed that, which has seen power for the car rise to 288bhp and firmer suspension and bigger brakes fitted; and yet it's the basic A110 which remains the sweeter, more involving machine for road driving.

Rarely does a car come along so devoted to driver involvement, and so singularly effective at it, even among affordable sports cars; the last time was probably the Toyota GT86 in 2012, a car to which we also gave a five-star recommendation for its supreme fitness to the purpose of sucking the marrow out of every mile. The A110 is quicker, more agile, more effusive and ultimately even more fun. It deserves no less of an ovation.

Save money with new A110 deals from What Car? 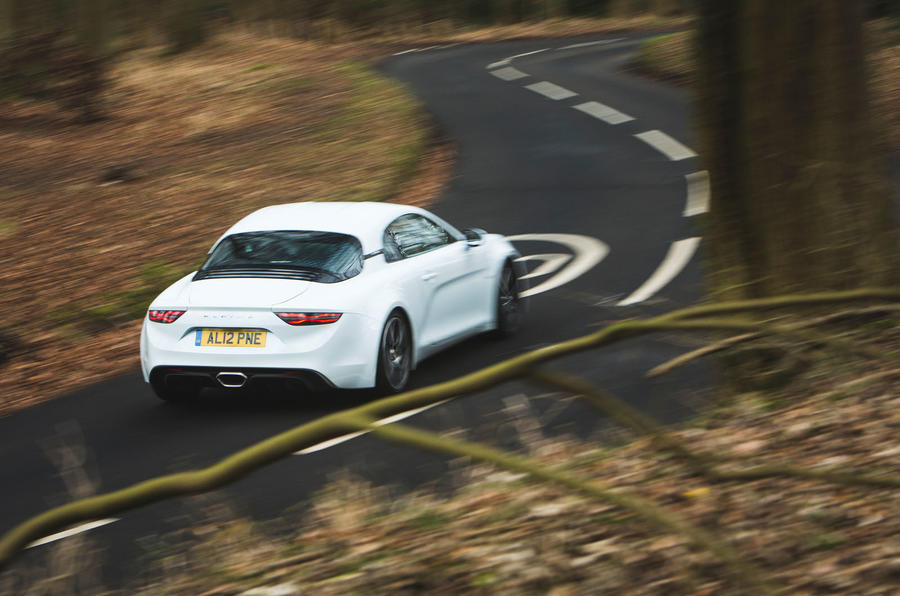 Even with its downsized four-cylinder turbo petrol engine, the 718 is by some distance the most complete mid-engined sports car on sale. Misgivings about the way the car's crank is now turned have been voiced from plenty of quarters since 2016, and have now been persuasive enough that Porsche has returned a flat six engine to this car for range-topping GTS versions. But whether fitted with a four- or a six-cylinder motor, be in no doubt: the Boxster and Cayman have always been, and remain, excellent sports cars.

The four-cylinder 2.0-litre and 2.5-litre turbo flat fours that were pressed into service in the car in 2016 attracted particular criticism for sounding toneless; for lacking smoothness, crispness of response, linearity and operating range; and also coming up short on the purist driver appeal typically associated with Porsche. Later still, Porsche retuned the car's 2.0-litre engine for WLTP-emissions compliance and released the Boxster- and Cayman T -  whose unresponsiveness made a controversial situation worse.

However, in one of the most unexpected industry U-turns in recent memory, in 2019 Porsche reintroduced a naturally aspirated flat-six engine. It’s a superb engine by any standards, although the long-geared manual 'box it's partnered with doesn't flatter it as nearly as well as it should.

Practical, upmarket, superb-handling, ever engaging to drive, and plenty fast even in four-cylinder form, the 718 has it all - and it takes a car of once-in-a-generation dynamic brilliance to beat it.

Save money with new 718 Cayman deals from What Car? 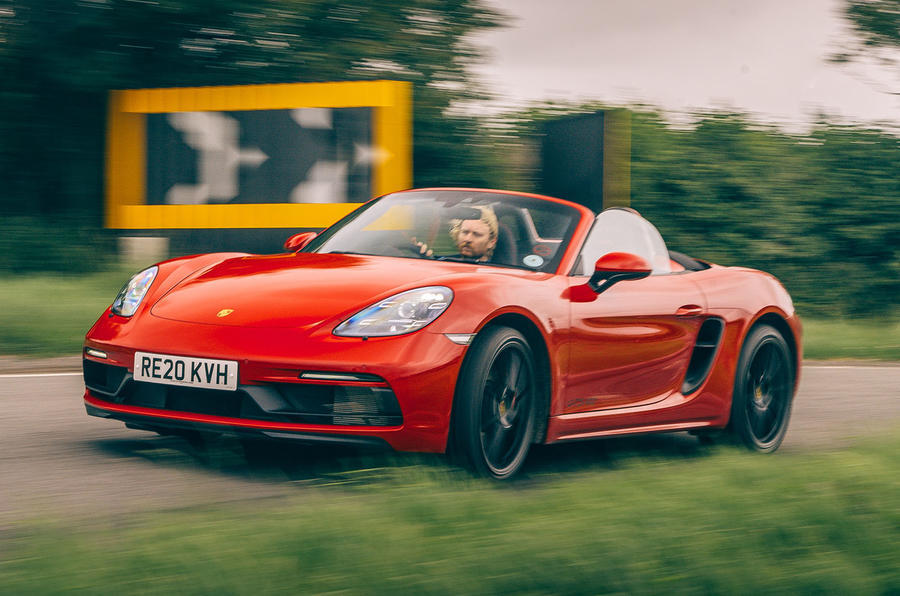 The BMW M2 Competition was the only M2 model you could buy here in Britain until the recent introduction of the extra-special M2 CS. Neither has long to run until BMW winds up M2 production later this year. When it does, what has latterly become one of the very best M cars of recent years will regrettably leave the stage.The previous model’s single-turbo straight-six was swapped out for a twin-turbocharged straight-six with proper M Division 'S'-prefixed engine code in 2018, when the M2 Competition was unveiled. Albeit in slightly detuned form relative to the larger M3 and M4 models that shared it, the engine provided sizable hikes in performance and responsiveness for the M2, while a handful of tweaks to the chassis and suspension mean it’s now even sharper and more controlled on battered UK roads than ever before. Weighty steering allows you to point the car’s nose into a corner with confidence, and handling is supremely adjustably on the throttle too.

When BMW M introduced the M2 CS in late 2019, it applied a hardcore makeover to its smallest model for the first time. The CS also became the first M2 with adaptive damping, the first with 'cup' tyres, and power shot up to an eyebrow-raising 444bhp. The car is a real bruiser brimming with muscle car attitude, and has supreme trackday handling smarts - but it's very expensive and, while compelling, isn't quite the fluent, versatile on-road performance car it would need to be in order to propel BMW to the very top of this chart.

Save money with new M2 Competition deals from What Car? 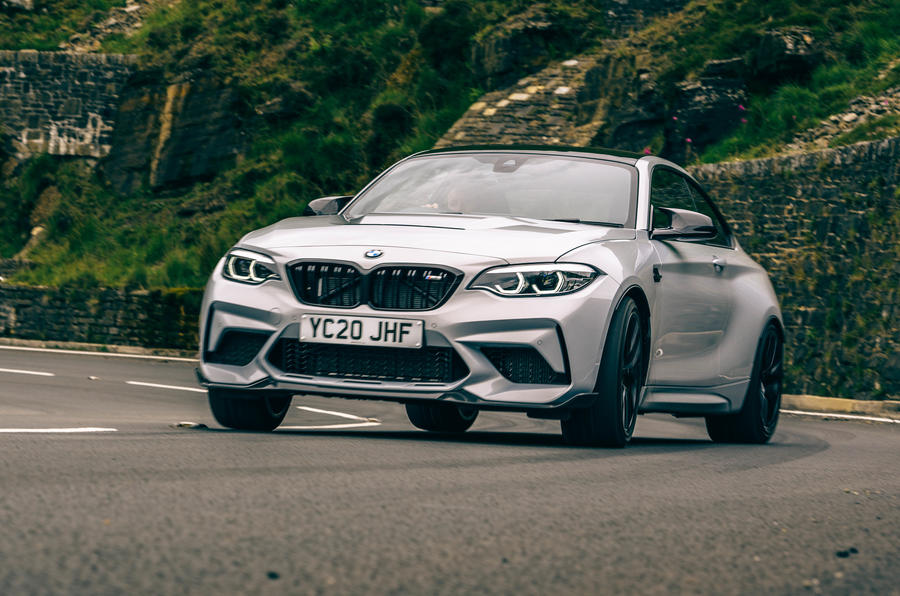 Was the Toyota Supra the most hotly anticipated new car of 2019? Quite likely. After an absence lasting some two decades, Toyota’s iconic sports car finally returned to the UK. But were it not for a collaboration with BMW - out of which the new Z4 was also spawned - it’s likely this icon would never have been reborn. As such, beneath the Supra’s striking exterior, you’ll find an engine, platform, transmission, slippy diff, electrics and plenty of switchgear all distinctly Bavarian in origin.

And yet, when it comes to driving, the Supra succeeds in carving out its own distinct dynamic identity. The suspension, steering and diff calibration are all unique to the Supra, so much so that Toyota sees the Porsche 718 Cayman - rather than the Z4 - as its key rival.

Toyota certainly isn’t pulling its punches, then. And in many ways, it’s the Supra that makes for the superior sports car. It might not be able to quite match the handling purity and balance of the Porsche, but it isn’t far off. Its ride is impressively supple, its engine is smooth and far more characterful and it’d be far easier to live with on a daily basis.

For those for whom a £50,000-plus pricetag is a little too rich, meanwhile, Toyota has lately released a slightly cheaper, four-cylinder, 2.0-litre version of the car whose handling might even benefit from the relative lightness of the smaller engine.

Save money with new GR Supra deals from What Car? 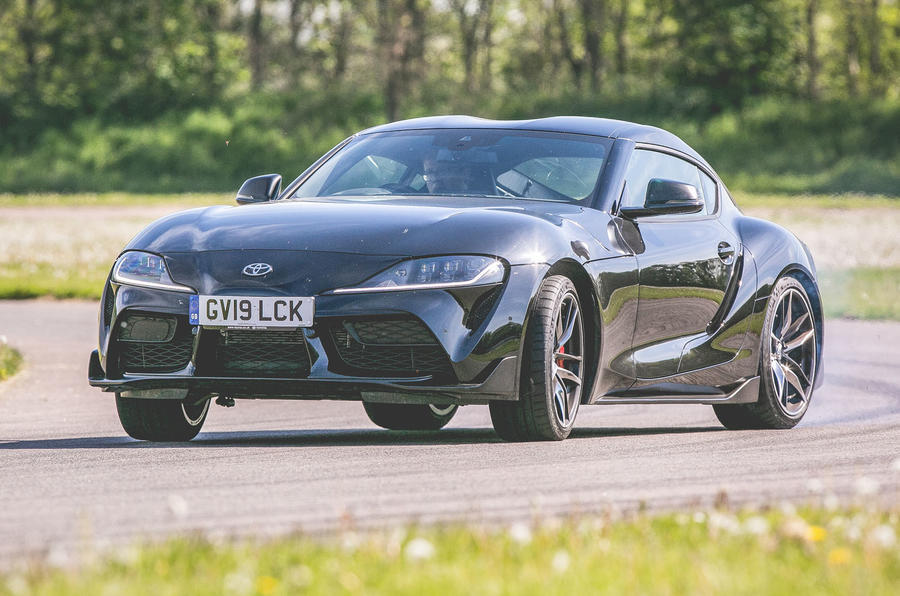 There isn’t a single area in which this new Mazda MX-5 fails to surpass its predecessor. It’s shorter, lighter, more spacious and better laid-out. It’s sharper-looking but still disarming and distinctive. It’s faster, more frugal and even more vibrant and engaging to drive.

In 2018, Mazda facelifted its iconic roadster, with the headline change being a 23bhp power hike for its fiesty 2.0-litre engine. A steering column that also now adjusts for reach was also introduced.

All that and yet the MX-5 is still every inch the same zesty and inimitable car that it was. Its character hasn’t altered at all. Nothing on this list offers a better pounds-per-smile rating.

Save money with new MX-5 deals from What Car? 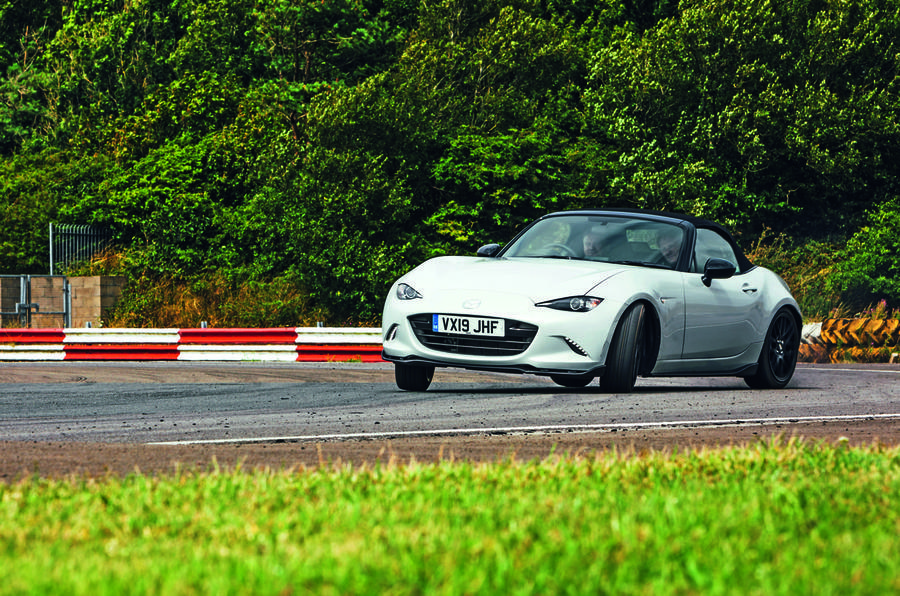 It is necessary not only to accept a few compromises with the co-developed Toyota GT86 and Subaru BRZ but also, as with a Caterham Seven, positively embrace them. They make the car what it is.

They’re visible, audible, tangible characteristics that serve to remind you that you’re driving the keenest, sharpest, most enjoyable and lovable small sports car for a generation.

Importantly, it's an accessible sports car - one that won't break the bank to run, either - and it's a refreshing alternative to the likes of the Mazda MX-5 for those seeking simple, affordable rear-drive fun.

Production of the first-generation GT86 ended in late 2019, and only the very last unregistered examples are left in UK showrooms, so act quickly if you've been waiting to buy one.

Save money with new GT86 deals from What Car? 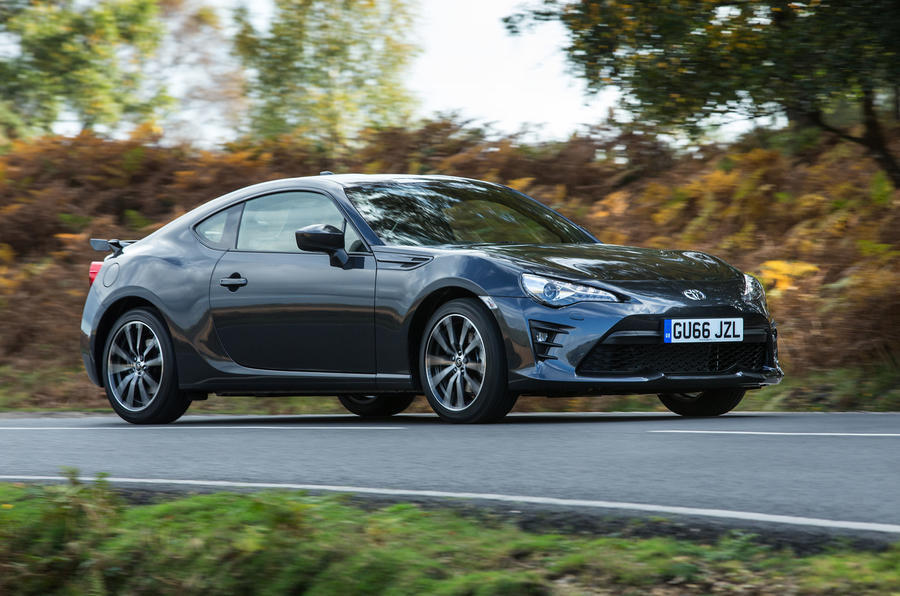 In a recent group test, the range-topping BMW Z4 M40i actually came out victorious against a lower-order Porsche 718 Boxster T. Although we concluded that it ultimately wasn’t as composed, incisive or keen-handling as the daintier Boxster, its refinement, powerful and responsive straight six engine and bruising straight-line pace won it a great deal of affection from our testers. That it also has a distinct sense of street-fighter character also weighs heavily in the BMW’s favour.

That said, the higher-order strains of the 718 still provide a purer, more enticing take on an affordable sports car. And while there’s undoubtedly plenty of scope for excitement on offer in the BMW, as a precision tool it’s still not quite as sharp as some of the lighter, smaller contenders in this class.

Save money with new Z4 deals from What Car? 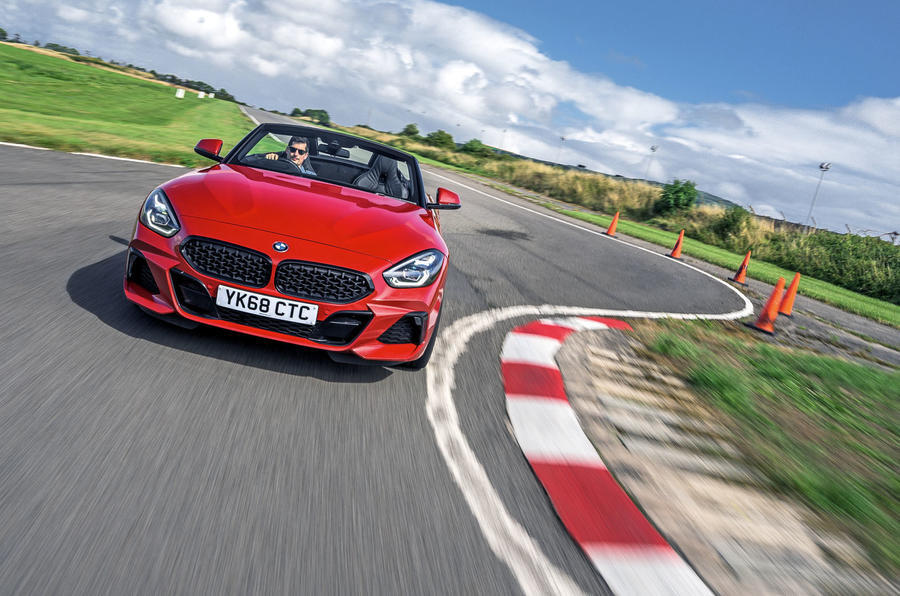 The Lotus Elise is utterly brilliant to drive if you’re in the mood. It has one of the world’s best-handling chassis and exquisite steering. But this Lotus is old and could be seen as expensive if you like to judge your cars objectively. 2021 will be the car's last year on sale, with a special edition version ready to see it off.

Yet many of the Elise’s drawbacks can be overlooked when you’re wrapped up in the deliciously analogue, tactile act of driving it. At its core, the Elise is still magnificent, and it gets better the sportier the model is.

Save money with new Elise deals from What Car? 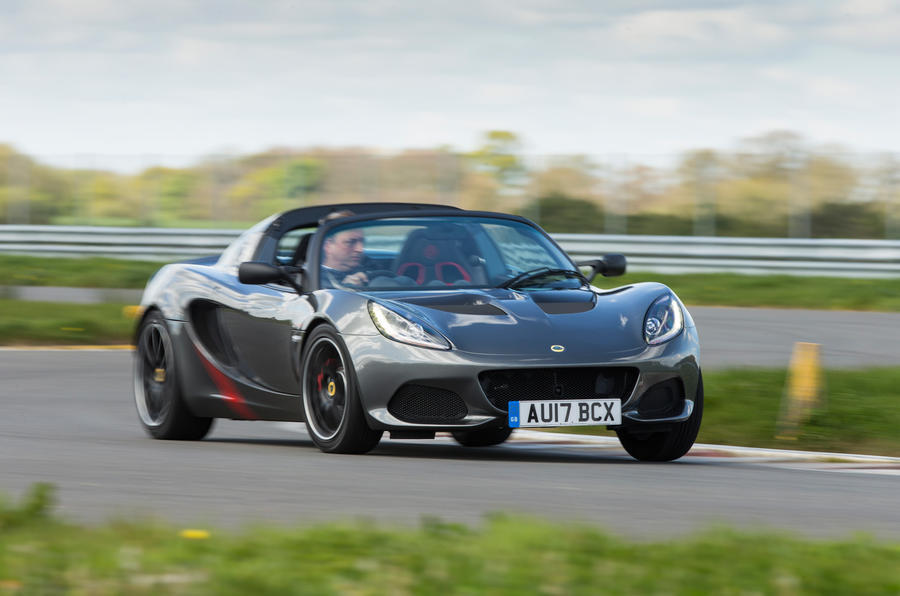 The current Audi TT feels like the response of a company that’s defended a popular car for decades against claims that it has all the style and none of the substance to be taken seriously by really keen drivers. It feels that way because it has sharpened handling responses and a lightness on its feet that eluded its forebears, as well as a range of engines with plenty of punch.

Those who want usable amusement with a dose of premium design allure, delivered for a reasonable budget, should probably consider the 306bhp TT S first, which uses the same four-wheel drive powertrain as the excellent VW Golf R hot hatchback but is considerably lower and leaner. Handling is direct and nippy, and high speeds are easy to maintain - although they still don't come with as much outright driver involvement as you might like.

Save money with new TT S deals from What Car? 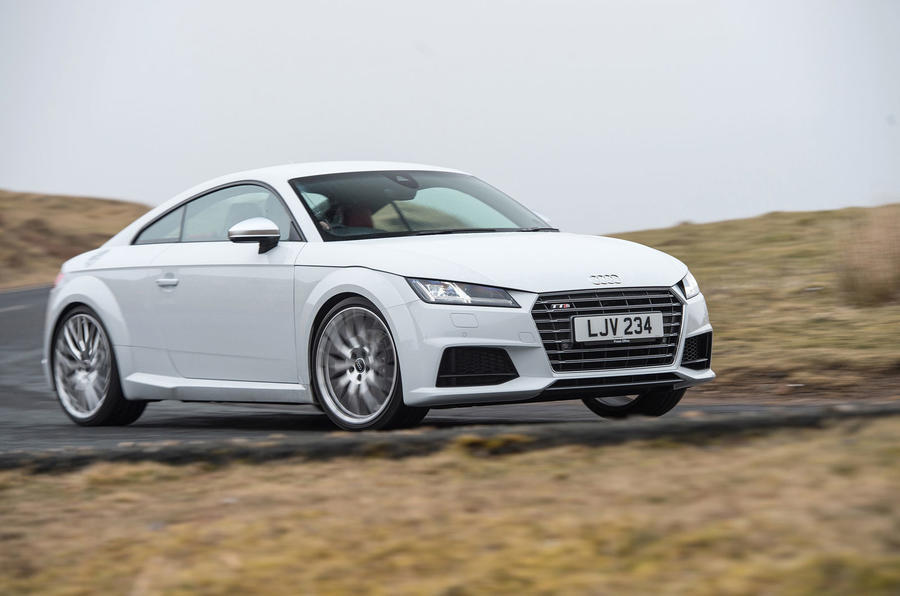 The sensible thing to do would be to buy an Audi TT or a BMW 2 Series Coupé, wouldn’t it? And if you did, that would be a huge shame.

Yes, this car does have significant drawbacks in the UK. Yes, you do have to think twice about where you’re going to park it in town, as well as factor in the far greater number of visits to fuel pump than your peers make, but no other car at this price – or several price points higher – can do what the Mustang does.

Its powertrain brings with it an appeal that engines with fewer cylinders simply cannot, and its inherent chassis balance is pretty peachy. Sensible be damned.

Save money with new Mustang deals from What Car? 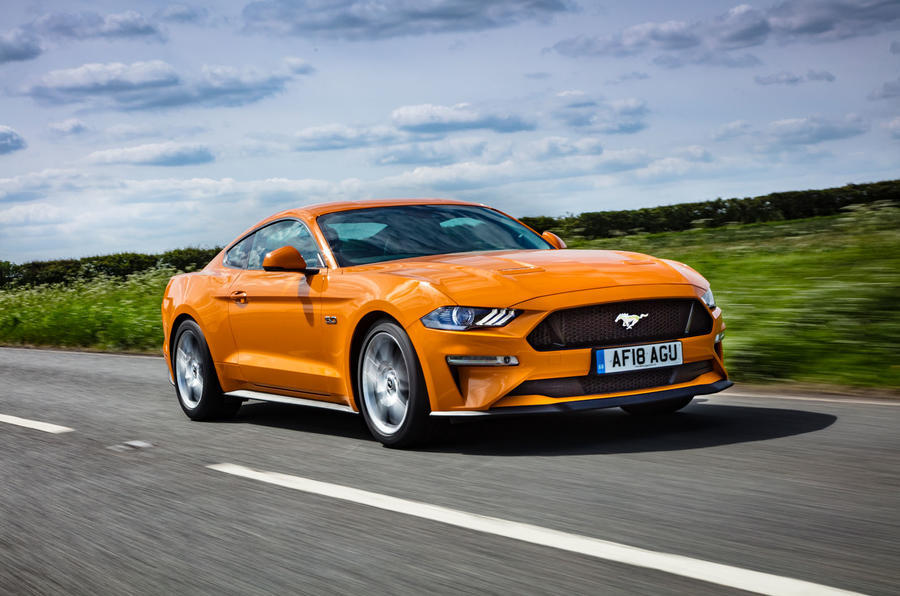