From £49,00510
Alpine's A110 comeback car manages to be both fun and interesting on UK roads at almost any speed
Open gallery
Close

If you’ve read and fully digested Matt Prior’s dispatch from the launch of the A110 last year, you already know just how special a car Alpine has built.

What you’ll read here is an interim report between the car arriving for the first time in the UK and a full Autocar road test. It’s during the latter, spread over 10 pages in the magazine, that the A110 will be subjected to the rigours of road and track both bone-dry and treacherously sodden, to stopwatch, telemetry and noise-monitoring gear, and finally to the views taken by several road testers. We will discover whether it’s good for the five-star verdict early impressions suggested.

What makes the prospect so exciting is that five-star cars are generally rather more expensive than most people are prepared to spend. At around £50,000, you could say the A110 also falls into that category but, for many, it won’t — it’ll be mouthwateringly slap bang in the middle of toy territory.

So let’s quickly remind ourselves what an A110 actually is beyond a vividly reimagined interpretation of a ‘Berlinette’ built in the 1960s — one that proved pretty handy on a rally stage.

The original A110 slung its engine out beyond the rear axle, whereas the modern car positions a 1.8-litre turbocharged unit behind the cabin but within the wheelbase. Its four cylinders make only a modest 248bhp, but an entirely new aluminium platform means a kerb weight of just over 1100kg.

Cars built to Pure specification use smaller, 17in wheels and one-piece Sabelt buckets (the very same as on our fully loaded Première Edition test car) to bring that figure down further. By comparison, a Porsche Cayman equipped with a PDK gearbox weighs nearly 1400kg.

You can get a lighter Cayman with a manual transmission, of course, but the A110 comes fitted with a seven-speed dual-clutch from Getrag. That’s right; there is no manual. The auto has been modified from what you’ll find in the Renault Sport Clio, however, and now uses wet clutches and custom ratios. Suspension is by double wishbones front and rear, and the tyres are refreshingly narrow 205-section affairs.

This being a sports car with pretensions of purity, drive is delivered to the rear axle alone and it does without a limited-slip differential in favour of a system that brakes the inner wheel during cornering. Using an open differential saves weight (and money), although there’s also the fact that an LSD can corrupt steering feel just off centre — just ask Lotus. 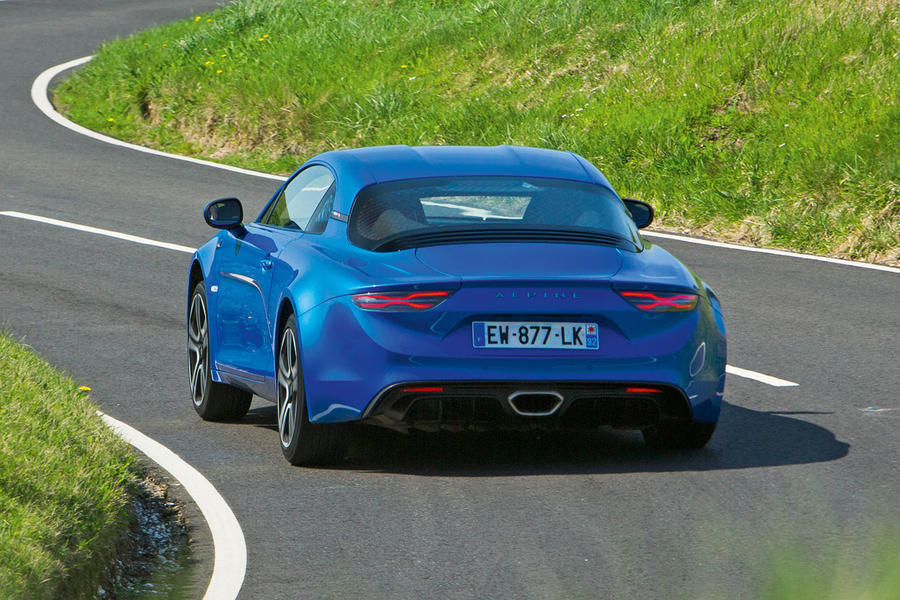 It’s no secret that the A110 is an exceptionally fun car to drive. It might, however, take you a moment or two to realise it in Blighty.

Potter along and electromechanical steering is light on road feel and the front axle likes to go hunting on the broad spectrum of British roads, whose surface is in need of remedial work. You don’t get the unrealistic but satisfying sensation that the contact patches of the tyres are at all times sitting perfectly flush with the Tarmac, as you do in a Cayman, and at the first it’s all a bit vague. You might even feel disappointed.

You’ll notice, too, that this car won’t corner as flatly as some rivals and that the damping isn’t as assertive as it might be. There’s a pervasive fidget, which is perplexing because the suspension set-up feels a touch soft. You might begin to wonder whether the A110 is simply ill-suited to life on this side of the Channel.

But something of a turning point soon arrives — once you’ve got your head around the proportions of the A110. Not that it feels remotely claustrophobic within, but the car is tiny. It is narrower that a Clio 220 Trophy, in fact, and considerably shorter than that car’s older brother, the new RS Mégane. You wouldn’t think it, given the sweeping Kamm-tail-esque rear end and the aluminium bodywork theatrically draped over the haunches.

Such modest dimensions encourage you to start using the road width to its fullest, to start carving lines within your lane and to exercise an intensely pneumatic-sounding engine that’s not notably tractable but likes to spin. Accompanied by snorting upshifts, you start to go quicker — not by a lot — and then the realisation comes that this chassis possesses such a sweet, sweet combination of control, roll and grip.

I'm not sure any other car currently on sale so surreptitiously gets you so instinctively straddling the limit of its adhesion. Second and third-gear corners are an utter delight, with the A110 feeling up on the balls of its feet and with a definite rear-biased, adjustable poise. At speed, the steering finally possesses some heft and the nose of the car likes to shadow the inner white line a touch more tightly than the tail.

That additional slack in the suspension, and the car's terrifically intuitive roll rate in relation to steering input, is key. There's a benign predictability to the rear-led manner in which an A110 crosses the grip threshold that you find yourself driving the wheels off the thing on almost any kind of road. Really get on top of it — as you surely will, such is the confidence you’ll take from this chassis — and the A110 can leave you frothing at the mouth.

There will be times when you won't want that, of course. And, no, an A110 isn't as cultured as a Cayman at a cruise, being louder and more agitated, but it's just about good enough to tour in and has luggage space in the back as well as under the bonnet. You're also unlikely to put your back out climbing into it, although it is quite a drop down into the quilted buckets. Over-the-shoulder visibility is extremely poor, mind. 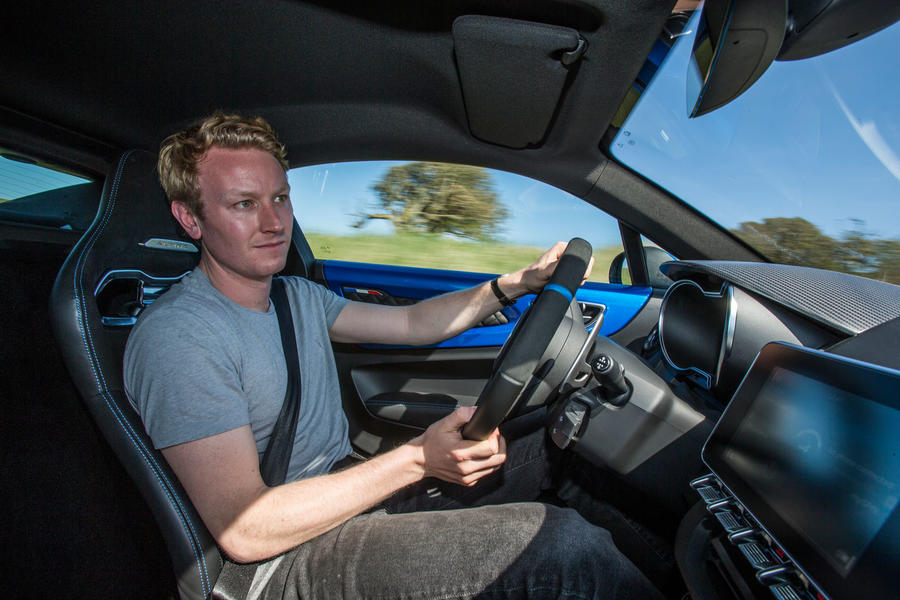 Unquestionably, you should experience an A110 before you take your £50,000 and bolt, unthinkingly, for the familiarity of Porsche or BMW.

Both manufacturers' rival models are quicker than the A110, and while the 718 Cayman S possesses a depth to its handling you’ll never tire of exploring, the M2 opens a sluice gate for cheap rear-driven thrills. You’d be delighted with either.

But probably not as delighted as you’d be with an A110. It is not flawless, but the contrasting attributes that appeal in its German counterparts are bedfellows in the A110, which manages to be both fun and interesting at almost any speed. On British roads, it can entertain like few others. 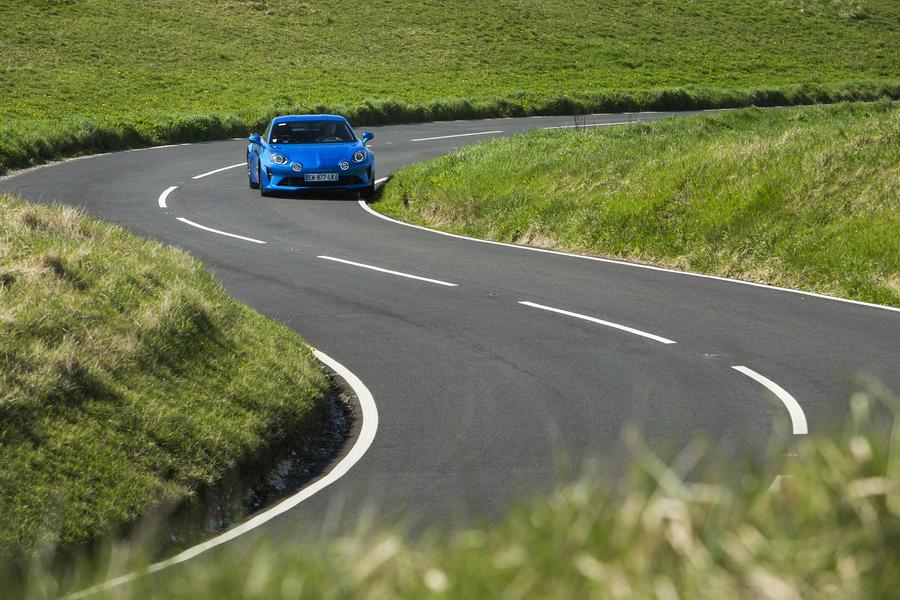 And I thought I got sunburnt

And I thought I got sunburnt easily! ;-) Nice car and great that it's something a bit different. Not sure how many we'll see but would definitely get one if in the market for this sort of car!

Nice to see a historic marque make a triumphant return, especially in an era when there are so many models that look the same. It would be great if they make a de-tuned budget version that is priced in between the top RenaultSport Megane models and this 'full fat' Premiere Edition.

Nice motor, but centre screen must hold new world record for largest bezels? Would have still been massive a decade ago.