If you, like me, have an unhealthy and somewhat embarrassing fondness for the monstrosity that is the BMW X7 M50i, Alpina’s take - the XB7 - should be right up your alley.

Lordy, it’s a big boy: hardly a car that’s best suited to a more incognito style of transport. The standard X7 is already a fairly potent exercise in excess, but with its enormous optional 23in rims (the largest yet fitted to an Alpina), an extended body kit, those trademark Deco lines and a set of quad exhausts, the XB7 is better described as a monolithic celebration of four-wheeled opulence. Sure, it doesn’t quite take things to Rolls-Royce Cullinan levels, but I still can’t help but respect its ridiculousness.

In addition to all that new exterior finery, the regular X7 M50i’s mechanical hardware has also been Alpinafied to bring it up to XB7 specification. Buchloe has strapped a brace of larger turbochargers to BMW’s 4.4-litre V8 engine and completely overhauled the car’s cooling system. There’s a new stainless-steel sports exhaust in the mix, too.

The result is a massive 613bhp and 590lb ft – figures that represent respective increases of 90bhp and 37lb ft over the ‘standard’ X7 M50i.

An eight-speed automatic gearbox jointly developed by Alpina and ZF has been fitted to cope with the uprated engine’s power, while the xDrive four-wheel drive system has also been tweaked.

Our test car also features a set of optional enormous drilled and ventilated disc brakes - handy on a machine that weighs in at 2.6 tonnes and can hit 62mph from a standstill in just 4.2sec. 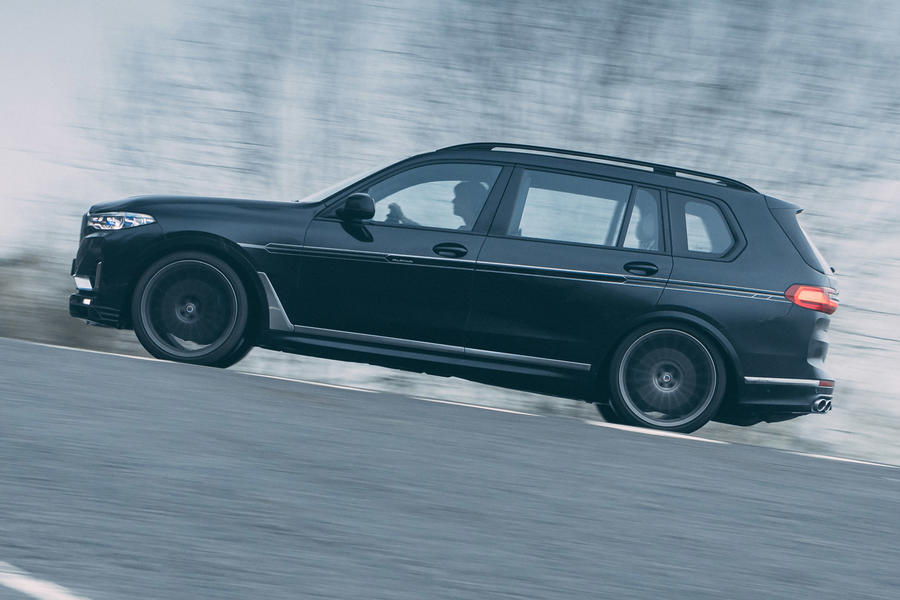 Aside from a handful of Alpina logos and roundels, the cabin of the XB7 doesn’t differ too greatly from that of a well-specced X7 M50i. While build quality and material appeal are exceptionally high, it doesn’t quite evade the slightly straight-laced, business-like atmosphere that was present in the base car.

The cabins of the Bentley Bentayga and a high-end Range Rover feel like genuinely special, unique places to spend time; the XB7’s interior, on the other hand, resembles those of other, rather more ordinary BMWs a bit too closely for my liking.

Still, it’s an insanely comfortable place. The chairs are soft and supportive and are upholstered in the same fine-feeling Merino leather that you can specify in the X7. Our test car had the optional full leather package, which extends this Merino treatment throughout the entire cabin for a cost of £4995. The headlining is a deep-blue Alcantara and the steering wheel is finished in Alpina’s beautiful Lavalina leather. Got a spare £11,050 burning a hole in your pocket? You could retrim the cabin in that very same material, if you fancy.

Oh, and as with the regular X7, you can have your Alpina with six or seven seats. The third row isn’t some poxy affair best left for children, either: you genuinely can get two adults in there comfortably. Do so and you’ll be left with 326 litres of luggage space in the boot. It's 750 litres if you leave only the front two rows in place.

The reworked 4.4-litre V8 is a seemingly endless well of torque and performance. Tip your foot into the throttle and the forcefulness with which it then accelerates is mind-bending. Its transmission wastes very little time selecting a gear and there’s minimal lag as those two turbochargers spool up. You just leave immediately.

Mind you, I would say the exact same thing about the X7 M50i. On regular British roads, I really don’t think you would notice the Alpina’s additional performance. You probably would on a derestricted stretch of autobahn, but here? Hmmm, not so much.

Like the X7 M50i, the XB7 can feel a touch too eager at step-off. You need to be a bit more delicate with your inputs when rolling away from a standstill, otherwise you can find yourself surging forward with a degree more urgency than you might have wagered for. It’s a small complaint about what's otherwise a seriously classy powertrain but a noticeable one. 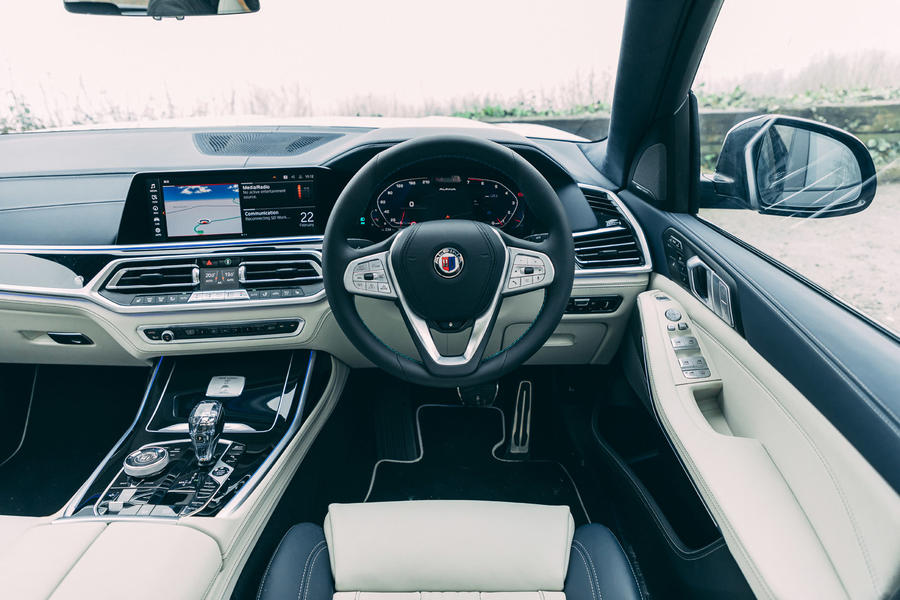 Those 23in alloys irk in a similar fashion. Sure, they look pretty fantastic beneath the XB7’s enormous body, but they generate quite a lot of road noise at cruising speed and bring a detectable prickliness to the low-speed ride. Again, they're no dealbreaker (and there are smaller 21in rims available as standard, which are probably better in this regard), but I remember the X7 M50i being not only quieter but slightly more settled too.

In fact, most aspects of the standard X7’s ride are a bit tidier than that of the XB7’s. Alpina has tweaked the air suspension set-up, introducing new damper settings and revised kinematics that supposedly offer an enhanced balance between handling dynamism and ride comfort. There are five driving modes available: Comfort, Comfort Plus, Sport, Sport Plus and Adaptive.

For the vast majority of the time, Comfort is where it’s at. This seems to offer the most convincing balance between soft-edged pliancy and outright body control during regular driving - although that balance does feel as though it’s tipped slightly more in favour of the former. It feels a tiny bit spongier and looser than the X7 M50i does in its Comfort setting.

Sure, the XB7 may still be a lovely car to point down a motorway, but this, combined with the added road noise, means that ultimately it’s just not quite as satisfying. Comfort Plus mode - usually an Alpina’s joker card - is best left alone. Here it really starts to feel floaty, almost to nauseating effect.

That said, if you ramp things up into the sportier modes and show the XB7 a twisty road, it’s tricky not to be impressed. There’s still quite a lot of lateral movement through faster directional changes, but it’s well controlled.

The steering is light and accurate, just as it is in the regular X7, but it makes the XB7 feel a touch more delicate in its responses than a car this size otherwise might.

Grip feels incredibly abundant too - even on damp roads. Its size means it isn’t the easiest nor the most enjoyable car to pedal down some of Britain’s tighter, poorly sighted roads, but there’s abundant dynamic competency on display here. 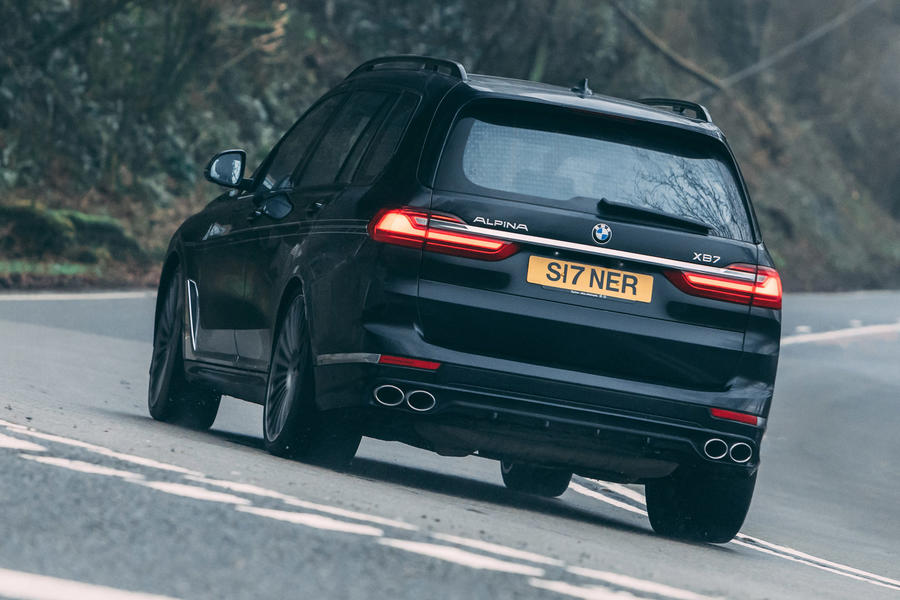 It’s hard to shake the feeling that the biggest threat to the XB7 is in fact the X7 M50i upon which it’s based. Usually, Alpinas really stand out because they offer a more appealing take on real-world performance than the firm-riding, aggressive full-fat M Division cars that BMW makes itself. I would certainly have a B3 or a B5 over the equivalent M3 or M5 any day of the week.

But when it comes to the XB7? Well, I don’t think I would. As is the case with an increasing number of BMW’s lower-rung M Performance models (the ones that sit just below the proper M cars), the X7 M50i already felt as though it was going down a more Alpina-flavoured route. The result is that this actual Alpina model isn’t quite the revelation it might have been if the only seriously quick X7 in the BMW stable was a seriously hardcore X7 M (what a terrifying thought that is).

You would really have to value exclusivity to justify making that jump. 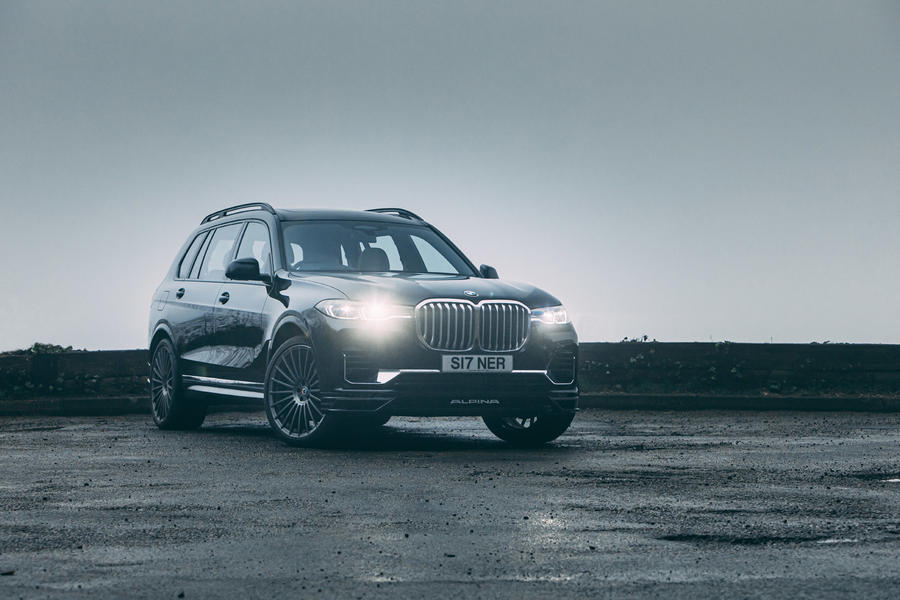 And A Porsche Taycan Turismo with a few options can cost similar, which would you chose?

michael knight 5 March 2021
A poor footnote in Alpina's history. of course they must follow the money to survive.
When did this kind of overweight, oversized vehicle become what the nouveau-riche want to be seen in? Have to blame the Yanks.
abkq 5 March 2021
In this market dominated by new money, size and intimidating presence are everything. No subtlety required.
Antony Riley 5 March 2021

Yikes love to be at BMW,s design dept when this was signed off. Grotesque grill tick. Over glitzed exterior additions tick, dashboard that looks like  all other  boring BMW,s tick  Overpriced tick so what is there not to like Urrrr Class it certainly has not got Mind that boot would hold a load of weed I guess ! .

Yikes love to be at BMW,s design dept when this was signed off. Grotesque grill tick. Over glitzed exterior additions tick, dashboard that looks like  all other  boring BMW,s tick  Overpriced tick so what is there not to like Urrrr Class it certainly has not got Mind that boot would hold a load of weed I guess ! .