If doublethink is the simultaneous acceptance of contrary beliefs, the BMW 7 Series could be the all-time greatest automotive exponent.

Here is a car required to operate at a highpoint of luxury and isolation but also to inspire confidence from the wheel – the wheel of a limousine chassis weighing almost two tonnes and whose length comfortably surpasses five metres.

The Mercedes-Benz S-Class and Audi A8 need only handle competently enough to focus their energies on spectacular refinement. For the sake of the brand’s heritage and those who occupy the small centre ground of the luxury-dynamic Venn diagram, BMW can’t do that.

Which is why there’s never been much at all wrong with the way the G11 7 Series handles and why this heavily – and expensively – facelifted 'LCI’ version carries over the same multi-mode, self-levelling air suspension largely unchanged. We’ll go into more detail in a moment, but suffice it to that if you or your chauffeur ever needed to get out of dangerous spot pronto, you’ll be glad you bought the BMW.

And you can still opt for the Integral Active Steering, which not only varies the steering ratio with road speed but also slings the rear wheels in the same direction as the fronts for high-speed stability and, more importantly, does the opposite at low speeds for improved agility.

Active anti-roll bars – part of the Executive Drive Pro pack – are also carried over, and by readying themselves for corners using data from the onboard camera and sat-nav system, they further the car's cause as a dynamic benchmark in this class.

Except for a plug-in hybrid whose cylinder count rises from four to six and a flagship 6.6-litre V12 whose total power falls from 601bhp to a paltry 577bhp (thank WLTP), the engine line-up is similarly recognisable from before and impressive on paper.

So what has changed, other than a 23mm increase in length for both standard and long-wheelbase cars? Surely you’ve noticed. What the G11 has always lacked and the contemporary S-Class has always had is true a sense of occasion, which is why BMW has made some punchy aesthetic changes and gone all-out for 'prestige'.

The grille is almost half again as large as before, sitting 50mm taller, and the air breathers behind the front wheels now sit bolt upright. M Sport models get front air intakes so vast they wouldn’t look amiss on the Porsche 911 GT2 RS, and the widened exhaust apertures are similarly supercar-spec.

BMW says it wants to channel the vibe of Rolls-Royce, and the result is a visual roundhouse only very lightly tempered. The headlights and heavily contoured taillights are slimmer, as are the door mirror stalks, and creases in the bodywork are bit sharper to help take some of the bulk out of what remains a conservative shape. 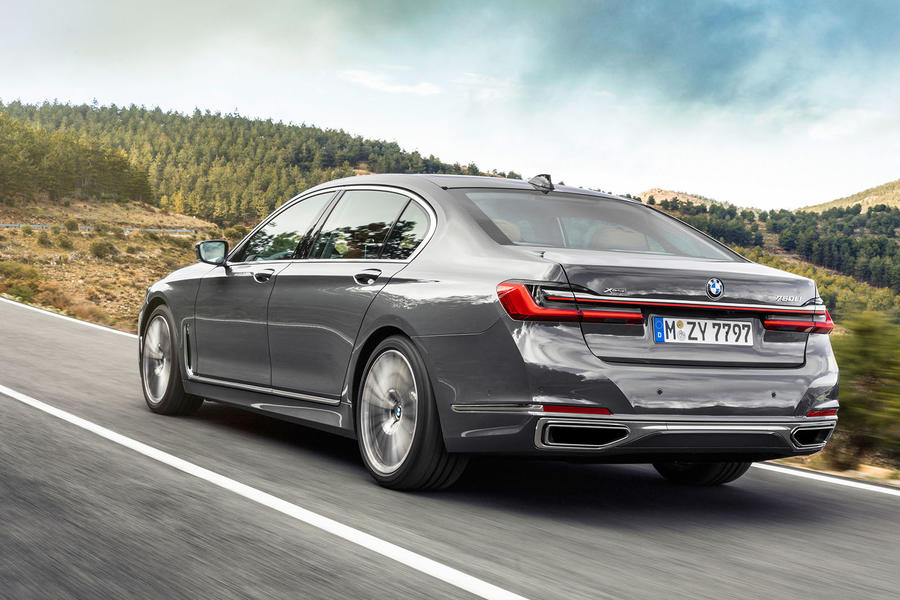 It's a technolux fortress on wheels. Step from the S-Class into the 7 Series and the first things you’ll notice are that the broad dashboard is convex rather than concave and that the scuttle seems so much higher. It’s less lounge-like inside and more protective in feel, although not remotely cramped.

The digital array now consists of a high-resolution 12.3in digital instrument display and a touch-sensitive 10.3in display atop the dashboard – together known as Live Cockpit Professional and already found in the new 8 Series. The graphics are slick enough, but the side-scrolling dials aren’t as easily read as the more the classic roundels in the pre-facelift car. Along with new matt-chrome and piano-black finishing for much of the switchgear, some lovely wooden inlays dotted about and a new parquet-style leather option, they do, however, put a bit of distance between the 5 Series and 7 Series, even if the basic architecture of these sibling saloons differs only in its scale.

Of course, the trick for any 7 Series is that it needs to be effortless, but not too effortless. Even a small surfeit of weight in the controls or of damping performance misses the point in this class, but as a BMW, the big 7 does need to give its driver some measure of dynamic satisfaction.

And it's a line the car continues to treads well. In fact, the latest 7 Series (albeit one fitted with all of the optional chassis tricks) rode the looping Portuguese roads of our test route sublimely well, with such balance, grace and so little body roll you'd swear this 1965kg 750Li xDrive was 200kg lighter. Granted, this generation offers a marginally more remote experience than 7 Series past, with lighter steering and little more float in the suspension, but optional four-wheel steering and active anti-roll bars make it quicker, more accurate and thoroughly more confidence-inspiring device than the S-Class.

The ambience is pretty exceptional, too. The window glass is now more than 0.5cm thick and there are further sound insulation measures applied to the wheelarches, the B-pillars and the backrest for the rear bench. And though the revised 90deg 4.4-litre V8 may be a bit vocal under load (in fact, it spins out very happily to 6250rpm), at a steady motorway cruise, it will take one of our road-testing microphones to determine any difference between this and any comparable car the affordable side of the Rolls-Royce Phantom.

Qualms? Over speed bumps, expansion joints and the like, this chassis still isn't quite as deft as some, although in Comfort Plus mode the primary ride on smooth European motoways is predictably sublime. In tight environments, the 7 doesn't disguise its vast size quite as well as an S-Class, either, which betters the BMW's turning circle and generally feels more manageable. In terms of luggage capacity, there's not a lot in it, with all the major players in this segment boasting a little more than 500 litres.

But we can't not mention the grille again. It isn’t such an eyesore in the metal, but it is inelegant. Try to bear in mind the average 7 Series owner in China, where almost half of these cars will end up, is just 38 years old. They want a statement vehicle that amounts to more than a supersized 5 Series, and BMW feels it cannot ignore that. Of course, from the inside, you don’t have to see the car's maw, and on the basis that inside is where the 7 Series has made greatest progress, perhaps the divisive exterior design doesn’t matter. 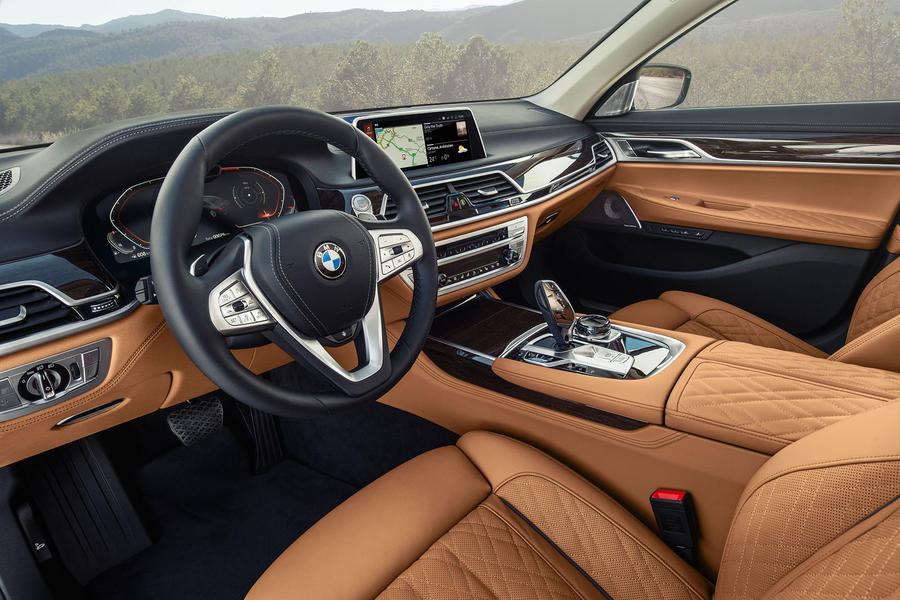 You can dislike the more garish elements of BMW’s design, but on the evidence of this drive, the 7 Series has never been so close to matching the S-Class in terms of its road manners. Much of this is down to the acoustic measures, although the new interior materials and digital array combine to elevate the ambience. It really is a fabulous interior.

Prices start at £69,445 for the 730d and £71,735 for the entry-level petrol, the straight six 740i. Both are broadly in line with what Audi charges for the equivalent A8 model, although reflecting its position as the current class leader, Mercedes ask for fractionally more for the S-Class. Fair enough.

And it's the S-Class that should give you pause for thought. There's a new one due next year – one with a radically redesigned interior. Don't be surprised if it moves the super-luxury game on yet again, but equally, don't expect it to drive as nicely as this 7 Series. 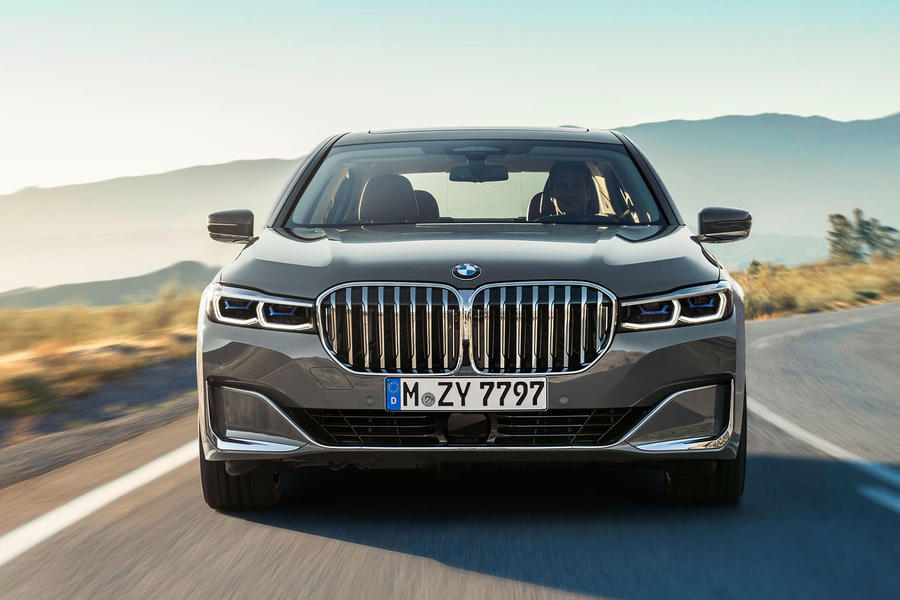 I am making comments

Great plus good item review of excellent most limousine for all people. Bad moderation of control at Autocar. Clean up comments. Stop broken English platitudes and non praise of scammers scumbags and fraudster people. Soon. In other words Autocar staff sort out your comments section you f **cking muppets and get rid of these idiotic scammers before your readers desert you for websites that stop this guff. Message received?