BACK TO ALL NEWS
Currently reading: Used car buying guide: Toyota MR2
UP NEXT
Red Bull RB17 is radical 1250bhp hybrid hypercar for 2025

The Toyota MR2 does what it says (in abbreviated form) on the tin. We investigate the 1989-1999 iteration of this playful and reliable sports coupé
Open gallery
Close

Let’s gloss over why the Toyota MR2 was sold as just the MR in France. If you understand the reasoning, have no fear, for this car is anything but that.

What we have here is a small Japanese two-seat sports coupé that’s rising rather rapidly in value and thoroughly deserving of its commonly applied ‘modern classic’ designation. A running-and-driving example of this second-generation car commands at least £2500, but if you’re handy with the spanners, you could consider picking up a project for a good deal less than that.

Things do become slightly more complicated, however, when you take into account the array of specifications and generations that you will find dotted around the classifieds. To start with, the SW20, as the Mk2 MR2 was known, was at first sold in Europe in three trim levels – Coupé, GT and GT T-Bar – each with different states of tune for the revered naturally aspirated four-cylinder 2.0-litre engine.

Outputs ranged from 119bhp to 158bhp, and top-rung cars gained desirable extras that are a big factor in their continued premium status. The rarer T-Bar, for example, swapped the standard fixed roof for a pair of Targa-style removable panels which endowed the MR-2 with a sort of dual character that’s only really emulated today by the Mazda MX-5 RF. 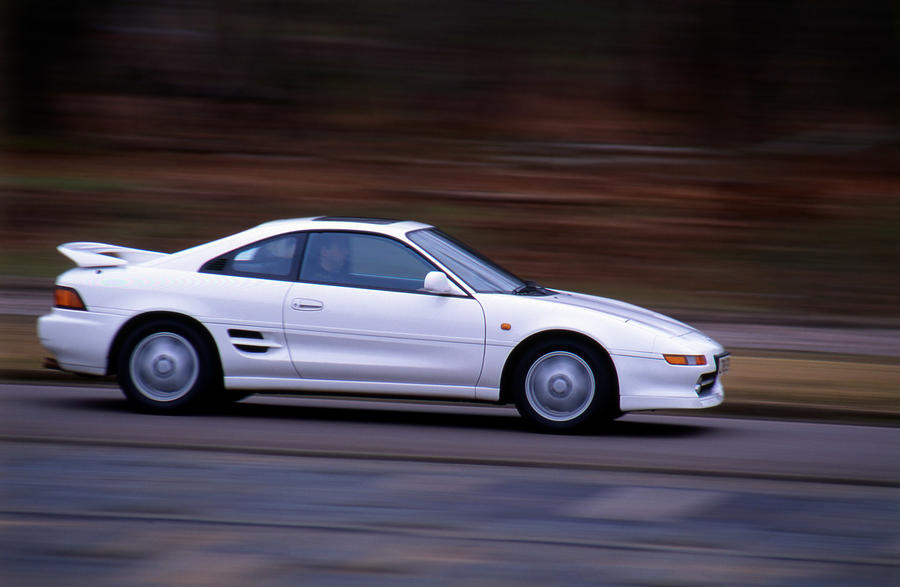 That’s not to say lower-spec cars should be avoided at all costs; the entry-level 3S-FE engine falls short on power, but the model that uses it makes up for that by retaining the MR-2’s characteristic agility. And because you sit so close to the ground, it will still feel suitably poky on the right road.

There are some examples with an automatic gearbox still to be found, but that will be a compromise too far for many prospective buyers.

Turbocharged variants were sold in Japan and the US, bringing power up to 242bhp, but never officially came here. That’s a shame, but there are several imported examples on offer, mostly from Japan, which means the steering wheel is already on the right side. You will need up to £10,000 for the cleanest blown cars.

Then there are the various facelifts, or ‘revisions’, to consider. The slowest MR2 was axed in 1992 with the introduction of the Rev 2 car, while the remaining variants gained power steering as standard and a set of 15in five-spoke alloys that filled the arches much more capably.

The Rev 3 arrived in 1994, bringing a restyled rear, suspension changes aimed at making the car less prone to snap oversteer, and leaving just one engine that produced 175bhp.

Later updates would be subtler, but the run-out Rev 5 is particularly desirable today – largely because it was the ultimate incarnation in terms of fitted kit and survivors will generally have lower mileages. 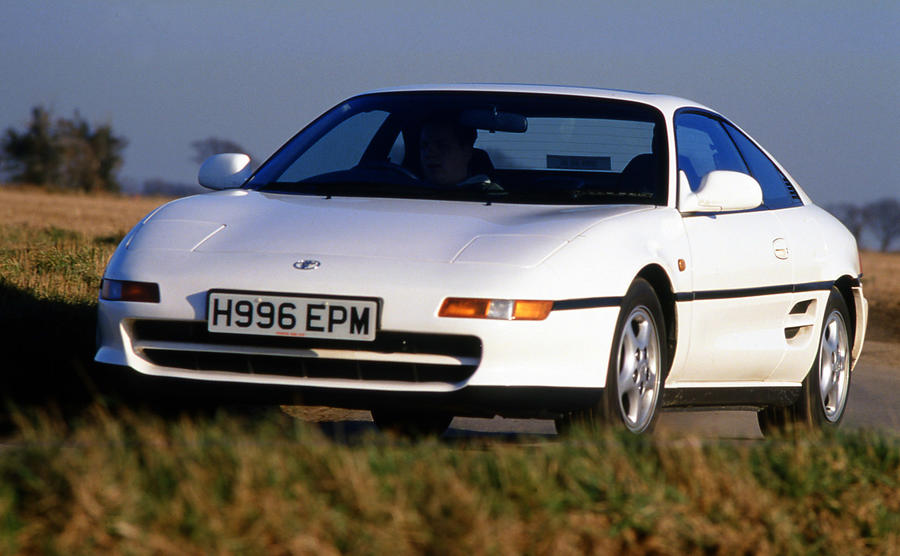 Ian Twitchell: “I’ve been into MR2s for more than 15 years and know them like the back of my hand. It’s the only car I’ve ever felt a perfect harmony with: everything just fits and is what it should be. If you can spend a day in one, you’ll fall in love. As for problems, there’s nothing that isn’t to be expected for a 25- to 30-year-old sports car. In reality, it’s a typical Toyota: if you take care of it and don’t abuse it, it tends to last a long time and have only minimal issues.”

■ Engine: The engines are generally tough, but servicing is no annual job. Oil and filter swaps should be carried out every 2500 miles and a full service should be performed every 6000 miles for Rev 1 and Rev 2 cars or 9000 miles for later models. In normal usage, an imported A turbo engine will drink like an atmo; 35mpg is good going. Cracking coolant pipes are a common bugbear, so give them all a good squeeze and check the vulnerable radiator for any damage.

■ Bodywork: Imports can usually be told by their square rear numberplate housing and are likely to be more solid. Check wheel arches, door bottoms and sills and give special attention to T-top panels. UK cars were also sold with a conventional sunroof; check for blockages around the drainage holes at the bottom of the A-pillars. Red was a popular colour but ages badly, so invest in an MOP.

■ Electrics: Check the battery holds its charge on your test drive, because the alternator is prone to water damage. Otherwise, something staying on after shutdown could be drawing power; the amplifier in the B-pillar is a common culprit. If it’s an import, the speedo and radio won’t necessarily be adapted for the UK, as this isn’t an MOT requirement.

■ Interior: Lift the boot floor to check for damp and rust. On T-Bar cars, check the carpets fore and aft of the seats. A sticking radio aerial will make a horrible noise on start-up; it’s a very complex system and OEM replacement motors are expensive, but you could have a go at fixing it with the help of a comprehensive online guide.

■ Wheels and suspension: Take a tape measure to ensure the wheels are correctly staggered; the rear axle needs more traction, thus its tyres should be about 20mm wider. 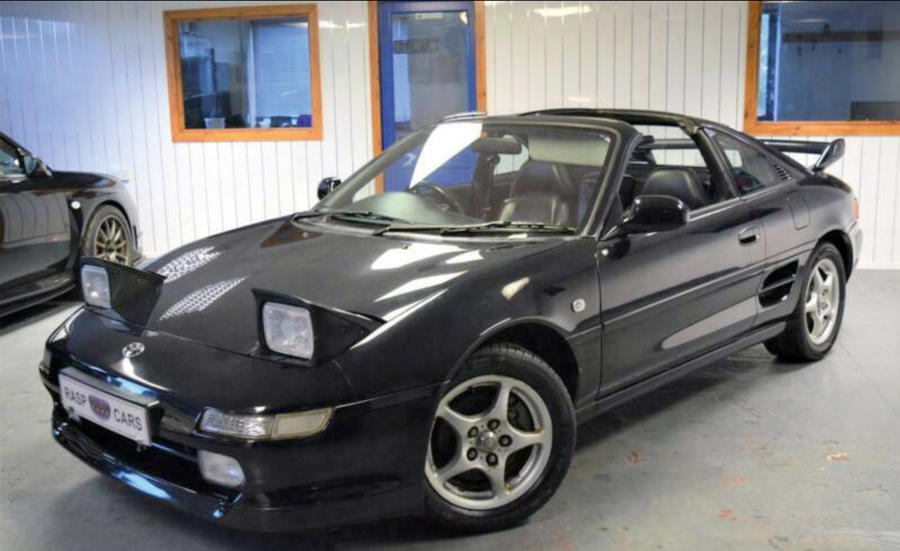 Toyota MR2 GT-i T-Bar, 1999, 144k miles, £3995: We’re rather comforted by this very late UK car’s astronomical mileage, as it means it hasn’t been languishing in someone’s garden for years. There’s loads of paperwork for reassurance and the seller claims it’s in excellent condition throughout. The stainless-steel exhaust is a nice addition, too.

I'm sure there was a 200hp varient in the UK towards the end of its run. I say this because a friend bought one from a Toyota dealer in Paisley / Linwood. Looked like the black one pictured, and indeed that was the colour he picked too.

I'd have to say it was a very good car, but the front didn't seem as planted as I'd have liked over slightly rough roads (not bumpy, just a rough finish). Didn't give confidence, but the engine was quick.

Sadly, I ended my friendship with him when he decided to do 70mph past a hall that was being used as a school as it was emptying of pupils (limit was 30mph). I have never come as close to thinking I was going to be in a deadly accident as that day, and even though I'd known the guy for many years, that was it for me. I didn't want part of that.

Lovely little car, in all variations, though I particularly like the T-Bar.

Storage isn't too bad, provided you and the gf are content with soft luggage.