BACK TO ALL NEWS
Currently reading: Used car buying guide: MG RV8
UP NEXT
First electric Lamborghini due by 2030 as two-door GT

"An anachronism, albeit a strangely likeable one,” concluded Autocar when we tested the then new MG RV8 in 1993. With the car’s leaf springs, rear drum brakes and wood and leather-trimmed interior on the one hand, and a widened track, modern engine management system, Quaife limited-slip diff and 190bhp fuel-injected 3.9-litre alloy V8 on the other, the statement summed up the roadster perfectly.

Japan loved the model, eventually buying 1600 (80%) of the near-2000 cars that were built between 1992 and 1995. Most of these had extras such as air conditioning fitted to them and were finished in Woodcote Green. Around 800 of them have since been repatriated to the UK, and they populate the classifieds today.

The idea for the RV8 came when Rover’s Heritage Division began making MGB body shells for the restoration market and suggested developing a V8-powered MGB roadster (previously, only the MG GT had been available with a V8). The Mazda MX-5 had proved there was a market for a two-seat roadster, so Rover, keen to launch its own, developed the idea and created an MGB for the 1990s. The model was designed to use as many existing MGB parts as possible, but in the end the completed car shared only 5% of them, most notably the doors.

Unfortunately, investment in the project was limited to around £5 million, which was why the RV8 retained the old MG’s leaf springs and drum brakes, while its cheaper rival, the TVR Chimaera, powered by a 4.0-litre version of the RV8’s 3.9-litre V8, had independent suspension and all-round disc brakes. Comparisons like this rather did for the MG in its home market, which is why Japan’s enthusiasm for the model was a gift to a beleaguered Rover. 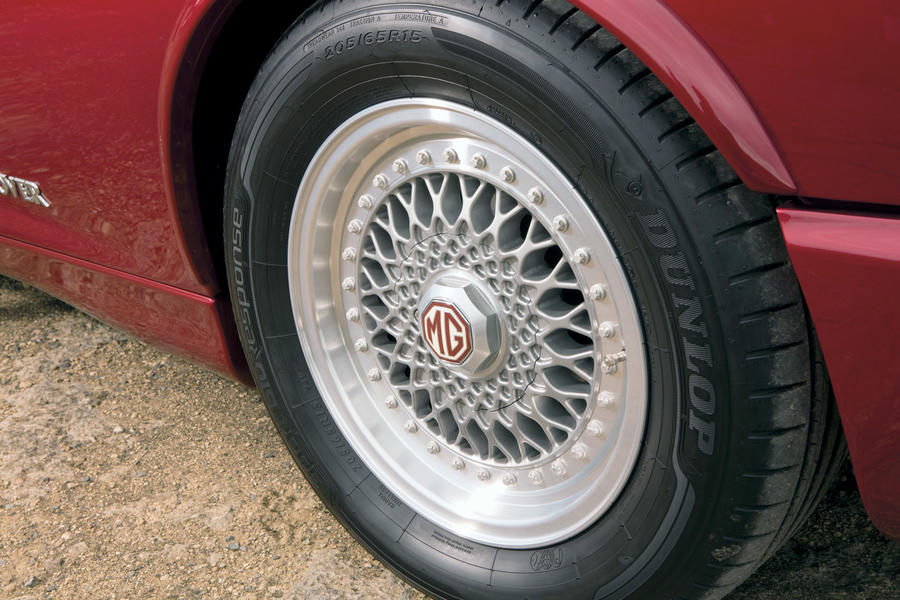 As things have turned out, it’s also been a gift to used car buyers, who, thanks to so many being repatriated, now have lots more RV8s in good condition to choose from. They’re worth slightly less than UK cars, possibly because determining their service history and provenance is more difficult, and because Woodcote Green is not an especially attractive shade. UK RV8s tend to be in Oxford Blue, Nightfire Red, Le Mans Green, British Racing Green or black and fetch higher prices but are rare. A good place to find them is the ‘for sale’ pages of the V8 Register (v8register.net). Regardless of their exterior colour, all RV8s had a cream (called ‘stone beige’) Connolly leather interior with burr elm wood trim.

An interesting thing to note is that two types of five-speed manual gearbox were fitted to the RV8 during its production run. The first, a variant of the Rover SD1 gearbox, is called the LT77S. At VIN number 0644 it was changed to the R380, an improved unit. Telling them apart is easy: on the LT77S, reverse is up to the left; on the R380, it’s down to the right. It’s just one of the many peculiarities that make the RV8 such a strangely likeable car. 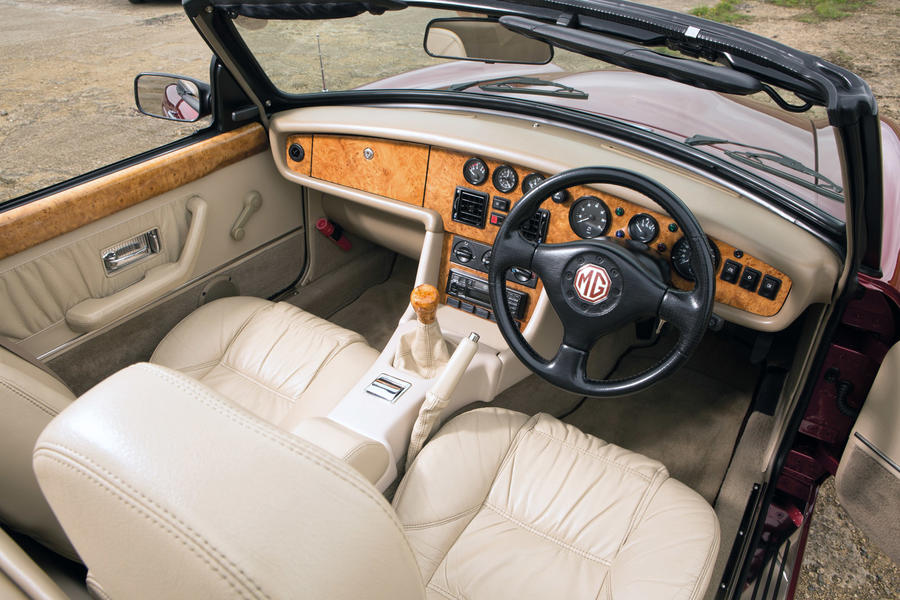 William de la Riviere, Beech Hill Garage: “RV8s are luxurious things with ruched leather and a burr elm dash. Many owners only drive them on sunny days, then stick them in the garage. Build quality is good and the galvanised steel panels rarely rust, while the engine and gearbox are reliable. There are companies that will remap the ECU. Up to 400bhp isn’t unknown, although I wouldn’t want that in an RV8 with its crude suspension. Be wary of buying anything too cheap, though. A colleague here in the workshop bought what he thought was a bargain and he’s still fixing it. Not all RV8s have been pampered…”

■ Engine: The low-pressure, high-volume lubrication system needs a goodquality, semi-synthetic 10W/40 oil, changed every year to prevent sludging. If the oil is a clear, greenish colour, the owner knows this, but if it’s black, they don’t. With the engine running, listen for the exhaust manifold blowing from a leaky gasket.

■ Cooling system: The alloy engine needs a good anti-corrosion inhibitor to prevent overheating. Let it idle and check the temperature. Check the inlet manifold bolts are tight to prevent coolant loss and that the expansion tank and lower radiator fins aren’t leaking.

■ Gearbox: Ask if the car has ever been towed. It’s not advisable because the gearbox has an oil pump that doesn’t operate under such conditions, so risks damage to the unit. Check that the Quaife differential has been filled with the recommended Silkolene Silktran Syn 5, 75W-90 GL5 transmission fluid.

■ Steering, suspension and brakes: Have the steering rack inspected for cracked mounts. Serious kerbing can result in the spoked wheel being written off. Check the condition of the springs, shocks and bushes – many have been upgraded. Inspect the tyres for cracks. 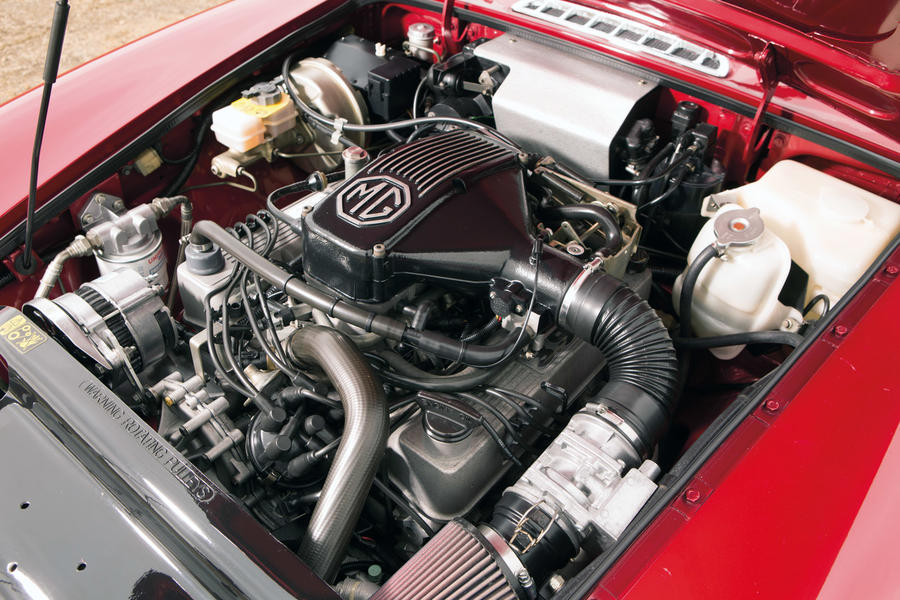 ■ Interior: Examine the gearknob for wear (it’s often replaced with a wooden item). If necessary, factor in the cost of refurbishing the dash, which can crack in sunlight, and cleaning the leather.

For missing parts, try mgv8parts.com. Big movers at the moment are, oddly, replacement bump stops. Tail-lights are impossible to source but website owner Clive Wheatley has the tooling for them and is seeking a supplier to make them at a reasonable cost. 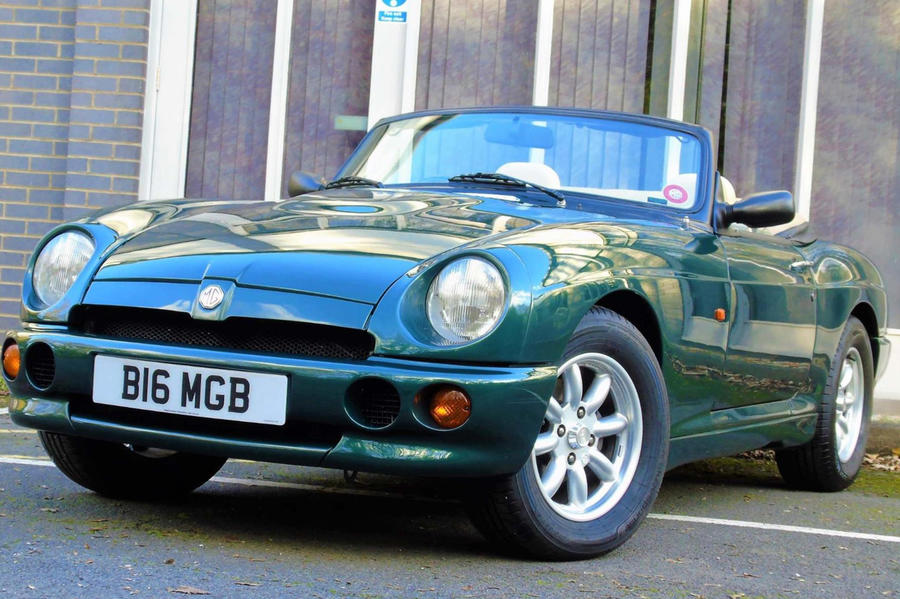 MG RV8, 1995, 48K miles, £24,950: Non-import RV8 in desirable British Racing Green and with performance, exhaust and suspension mods, a new hood and Minilite alloys. The interior is unmarked and there’s a stack of workshop receipts.

Log in or register to post comments
si73 26 April 2021
These are lovely, such luxurious interiors, and a lovely burbling V8, great for cruising around on a lovely sunny day. They've been slowly getting more and more expensive to buy over the years.
scrap 26 April 2021

Something of a trend setter for the restomod craze, you might say. Bit of a stop gap at the time but worth rather more than a MGF today...