BACK TO ALL NEWS
Currently reading: Buy them before we do: second-hand picks for 30 July
UP NEXT
Spending 48 hours touring in a Ferrari Roma

Buy them before we do: second-hand picks for 30 July

If hunting for a hardcore hot hatchback, would you prefer a modern, fire-spitting tech-fest or a gracefully ageing modern classic? This week, we’re making a claim for the latter option
Open gallery
Close

If hunting for a hardcore hot hatchback, would you prefer a modern, fire-spitting tech-fest ora gracefully ageing modern classic? This week, we’re making a claim for the latter option. Having looked at the family- friendly but ultra-rare Volkswagen Passat R36 in last week’s Used Buying Guide, it’s time to consider that car’s more popular sibling: the second-generation Golf R32.

Packing Volkswagen’s charismatic and much-missed 3.2-litre V6 motor, the R32 one-upped the Golf GTI with an impressive 247bhp and 236lb ft. As with its modern-day Golf R descendant, top speed was capped at an autobahn-friendly 155mph, while its grippy 4Motion four-wheeldrive system helped to dispatch the 0-62mph sprint in 6.2sec or 6.5sec, depending on whether you went for the six-speed manual or dual- clutch automatic (DSG) gearbox.

A launch price close to £31,000 represented a £4000 premium over the GTI, but the performance benefits were tangible and clearly well worth the money, and the number of R32s you still see on the road is testament to their durability. The inherent practicality of the roomy three- and five-door bodies isn’t to be ignored, either.

Many see the R32 as a bellwether for mega-powered yet uncompromising usable hot hatches, and indeed you could still drive one daily today. It sat 20mm lower than regular Mk5 Golfs, featuring the requisite stiffer dampers and springs and larger anti-roll bars. Aggressive new bumper designs accommodated revised air intakes for improved cooling, plus there was a twin-exit chrome exhaust, the R sub-brand’s now-traditional blue brake calipers, 18in wheels, a chrome front grille and bi-xenon headlights to further distinguish the car. 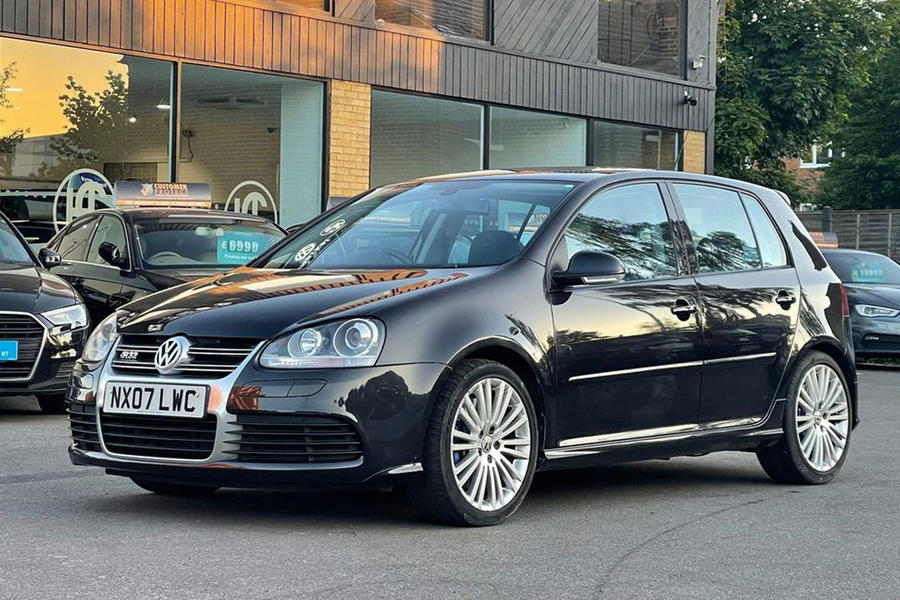 In a bid for further exclusivity, the R32 lost the Golf bootlid badges, while inside it gained a multifunction steering wheel (with shift paddles on DSG models) and aluminium trim inserts decorating the dashboard, centre console, door panels, pedals and instrument dials.Climate control was also fitted as standard, as was Volkswagen’s new intelligent window-wiper system. Sat-nav, parking sensors and a six- CD multichanger were all optional extras, so keep an eye out for these on any used R32s that you find.

All of this makes for a jolly exciting proposition, which is only enhanced by the relative accessibility of clean R32s these days (if you can stomach an annual road tax bill of £585). Purchase prices are tempting. You will probably only need to spend £8500 for a well-run-in example. We found a two-owner car from 2008 with 86,000 miles on the clock for £8990. Its extras include an electric sunroof, pearl-effect paint and side airbags for greater safety. You won’t be short on choice so should be able to find the perfect hot hatch to suit all your driving needs. 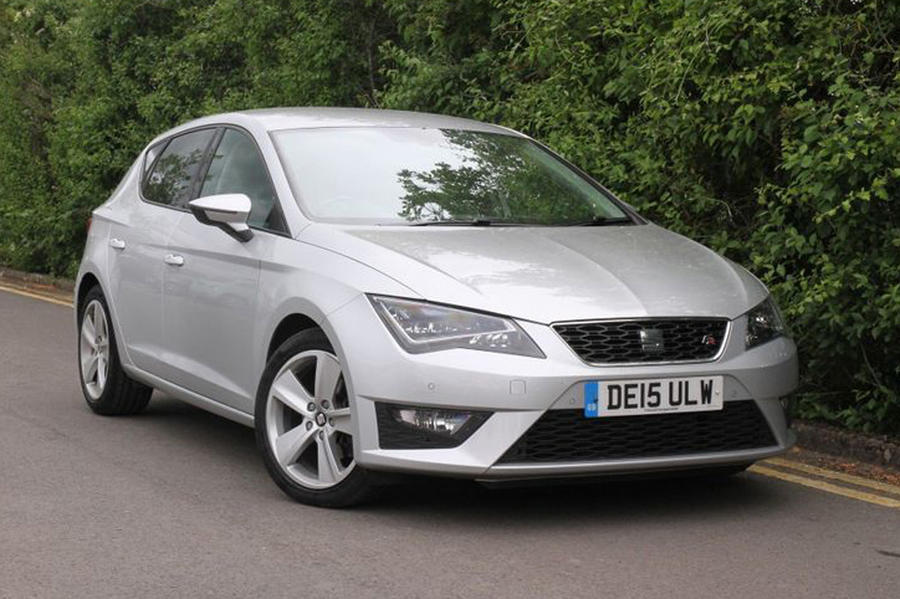 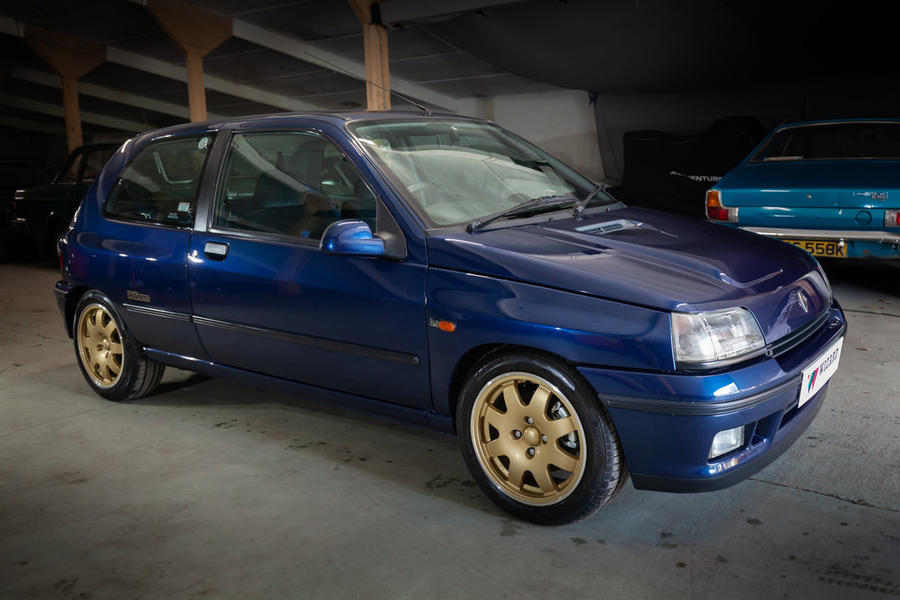 Renault Clio Williams £19,995: A classic and now very rare little hot hatch, this celebratory Clio has an immaculate interior, unmarked paintwork, a complete service history, a clean MOT, all the original keys and the rare original Williams booklet. Don’t mind if we do... 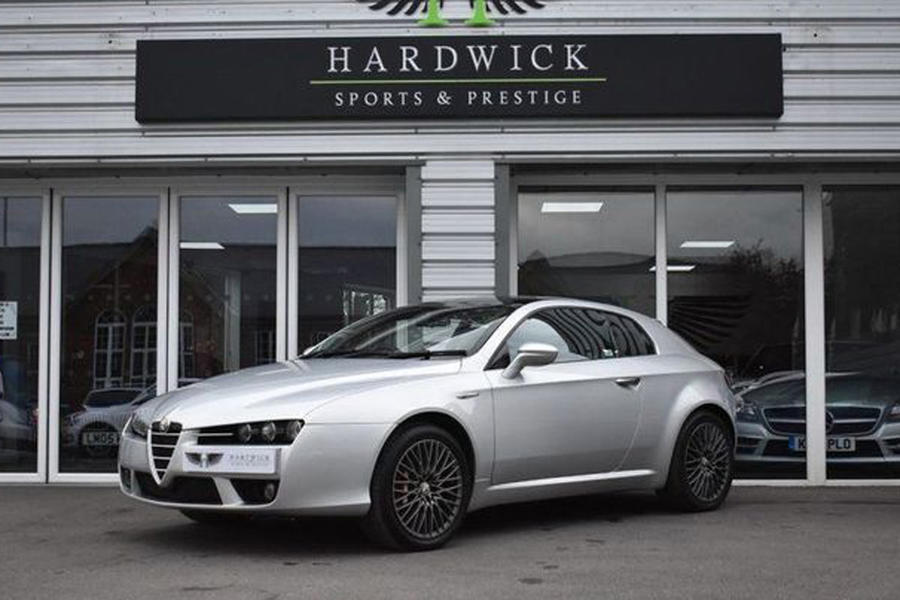 Alfa Romeo Brera 3.2V6 JTS Q4 SV £6495: This coupé certainly beats the R32 in the looks department and doesn’t lag far behind in performance terms. It has a vocal 3.2-litre V6, making it good for 0-62mph in 6.8sec, plus cruise control, 17in alloys, sports seats and a host of safety tech. 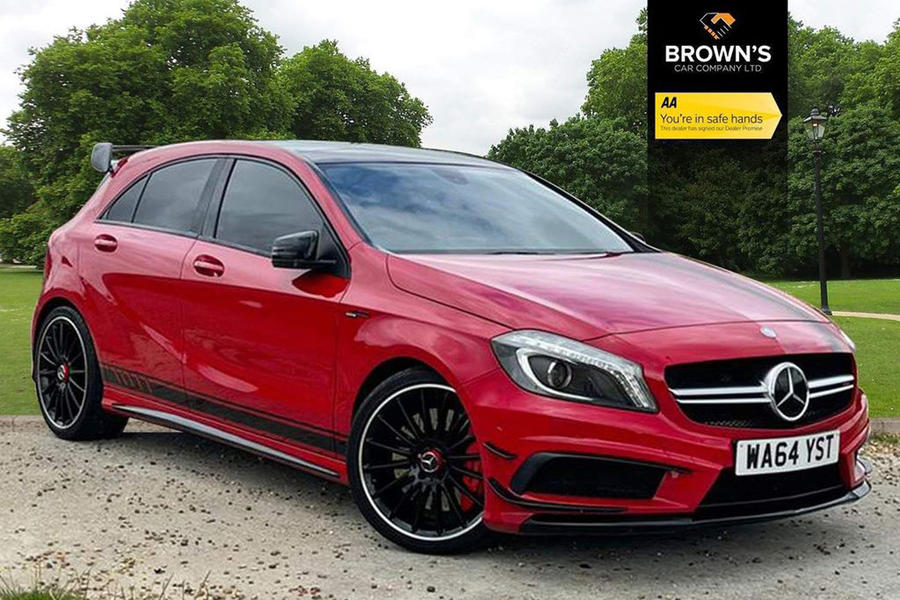 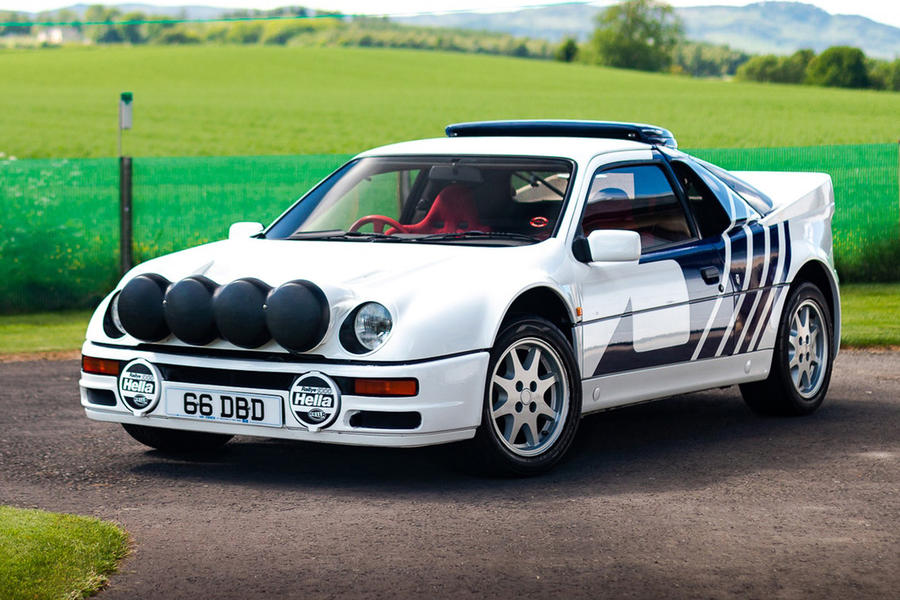 FORD RS200: Who doesn’t love a good old-fashioned homologation hero? The Ford RS200 is one of the best known and most exciting, having been conceived as essentially a Group B World Rally Championship car that you could drive to the shops. This 1988 car has done just 5500 miles; its 2.0-litre, Cosworth-developed engine was fully rebuilt last year, having been fully recommissioned and uprated to produce more than 400bhp; and there’s zero bodywork damage. It also features a replacement turbocharger with an updated ECU and better wastegate. Get an eyeful while you can: it sold for a mouth-watering £233,500, so we reckon it’s likely to spend the rest of its life as part of a private collection. 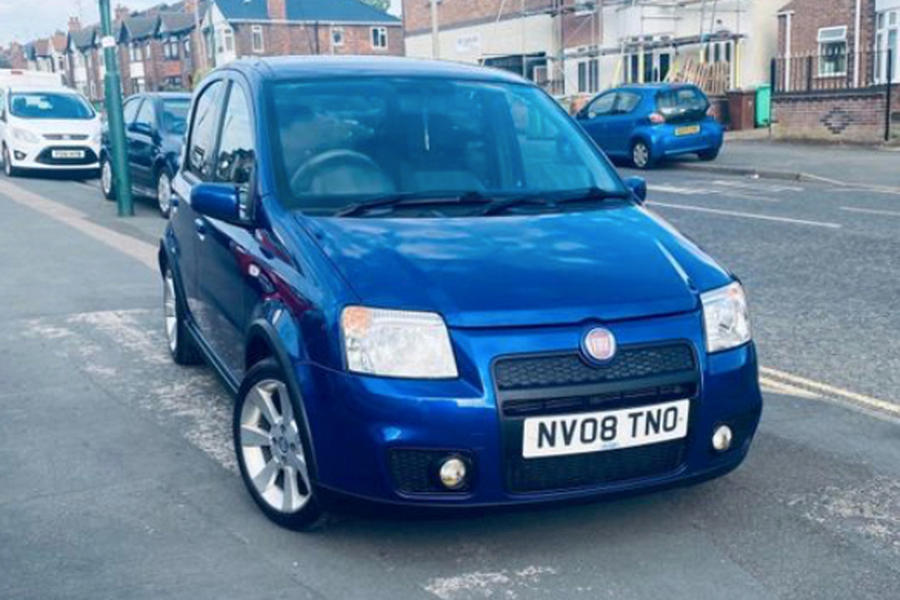 Fiat Panda 100hp, £2750: Can you imagine a more cheerful and approachable hot hatch than this? Less than £10,000 in 2008 would have nabbed you the hopped-up 100hp version of Fiat’s reborn Panda, which remains to this day one of the best examples of accessible performance. Alongside the hike in power, it was lowered by 25mm over the standard supermini on stiffer springs and dampers. It also gained rear disc brakes from the Panda 4x4 and a tantalising ‘sport’ button. It’s getting rare already, but you can still find one for a sensible price. Our find looks extra purposeful in its clean shade of blue, sounds sensibly cared for at 77,000 miles and is up for just £2750. 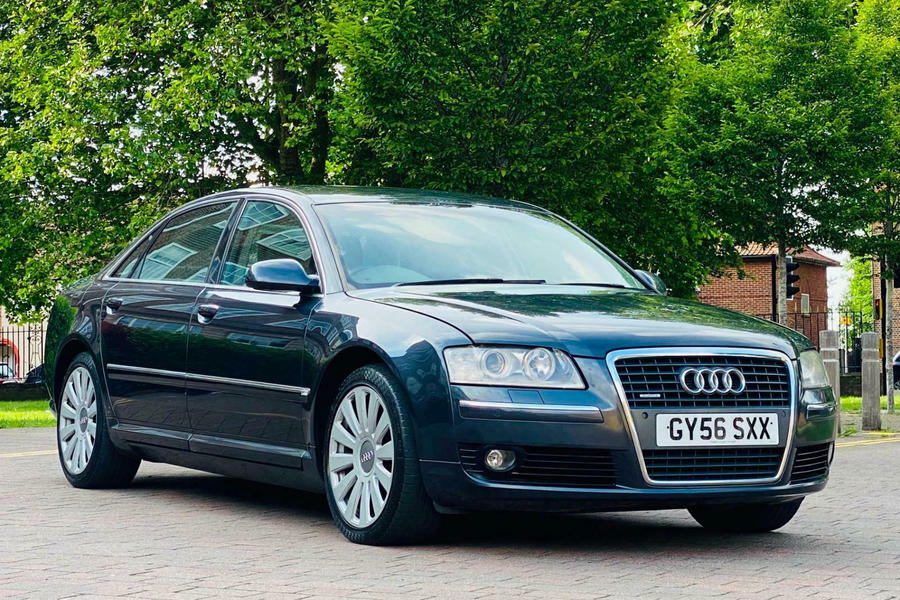 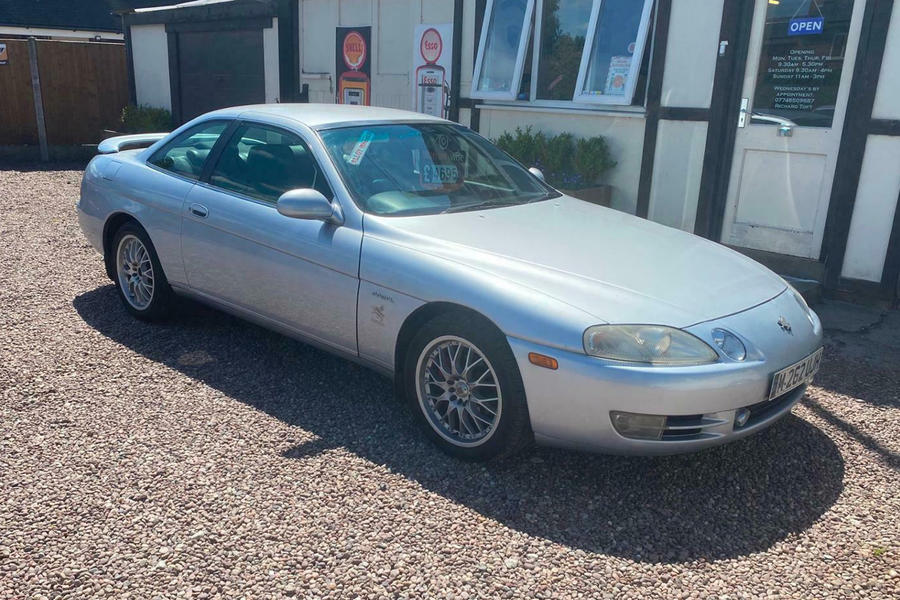 FELIX PAGE: What’s going out of fashion faster, the V8 engine or diesel? Neither ranks highly on today’s lists of what’s hot, which is a shame because it means we will never see a mainstream car offered with an oil-burning eight-pot motor again. Take this old Audi ’bahnstormer, for example: it weighs two tonnes yet can do 0-62mph in 5.9sec and crack 30mpg. Wonderful.

JACK WARRICK: Nothing says ‘brute’ like a chunky sports coupé from the late 1990s. And the Soarer is endangered in this country, at least, because it was never sold here under the Toyota name. But you won’t be thinking about that when you get an earful of that glorious naturally aspirated 4.0-litre V8. A 0-62mph time of 5.8sec, too.

FP: In a rare bout of humility, I will concede that your Toyota looks the part. But I don’t like the sound of its aftermarket LPG conversion: why would the owner want so badly to make their ’90s V8 coupé cheap to run?

JW: Well, the money they saved must have gone into caring for the rest of the car, because there’s not a single scratch on it. Besides, I can’t accept that complaint from somebody who has opted for a diesel. You’ve harked on about your wonderful MPG, but it has 195,000 miles under its wheels, so I don’t think James would be getting peak performance from it...

FP: It’s an Audi, so I’m sure that it feels absolutely factory-fresh (I say, knocking on every wooden surface I can find).

JW: At the end of the day, a V8 Sunday driver shouldn’t look like a private hire car. Game, set and match.

Verdict: My V8 cruiser has to look the part, so that Toyota is a sure bet.