BACK TO ALL NEWS
Currently reading: 25 years of the Renault Clio - picture special
UP NEXT
Hope for Bloodhound LSR project as sponsor talks start again

Over its 25 years in production, the Renault Clio has become one of the UK's most loved hatchbacks
Open gallery
Close

On the 29 March 1991, the Renault Track day diary: Clio was launched in the UK. Since then, it has found fame and fortune both as an everyday transporter and, with performance specials such as the Clio Williams of 1993 and latterly the RS 220, a hot hatch.

In total, more than 13 million Clios have been sold around the world since the car's launch - in hatchback, saloon and estate forms - with 1.2 million of those finding homes in the UK. As the Clio turns 25, we celebrate the pivotal moments in its history. 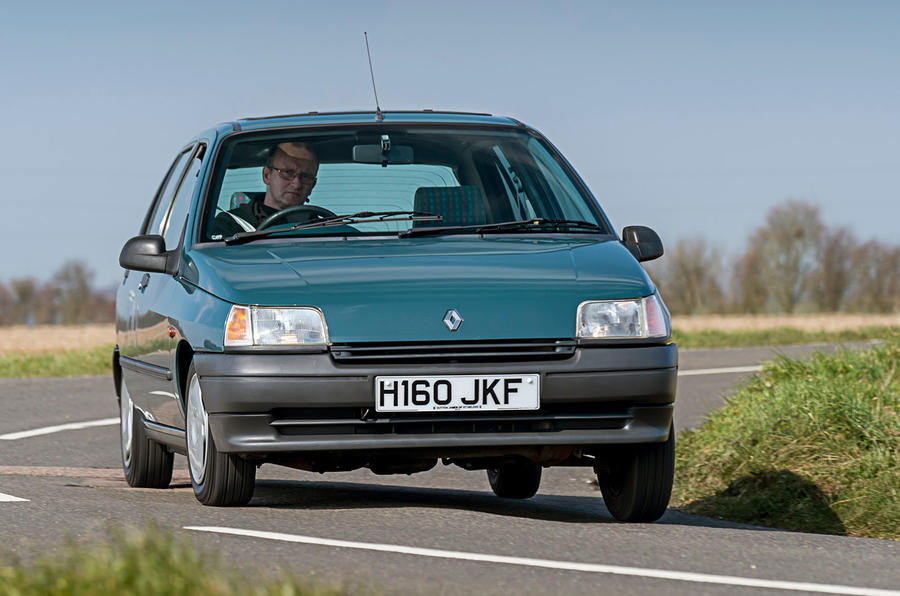 At the Paris motor show in 1990, Renault introduced its new supermini to the world. The Clio name, taken from a Greek word meaning 'made to make famous', was given to a car that would largely replace the ageing Renault 5. The Clio was longer and wider than the 5 and had a longer wheelbase designed to offer better ride comfort and handling. 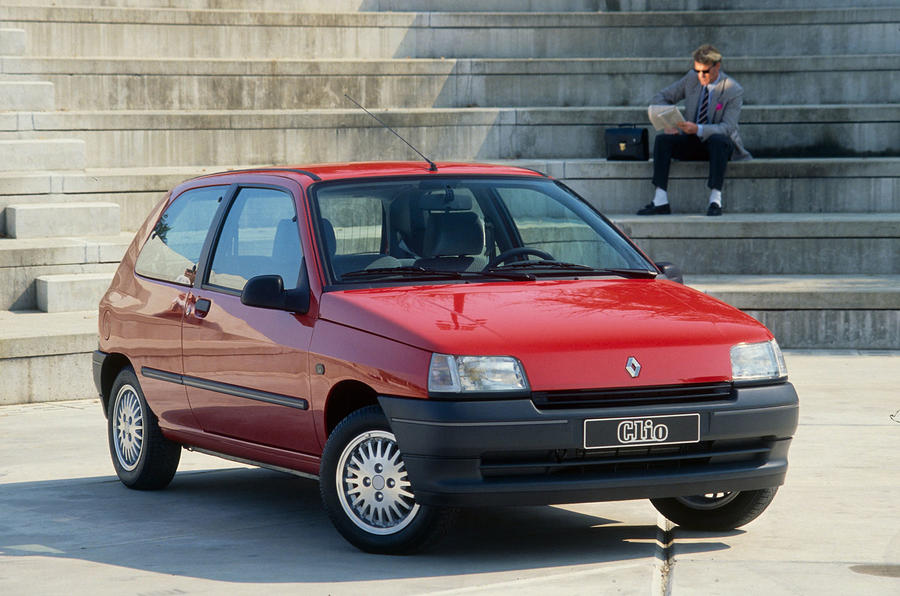 When the Clio first landed on UK soil, it was fresh from winning the title of European Car of The Year, having beaten off competition including the Nissan Primera and Vauxhall Calibra. The UK range started at £7190, which translates to around £14,600 in today's money. Power came from a range of 1.2 and 1.4-litre petrol engines, while the top-end RT models sported luxuries including front electric windows, remote locking and a stereo radio and cassette. A total of 21,124 Clios were sold in the UK in 1991. 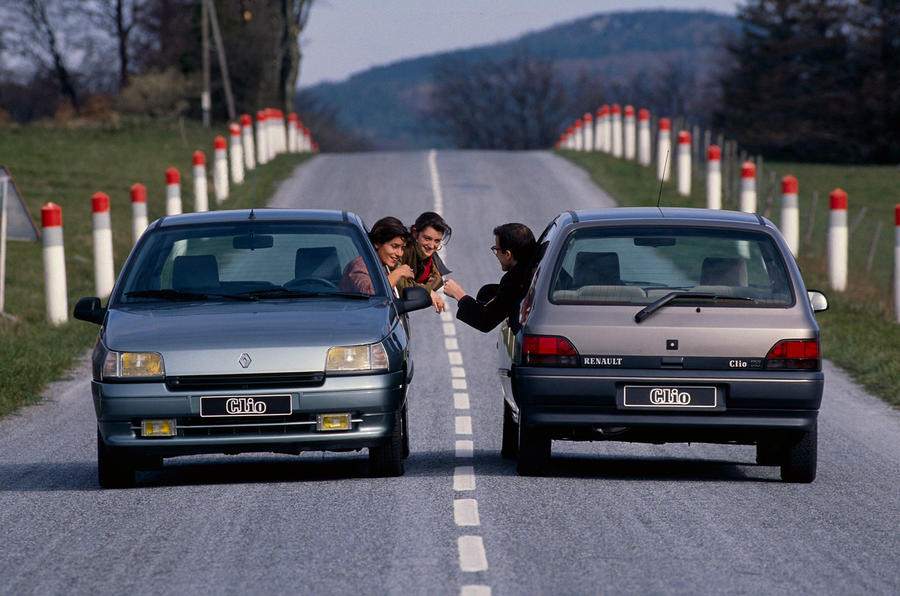 As the Clio continued to gain favour in the UK, Renault added a 1.9-litre diesel version and a performance-orientated 1.8-litre petrol model. In its first full year on sale, 34,701 Clios were sold in this country. 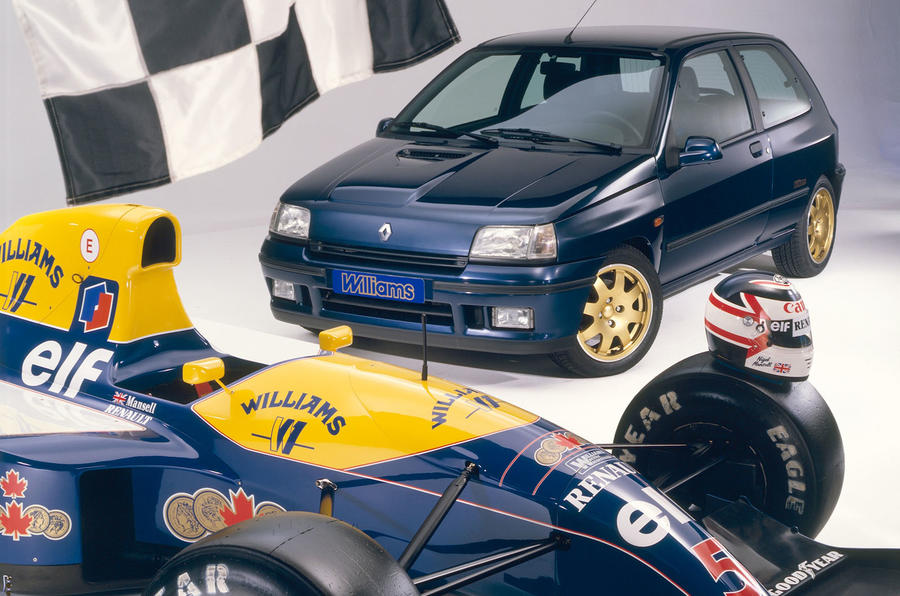 Renault originally launched the Clio Williams in a limited-edition run of 3800 cars, but such was the popularity of the car that it ended up building another 1000 or so more. The car was named to celebrate Renault's partnership with the Williams F1 team and featured a 2.0-litre petrol engine with 145bhp. Such was the model's popularity that it has secured a place in the hot hatchback history books. 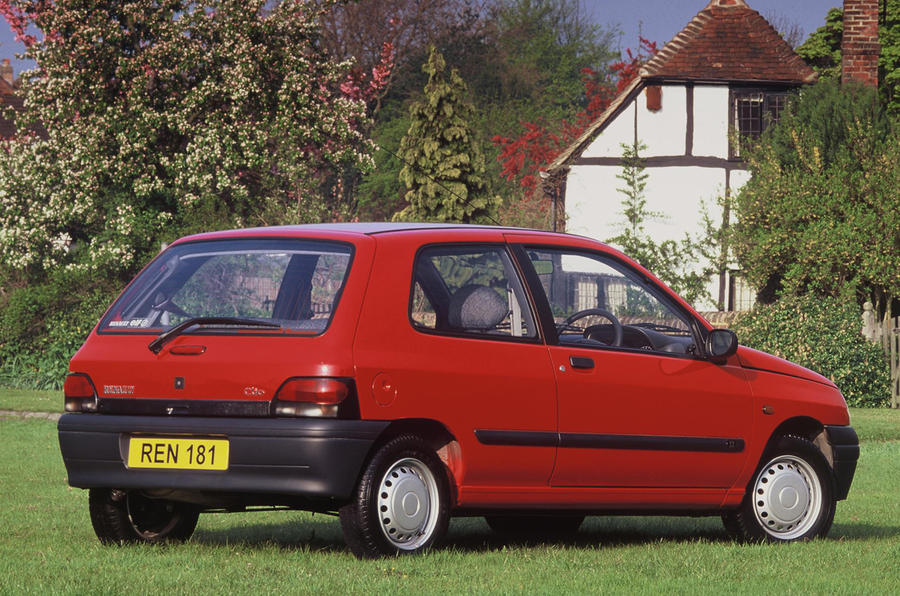 A 'phase 2' version of the Clio was released in 1994, bringing with it minor styling changes inside and out. By this point, the Clio accounted for 49% of Renault's sales in the UK. A second facelift came in 1996, and with it came tweaked styling and the option of a new 1149cc engine first used in the Twingo. 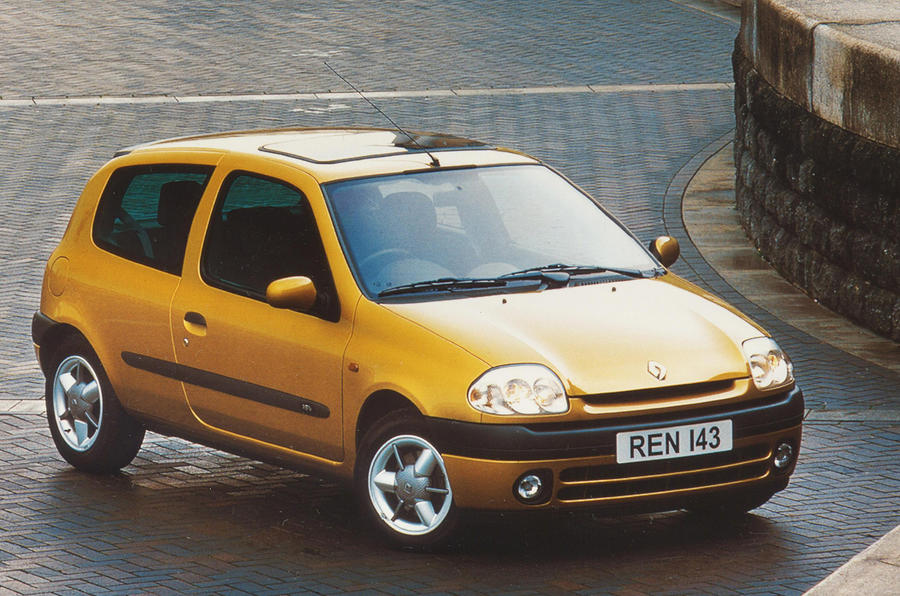 The second generation of Renault's family favourite was again larger than the car it replaced and featured more rounded styling. Weight-saving materials such as aluminium were used, and larger seats fitted to the interior in a bid to improve refinement. New safety equipment was also available, including front side airbags and ABS.

Following a series of minor changes made to the Clio in 2000, Renault fully facelifted the car in 2001, bringing tweaked styling and a new 1.5-litre diesel engine. In 2002, Renault sold 86,337 Clios in the UK - the car's best year in its history. 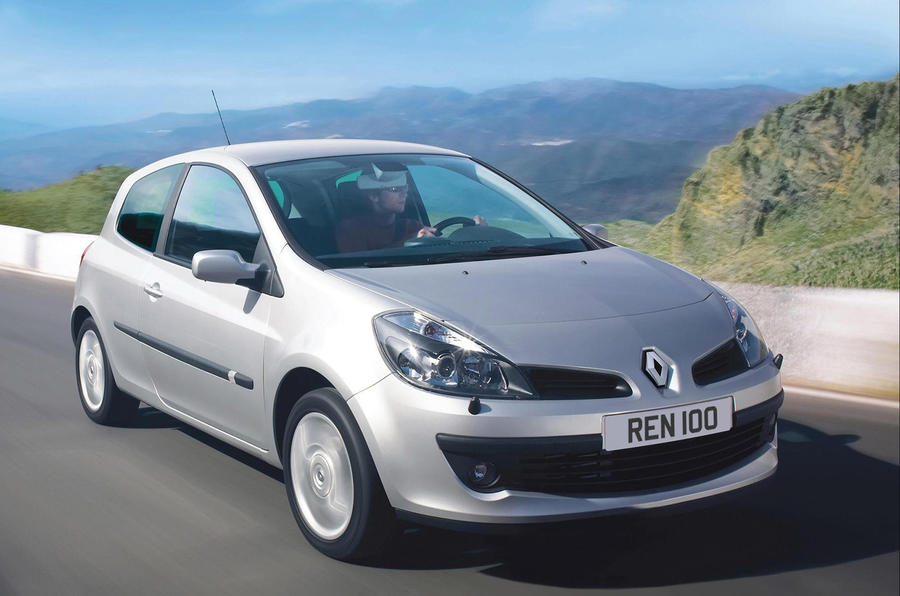 At the Frankfurt motor show in 2005, Renault introduced the third-generation Clio to the world stage. It entered the UK market in August of that year. It was larger again than the Mk2 Clio, and came with a five-star safety rating from Euro NCAP. Renault worked to give this small car features typically associated with bigger models, including a tyre pressure monitoring system, soft-touch materials inside and a keycard instead of a traditional key. In 2006, the Clio was again awarded the title of European Car of the Year, this time seeing off competition from the Volkswagen Passat and Alfa Romeo 159.

The latest Clio morphed into an updated 'phase 2' model, which saw the introduction of a new GT variant which was designed to help bridge the gap between the regular road car and the hotter Renault Sport derivatives.

At the Paris motor show in 2012, Renault's head of design Laurens van den Acker opened a new chapter in the history of the Clio, unveiling the fourth-generation model to a waiting crowd of journalists. Designed to ape the styling of previous Clios, the new model was inspired by the DeZir concept of 2010, and featured a range of naturally aspirated and turbocharged petrol and diesel engines. 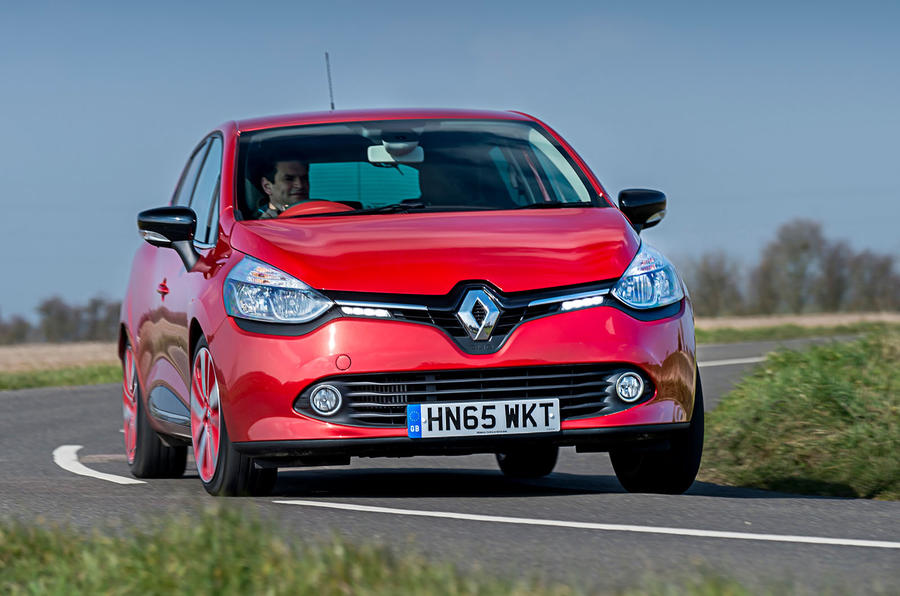 2016 and beyond - laying the ground for the next Clio

At the 2014 Paris motor show, Renault showcased the Eolab concept car. While not directly previewing the next Clio, officials admitted that technology seen on the car, including its more aerodynamic shape and frugal petrol-electric powertrain, would be used to inform the new car, tentatively due to arrive in 2018. 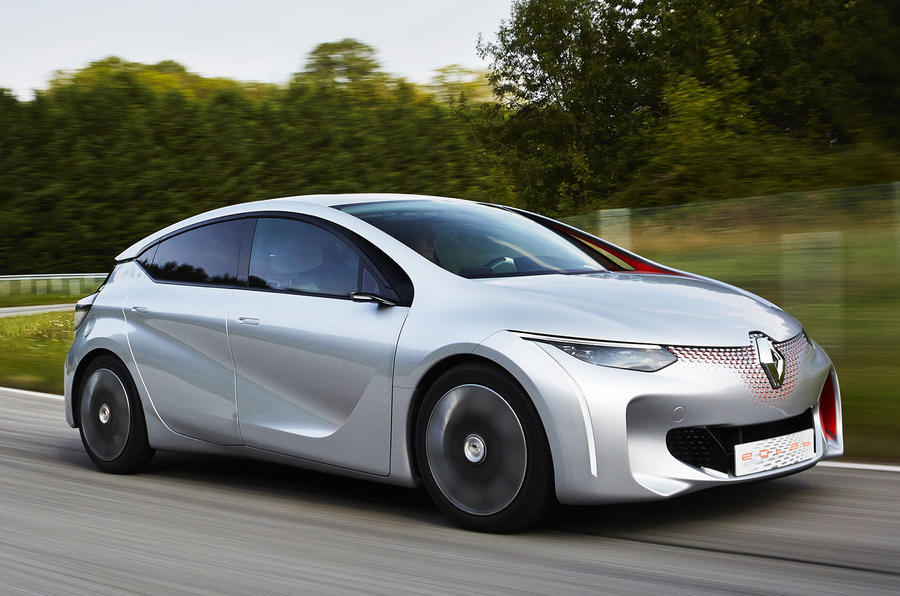 Last year our sister website Pistonheads produced a video comparing every generation of hot Clio on track. You can view it below.

I liked my former 2.2 1.6 16v Dynamique !
A very good handling, very predictable.
The only bad point was the electric power steering.

I still think the Mk1 and Mk2 were the best-looking Clios by a long mile. The Mk3 was ruined by the 2009 facelift and I've never been truly convinced by the Mk4 Clio. I test-drove a 1.5 diesel and it was just as loud as the Mk2 but considerably less fun to drive. Shame, really. We had a Mk2 in the family and it was an absolutely terrific little car - never gave us any bother.
the instigator 29 March 2016