BACK TO ALL NEWS
Currently reading: Under the skin: how Volkswagen's DSG gearbox predicted the future
UP NEXT
Exclusive: Morgan bosses detail ambitious growth plans

Under the skin: how Volkswagen's DSG gearbox predicted the future

Dual-clutch transmissions (DCTs) hit the big time after Volkswagen first introduced one on the Golf R32 back in 2003.

To date, VW has made well over 26 million of its direct shift gearboxes (DSGs), and it’s not alone. The standard had previously always been the torque converter automatic (slush) gearbox and, on a few small cars, perhaps a teeth-grindingly awful continuously variable transmission (CVT).

DCTs are fun to use because they shift gear with no interruption of torque from the engine. In a conventional manual gearbox, de-clutching interrupts the torque to disengage each gear and engage the next. Torque is reinstated by closing the clutch again and opening the throttle.

In a DCT, each clutch is allocated to roughly half the gears. So, for instance, as first gear is engaged and driving through ‘clutch one’, second gear is pre-selected through ‘clutch two’, which stays open. When the driver selects second gear, clutch one opens and clutch two closes, taking up the drive simultaneously with no interruption of torque. And so on.

VW may have been the first company to launch DCTs in big numbers with its DSG, but it wasn’t the first to get one running. Neither were Porsche or Audi with the deliciously named Porsche Doppelkupplungsgetriebe (PDK), which graced the 956 and 962 racing cars and Sport Quattro S1 rally car.

No, the first working prototype DCT was developed in Leamington Spa by Automotive Products in 1980 and called the hot-shift automatic gearbox. The concept may have been hampered by snail-pace electronics, but the name was excellent. Conventional torque converter gearboxes are not that well suited to small engines, and especially weren’t back then, when power consumption from a torque converter was relatively high – and that’s what prompted the idea.

In terms of basic layout, modern DCTs are similar to AP’s brilliant hot-shift design. It had one dry clutch and one wet (running in oil). VW’s first family of DCTs were wet clutch transmissions capable of handling up to 258lb ft torque. The clutch packs – developed by BorgWarner with the trademark DualTronic – are concentric (one inside the other) to save space and the clutches could be smaller thanks to the lubrication. VW launched the seven-speed DSG for compact cars in 2008. Because the torque capacity would be less at 184lb ft, the clutches were dry to reduce drag, but slightly larger in diameter with thicker friction linings to combat wear, and had a design life of 186,000 miles.

You’ve probably already figured out that the reason these mechatronic marvels happened at all is because they’re super-efficient, save fuel and reduce emissions. In theory, they should also deliver the ultimate driving experience, but maybe sometimes you just can’t beat a manual for thrills.

Wet behind the gears 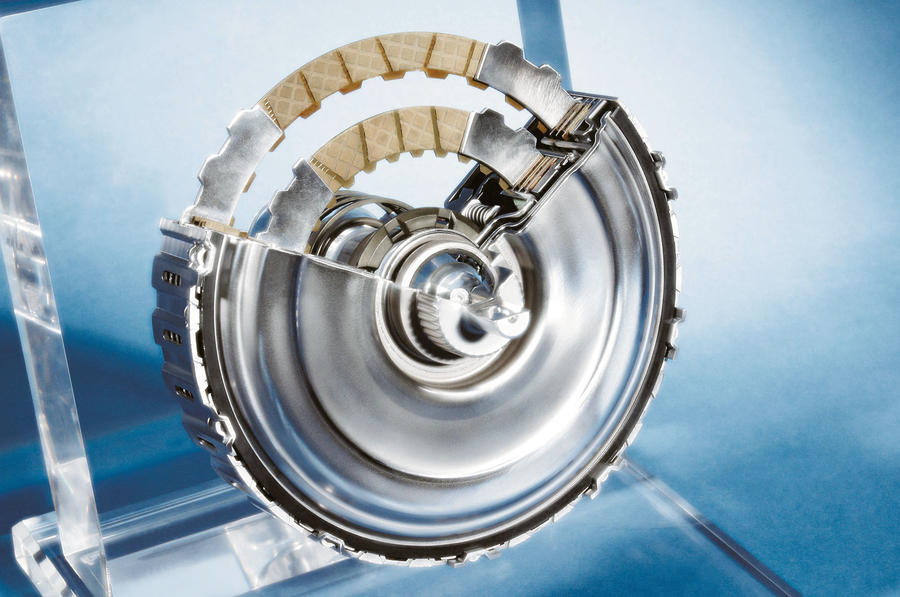 The clutches in Volkswagen’s original six-speed DSG are ‘wet’, which means they run in oil to reduce wear. That means they can be smaller and concentric, packaged one inside the other in this neat unit.

Under the skin: the latest CVT gearbox technology​

Under the skin: the technology behind torque vectoring​

All of this is very interesting but unfortunately is totally irrelevant. Within 5 years electric or fuel cell driven cars with electric drives will make significant inroads into the general car market and within 10 years they will dominate. Electric drives don't need gear boxes or clutches.
Grant revan 14 May 2019

I agree. Dsg reliability a huge issue. Mine went pop at 48000 miles. Vag unwilling to help... Loads of others with same problem. Specialist I went to had a 6 week waiting list.. Known issue but no recall... Just a service update reducing hydraic pressure... A band aid to cover a gaping wound. Wont buy another. Shame on you Vag.
eseaton 13 May 2019

I hated it so much I traded it in after 10 days.

I can still recall the rage I experienced driving it at specific places on the road.

Easily the worst car, and worst gearbox, I have ever had the foolish misfortune to inflict on myself.