BACK TO ALL NEWS
Currently reading: Under the skin: the latest CVT gearbox technology
UP NEXT
First drive: New 2021 Bowler Defender Challenge racer

Under the skin: the latest CVT gearbox technology

Toyota’s umpteenth incarnation of the Corolla is now on sale, mainly in Hybrid form. It’s billed as having an ‘e-CVT’, which at first had our news antennae all a-quiver.

In fact, e-CVT is simply another marketing moniker for essentially the same hybrid driveline concept Toyota came up with in the 1990s for the first Prius and has stuck with ever since. Originally called the Toyota Hybrid System (THS), it then also became Hybrid Synergy Drive (HSD), giving a nod to the fact that it was also used by Lexus and even sold to a couple of other car makers.

Swapping cogs, gear changing, shifting: whatever your favourite expression, gearboxes and cars go together like sticky toffee pudding and custard – unless it’s a CVT. Some drivers loathe the way a CVT’s soaring engine revs are disconnected from the car’s rate of acceleration – known as the ‘rubber band effect’.

The CVT was made famous by DAF when it launched the first production version, the Variomatic, in 1958. Instead of a complex box of cogs, it consisted of two pulleys of continuously variable diameter, connected by a belt. To give the lowest ratio (like first in a manual), the engine-driven pulley is at its smallest diameter and the second pulley, driving the wheels, at its largest.

As speed increases the engine-driven pulley gets bigger and the drive pulley smaller, increasing the ratio – so the car speeds-up. Controlled not by a computer but by a vacuum, it continuously and automatically adjusts for hills and harder acceleration or cruising. The design has been used by many manufacturers over the years, including Audi, Ford and Fiat.

CVTs are not all alike, though. Although Toyota offers a CVT in the new Corolla (but not in the UK), its hybrid drive e-CVT is nothing like the original Variomatic and there’s no belt. Instead, it consists of two electric motor-generators (MG1 and MG2) connected to a planetary gearbox. The whole caboodle has the engine at one end and the driven wheels at the other.

Planetary gear sets exist aplenty inside conventional automatics. The compact package consists of a sun, planets and an enclosing ring gear and resemble a desk toy of the solar system. There are only a few components, but making the drive take different routes through the mini solar system allows the two motor-generators to perform different roles.

MG1 can start the engine and at other times act as a generator to charge the hybrid battery. MG2 can act as a drive motor on its own or with the engine and also a generator to perform a regenerative braking role. MG1 can also apply small amounts of torque to the gear set to control the balance between the engine and electric drive from MG2, and there are many more combinations. The system allows electric-only drive by decoupling the engine (without the need for a clutch), and it’s small and compact.

So not all CVTs are what they seem. This latest one is clever and mega-efficient, and it’s not surprising the basic idea has endured for more than 20 years. 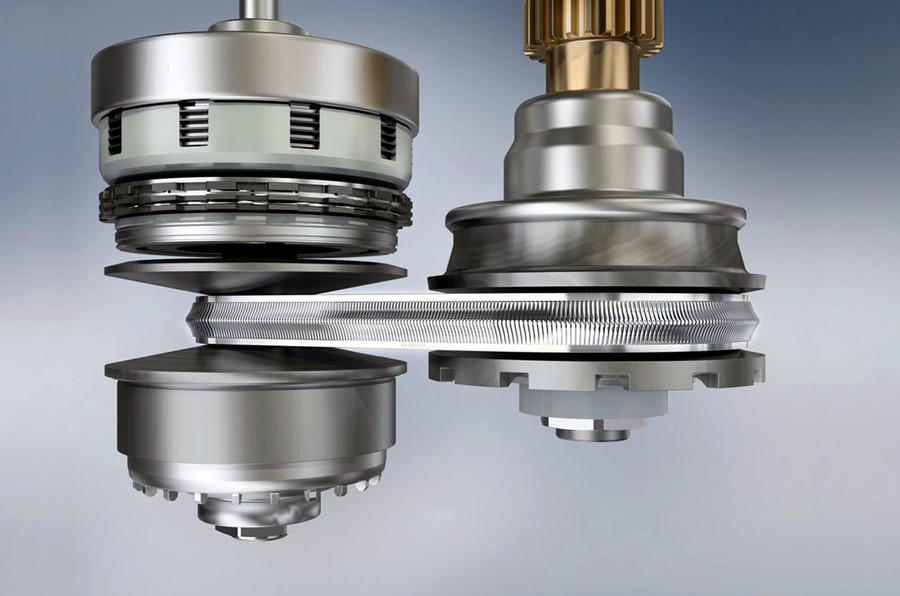 Bosch’s electronically controlled version of the original CVT remains mechanically simple. Despite CVTs being scorned by some, Dutch rallycross star Jan de Rooy dominated with his DAF 55 and 555s in the 1970s. DAFs were banished to their own category in the annual Dutch backwards racing championship (yes, really, it used to be a thing) because CVTs enabled them to drive as fast in reverse as forwards.

Under the skin: the technology behind torque vectoring​

Under the skin: how turbochargers have evolved​

The Prius is to me still a marvel, staggeringly reliable and that drive train is very very clever, we managed to overhaul my brothers battery last year, easy peasy !

Why an e-CVT when you can have an MHT?!

That tells you everything you need to know about driving a CVT equipped car.

Get yourself an MHT (standard vehicle with a pair of clutches/Torque Converters and electric motor between engine and auto gearbox) FAR superior to the e-CVT.

I have a Mitsubishi Outlander PHEV, which has CVT. I asked the dealer how it works - but he'd no idea. It seemed unlikely to be via rubber bands. I guess now from the article that it uses the planetary gear system but the annoying thing is that I actually invented the bloody system when I was at school over 60 years ago! A mechanic friend made a model of the gears for me but I never got round to installing the electric motor to drive the outer ring, never mind applying for the patent. Ah well!

I do believe that the Mitsubishi Outlander (and the latest honda Hybrids) have a single fixed gear between engine and driven wheels, and the CVT effect is as a result of the series hybrid configuration ie at low speeds, the engine drives a generator which in turn drives the wheels via an electric motor. Only at higher speeds when direct drive is engaged is there a mechanical connection between the engine and the wheels. It's a very simple arrangement, but I suspect not quite as efficient as the Toyota system.

Well done Jesse Crosse for explaining how the eCVT works and why there is a disconnect between engine and wheels. I accept that this this system may not applease some enthusiasts / traditionalists, but there is no denying its cleverness and efficiency. And Ford clearly recognises the system's virtue since it uses a license built copy in the current Mondeo hybrid!

Mondeo CVT, no endorsement there

I...And Ford clearly recognises the system's virtue since it uses a license built copy in the current Mondeo hybrid!

Which WhatCar described as "...but on a typical UK journey which can take in a broad mix of roads and speeds it feels out of its depth.  All too frequently you end up squeezing the accelerator virtually to the floor in order to get sufficient acceleration, which negates any attempt at saving fuel.  Then there’s the unseemly cacophony that goes with it"

Tilling-Stevens would be having a laugh now. They became one of the biggest commercial vehicle makers mid last century based on this system.