BACK TO ALL NEWS
Currently reading: Under the skin: How Porsche is 3D-printing pistons
UP NEXT
New BMW M3 Touring due in 2022 to rival Audi RS4 Avant

Under the skin: How Porsche is 3D-printing pistons

Additive manufacturing – a sophisticated form of 3D-printing – has been used in the car industry for years now for rapid prototyping of components, but its use for making production parts has been gathering pace, too. Now Porsche has succeeded in 3D-printing some of the most highly stressed components in the 911 GT2 RS engine: the pistons. The new pistons are 10% lighter than the originals, allowing the engine to rev 300rpm higher and develop almost 30bhp more power.

Pistons in a high-performance engine are subjected to massive stress from loads and heat and are usually cast or forged from aluminium alloy. Porsche has worked with Mahle and printer manufacturer Trumpf to develop the cutting-edge laser metal fusion process. Drawing on data taken straight from the design computers, pistons are formed by fusing powdered aluminium alloy in 1200 layers, one layer at a time.

Topology-optimisation software is used to identify areas where the forces are higher so that exactly the right amount of material is used in each area. Temporary support structures are incorporated in the design of the piston to prevent sagging and deforming while the alloy is still hot from the heat of the lasers. The structures are formed like honeycombs inside areas like piston pinholes that would be machined anyway, to avoid any additional work to remove them later.

New features can also be incorporated into the design that wouldn’t be possible using traditional casting techniques, where molten metal is poured into a mould, or forging, where it’s pressed into shape. In this case, Porsche has been able to introduce an internal cooling duct, like a tunnel running around the circumference of the piston. Cooling oil running through the duct helps reduce the temperature of the piston by 20deg C in the crucial area behind the piston rings that seal the piston to the cylinder. The duct is fed by tiny 3D-printed oil jets, which are too intricate to be made using traditional techniques.

The software draws on ‘bionic’ design found in nature to add strength. A cross-section of a piston looks eerily like a cluster of muscles and sinews. Five pistons can be made in 12 hours for the purpose of the current project, but that could be increased to 15 pistons using a more sophisticated version of the printer.

It’s an expensive process at this stage, and more technical work is needed to ensure consistent quality, but the technology could be used for series-production car engines in the next five years. Porsche is looking at other components, too, such as turbocharger intercoolers, for improving cooling flow and surface area. It’s also working on electric axle drives with integrated oil coolers, which can be made with fewer parts using the technique and are faster to assemble, twice as rigid and 10% lighter. 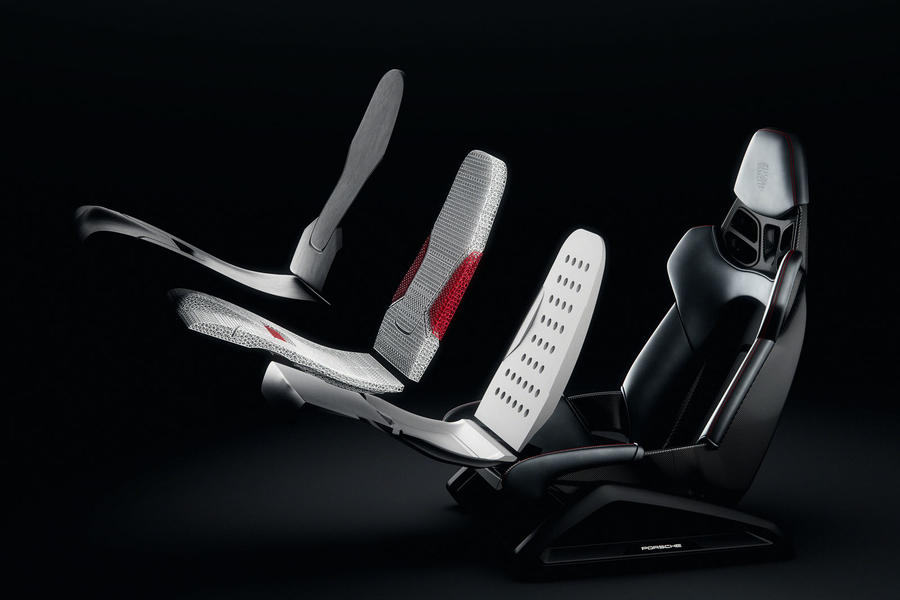 Porsche’s plans include offering customers 3D-printed bodyform full-bucket seats with a shell made from expanded polypropylene bonded to a breathable ‘comfort layer’ made from 3D-printed polyurethane-based materials. Forty prototypes will go into race cars first, but street-legal versions will be on sale from 2021 in three different levels of firmness. Fitting to the body contour of individual customers may be available later.