BACK TO ALL NEWS
Currently reading: New Porsche 911 Turbo arrives with 572bhp flat six
UP NEXT
Mazda to launch own version of new Toyota Yaris by 2023

Porsche has revealed the new 911 Turbo in Coupé and Cabriolet forms, following the launch of the top-rung Turbo S version earlier this year.

Power is sent to all four wheels through an eight-speed PDK automatic gearbox, as found in the higher-powered car, while Porsche’s Traction Management active four-wheel drive system can send more torque to the front axle than in the previous generation.

The new addition to the range resembles its more powerful sibling with sizeable air intakes in its widened rear arches and a prominent variable rear spoiler, but it's set apart by its four square exhaust tips, as opposed to the twin tailpipes featured on the 911 Turbo S. 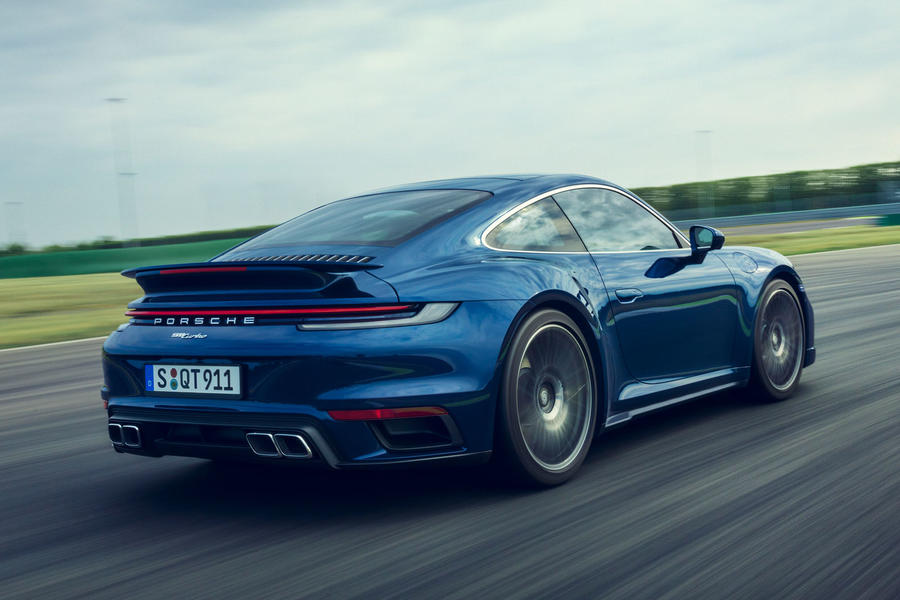 The 911 Turbo is equipped with Porsche Active Suspension Management (PASM) as standard, which is claimed to offer a balance between responsiveness and comfort, while the optional PASM Sport system stiffens the suspension and drops the ride height by 10mm in the name of enhanced agility.

Optional dynamic upgrades come in the form of hydraulic active anti-roll stabilisation and a set of ceramic brakes with ten-piston calipers on the front axle. The Lightweight Design package shaves 30kg off the car's kerb weight with the use of lightweight bucket seats in the front, the omission of the rear seats and less insulation material, while the Sport Design package brings bespoke rear light designs as well as black and carbon trim elements.

The interior is familiar from other models in the latest 911 line-up, featuring a 10.9in central infotainment screen and Porsche’s Advanced Cockpit digital instrument display.

The 992-generation 911 line-up is expected to be nearing completion, following the recent unveilings of the manual version and the 911 Targa, with the hardcore, track-focused 911 GT3 set for an unveiling later this year.

But do you really need to pose this fast? You can hardly use the performance of the cooking 911, never mind this one.
We must be nearing the physical limits of attainable performance surely.
Peter Cavellini 16 July 2020

But do you really need to pose this fast? You can hardly use the performance of the cooking 911, never mind this one. We must be nearing the physical limits of attainable performance surely.

. No mate, in America there are 911's running with 1200, 1500 BHP, admittedly I don't know if there day to day cars, but, engine block must be able to stand the extra power created?

I've ran out of superlatives for this car. Surface to say, it's the number one car in the world. Period.
View all comments (5)