BACK TO ALL NEWS
Currently reading: Under the skin: How manufacturers are preserving pistons
UP NEXT
New Audi S3 Sportback and Saloon arrive with 306bhp

Under the skin: How manufacturers are preserving pistons

Hyundai and Kia have unveiled an innovative new petrol engine design, and they're not the only firms committed to saving internal combustion
Share
Close
Share story

“Reports of my death are greatly exaggerated,” said Mark Twain after an erroneously posted obituary. It’s pretty much what every internal combustion engine would say, too, if they could speak. While hysteria over the car’s contribution to emissions reaches epic proportions, engineers everywhere are working hard to improve internal combustion engines (ICEs) to drive toxic and CO2 emissions down.

The Hyundai Motor Group’s new CVVD (continuously variable valve duration) technology is the latest ICE development to break cover. It’s another example of how new engineering techniques are enabling engineers to revisit the engine fundamentals to leap technical barriers that were once insurmountable. CVVD on the new Smartstream G1.6 T-GDi engine, to be fitted to both Hyundai and Kia cars, improves performance by 4%, fuel efficiency by 5% and emissions by 12%.

Inlet and exhaust valves in the cylinder head of an engine let fuel and air in and exhaust out. When they open and close and by how much depends on what an engine is designed to do. Valves are opened by cams, offset lobes positioned along a camshaft, one for each valve. So a four-cylinder four-valves-per-cylinder twin-cam engine would have an exhaust cam and an inlet cam, each with eight cam lobes, one for each valve.

The shape of the cams is designed to control the lift and the duration (length of time they stay open). How progressively they open and close and at what speed is down to the shape of the cam. In engine tuning, there are lots of different camshafts to choose from to give the characteristics the engine builder wants. The design for a normal, tractable family car engine at one end of the scale will be totally different from the ‘hot cam’ of a race engine at the other.

Clever tech such as BMW’s Vanos varies the valve timing (when the valves begin to open and in relation to the position of the piston and moment of combustion). A second system, Valvetronic, can alter valve lift. Used together, both timing and lift are variable. The ingenious Multiair system, developed by Fiat Powertrain Technologies with the Schaeffler Group, can vary both timing and lift with some cunning electro-hydraulics. Jaguar Land Rover also uses a version of the Schaeffler tech on its Ingenium petrol engine.

Honda’s famous VTEC cam-switching system is devilishly clever but simple by comparison. It has two cam lobes per valve arranged in pairs on the camshaft. The engine can select a softer, more tractable profile at lower engine speeds and switches to the hotter profile to get more gas in and out at higher revs for maximum power.

CVVD works on the inlet valves (but can be applied to the exhaust valves, too) by moving the centre line of the camshaft slightly from side to side, altering the position of cam lobes on the valves. CVVD is yet another step forward in the history of the ICE, and although most bases in terms of engine breathing have probably been covered now, don’t be surprised if engineers find some more tweaks to improve efficiency still further over the next few years. 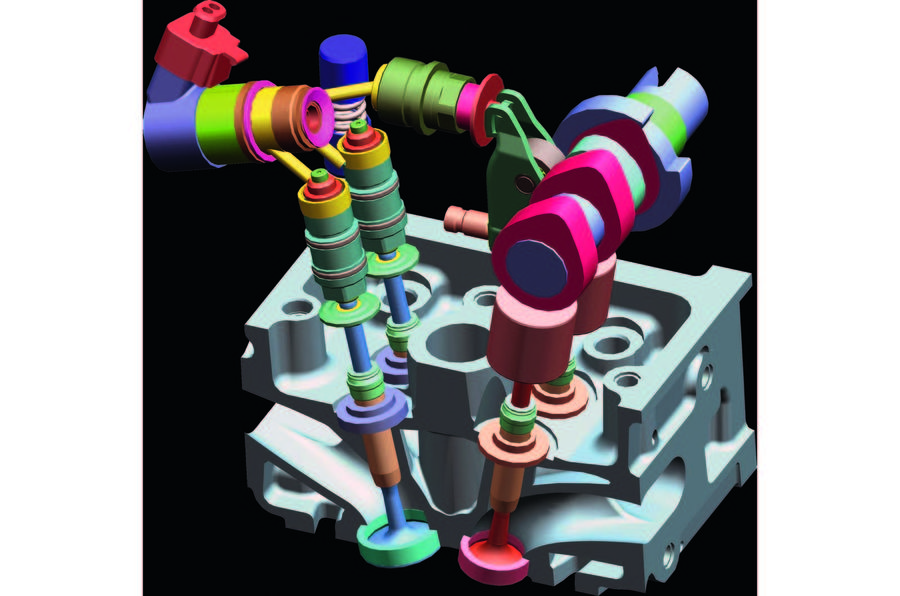 Fiat’s Multiair system can control lift and, to a lesser extent, timing but not duration. Instead of acting directly on the top of the valves, the cams operate tiny oil pumps in the cylinder head, generating hydraulic pressure to open the valves. Electronically controlled bleed valves can release pressure to alter how much the valves open and make them open later or close sooner.

Opinion: Why we should buy new, cleaner-than-ever diesels

Under the skin: How Mazda is changing internal combustion​

29 July 2019
As a convert to Electric , and having huge expense over 30 years dealing with turbo failure , gesrbox issues,camshaft issues , DMF issues , rotten exhausts, cambelts etc etc, I've got to say I'm not really going to miss the internal combustion engine . The genius of electric cars are they are simple. Did car manufacturers take a wrong turn 120 years ago. Discuss !

I wonder how long before we get a proper camless engine in a motor vehicle? Surely doing away with all the cam drive mechanisms and various associated and complex doodahs for altering the timing and duration, we must now be technically capapable of operating the valves electronically with total control over when, how long and how far they open?

Most petrol-heads have discussed their favourite-sounding vehicles. I can think of many, including multi-cylinder petrols, two-strokes and electrics.

But what about the worst-sounding? I was passed by a car this morning that sounded like a bag of bolts inside a washing machine inside a cement mixer. It was no surprise, when it came into view, that it was a Mk4 Golf TDi.

1. Any vehicle with a 4 cylinder VW TDi engine

I cycle in London and coincedentally just the other day I was comparing the utter racket from an early BMW X3 Diesel - the one with the black plastic bumpers - which had just passed me to the extremely quiet - from the outside anyway - new Transit.