BACK TO ALL NEWS
Currently reading: Under the skin: How e-boosters can replace turbos
UP NEXT
Exclusive: Morgan bosses detail ambitious growth plans

Under the skin: How e-boosters can replace turbos

When the first prototype e-boosters came on the scene a few years ago, back-to-back comparisons with conventional turbochargers swiftly revealed what an improvement they made to the response of large-capacity diesels.

Until this point, the compressors, driven by an electric motor rather than exhaust gas, have only been used in short bursts before a conventional exhaust-driven turbocharger system takes over. Now, Aeristech, based in Leamington Spa, has come up with a new e-booster that can be used full time, doing away with exhaust-driven turbochargers altogether.

A turbocharger is driven by the energy released from hot, expanding exhaust gases. The harder the engine is working, the more energy there is and the quicker the turbocharger responds. When the engine isn’t working so hard, there’s less energy in the exhaust and turbocharger response gets laggy. Diesels are more thermally efficient than petrol engines, so more of the fuel is converted to mechanical energy rather than heat and the exhaust releases less energy. So when a diesel is loafing around, its turbocharger system really struggles to wake up and that’s when an electric booster can fill the boost gap.

One of the biggest enemies of a powerful electrical system is the heat it generates and controllers for e-boosters are no exception. Because the electric motors generate high torque, controllers quickly get hot, limiting the time motors can run without a break. Aeristech has rethought the design of the power electronics behind the e-booster to lessen the amount of heat it generates without reducing the torque. That means it can be used full time for boosting and replace exhaust-driven turbochargers.

The new electrical architecture separates control of the motor’s revs from the amount of torque it generates. Normally, both are controlled together, but under the new regime, the amount of heat generated by the controller is dramatically reduced. Not only can the motor be run for longer but it can be run much faster than usual. Typically, e-boosters are designed to run at up to 70,000rpm before the limitations of the electronic control system kick in. With the Aeristech design, there are no electronic limits and 48V e-boosters have been tested at up to 120,000rpm.

The benefit of switching to pure e-boosting is appealing on several levels. It could also be used on small, 1.2- to 1.5-litre downsized petrol engines, which, like diesels, produce less of the exhaust gas energy at low speeds that a turbocharger needs to work properly. Removing the turbocharger from the exhaust system means the catalytic converter can be moved closer to the engine to clean up tailpipe emissions more effectively, too. It also gets rid of the exhaust back pressure that a turbocharger causes, which ironically can be bad for fuel consumption.

The new control system can be used for air pumps as well, such as those needed in fuel cell stacks, and a booster could be used in conjunction with electrically heated e-catalytic converters to get on top of emissions even before an engine has been started.

Blink and you'll miss it 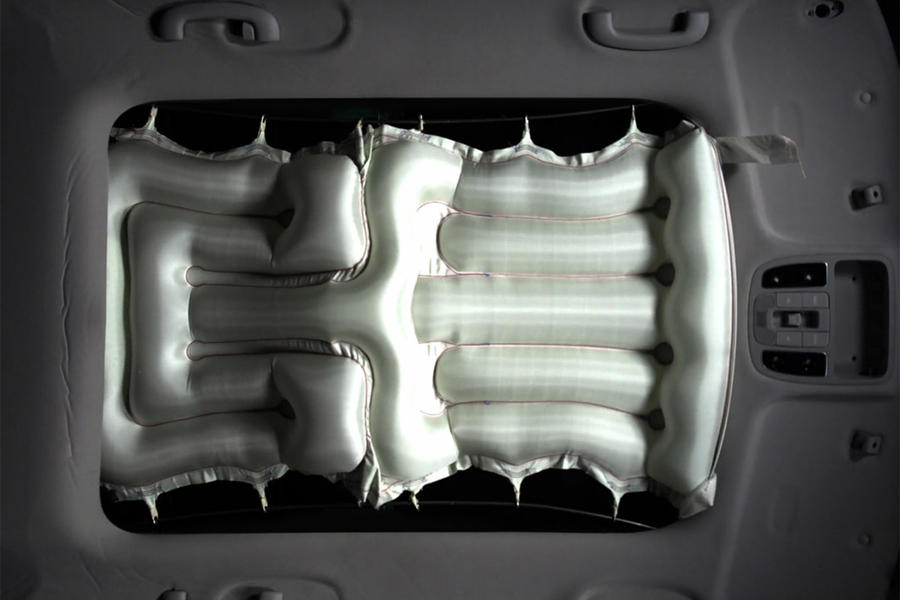 Hyundai parts supplier Hyundai Mobis is working on a novel roof-mounted airbag to prevent occupants from being ejected via a sunroof during a rollover. First revealed in 2017, the system is still being refined by the company but basically it deploys along two rails either side of a panoramic sunroof in 80 milliseconds, or about five times faster than the blink of an eye.

Just sounds like a load of nonsense to me, the energy cannot be created or destroyed type equation that someone is trying to rearrange for commercial gain. Regen braking for example (to "pay" for the energy required for the e-booster) will mean that coasting is not available because the alternator/starter motor wants the kenetic energy back etc so that's why F1 cars hardly have any back brakes etc, and you no longer hear "lift and coast" The heat this thing produces is all a form of inefficiency, that the inventor has managed to get it to work for extended periods is neither here nor there. There is no engineering free lunch is what I am rambling on about. Thats why Tesla use only 1 pedal dfor the most part although I understand the also have a dedicated brake pedal. This system despite what I have said may work well from an engineering perspective but just because something says "E" doesn't mean that it doesn't have to abide by the known laws of physics.

Surely there is some loss of efficiency with an e-booster, since it is actually taking energy from the electrical system instead of exploiting waste energy released in the exhaust gases? I can understand that throttle response is better and packaging is better but there must be some disadvantages too.

Surely there is some loss of efficiency with an e-booster, since it is actually taking energy from the electrical system instead of exploiting waste energy released in the exhaust gases? I can understand that throttle response is better and packaging is better but there must be some disadvantages too.

Yes, it still takes energy, but you can recouperate the energy while braking (using the starter/alternator).