BACK TO ALL NEWS
Currently reading: Hyundai-Kia pushing for autonomous technology
UP NEXT
Volkswagen ID 3 vs Nissan Leaf: Battle for the EV top spot

Hyundai-Kia has built a dedicated proving ground to develop autonomous vehicles and is targeting global leadership in the technology it admits it has been slow to develop to this point.

The vast 276-acre site, close to Hyundai-Kia’s existing Namyang proving ground in Seosan, South Korea, is run by the Hyundai-owned Mobis supplier firm, which has been contracted to develop autonomous vehicles.

The current fleet of autonomous vehicles, based on domestic market Kia K5 (Optima) saloons, are called M.Billy, which stands for Mobis Intelligent Learning Library. The fleet is a small one – just three vehicles across Korea, the US and Europe – but it will expand to 20 in 2019.

The autonomous development is being overseen by ex-Daimler-Chyrsler, Siemens and Conitental engineer Gregory Baratoff, who said Hyundai Mobis was a long way behind German firms in developing its own radars, cameras and sensors that are key to ensuring autonomous vehicles can operate, as well as the software that runs them.

He expects it’ll be 2021 before Hyundai Mobis’s Level 2 autonomous technology is a match for the German technology firms. “We’re behind the curve at the moment,” he said. “It’ll take four years to internalise the key technology and catch up with the likes of Bosch and Continental.”

From 2021-2025 it will then develop the most advanced Level 3-5 systems that will are needed to allow fully autonomous driving – should legislation ever allow it. Mobis than plans to commercialise the technology to sell to other companies, as well as use on Hyundai-Kia’s own vehicles.

The autonomous test facility includes 14 testing tracks, including a fake city with fake shops, junctions, traffic lights and roundabouts. It’s not only used for developing the cameras and sensors, but also the kinds of vehicle-to-infrastructure technology that will also be crucial if autonomous cars are ever to work in real-world circumstances.

Why the name M.Billy? “We want to make autonomous cars friendly,” says chief engineer Gregory Baratoff. The name might be a gimmick, but the technology isn’t. Autonomous ridealong stories have been told on these pages before, but the M.Billy demonstrated two impressive things on its trip around Hyundai Mobis’s fake city streets.

First, it used a roundabout. It waited while another car entered from the left, and then negotiated entry and exit behind that car. Next, we were overtaken by another car on a two-lane road, before being cut up and the car stopping in front of us – we were just as quick to move to the other lane and go round the new-found obstacle.

The technology remains very much in its infancy, and the speed at which it tackles situations that remain controlled are careful and considered. Yet it is nonetheless impressive to experience, with more life-like situations being tested and the car learning how to deal with them and think for itself by the day. 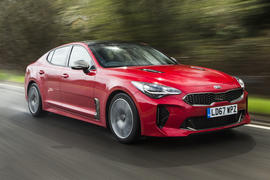 ... of having to 'push' for autonomous technology

I have visit 1st time on your