BACK TO ALL NEWS
Currently reading: Under the skin: The future of transmission tech
UP NEXT
Volkswagen ID Aero is EV Passat equivalent with 385-mile range

Pure-electric and electrified power units are steadily taking over, but the gearbox is here to stay
Open gallery
Close

A good engine can make a car but a bad gearbox can ruin it. Those almost unfathomable concoctions of gears, bearings, shaft seals and complex mechanisms almost always make the difference between a great drive and a mediocre one.

The gearbox has been underestimated, then, playing second fiddle to the engine; always the bridesmaid, never the bride. But electrification has given automatic gearbox designers a golden opportunity to have a greater influence on the way a car performs by integrating a hybrid electric motor-generator inside the gearbox casing instead of attached to the engine.

Transmission giant ZF Friedrichshafen has been steadily building a portfolio of hybridised automatic transmissions for years, giving car makers a kind of modular toolkit of gearboxes to choose from. They work in the same way as their conventional counterparts, except for the addition of an electric motor in place of a torque converter.

The external package is pretty much the same too, so they’re an easy fit. There’s no variable-transmission effect and the drivability feels the same as a conventional car, but the powertrain can harvest energy through regenerative braking or boost torque to the driveline from the electric motor-generator like any other hybrid.

ZF’s hybridised transmission range starts with a 20bhp 48V mild hybrid. This is followed by 54bhp and 121bhp full-hybrid, high-voltage versions and, at the top of the pile, a 134bhp full-hybrid version producing 295lb ft that can be used in both rear-wheel-drive and four-wheel-drive configurations.

The full-hybrid versions can decouple themselves from engines for driving in electric-only mode and incorporate electric pumps to keep the internal hydraulic mechanisms working when the engine is shut down for coasting or stop-start. More down-to-earth aspects of the gearboxes, such as torsional vibration dampers, can be tailored to suit an individual engine.

Gearboxes for pure EVs are much more simple, with, in most cases, a single-speed reduction gear to step down the speed of the electric motor from around 12,000rpm to a more modest road wheel speed. Smaller, high-speed electric motors (over 20,000rpm), which produce less torque but save weight and space, are paired with a two-speed automatic gearbox. But even simple single-speed ’boxes have more to them than meets the eye. Just to confuse things, Volkswagen’s ID 3 uses a two-stage single-speed gearbox.

The motor revs need to be reduced by times 10 at the wheels, and to do that with just two gears would mean the diameter of one of them would be too big to fit in the space available. Instead, the gearbox has two pairs of gears, the first reducing the revs from the motor by one stage and the second pair finishing the job. This is about as complicated as it gets for a single-speed reduction gearbox, and although they may be complex electronically, it’s a neat illustration of how mechanically simple pure-electric drive systems are – and how some of the most familiar and basic components will always have a role to play.

Life in the old dog 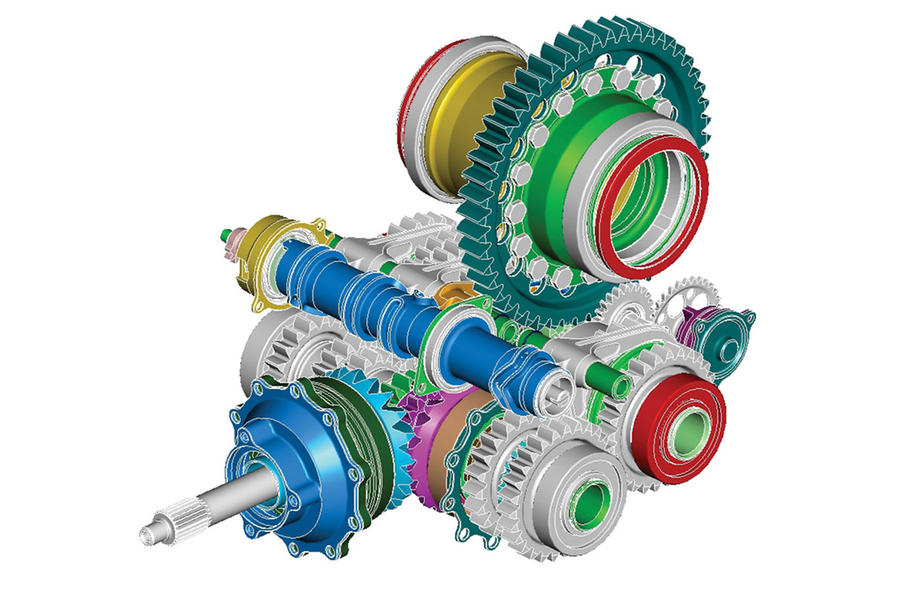 Sequential motorsport gearboxes like this older Ricardo design are ‘dog’ ’boxes without synchromesh, built for lightning-fast clutchless shifting. Gears are selected either via an electronic system and paddles or directly with a stick. Drivers can ‘flat shift’ if the gearbox is linked to the engine ECU, which kills torque for a split second to unload the gears so that ratios can be swapped in milliseconds.

Under the skin: How wheat can cut your car's CO2

Single speed "gearboxes" with fixed ratios are simpler, lighter and suitable for almost all EVs. The only compromise is that they may not be optimised for the autobahn.
Yet, even Rimac has switched to single speed for their next hypercar.
I would say that fixed ratio reduction gear do not fit the everyday definition of "gearbox".
So, no, gearboxes are not here to stay, in the electric future they will go the way of tire tubes and carburetors.
LP in Brighton 30 March 2020

Or is it (gearbox here top stay)?

There now seems to be several hybrids which now do not have a gearbox. These include the Mitsubishi Outlander and the latest Honda CR-V and Jazz models. Such models are series hybrids which, during the startup and acceleration phase, transmit power via generator and electric motor with no mechanical connection to the driving wheels. Once the car is up to speed the engine may be directly connected to wheels via a single speed reduction gear, which I'd suggest isn't really a gearbox at all.

The arrangement is simple and light though, because of the disconnect between engine revs and road speed (elastic band effect) when accelerating, it is sometimes wrongly described by journalists as a CVT.