BACK TO ALL NEWS
Currently reading: Under the skin: What we know about Aston's new twin-turbo V6
UP NEXT
2024 BMW X3 primed to take on Mercedes-Benz GLC

Aston Martin's TM01 is no revolution, but the devil is in the detail
Open gallery
Close

Aston Martin's new ‘hot vee’, dry-sump ‘TM01’ V6 engine, so named because the turbos lie in the vee of the engine, looks as exciting on paper as it probably will be in the flesh. Although Aston isn’t disclosing a huge amount of detail at this stage, the picture of it shown above reveals a lot.

Starting at the bottom, there’s that sump. ‘Dry’ sump is a bit of a contradiction in terms, because sumps on engines store oil and dry sumps are designed to do the opposite. Instead of a large, deep sump full of engine oil, the dry sump is reduced to a shallow pan and gives two advantages.

The main one is that oil is pumped around the engine from a separate tank, so there’s no chance of the oil pick-up collecting air instead of oil during hard cornering, braking and acceleration. The second is that a shallow pan in place of a deep sump means the engine can sit low in the chassis, lowering the car’s centre of gravity.

Bottom left looks like the dry sump pump. The difference between this and a standard oil pump is that it scavenges oil as well as pumping it, and it scavenges faster than it pumps, so the pan remains quite dry – hence the name. If it didn’t, the engine would drown in its own oil.

The Y-shaped casing on the front of the engine is likely to cover chains, rather than belts, taking drive from the crankshaft up to the four camshafts.

The pair of black circular covers at the top of each Y form part of the variable cam timing mechanism and give away the position of each camshaft. Above that are the air compressors of the twin BorgWarner turbos. On top of each one, a black electronic control unit opens and closes the turbo’s wastegate on the ‘hot side’ of the turbo, towards the rear of the engine, via a rod.

The two large ports at the top are the turbo air intakes and the lower pair are the exits for the pressurised air. Hoses will take the intake air from the lower two ports via intercoolers to the two throttle bodies on the front of each plenum chamber tucked under each cylinder bank. On this prototype, they’re made by the Italian firm Dellorto, which was famous for its carburettors back in the day.

The three black blocks on top of the right-hand side of the engine are coil packs, one for each spark plug. In this configuration at least, the TM01 appears to have both direct and port fuel injection – an idea pioneered by Toyota. To the right is a fuel rail (pipe) for delivering petrol to three port injectors, their black electrical connectors peeking out above the rail. Three more direct injector connectors are visible just below each coil pack for delivering atomised fuel directly into the combustion chamber.

The combination of the two gives more scope for blending the torque of the engine at different revs and loads with the hybrid electric drive, while minimising emissions. 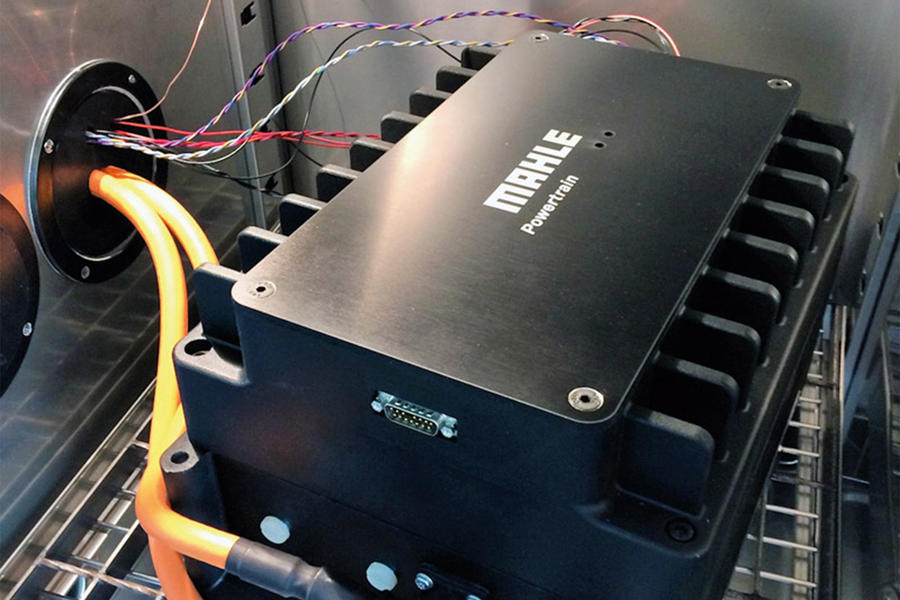 The testing of EV batteries and being able to simulate real-life drive cycles in the laboratory is an important part of improving the breed, and Mahle Powertrain has just opened a new facility to do exactly that. The firm is famous among other things for making components such as forged pistons for high-performance engines.