BACK TO ALL NEWS
Currently reading: New Suzuki compact SUV spotted testing ahead of year-end debut
UP NEXT
2021 BMW 2 Series Coupe: best look yet at RWD model

This is our first look at Suzuki's new B-segment SUV, which is due to go on sale in the UK and Europe in spring next year.

Priced to compete against the likes of the Nissan Juke and Renault Captur, the new Suzuki model will take much of its styling inspiration from the iV-4 concept, revealed at the Frankfurt motor show last summer.

Ushering in a new design direction for the brand, the iV-4 measured 4215mm long by 1850mm wide, with a height of 1665mm. Key elements from that car, including its signature five-bar grille, look set to be retained for the production model.

Appearing visually smaller than the recently-launched SX4 S-Cross, the new model is likely to share that car's engine line-up, as well as taking its AllGrip all-wheel drive system. That means a pair of 1.6-litre petrol and diesel powerplants, both with around 118bhp.

Likely to be heavily customisable by customers, the new car will help Suzuki to cash in on the fast-growing crossover market.

The new car looks set to be built at Suzuki's Hungary plant and forms part of the company's plans to add four new models to its range. As well as a new city car to replace both the Alto and the Splash, the firm is also looking at a more spacious supermini based on the G70 concept.

Suzuki will reveal the model at the Paris motor show in October. 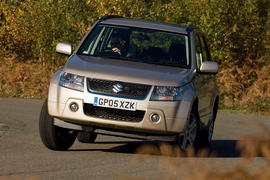 The Suzuki Grand Vitara used to put off-road ability before on-road manners, but does it now deliver?

Joy of joys, yet another

16 May 2014
Joy of joys, yet another compact/crossover SUV. Just what we need on the roads. Sigh.

16 May 2014
Height 1665mm. Thank you Suzuki for recognising that some of us like small crossovers and 4x4s because they offer a properly raised driving position (not that overall height is the ultimate measure here) making nightime, city and country driving much more pleasant and less stressful. Renault, Peugeot et al stop making crossovers that are barely taller than a regular small estate car and then cynically marketing them as offering a real alternative.