BACK TO ALL NEWS
Currently reading: Tesla ‘Plaid’ 3-motor system coming to Model S 'in 2020’
UP NEXT
Motoring heroes: the most inspiring people in the car industry

A series of tweets by Tesla CEO Elon Musk have confirmed that the Model S will adopt a new, ultra high-performance three-motor powertrain configuration coined ‘Plaid’.

In the tweets, Musk claims that the new powertrain is “about a year away” and will also feature in the X and Roadster models, but not the upcoming Model Y or recently released Model 3 saloon.

The Tesla boss also confirmed that the uprated powertrain will cost more than any of its current offerings, but will still cost “less than competitors”, perhaps hinting at the recently unveiled Porsche Taycan which costs £138,000 in flagship Turbo S form.

The news comes after a beefed-up Model S P100D+ featuring wider wheel arches, a rear spoiler and aggressive grille was spotted testing at the Nürburgring earlier this week, with the intention of beating the Taycan’s lap time of seven minutes and 42 seconds. 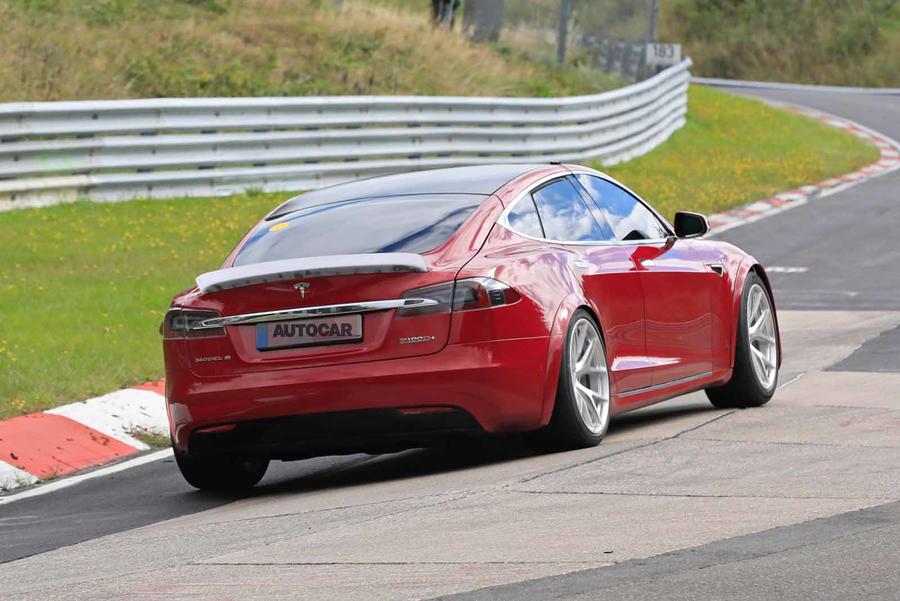 Though Musk originally tweeted that the EV would go for the laptime record this week, it is now understood that the German circuit has been able to offer him a 30-minute window in a couple of weeks due to their tightly packed schedule.

The Model S is already claimed to be a lap record holder at Laguna Seca Raceway, one of the most famous tracks in North America, and in order to tackle the 12.9 undulating miles of the Nürburgring, it appears that Tesla are seeking to recruit the talents of ex-Formula One champion Nico Rosberg, with the German claiming that he is “still in discussions” about piloting the upgraded Model S on its final run.

Also claimed by Musk is that the Model S currently being tested at the ‘Ring is equipped with seven seats. This is perhaps the first indication of how powerful Tesla are hoping the ‘Plaid’ powertrain will be, as two extra seats over the Model S’s standard five will result in considerable additional weight - but would allow them to loosely claim the "fastest seven-seater" lap record.

....they want to beat tesla so they make a modified version of the model S to try and beat it that is what i call cheating.

Doesn't even make sense in

Doesn't even make sense in what you have said.

Tesla is testing the new 3 motor system in this car which will ultimately go on sell above the refreshed raven model.

Which part of that is cheating?

What are you on?

Doesn't even make sense in what you have said.

Tesla is testing the new 3 motor system in this car which will ultimately go on sell above the refreshed raven model.

Which part of that is cheating?

What are you on?

well no but those wheels and that spoiler are on there for a reason and so the production one is not going to be as fast as the one tested here and just because tesla is the first to kick off electric cars doesnt mean they own it and have to be the best tesla just need to relax abit. dont think porsche will be too bothered by it and later they will just bring out a faster model of the taycan like a GT3 version and go along acting oblivous to tesla and just thrash them, and not use a stopwatch to time thier car around the 'ring'

Porsche just arrived and the mighty Tesla is already playing cacthup! So, FSD was just a matter of 6 months and is yet to materialize and now 12 months away are 2020? LMFAO! It is going to be a blessing if they manage to start selling something of this (carbon brakes, light forget wheels, 3 motor setup, new dashboard with HUD) by september 2020, and that means they are able to open the new factory in China and start to generate any profits from manufacturing, delivering and selling vehicles. Would like to know how the goodwill warranty to put back right any Model 3 costs them though. Might not be enough generated profits with the sale of any Model S and X to cover all this.

What an arse, dont you mean

What an arse, dont you mean its taken Porsche 7 years to catch up to Tesla, you crack  me up.

Do you really expect Tesla to stand still!

you got the maths wrong

Oi, it has taken more than 8 years for Tesla to come up with carbon rotors on the Model S40, so much so that now they will call it a Model S100+ just to please their usual chearleaders! But Trump knows how many years will they take in order to be able to add an active wing on the boot lid... Tesla playing catchup and Porsche just arrived, they have yet to show the Weissach pack and the Taycan GTS. Too much for your truck (next model from Tesla).

After beating the Taycan with

After beating the Taycan with a Model S , The Roadster will go on to beat even the fastest production supercars - Porsche or otherwise. Anything to upset the legacy carmakers with an EV is a good thing.

After beating the Taycan with a Model S , The Roadster will go on to beat even the fastest production supercars - Porsche or otherwise. Anything to upset the legacy carmakers with an EV is a good thing.

You really think a Tesla Roadster version 2 will be faster than an Aston Valkyrie around the ring if the Aston did a time?

It's not got enough downforce to get anywhere near the Aston.

It will be faster and at a

It will be faster and at a far cheaper price than those overhyped Aston things.

Badge snobbery at it's worse.

Mrs bucket is alive and well

Tesla Fanboys are the biggest bores..

It will be faster and at a far cheaper price than those overhyped Aston things.

Badge snobbery at it's worse.

Mrs bucket is alive and well

What you say makes no sense, they both rely on tyres and both need downforce on those tyres to get around corners.

The Valkrie will be faster, as the standard roadster doesn't have a mad aero pack.

Could Tesla make it be faster? Quite possibly, with the right additional aero.

But then all the mainstream carmakers are also making electric hypercars - so Tesla's unlikely to hold any records for long.