Skoda will introduce a rakish-roofed version of its new flagship EV, following the lead of VW's ID 4
Open gallery
Close

Skoda is planning a range of Enyaq iV electric models over the next few years as it looks to capitalise on the growing demand for EVs, and new spy shots show the sloping-roofed coupé version nearly undisguised.

The Enyaq, revealed earlier this year, is Skoda’s first bespoke EV and is based on the Volkswagen Group’s MEB electric modular platform.

Now Skoda’s sales and marketing boss, Alain Favey, has told Autocar that more variants are due. He said: “We think the Enyaq is the perfect right step, and there will be a range of Enyaqs that will be expanded over the years.”

Given the flexibility of the MEB platform, the cost-effectiveness of different bodystyles is easier to justify across all Volkswagen Group brands than for traditional cars.

The upcoming Volkswagen ID 4 will receive both regular SUV and coupé versions, and spy shots of a prototype have shown that Skoda will follow the same route with the Enyaq.

While it appears identical to the regular Enyaq from the front, things change from the B-pillar backwards, with a reduced glasshouse, a rising shoulder line and a roofline curving into a steeply raked rear screen and short, saloon-style tailgate. 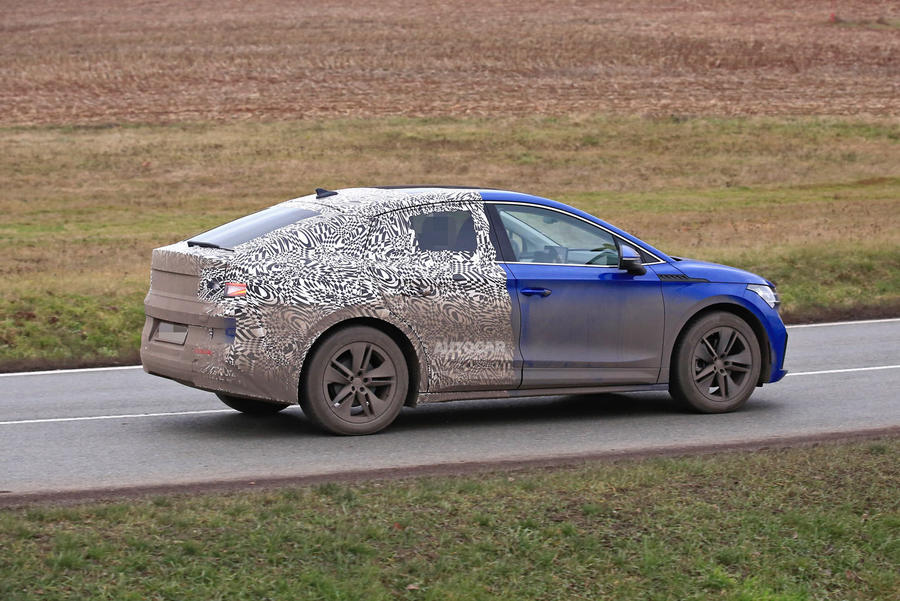 The Enyaq coupé, whose production name hasn't been confirmed, will use the same underpinnings as the regular Enyaq. That should mean a range of rear- and four-wheel drive powertrains, kicking off with a rear-driven 177bhp model with a 62kWh battery and rising to the vRS with 302bhp, four-wheel drive and an 82kWh battery.

It remains to be seen if the redesigned rear end has a positive impact on range; sister brand Audi’s E-tron Sportback achieves an extra 6.2 miles over the regular E-tron, thanks to a lower drag coefficient. It’s likely the Enyaq’s altered roofline will have a similar effect.

Every Enyaq can be charged at a rate of up to 50kW as standard, with 100kW charging optionally available for the 62kWh battery and 125kW charging offered at extra cost on the 82kWh model.

Don’t expect a radically altered interior, either, with the same digital instruments and infotainment display as the standard car. Whether or not the roofline will impact rear seat space remains to be seen, but it will almost certainly reduce the 585-litre boot capacity of the standard Enyaq.

As is customary with coupé-styled models, a small price increase is likely over the £30,450 (post-government grant) base price of the standard SUV. Expect the coupé to cost approximately £1000 more.

Skoda may also consider models tailored for specific countries, such as China, which is by far its biggest market.

Beyond the intention to grow the Enyaq line-up, Favey said Skoda has no solid plans for its next EV – but that the use of the MEB platform means it will be able to develop new electric cars quicker than traditional combustion-engined models.

Favey added: “It depends how quickly the EV market grows. The planning [for EVs] is less rigid than we might have in other segments – for example, [the replacement cycle for] the Octavia. We don’t know what demand will be in the EV market, but we think we’ve done our homework.”

He said that the advent of EVs to the Skoda range should allow the brand to grow its market share in western European markets in which its performance is weaker. Skoda’s biggest markets after China are Germany, the Czech Republic, Russia and Poland.

“I see EVs as big potential – and not in our typical markets,” said Favey. “In Norway, we have 6% market share, which is more than our European average in a country where everybody is buying an EV and we didn’t have one. Skoda in Norway is extremely excited to get the Enyaq. It gives us a lot of chance to conquer new markets.”

Who do you expect to buy the new Enyaq iV?

“I think more than half of customers will be new to Skoda. The Enyaq allows us to talk to different kinds of people. I think they will be younger [than our typical customers].”

You will soon have Octavia and Superb plug-in hybrids. How about smaller PHEVs?

“It’s a technology that’s still extremely expensive. You need to find a customer base that has the buying power to afford that technology or you lose money, which isn’t an option for us. We’re not interested in going into smaller segments with plugin hybrids knowing people don’t want to buy them.”

You recently confirmed the Citigo is no more. Does the Fabia still have a future?

“In countries such as Poland and the Czech Republic, where we’re extremely strong, there’s very strong demand for small affordable cars. And with the estate version of the Fabia, there is little competition. There’s huge demand for it in Germany and elsewhere. The cake is smaller but our share of the cake gets bigger.”

What are your thoughts about selling cars online?

“Covid has shown us how important it is to be able to sell cars online. The Skoda UK team is at the forefront of that, piloting online sales, and the launch of this will be rolled out first in the UK. We’ve accelerated our plans in this direction.”

It’s not a coupe though, is it

Please can you stop peddling the manufacturers cobblers PR spin for these variants.

If these were not SUV/Crossover things then we'd be calling the standard car an estate and this variant would be nothing more than a hatchback. After all, the roof height at the B post is often common between both standard car and hatch variant.

BTW this is another example of my long believed theory. The most practical version of any car cannot be cool or desirable - fact. S-max could only be desirable because Galaxy existed. Estates only really became desirable after MPVs appeared. So even if the less practical version is a munter (looking at you X6), some people will always find it a more desirable option.

Oh, and Skoda have lost the plot. This Enyaq is dull, yet fussily styled, whether you choose estate or hatchback imho.

I think the standard Enyaq is

I think the standard Enyaq is a pretty dumpy looking thing, so this is a slight improvement.

Its just more of the same though ..

And heavy with it, so not exactly a belle of the ball.

Then again, Skoda (like BMW and Audi) insists on making each new model a little uglier than the last.