BACK TO ALL NEWS
Currently reading: First drive: 2020 Skoda Vision iV prototype
UP NEXT
Ford backs call for European ban on new ICE cars from 2035

Electric SUV concept isn't far from production, and an early taster of what's to come proves there's plenty to like
Open gallery
Close

The automotive future will start next year, when the Volkswagen Group begins in earnest its plan to make the battery electric car a mainstream choice.

Not that it has much choice in the matter. After the battering from Dieselgate (which is still ongoing four years later), it, like all car makers selling into the European market, has to dramatically reduce the average CO2 output of its fleet of cars. What was a tricky task was made massively more difficult by the destruction of diesel's credibility as a fuel.

Volkswagen has the advantage of holding a number of automotive brands, which should allow it to shift more electric vehicles than rivals, even if that means differentiating between, say, a Volkswagen and a Skoda is more important than it’s ever been.

With that in mind, perhaps I shouldn’t have been surprised by my first view of Skoda’s first production model, the Vision iV, in the flesh - albeit in concept form. Despite being based on the same MEB electric ‘skateboard’ as the recently unveiled Volkswagen ID 3, it's a significantly different vehicle. 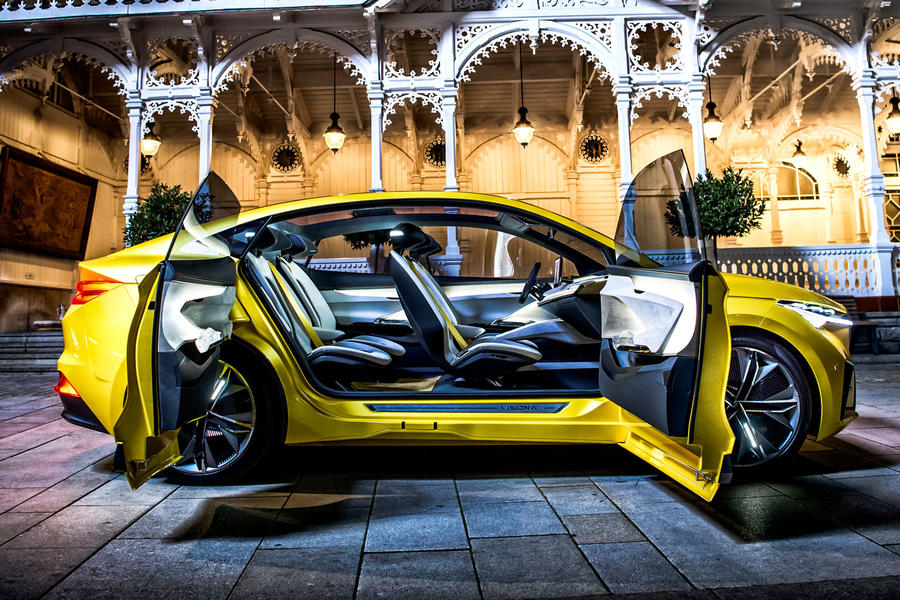 It’s especially odd to view something so self-consciously futuristic at night in front of an elaborately decorated Victorian entrance to a natural hot water spa. But the location in this noted Czech town is a perfect foil for the Vision iV, which Skoda described as being '90%-plus’ the final production car.

Skoda might not welcome the comparison, but this car has the look of the Tesla Model X. It’s rather taller than its ID 3 stablemate, and it's distinguished by a deep and substantial nose and hooped roofline. Skoda describes it as a ‘four-door crossover coupé’, and it might be that the aerodynamic demands of EVs mean this is as tall as an electrically powered SUV can be. Company insiders say that exterior features such as the continuous light bar running across the nose should make it into the car that will go on sale late next year.

The driving position is raised but not as high as that of the Skoda Kodiaq. It’s a reminder of how comfortable this half-way position is and how easy it is to slide in and out of the car. 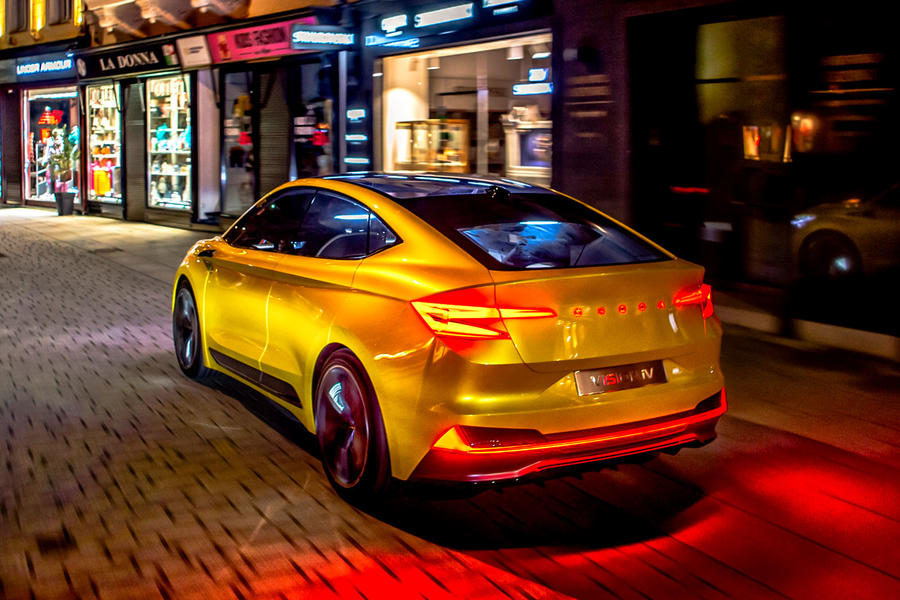 There’s not too much that can be deduced from our short, low-speed steering through this elegant town, aside from the reminder that electric vehicles are a short-circuit to luxury travel. The silence, smoothness and seamless shove are, arguably, the biggest argument for electric vehicles, rather than dry calculations about mine-to-wheel CO2 emissions. And this concept is proposed as all-wheel-drive with a 0-62mph time of less than 6.0sec, which is a ballpark figure tipped for production.

It’s to be hoped that Skoda has really pushed the boat out - as it has in this concept - with the interior design and the possibilities opened up by ambient lighting design. Riding inside the Vision iV feels seriously fresh and different. Will people switch from, say, the Kodiaq (which is doing very well) for a less rugged but more refined and luxurious crossover alternative?

A big dose of bravery for the production Vision iV should give it a fighting chance.

Bring back some of the Yeti spirit with some panache. I am bored silly by your current dull designs.

Hopefully, this device stays true to the concept ­— I’m optimistic because of the allegedly wider freedom the MEB platform allows the underlying architecture. There’s a nice comment here that it’s a shortcut to premium luxury and I rather like that. This car looks upmarket – maybe more so than Tesla.

The silence of a five-year-old car that cost £40k when new may be shattered by the creaks and groan of aged plastic trim more than a rattly engine but it’s still going to feel different. There’s an appeal in the used market that, battery durability aside, a used car buyer might rather like – Rolls-Royce silence in commuter traffic has its appeal. Especially when EVs in this class seem to have a visual classlessness.

The production car will look

The production car will look nothing like this. It will be toned down and made to be a bit duller than the ID
View all comments (5)