Seat has added an automatic, front-wheel-drive variant to its Tarraco line-up for the first time, intended to make the large SUV more appealing to company car buyers and expected to account for one in four Tarraco sales.

It has previously only been available in front-wheel drive mated to a six-speed manual gearbox or in an all-wheel-drive configuration paired with a seven-speed DSG automatic transmission.

The 148bhp 1.5-litre model with front-wheel drive and an automatic ’box is the most efficient and tax-friendly Tarraco in the range. As a result, the variant will increase “the Tarraco’s appeal to fleets and customers where 4Drive all-wheel-drive technology isn’t as critical”, said Seat. CO2 emissions based on WLTP testing start from 164g/km while fuel consumption is a claimed 35.3mpg.

The variant, which is priced from £29,900, will be offered in four trim levels: SE, SE Tech, Xcellence and Xcellence Lux.

There are no plans to add any other powertrain or gearbox variants. A Seat spokesman said: “We’re confident that the engine and gearbox line-up meets the demands of the UK buyer base.”

A plug-in hybrid version of the Tarraco will arrive within the next two years. That model will offer 207bhp and 295lb ft of torque, with an electric-only range of 31 miles and a CO2 output of less than 50g/km.

The Tarraco is the third SUV launched in recent years by Seat, following the Ateca and Arona. The seven-seater is built on the same MQB-A long-wheelbase platform as the Volkswagen Tiguan and the Skoda Kodiaq. 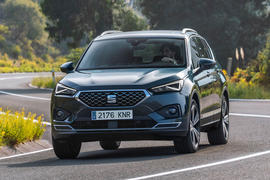 CO2 emissions based on WLTP testing start from 164g/km while fuel consumption is a claimed 35.3mpg.

That's weird because Skoda have been offering it's cousin the Kodiaq with a fwd 1.5tsi DSG in SE/SE-L/Edition trim for sometime and the emissions are 133/136/136 respectfully. ( not to mention a higher fuel consumption figure ). And it's a similar story with the Tiguan Allspace.

Either those figures AUTOCAR has published are wrong or SEAT have got it wrong if they want to attract company car buyers away from VW / Skoda.

I imagine the models that are

I imagine the models that are already available for registration are quoting the "NEDC-derived" numbers that are reverse-engineered from the WLTP test. Whereas the new Tarraco version will be quoting the proper WLTP values that everyone has to quote from next year.

No wonder our emissions are going up. I'd just ban SUVs as company cars. Electric ones are far less efficient too.