BACK TO ALL NEWS
Currently reading: Renault in talks with Nissan to build two new SUVs at Sunderland
UP NEXT
2020 Skoda Enyaq: exterior previewed in official images

Nissan is in talks with alliance partner Renault to build two of the French brand’s SUV models at its Sunderland plant, the Financial Times is reporting.

The Kadjar and Captur SUVs, which share their platforms with Nissan’s Qashqai and Juke respectively, are currently built in Spain. However, the two brands are looking to consolidate production, as well as boost the fortunes of Sunderland, Nissan’s flagship international factory. The FT cites two people familiar with the discussions.

A major reshuffle is expected to result in Nissan cutting its overall production capacity by 20% in 2023, closing the firm’s Barcelona plant, which makes commercial vehicles for export. That plant had been running at just 30% capacity, reports suggest.

A decision to move production of two of Renault’s most popular models to the UK would likely secure thousands of jobs at Sunderland. The plant’s future had been in doubt following Britain’s decision to leave the EU, with Nissan warning that tariffs on exports into the EU would put it in jeopardy.

The move would also point to a reunification between Nissan and Renault, a relationship that looked strained after the arrest and subsequent escape of former alliance boss Carlos Ghosn.

Ghosn was instrumental in forming the alliance between the French and Japanese makers, which was at one time the world’s largest car-making group. Since then, in-fighting is said to have caused a rift between senior executives.

The full strategy of restructuring Nissan’s European business will be outlined by new Nissan CEO Makoto Uchida on 28 May. The brand has struggled in the region, with problems being greatly compounded by the coronavirus crisis. 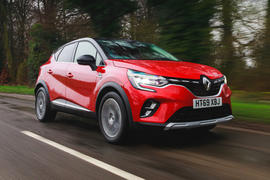 Would be a change from everything being made elsewhere, cheaper, why is it so expensive for manufacturing in this country?

why is it so expensive for manufacturing in this country?

Because we re a first world country and wages are higher, plus the car industry is an expensive industry to be in so manufacturers miove production to where its cheaper. Thoguht it was obvious.

Brexshit has barely even started, plus we ve got to deal with the COVID 19 fallout (and we re clearly going to have a second wave) so it proably wont happen, as once the lying c**** we call a prime minister and the load of incompetent, xenophic tw*ts hes got in his government (I use that word in its loosest possible terms) get to sorting the Brexshit terms out proper no one will want to come near us.

What an aggressive and vile

14 May 2020
What an aggressive and vile reply to a simple question. I'm not going to discuss politics on this forum but if Brexit is the industry killer so proposed, then why is Renault even thinking of using Sunderland? And your answer doesn't explain Sunderland or derby or other manufacturing plants in the UK. But I do agree we are probably more expensive.

Expect nothing else from the hater that is Typos

Blame it on Brexit?

Come on all you anti Brexit tossers that frequent this forum. What say you about this! Don't be shy now.

Come on all you anti Brexit tossers that frequent this forum. What say you about this! Don't be shy now.

It's pointless having this discussion with you because you are too ignorant to understand the issues involved. Remember that Nissan got an audience and agreement from the PM last time this issue came up.

Bravo to you scrap, you were the only one to step out from the shadows! I doubt not we both want what is best for the United Kingdom, albeit we come from different sides. Unfortunately neither side will be able to claim victory given the impossibility of eliminating in their entirety the effects both known and unknown of the COVID-19 pandemic and the effects or otherwise, posiive or negative on the overall economic position in the United Kingdom post Brexit. I guess that means you got a 'Get out of Jail' card for free to use a Monopoly euphemism!

..... the (class-leading) Captur production will shift to the UK.

Other than that, we're debating a rumor. Next month both Nissan and Renault will OFFICIALLY outline how the combo will save a combined $5 bn.

Also rumored: the discontinuation of the (fantastic) Scenic), (brilliant) Espace and (superb) Talisman. Replaced by two versions of the Morphoz SUV concept. Real lookers, as per Laurens vd Acker.