BACK TO ALL NEWS
Currently reading: Toyota Yaris Hybrid-R gets Frankfurt debut
UP NEXT
New Hyundai Bayon to launch in 2021 as entry-level crossover

The car is powered by a combination of a 1.6-litre four-cylinder direct injection combustion engine and two electric motors attached to each of the rear wheels - effectively giving the Hybrid-R electric all-wheel drive. Combined, the power output of the Hybrid-R is 414bhp.

A super-capacitor, originally developed for use on Toyota's TS030 Hybrid Le Mans car, is used to store energy. Toyota says the super-capacitor can store power at a higher density and faster than the metal-hydride battery used in the standard Yaris hybrid.

A third 60bhp electric motor is also used as a generator to feed power to the super-capacitor and also to manage power delivery to the electric motors on each wheel; effectively working as an electric traction control system.

Torque distribution between the two rear wheels is also electronically altered depending on load to improve cornering.

Toyota hasn't ruled out using the Yaris Hybrid-R in motorsport, saying that its configuration makes it suitable for use 'in a number of different racing categories.' 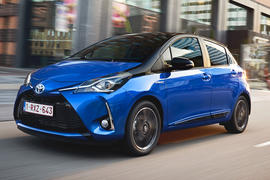 And, how much does it weigh?

And, how much does it weigh?