BACK TO ALL NEWS
Currently reading: New BMW i5: all-electric 5 Series gives clues to new look
UP NEXT
Agents of change: how car buying is changing

The current BMW 5 Series is scheduled to be replaced in 2024, seven years after its launch, and our spy photographers have caught the all-electric version testing on public roads.

Following the imminent arrival of the iX flagship SUV and i4 saloon, BMW will launch a further seven electric cars by 2025, with several core ICE models gaining EV derivatives in the same vein as the X3-based iX3. Prior to these images of the new 'i5', we've seen battery-powered prototypes of the next-generation 7 Series, the current 3 Series and the next-generation X1 crossover.

BMW has yet to specifically detail how it will vary its EV powertrain offering, but the current 5 Series uses the same CLAR architecture that underpins the ICE and EV versions of the new 4 Series, suggesting that its larger sibling will offer a similar powertrain line-up if it retains the platform. 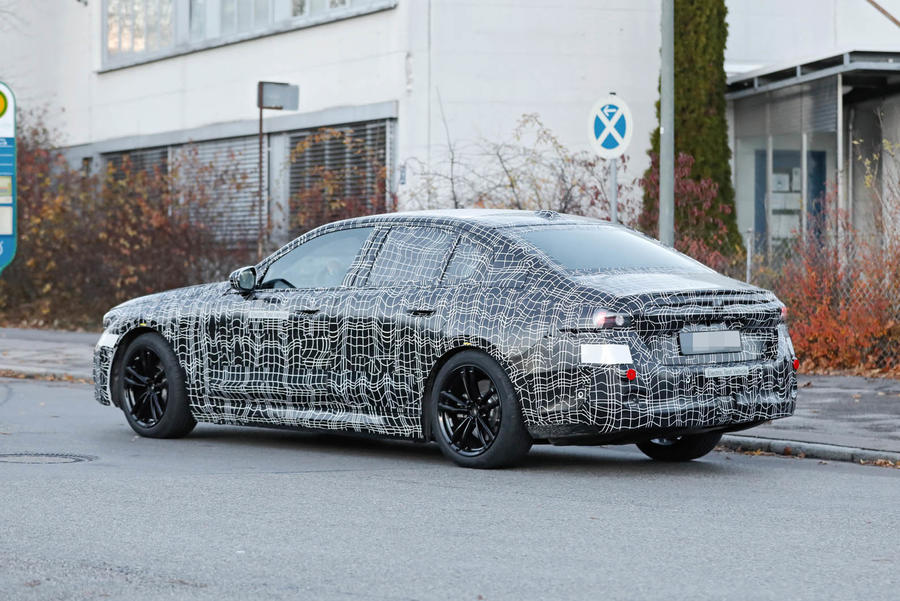 That means the standard version of the i5 could potentially be offered with both rear-wheel-drive and four-wheel-drive powertrains, with output ranging from 335bhp in the i5 eDrive40 up to 536bhp in the performance-oriented i5 M50 xDrive (if it follows the model-naming strategy of the i4).

The plug-in hybrid versions of the new 5 Series will likely retain their current 530e and 545e badging, with electrified four-cylinder and six-cylinder petrol engines respectively.

A range of ICE-only variants is likely to continue on sale, at least initially, although it remains to be seen whether BMW will reintroduce the 523bhp V8-powered M550i range-topper, and the full-fat M5 will almost certainly adopt some form of electrification.

Our first clear look at the new 5 Series reveals how radically it will be visually distinguished from the current car. Notably, the controversial 'vertical' grilles from the 4 Series and the new M3 are absent, with the new 5 Series instead adopting what looks like a more familiar horizontal arrangement, which will be blanked-off for the EV.

The front end itself is a much sharper arrangement, with the grilles angled backwards to give the bonnet a small degree of overhang, while the rear end looks to move away from the conventional three-box saloon shape for a fastback-style silhouette - although variations in the shape of these prototypes suggest that the EV and ICE models will be slightly different shapes.

I like the current 5er a lot, especially the facelift light treatment. Given their track record this one will be an absolute munter, though. I hope I'm wrong.

It's one of the best proportioned Car on the just now,and there seems to be a lot of BMW's on the road at the moment, either BMW has got it right, or?

It's very disappointing that BMw haven't launched a new dedicated chassis, for it's range of pure EV's, and the styling direction at present is not good enough either. You used to look twice at the neat styling of say an E46 or first X5. With designs from 2019 onwards, you would rather look away.The CLAAR platform is good for ICE vehicles, in terms of handling and ride. However, when stuffed with batteries, there are serious consequences for weight distriburion, passenger accomodation and boot space, which is poor in the i4 for instance.

Also, the failure to fit front pneumatic suspension, if that is the way they want to go at the rear, is another glaring compromise. They really need to step up their game if they are to compete with the likes of VW group EV's or Tesla. Relying on just decent straight line acceleration and range, isn't enough for the 'ultimate driving machine'.

D Grant 13 November 2021
Agreed, a car designed for both an ICE and electric engine is unlikely to excel.
View all comments (14)