BMW has detailed its new 545e plug-in hybrid as well as plans for its future powertrain strategy and new features such as ‘eDrive zones’.

The new model, set to be added to the UK range in the coming months after the rest of the facelifted 5 Series range, borrows its powertrain from the larger 745e and X5 xDrive45e. That means a 3.0-litre straight-six petrol engine mated to a 108bhp electric motor for a combined system output of 389bhp and 443lb ft.

That makes it BMW's fastest plug-in hybrid, with the i8 sports car now out of production. The 545e can do 0-62mph in 4.7sec and hits a limited top speed of 155mph. Its 12kWh battery allows a quoted electric range of between 28-33 miles depending on spec. Further details including pricing are yet to be released. Also now available is a Touring version of the 530e.

Alongside this, the brand has confirmed significant changes to its original 2013 electrification plan thanks to “learnings over seven years and 74 markets”, according to BMW Group corporate affairs boss Wieland Bruch.

The first core point is that BMW will continue to develop a further range of petrol and diesel engines, unlike a number of brands who have either ditched diesel altogether or plan to pivot fully to EVs. The German maker claims it will equip every petrol and diesel car it makes with a 48v mild hybrid system within the next two years. These will continue to play a core role in the brand’s future as full EVs, the firm claims, are still a long way from becoming a mainstream choice for buyers. 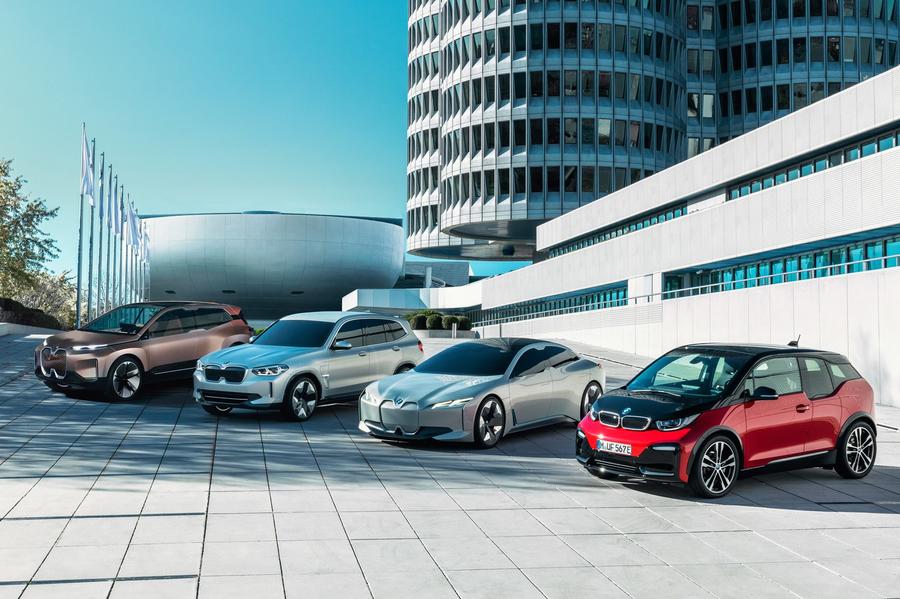 The company is “not in favour of” so-called ‘self-charging’ hybrids, he claims, saying if you can bring full hybrid technology into a car then it should “take full advantage of it” with a plug-in system. It is targeting a minimum of at least 50 miles of all-electric range for all future PHEVs.

The brand predicts that, by 2021, one quarter of its sales will be PHEV and EV, up to one third by 2025 and one half by 2030. Its first hydrogen model will be a large SUV using a 369bhp powertrain revealed earlier this year, while Bruch predicts a “a larger scale rollout” of fuel cell models by 2025.

New features are being added to BMW’s PHEV models, including the new ‘eDrive Zones’. Launching first in in the UK in London and Birmingham, they will roll out to future cities, and allow the cars to automatically switch to fully electric mode when entering city limits. Another new feature (not yet available in the UK) is eDrive Points - a system which allows drivers to collect virtual points for each electrically driven mile that can be redeemed for “attractive rewards”.

BMW has also detailed a wider sustainability programme to boost the environmental credentials of its electrified models. The firm’s Gen5 EV powertrain, debuting in next year’s iX3, will entirely abandon the use of rare earth metals. Minerals such as cobalt, needed for lithium-ion battery production, will be sourced sustainably from countries such as Morocco and Australia.

The current range of batteries is designed to meet a lifetime requirement equivalent to combustion models (10 years). Once deemed unfit for use in the cars, they could be used for another 8-10 years in “stationary purposes” as power sources.

After that 20-year period, BMW claims it will be able to reclaim over 90% of raw materials from the battery in the recycling process. As a result, it says, even a plug-in hybrid such as the X1 PHEV provides a 30% reduction in total lifecycle CO2 emissions compared to an equivalent diesel.

This car and the ones that will follow will be full EV (plug-in, charge up) because this combination seems pointless to me.

Attractive car, but why won't BMW make a touring version of their PHEVs?
You have to buy an X5 if you want this engine, and some space for a family.
Also, Autocar has misquoted the combined BHP figure, I think it's 389, not 289.
Jonny North 7 August 2020

Pretty sure there is (or soon will be) a touring version of the 330e (smaller engine than the 545e admitedly) - I got the saloon in Jan as my company car needed replacing, but if i was 9 to 12 months later I would have hung on for the touring version as far more practical (boot in the saloon is seriously hampered by the battery as you've no doubt heard).  Unless BMWs plan has changed?

Battery lifetime remains an issue. Many cars have a useful life of much longer than 10 years. If future cars are scrapped at that age, because it's not economic to replace the battery pack, the potential increase in resources consumed will be enormous.