From £62,9608
BMW's heavily revised flagship makes its debut in plug-in hybrid guise, with a focus on fusing luxury and performance
Open gallery
Close

BMW might not want to admit it, but the invoice for facelifting the current 7 Series came in a fifth dearer than what’s typically permitted.

That only confirms what we already know: the G12-generation model introduced in 2015 had fallen too far off the pace of rivals from Mercedes-Benz and Audi. Rolling refinement and a forgettable aesthetic were to blame, with the former undermining sales in Europe and the latter failing to fully inspire wealthy Chinese wanting to make a statement. Much money has been duly spent.

This refreshed 7 Series LCI (for ‘Life Cycle Impulse’) spearheads chairman Harald Krüger’s goal of making BMW’s costlier models more luxurious in the traditional sense. It’s why you can now have parquet leather on the seats and armrests and wooden inlays on the seatbelt outlet covers, and why there's additional sound insulation within the rear wheel arches, rear backrest and B-pillars.

Thicker glass, laminated to 5.1mm, is also available not only for the windscreen but also the side and rear windows, which are now more slickly lowered by new electric motors.

‘Luxury’ is also behind the ballooned kidney grille. Comparisons with Dr Lecter beckon, and BMW has surely gone too far this time, but along with the slimmer laser headlights and elegant panels of the lower front bumper, it does give the 7 Series a more imperious disposition.

The designers say their aim was to channel a touch of Rolls-Royce, itself owned by BMW, and when you see the car’s thrusting, bevelled nose and neat front bumper in the metal, you’ll know what they mean.

An extensive range of turbocharged petrol and diesel engine remains, starting with the 262bhp 730d diesel and culminating in the V12 M760Li xDrive – a leather-lined, 577bhp petrol-powered missile that'll do 190mph.

We’ll get to sample some of those models in March, before deliveries commence in April, but our first brief, pre-production taste of the new 7 Series comes in plug-in hybrid 745e form at BMW’s Maisach facility just outside Munich – a former German Air Force base that's now used as an academy to train employees. 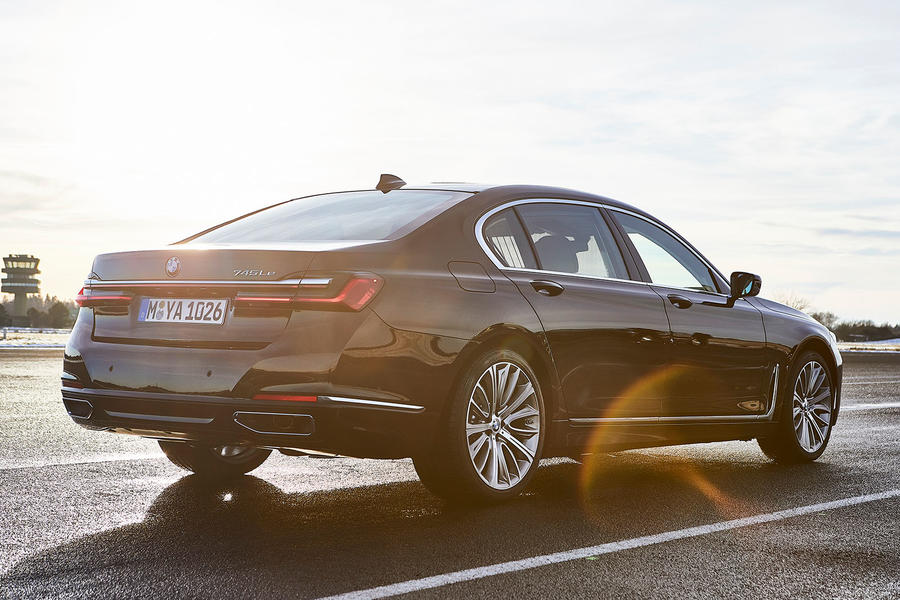 This car is a very rare case of upsizing, because while its 740e predecessor paired an electric motor with four petrol-fed cylinders, for the 745e that has grown to a more sonorous six.

In addition, the lithium ion battery pack stored beneath the rear seats may physically be no larger than before (you still lose just under 100 litres of luggage sapce), but its energy capacity is now 12kWh, resulting in a claimed electric-only range of 36 miles.

At 48g/km, CO2 emissions continue to sneak under the critical 50g/km regulatory threshold, which is some achievement given that with WLTP rules now in force, plug-in hybrids are tested with a full battery, an empty battery and at various states in between.

We’re driving a development car – not that you’d know it, because this lightly revised interior is vault-like in its fit and finish. The architecture is unchanged, but there are now more lavish finishes for the switchgear and the purely digital instrument binnacle is now the same one found in the new 8 Series, 3 Series and BMW X5, albeit with a plethora of readouts pertaining the to the hybrid powertrain. It's also gloriously comfortable in here.

There’s a choice of new driving modes, book-ended by the option of ‘locking’ the powertrain into electric mode, with a top speed of 87mph, and Battery Control mode, whereby energy is siphoned from the 3.0-litre engine and channelled through the gearbox-integrated electric motor to charge the battery.

Most of these cars will live their lives in the default Hybrid setting, however. The 745e’s ability to set off in silence then awaken – with barely a ripple in momentum – a smooth-spinning straight-six seemingly located in a different postcode is profoundly impressive. With 196lb ft of torque from the electric motor, throttle response is crisp at low speeds, but a brief stint in Sport mode on the autobahn highlights the true potency of this powertrain; 443lb ft from 1500rpm and 389bhp demonstrate why a 1995kg limousine still needs at least a half-dozen cylinders. Given the space, it will sail into triple figures without hesitation, thrumming sweetly all the way.

While both cars ride beautifully on adaptive air suspension, we'd wager the Mercedes S560e still better isolates passengers and breathes more instinctively with the road. Admittedly, the distant pitter-patter underfoot in the 745e could be more to do with the winter tyres than spring rates increased to handle an additional 200kg of hybrid hardware. What’s more, you’d now require one of our road-testing microphones to make a noise comparison with the Mercedes, and, in general terms, BMW seems to have closed the gap.

Criticisms? BMW has calibrated more regenerative travel into the brake pedal, which as a result feels a touch over-servoed and has oddly cushioned initial travel. The 745e is also a touch keen to stabilise any roll. Fine handling is ingrained in the brand’s DNA, and more recent 7 Series iterations have always suffered a little for that, because, unlike the Mercedes-Benz S-Class, they can’t simply discard all sporting pretence in the pursuit of luxury.

One special facet of the plug-in hybrid 7 Series we don't get to try is the intelligent powertrain management. BMW knows that if the driving experience is too complex, it will turn customers off the idea of buying a 745e instead of a 730d. A new program, known as Anticipatory Hybrid Drive, has therefore been designed to put the car’s versatile powertrain to best use without the need for the driver to switch out of the default Hybrid mode. If you have the sat-nav running, BMW claims the powertrain will if necessary charge the battery then automatically switch into electric mode at the ‘precise’ city limit or when the car finds itself in a traffic jam.

A development of this software will be tested on the 330e before finding its way onto the flagship 7 Series. Adaptive Recuperation uses sat-nav data and the car’s forward sensors to determine whether a lift of the throttle should result in the car coasting or applying the regenerative brakes. 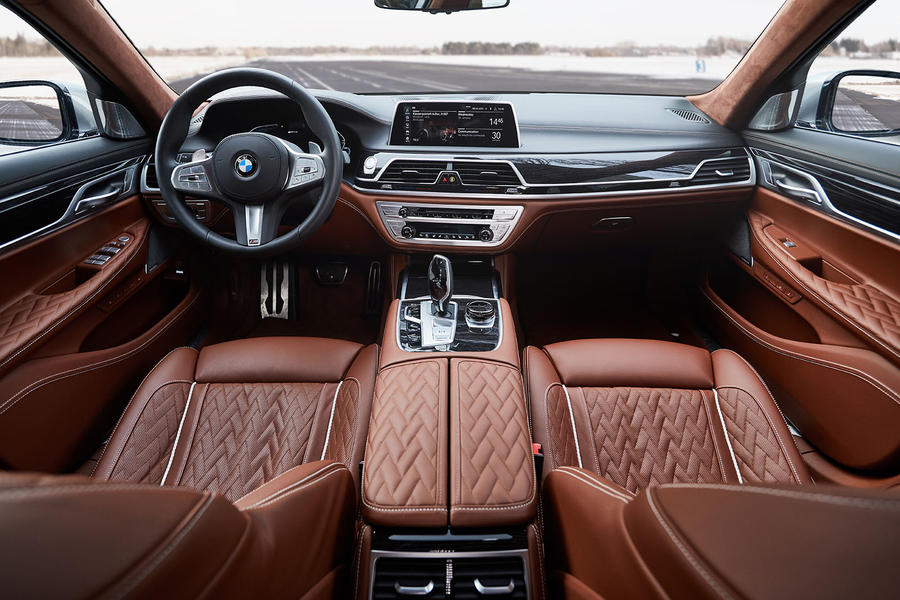 A more thorough dynamic assessment for BMW's new flagship than is possible in only 45 minutes of driving will come. As for this particular model, a plug-in hybrid 7 Series might be a concept whose broader appeal still needs to ripen, but that time would seem to be drawing near.

At this stage, the powertrain integration is all but seamless, and while the electric range remains marginal, it's used to increasingly clever effect. More importantly, with a six-cylinder soundtrack and performance to match, the most economical 7 Series no longer feels a poor relation to its range-mates.

In fact, in terms of outright luxury, the 745e is probably the most convincing car BMW has ever made. 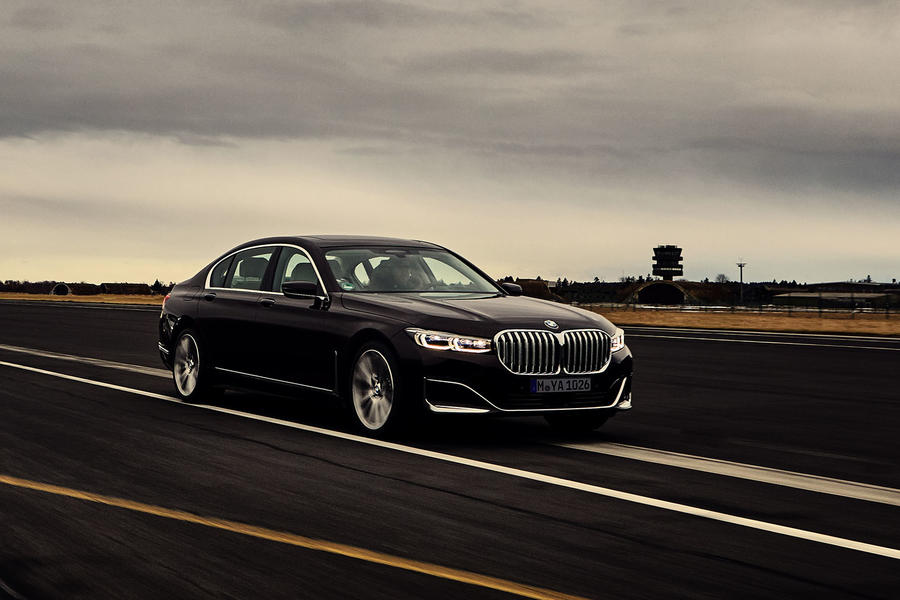 Great car even after many years since it's been released!

That new nose may be a grower. It doesn't immediately look wrong to my eyes in the way the Bangled 7 did.
And it doesn't look as bad as the big grill Audi introduced on the A8 a while back or the current LS grill. The A8 now has arguably the best nose but it's interface is just stupid. BMW has by far the best interface with it's multiple options.
The Mercedes just looks a bit too bland and anonymous as did the old 7.
This one has more presence and is now more easily differentiated from a 5.
And the next XJ? I wouldn't hold my breath. The new model was original due this year and Autocar devoted far too many issues rehashing essentially the same info again and again last year without telling us anything new. With Jags troubles who knows when it'll actually arrive.
Can't afford any of these but if I could my money would be on the 7. Make mine an Alpina.
superstevie 3 February 2019

Seem to be in the minority

Seem to be in the minority here, but I like the new grill.