BMW will follow up the latest 3 Series with the launch of the 4 Series range later this year, and the first prototype images of the cabriolet variant have emerged.

The shots of the drop-top 4 Series, showing it lapping the Nürburgring at speed, officially reveal that it will no longer adopt the folding hard-top roof layout of the current car, which will soon be phased out from BMW’s range.

With the current 2 Series and new 8 Series Convertible adopting a cloth roof system, it’s not a huge surprise that BMW has elected to drop the folding metal roof for the second generation of the 4 Series. The decision also brings it in line with its closest rivals: the Audi A5 and Mercedes C-Class Cabriolets.

Doing so reduces the complexity of engineering and producing an intricate folding hard-top system, and is likely to improve the long-term reliability that complicated folding hard-tops are often criticised for. 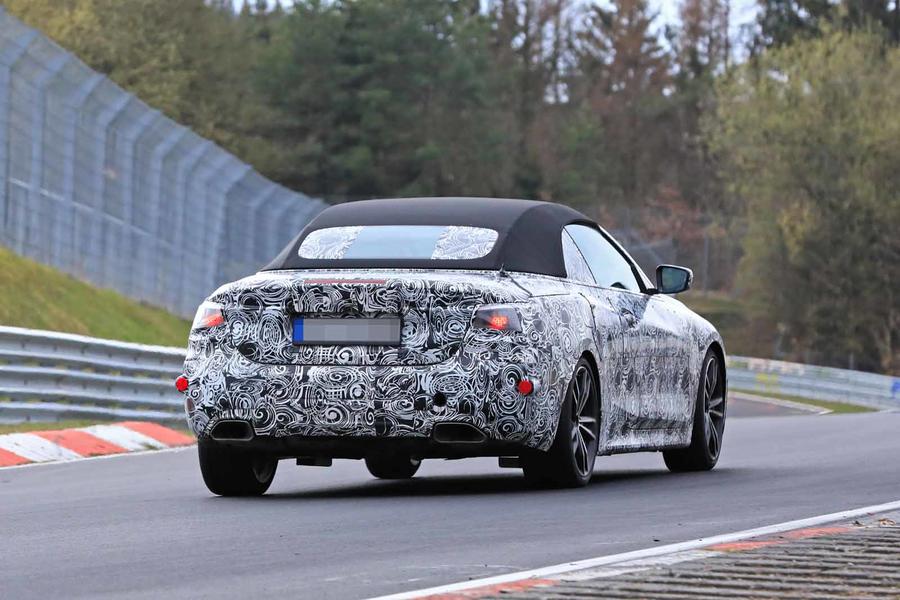 It will also reduce the car’s kerb weight, aiding handling, performance and fuel efficiency - expect it to be less than 100kg heavier than the coupé. With less mass to store underneath the bootlid when the roof is down, improvements in rear seat and luggage room are likely, too.

Like the 3 Series on which it’s based, the 4 Series range will be larger, stronger and safer, but also lighter thanks to the adoption of the firm’s aluminium-intensive CLAR platform architecture. The 4 Series will, as before, feature a wider track and lower, wider body than the 3 Series, aimed at giving the desired sportier stance but also at improving body control.

Expect a broadly similar engine range, beginning with four-cylinder turbocharged petrol and diesel engine options covering the lower- to mid-section of the range, and topping out with straight-six petrol and diesels on the 440i and 435d variants.

A new M4 Convertible is also expected, thanks to the relative success of the outgoing model despite its 230kg weight deficit over the coupé. That will use a newly developed 3.0-litre ‘S58’ motor producing upwards of 500bhp.

As before, we'll see a four-door Gran Coupé version of the hard-top 4 Series, while as part of BMW's ongoing electrification ramp-up, an all-electric version of the Gran Coupé, called the i4, will also arrive in 2020.

Yes, it’s a neat tidy fit, I’m just not sure the rear window is the final design, it’s an odd shape....