BACK TO ALL NEWS
Currently reading: New 2022 Dacia Jogger is UK's cheapest seven-seater at £14,995
UP NEXT
Renault Zoe given zero stars in Euro NCAP safety tests

Dacia has opened pre-orders for its new Jogger, which with a starting price of £14,995 becomes the cheapest seven-seater on sale in the UK.

It will be offered from launch in a choice of three trims – Essential, Comfort and Extreme – with air conditioning, cruise control and rear parking sensors equipped as standard across the range. Dacia highlights that, "in the interests of keeping things simple", just two options will be offered on top of that: metallic paint and a spare wheel. First deliveries are expected in the first half of 2022.

Following on from the launch of the new Sandero and inspired by the Bigster SUV concept, the Jogger is based around the same CMF-B platform as its supermini sibling but with a wheelbase stretched by 300mm to accommodate the additional rear seats. Crucially, it will eventually be available as a hybrid – a first for Dacia.

Despite the SUV looks, modular roofbars and scuffplates, the Jogger will be available with only front-wheel drive, as the Duster SUV will remain “as the true off-roader”. 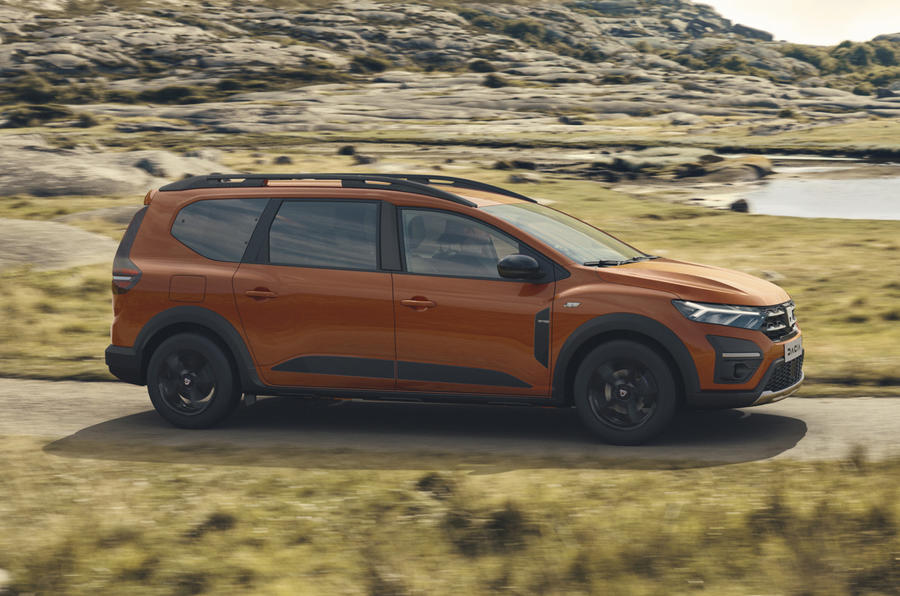 Designed to replace the Dokker, Lodgy and Logan MCV models, the Jogger has three rows of flexible seats, with the middle row rolling forward and splitting 60:40.

The boot volume is 160 litres with the rear seats in place (enough for a small shopping trip), rising to 708 litres if the rear-most seats are removed in their entirety.

None fold flat into the floor or slide back and forth, Dacia reasoning that these engineering alterations make the seats more expensive and take up more room.

Three systems are offered for the multimedia interface: Media Control, which comprises a smartphone cradle and docking station; Media Display, which adds four speakers and an 8.0in touchscreen; and Media Nav, which brings wireless Android Auto and Apple CarPlay, sat-nav and six speakers. 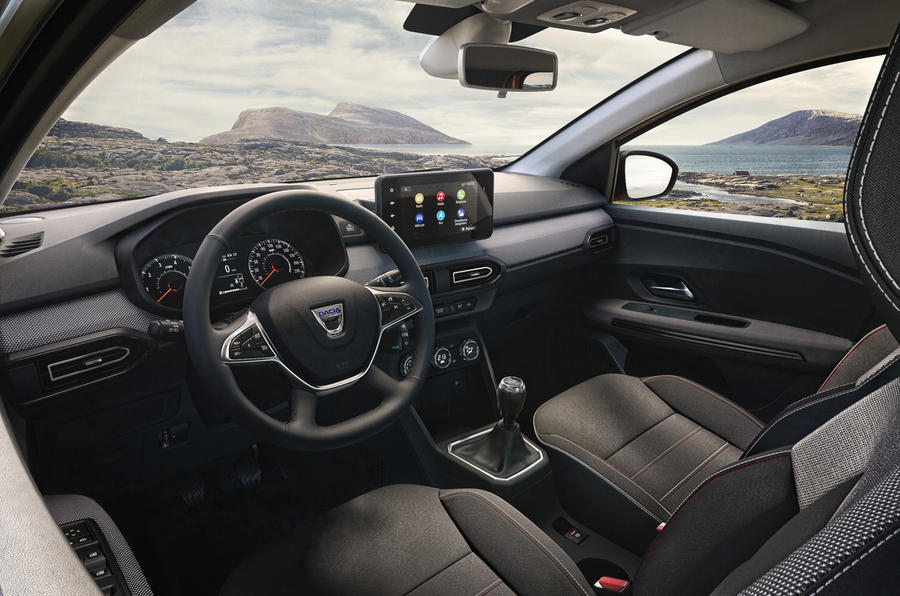 Thanks to a flexible platform borrowed from parent firm Renault (which uses it for the Clio and Captur), the Jogger will offer three engines.

First to arrive is a 1.0-litre turbo triple that produces 108bhp and up to 90% of its maximum 148lb ft from 1700rpm. This will also drop into the Renault Mégane in time and is likely to make up the majority of Jogger sales.

A 99bhp LPG Joger will also be offered after launch, using the same Bi-Fuel engine that appears in the Sandero. Neither 0-62mph times nor fuel economy figures have been released yet.

The hybrid, due in 2023, combines a 1.6-litre petrol engine, two electric motors (one an e-motor and the other a beefed-up alternator) and a multi-mode automatic gearbox, plus a 1.2kWh battery to make electric-only running possible for short distances.

There are no plans for a plug-in hybrid at this stage, although the flexibility of the platform means that one could be offered in the future. According to David Durrand, Dacia’s design director: “We can take this existing technology and adapt it very quickly because the platform is the same. We would need less than one year to change it.”

What's your favourite part of the Jogger?"The way that we matched the front of the Sandero with the rear cabin of the Jogger. The Jogger is a bit wider and taller, which was a challenge on the design side, because we needed to continue the lines running to the rear. We had this idea of the two boxes and creating this step between the front door and the second part of the car.

"I also like the way the rear lights have been finished, where we wanted to avoid a utility vehicle but still maintain the wide opening. If you push everything to make the space inside, the risk could be to have an ugly car on the outside. We tried to make it strong but not utilitarian."

Where did you have the biggest argument with engineering?

"In this type of car, seven-seaters, the third-row head room is the biggest compromise. Engineers would like a very horizontal roof with a very upright rear, but the car could look strange at the end. In our case, we managed to keep a little angle on the rear window on the tailgate, with the roof going down slightly to meet it. It was also good having an SUV-style car, with the roofbars, because the boxy shape is more acceptable than on other types, like estates."

Is that part of the reason for the additional ground clearance, to make it more like an SUV despite being two-wheel drive?"It was important for the design because the car is very long. We want to avoid an extruded car or to have too long a car, so by raising it and adding the roofbars, it stretches it vertically.

"In our Dacia philosophy, we have the Duster to off-road and the Sandero for everyday life. This is more for the family road trip. You can put everybody in the car, you close the doors, you put your sports stuff on the roof and you can you can go wherever you want. And even if the road conditions are bad, no problem."

Would you have liked it to be four-wheel drive?

"Yes, it could have been interesting, but for this car, I don’t think it’s necessary. Okay, [it could be useful] for the snow, but apart from that, you won't really use the four-wheel drive. It’s extra cost and extra weight. And we prefer to put this this energy into the comfort in the third row, in some cool features and to keep the price as low as possible."

Is this the new Skoda Yeti?

"The Yeti wasn’t on our moodboard, but we thought about it when we were doing the drawings."

Which came first, the Sandero or the Jogger?

"We started with the Sandero. It was still under construction when we started to think about the Jogger. And because of this, we could influence back onto the Sandero. For example, the [trailing edge of the front] door line: if it starts to accelerate too early, you will have this little line going down too much. So we managed to make it finish almost horizontally [on the Sandero]. We modified it to fit much better with the Jogger."

I'm really liking what Dacia are doing here. Getting sick of reading about ordinary small costing in excess of £30k. Somehow I thing we're going to see many more Dacia's on our roads. I know two people who've given up their beloved Fiestas for Sanderos.

I think the mainstream manufacturers should drop all the 'going upmarket' crap and in-car distractions (sorry, 'tech') and bring their prices back down to Earth - if Dacia can, they should be able to.

@ianp55, I agree that this will appeal to the same type of buyer who might be in the market for a Berlingo/Rifter, but they are quite a bit bigger than the Jogger, which partly justifies their higher prices? I can see this Jogger being successful - for once a new car with a good price!