BACK TO ALL NEWS
Currently reading: New 2021 Porsche Cayenne Turbo GT: 631bhp super-SUV revealed
UP NEXT
Analysis: Why the decline in diesel sales has slowed in 2022

Coupé-only body style for the hardcore model, which is available to order now
Open gallery
Close

Porsche has lifted the veil on the 631bhp Porsche Cayenne Turbo GT, which promises new levels of performance, dynamic ability and driver engagement.

Set for UK delivery from September, the new model is based on the Cayenne Coupé Turbo and is Porsche’s most powerful ICE-only SUV yet. The Cayenne Turbo GT brings a raft of developments that have already shown their worth at the Nürburgring, where the car recently established a new lap record for production-based SUVs with a time of 7min 38.9sec. That’s more than three seconds quicker than the Audi RS Q8 managed in 2019.

Conceived to combine the outright performance capability of the Cayenne Turbo and Cayenne GTS models, the new range-topper is visually differentiated from its siblings by a series of styling changes, all of which are described as functional measures for more efficient engine and brake cooling as well as added stability and downforce.

They include a new lip spoiler with enlarged cooling ducts at the base of the redesigned front bumper; a modified roof spoiler with new carbonfibre wing elements; and a 25mm- wider rear spoiler that is said to provide the Turbo GT with an added 40kg of downforce at its electronically limited 186mph top speed when fully deployed from the tailgate. Additionally, the door mirror caps and lower part of the rear diffuser are made from carbonfibre, while the twin tailpipes exit centrally to enhance airflow underneath the car. 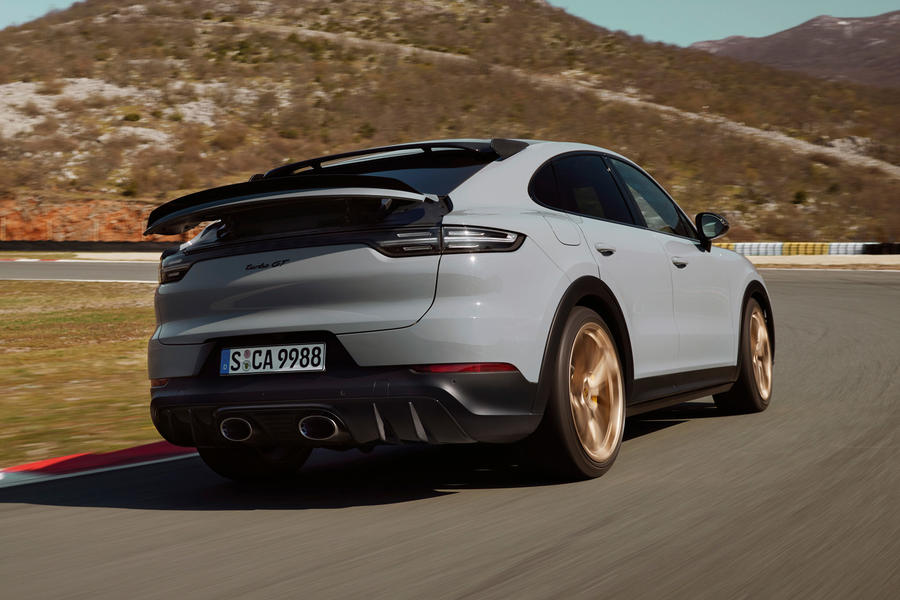 The Cayenne Turbo GT also receives 22in wheels, which are 10.5in wide at the front and 11.5in wide at the rear and finished in either gold or black. They’re shod as standard with 285/35-profile front and 315/30 rear Pirelli P Zero Corsa performance tyres that Porsche claims were designed specifically for the new model.

Inside, there is a new sports steering wheel that houses a Sports Response button, as seen on all of Porsche’s hottest models, as well as electronically adjustable sports seats up front and two individual seats in the rear. Interior stitching and seatbelts are available in gold or grey, while new Alcantara accents hint at the new variant’s performance aspirations.

The Turbo GT is the first Cayenne to receive Porsche’s new PCM 6.0 communication system, which brings enhanced functions for the infotainment, including compatibility for both Apple CarPlay and Android Auto as standard.

Power for the Turbo GT comes from a reworked version of Porsche’s twin- turbocharged 4.0-litre V8 petrol engine. It gains an added 89bhp and 52lb ft over the standard Turbo, developing 631bhp and 627lb ft of torque. That puts it second only to the 670bhp Cayenne Turbo S E-Hybrid in the line-up in terms of output.

The changes made to the engine include the adoption of a modified crankshaft, additional turbocharger boost pressure and subtle tweaks to the fuel injection, induction and intercooler. 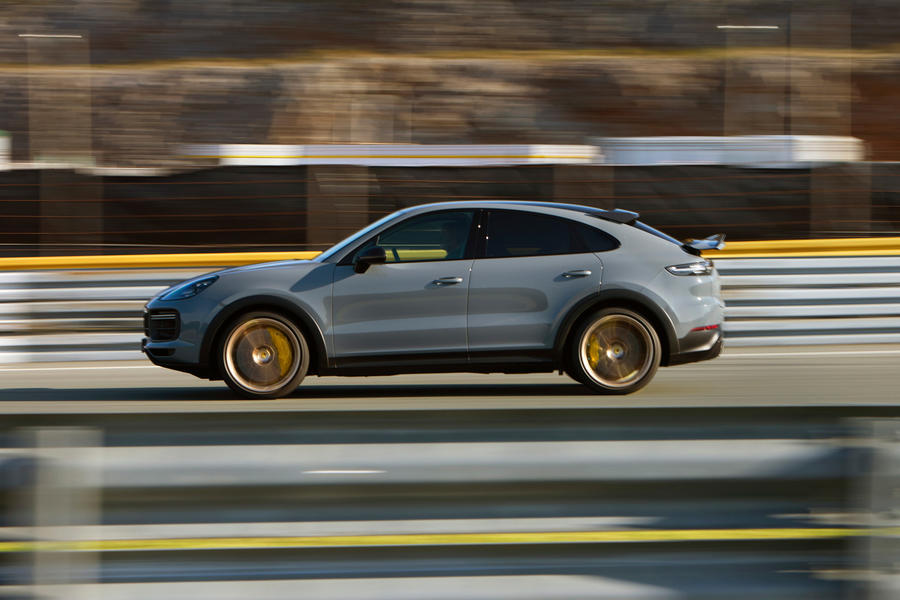 For comparison, the same engine delivers 592bhp and 590lb ft in the RS Q8 and 641bhp and the same 627lb ft in the Lamborghini Urus. The increased reserves are sent through a reworked eight-speed torque-converter automatic gearbox, which features new software that’s claimed to shorten response times and a water-cooled transfer case.

Porsche claims a 0-62mph time of 3.3sec for the Turbo GT when fitted with the optional Sport Chrono package, a reduction of 0.6sec over the Cayenne Coupé Turbo and 0.3sec quicker than the Urus.

The beefed-up mechanicals are joined by a reworked chassis with a 17mm reduction in ride height, 0.45deg of extra negative camber on the front axle and carbon-ceramic brake discs at each end – 440mm in diameter at the front and 410mm at the back.

Additionally, the spring rates for the three-chamber air suspension have been firmed up by 15%, the active roll stabilisation system has been retuned to offer flatter cornering behaviour and the rear axle steering has been tweaked with specific mapping as part of a Power Steering Plus upgrade package.

The Turbo GT is available to order now, exclusively in the Coupé bodystyle, with UK prices starting from £143,910.

Log in or register to post comments
s1mong 30 June 2021
A question: At what point does a SUV become an ordinary vehicle? You spend a fortune developing a high riding, roomy, comfortable vehicle and then spend another fortune reducing its ride height, fitting harder suspension and developing a hatchback body . . .
jason_recliner 30 June 2021
Carbon fibre door mirror caps! Wowee!
michael knight 30 June 2021
So realistically this could be a sub 3 second 0-60 SUV.
Lunacy
View all comments (6)