From £64,8707
Plug-in hybrid bruiser arrives on UK shores with up to 19 miles of electric range
Open gallery
Close

Time was when the wildest Porsche generally took the form of a turbocharged 911 with four-wheel drive and a wing, at least as far as spec-sheet figures went.

Following the launch of the latest 911 Turbo S – a car with 641bhp, a 2.6sec 0-62mph time, hips wider than a bin lorry, and a wing – you could argue that nothing has changed. However, if you accept modern Porsche is really now an SUV company that builds proper sports cars mainly to protect its pedigree (last year, it sold almost 200,000 Cayenne and Macan models compared with only 80,000 of everything else) then the 'wildest', most ambitious model it makes is now the £123,000 Cayenne Turbo S E-Hybrid.

The car's plug-in hybrid powertrain has previously cropped up in the Panamera and we’ve already driven the Cayenne Turbo S E-Hybrid abroad, but now we have one in the UK for the first time and the numbers don’t get any easier to swallow with repeat readings. Altogether, you have 671bhp and 627lb ft, the majority of which is delivered via a front-mounted 4.0-litre twin-turbo petrol V8. The rest is provided by an electric motor, although both sources drive through the same eight-speed dual-clutch gearbox, which is operating near the limit of its torque-channelling potential. With a stronger ’box, as much as 850lb ft would be possible.

From a standstill, the Cayenne Turbo S E-Hybrid is therefore only around a second slower to 62mph than the 911 Turbo S, which is absurd, but performance is only half the story. The 14.1kWh battery pack under the boot floor gives the car an electric-only range of up to 19 miles (down from an unrealistic, pre-WLTP figure of 27) and a CO2 figure of 90g/km, which looks almost as ridiculous as the acceleration figures. It's a mutant powertrain fitted to arguably the best road-biased SUV money can buy, which ought to make the Cayenne Turbo S E-Hybrid compelling on several levels. 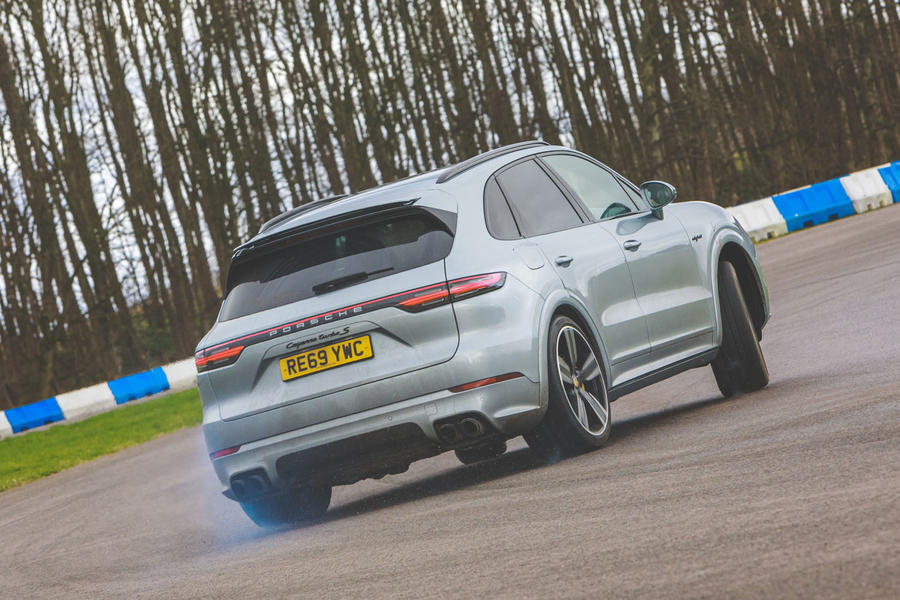 Adept at oversteer and outrageously quick. Even before luggage and passengers are accounted for, the car weighs 2490kg, which is 315kg more than even the regular Cayenne Turbo, and yet it still level-pegged with the new Audi RS6 Avant during an impromptu drag race, making up for its heft with tectonic torque and seamless gearshifts. There aren’t many full-sized SUVs that will give you a proper punch in gut from acceleration, but this is one of them.

The rest of the time, you’ll marvel at how effortlessly the two sources of power co-exist. The car starts in electric mode, and once you’re up and running, it will look to switch off the engine as much as possible, particularly when coasting on quicker roads or crawling around town. The transitions are quick and smooth, so you’re never caught short for acceleration, although the V8 always starts with an unmistakable growl and sets the bodyshell throbbing in almost comically dramatic fashion.

Hybrid mode, in which the car adapts to the driving style, is particularly good at knowing exactly when to fade out the engine, feed it back in or give in to the whims of the driver’s right foot and provide absolutely everything on offer. In this sense, the Turbo S E-Hybrid is as easily driveable as any comparably big SUV, only with more accurate steering and better body control than most, as you’d find with every Cayenne in the range.

Moving up through Sport and Sport Plus modes is mostly unnecessary, although doing so will progressively stiffen the air suspension, sharpen the throttle response, alter the torque split and trigger the brake-based torque-vectoring to better sling the car through corners – and then replicate a limited-slip differential on the way out. Our car also had optional four-wheel steering although, as with all the best applications, you’ll really struggle to sense it working. It’s an arsenal of chassis tech arguably more impressive than the complex powertrain (and we shouldn’t forget the active anti-roll bars, which are driven by a 48V system).

The result is a family car that will do a passable impression of a sports car on track and, on the road, goes from A to B at rate that, jokes aside, almost immediately feels irresponsible given the size of the car. It's hard to think how they could have made it more agile, short of giving it an entirely carbonfibre body or somehow else removing a good portion of the weight.

The problem is that the weight remains ever present and even the carbon-ceramic, 10-piston brakes and very neatly controlled body movements can’t mitigate it. Logical thinking tells you the contact patches are so vast and the driveline so fast-reacting and clever that you’re unlikely to come unstuck with the correct steering and throttle inputs. And yet the synapses in your backside and brain are constantly sensing the magnitude of the physics that would be unleashed if something did go wrong. It’s pretty draining, frankly, because the Cayenne wants to be driven quickly and reminds you of that often. A Range Rover doesn’t do this and is therefore better company more of the time.

It all makes the Turbo S E-Hybrid a bit of a one-trick pony: not so satisfying to drive as ‘lesser’, lighter Cayenne models but needing, deep down, to be driven damned fast to show you what it can do and earn its keep. And there are better-conceived plug-in hybrids, too. BMW’s X5 45e costs half the price, goes twice as far on electric power alone, isn’t exactly short on performance and ultimately consigns this wild Porsche to curiosity status unless you really have to have the most extreme of everything. 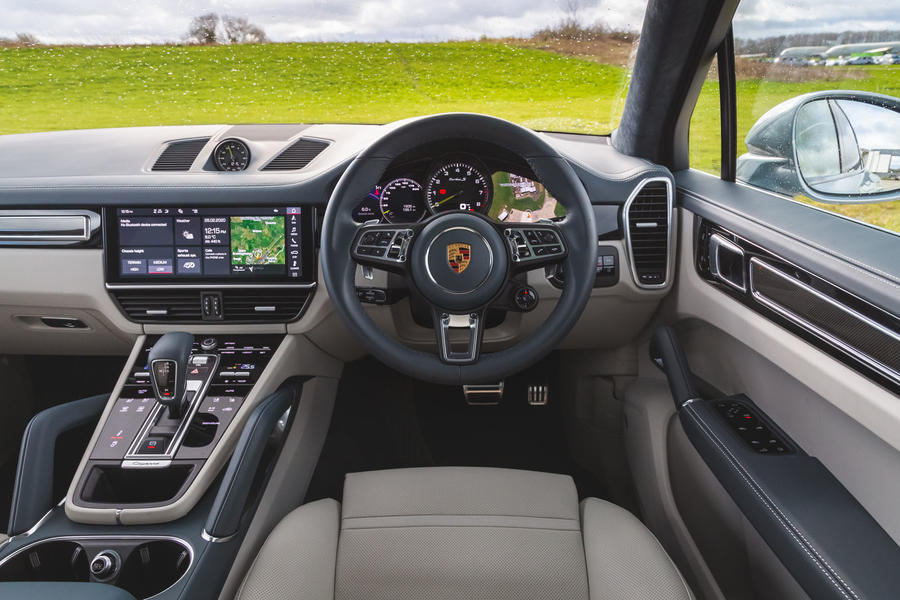 I'm afraid not. There will be some for whom the electric range (bank on no more than 16 miles, whatever the official claims) will be useful on a daily basis, but those miles will be undertaken in fairly sedate nature, when the fastest but heaviest Cayenne’s necessarily firm and tightly controlled ride is… completely unnecessary.

Equally, the electric portion of the powertrain contributes less in performance than it takes away from the handling and steering, which are both dulled. With 542bhp, if you really want to, you can still scare yourself witless in the regular Cayenne Turbo, and that car is a more natural, enjoyable and considerably cheaper point-to-point machine than this hugely capable, strangely likeable, creditably wild but largely pointless hybrid. Alternatively, there's always the Audi RS6 Avant. 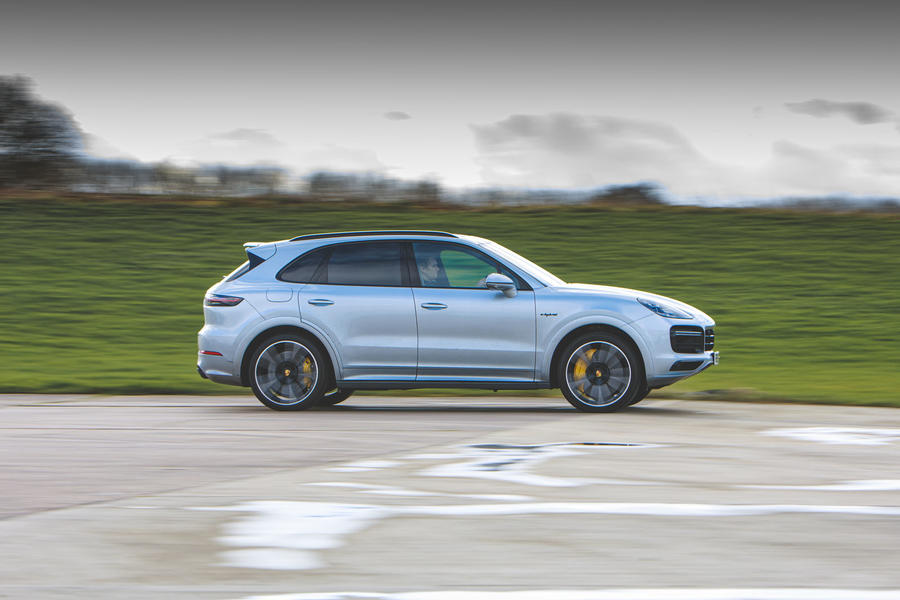 Excellent piece of writing as others have stated already.

Also some perspective from heavily-taxed countries regarding the pricing and positioning of this deeply impressive car; for instance on Finland, due to its hybrid abilities, the Turbo S is actually 70k€ cheaper than the regular Turbo. It is also at 195k€ a few grand cheaper than the new RS6 Avant.

Therefore it makes perfect sense in countries and markets such as ours, also saving hundreds in yearly car tax (yes we've got that too). Thinking that a Bentayga is nearly double what this costs and you want a super-SUV, what else would you realistically consider?

How these cars are helping Porsche dodge EU emission laws I'll never know. Just think a single minor change in BIK could wipe these cars out

How these cars are helping Porsche dodge EU emission laws I'll never know. Just think a single minor change in BIK could wipe these cars out

What a PIG, totally useless,

What a PIG, totally useless, poor handling due to weight, this certainly does nothing to save the planet.On the other end of the scale I do hope a 914 will be built, like a modern lotus Elan, but better built