When it makes its debut later this year, the new top-end version of the Porsche Cayenne Turbo will give Porsche a direct rival to the likes of the Lamborghini Urus and Bentley Bentayga Speed.

Promising up to 631bhp from a tweaked version of Porsche’s twin-turbocharged 4.0-litre V8 petrol engine, the as-yet unnamed model will be sold exclusively in the Porsche Cayenne Coupé bodystyle and sit above the existing Cayenne Turbo in the line-up.

A focus on weight reduction will make it significantly lighter than the Porsche Cayenne Turbo S E-Hybrid, which produces a combined 671bhp from a petrol V8 and electric motor but weighs 2535kg.

Ahead of the new Porsche Cayenne Turbo's official reveal, we were invited to drive a prototype representative of the production version, albeit with some light disguise covering various exterior details, including a reworked roof spoiler and new wing elements. The 22in Neodyme wheels are a further giveaway to the new model's added performance potential.

Inside, the changes are more subtle. Up front, there is new Alcantara trim with contrasting stitching, sports seats and a thicker-rimmed sports steering wheel with a Sport Response button that allows you to select the various driving models via a rotary controller. In the rear, the three-seat bench is replaced by a pair of individual seats, giving the interior of the new model a more distinct 2+2 character.

Heading out of Stuttgart, the remarkable thing about the uprated Cayenne is just how unremarkable it feels in everyday traffic in Comfort mode, given that you expect an SUV that has been honed to run records at the Nürburgring to be hardcore at all times. The adaptive air suspension features dampers that are 15% firmer than today’s model. And, yes, there is a purposefulness to the way it rides, but precious little else that would convince you it couldn’t be used every day. 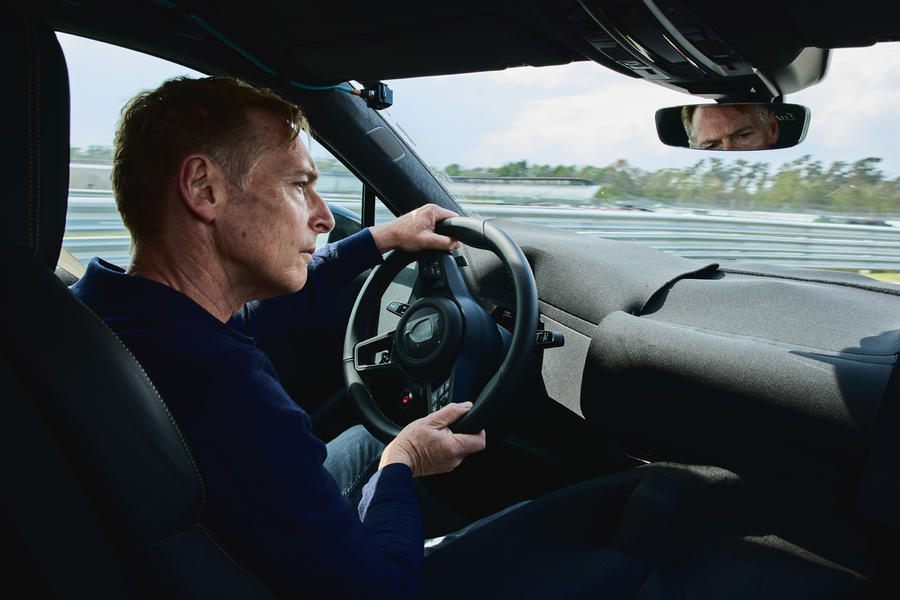 The great thing about four-wheel steering is that it not only helps improve agility at speed but also provides added manoeuvrability at lower speeds. It’s a blessing in urban driving situations, helping to provide a relatively tight turning circle and general ease of use.

As we reach more open roads, it’s the twin-turbocharged 4.0-litre petrol engine that comes under focus. There’s a wonderful tractive nature to the reworked V8; power delivery is smooth and, despite added turbocharger boost pressure, comes without any discernible lag. With a fleeting nudge of the throttle pedal, you’re already well on the way to triple figures.

It’s further up the rev range, though, where the detailed changes to the engine really make their presence felt. The mid-range punch is ferocious, firing the four-seater along with all the intensity of a much smaller, lighter supercar on a wide open throttle. It pulls harder, and with added enthusiasm, than the 542bhp version of the same engine.

Hit Sport mode with a stretch of clear autobahn ahead and the acceleration is nothing short of relentless. The wind buffeting is quite extreme up around those speeds, but increased downforce and enhanced airflow courtesy of the larger rear spoiler and diffuser promote outstanding straight-line stability. The experience is enhanced, too, by the exhaust note, a deep growl that grows harder in intensity and volume all the way up to the 7000rpm redline, from the new model’s standard titanium exhaust system.

The carbon-ceramic brakes are brilliantly effective at hauling the big SUV down from big speeds and, later on, during hot laps of the Porsche driver training circuit at the Hockenheimring. There’s some initial vagueness at the top of the pedal's travel until proper heat is built into the discs. But once it is, the new Porsche stops as securely as any 2200kg-odd SUV has any right to. 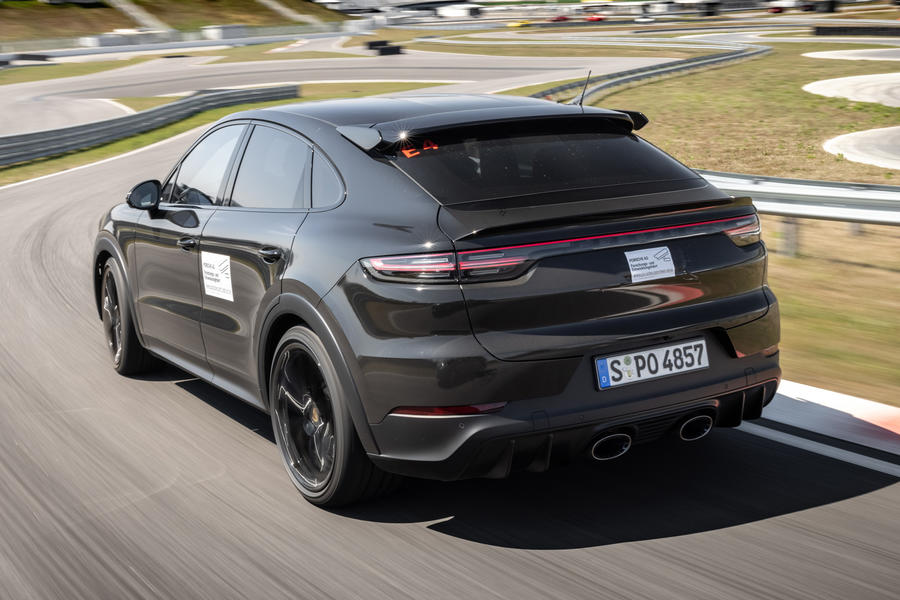 The aluminium-intensive suspension set-up features a combination of double wishbones up front and a multi-link arrangement at the rear, providing up to six different ride heights, the lowest of which takes the Cayenne’s ride height down for a lower centre of gravity. It is controlled via what Porsche calls a '4D Chassis Control' system, which includes electromechanical anti-roll bars and rear-wheel steering as standard. It is the same set-up used on the Audi RS Q8 and Lamborghini Urus, with its own dedicated 48V electric system.

The first thing you notice on a suitably winding road is the added response. Regardless of the drive mode – and there is quite an array of them – the new king-of-the-hill Cayenne feels more urgent than any existing iteration of Porsche’s largest car.

There’s added heft to the weighting of the electromechanical steering, and it feels more responsive than the standard Cayenne Turbo Coupé. This can be attributed to the additional negative camber, as well as the new wheel and tyre package and wider track. There is not a lot of feedback through the thick rim  of the steering wheel, but there’s plenty of bite at the front end and tangibly sharper turn-in as you commit to a corner.

It’s the rear-wheel steering that continues to define the handling, though. Modified to provide a greater degree of rear steering angle, it quickly rotates the rear to quell any understeer on challenging roads and provide outstandingly neutral cornering qualities. The new Porsche changes direction beautifully and without drama.

We’ll have to wait a few months before we get the chance to drive a production version of Porsche’s most powerful non-hybrid Cayenne model. But we’ve learned enough from this prototype to know that Lamborghini suddenly has a lot more competition on its hands for the Urus.

Log in or register to post comments
si73 20 May 2021
So when available it will enable Porsche to have a direct rival with its sister companies, Lamborghini and Bentley, high performance SUVs, seems daft to me.
Peter Cavellini 20 May 2021

I'm not particularly a fan either, but, if was a car maker, and I saw an opening in the car market, it would be remiss of me not to exploit it, yes, they're just jacked up SUV, but, they do handle well enough, and it's the biological bit that drives it that doesn't realise the limitations of an SUV .

BlahBlah43 20 May 2021
Here's an idea. Take the Urus platform, its suspension, its brakes , and its powertrain and put it into a Cayenne body. Oh wait..
View all comments (4)