A pure-electric Mini will finally go on sale later this year, a decade after the firm’s first public EV trials - and we've driven a prototype
Open gallery
Close

It has taken a decade but at last there’s an electric Mini that we can buy. Or there will be soon.

Our drive of this prototype is a prelude to the launch of the finished article at the end of this year. That car was initially called the Mini Cooper SE, the S implying equivalence to the 189bhp petrol Cooper S and the E that it’s electric - though Mini has now annnounced it will carry the far simpler Mini Electric name. Its motor puts out 181bhp and 199lb ft of torque, the latter slightly adrift of the S’s 221lb ft, but they’re comparable.

Although there was a 2013 electric Mini concept, the 2009 Mini E project was a more substantial undertaking, being part of a test programme in which more than 500 vehicles were publicly trialled. This full-production electric Mini shares plenty of characteristics with the 2009 Mini E, among them brisk-to-rapid, instantly available acceleration, notable deceleration when you release the throttle and a pleasingly easy drive.

But there are also substantial differences, not the least of them being the restoration of the rear seats and a boot. Both of these spaces had been sacrificed to bulky battery and power electronics in the experimental car. The new version’s battery occupies the tunnel running the length of the cockpit and the area previously taken up by the fuel tank to occupy a T-shaped space, requiring almost no changes to the Mini’s body-in-white.

That there have been any at all is because BMW, Mini’s parent company, did not anticipate that the power density of batteries would improve fast enough to allow a viable pack to be installed in the current Mini hatch. In fact, the battery pack has slightly fewer cells than the BMW i3’s, offering 92Ah rather than 94Ah of stored energy, and its protrusion below the floor has necessitated a slight ride height rise. Despite this, the Mini Electric’s centre of gravity is lower than the Cooper S’s, promising sharp handling. 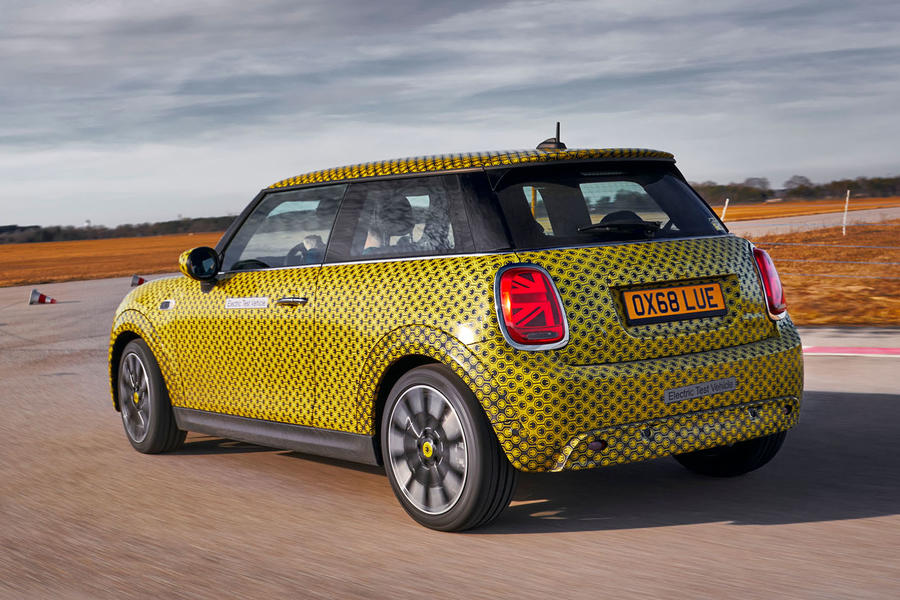 The suspension uses the standard hardware save for some reinforcing of the lower front arms, the spring and damper settings also altered to suit the additional weight and its revised distribution. More subtly, the cosmetic wheel-arch extensions have been widened to compensate for the ride height gain and the reduced choice, compared with the Cooper S, of smaller 16in or 17in wheels.

Much of the rest of the SE’s hardware was available when the i3 was launched in 2013, this production electric Mini sharing the i3’s synchronous electric motor, power electrics and lithium ion battery cells. A more significant difference is that the Mini is front drive, the motor living in its usual home beneath the bonnet, whereas the i3 is rear drive, its motor located below the boot floor.

This Mini weighs more than the i3, of course, because its core structure is steel rather than lightweight carbonfibre, the penalty being an extra 80kg. Compared with the petrol-engined 2.0-litre automatic Cooper S that Mini considers the Electric to be the equivalent of, it weighs an extra 130kg – not bad for an EV. The additional weight shifts the axle loads rearwards, to a more favourable 54:46 front to rear rather than 60:40.

The Cooper SE’s more powerful i3S motor yields a 0-62mph time of “between seven and eight seconds”, says BMW, and similar top speed of around 95mph. The official performance statistics have yet to be confirmed. That includes the Cooper SE’s range, which is reckoned to be equivalent to the less powerful standard i3’s at 160 miles in real-world use. That means this EV is not one of the latest breed, Jaguar I-Pace, Hyundai Kona and Kia e-Niro among them, that can deliver the more usable range achieved by Tesla.

However, the Mini is smaller than any of these, of course, and is more likely to be a short-distance car. As the experiments with the earlier, 90-mile-range Mini E demonstrated, this is less inconvenient in practice than it sounds. 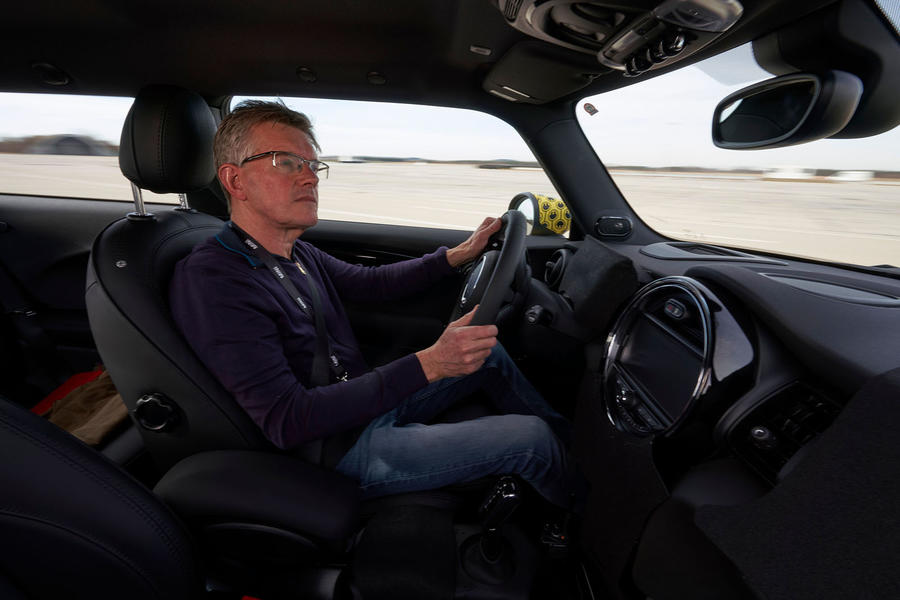 The evolution of that car into this, which spans a complete generation change incidentally, sees this Mini’s usable package uncompromised by the change of motive power. It’s entirely familiar to sit in, too, bar some of the instrument displays, which were not yet ready for viewing, and the deletion of the handbrake.

Moving off is quite different, despite one’s thumbing of the starter toggle of conventionally propelled Minis. You hear a lightly jangling, otherworldly start-up jingle to confirm that your electrified Mini is on, engage ‘D’ and whirr off, to the aural accompaniment of not much at all unless the tyres are riding a coarse road surface.

The go is instant if you want it to be, as with every pure EV, and there’s plenty of it. There’s plenty of slowing down, too, if you select the strongest of the Mini’s recuperation modes, which decelerates the car at a rate of 0.19g. That may not sound so much, but it’s easily enough that you can dispense with the brake pedal in most urban circumstances.

Alternatively, you can flick a dashboard toggle to diminish it to 0.11g, these two values sitting either side of the deceleration rate of an i3. It’s a shame that the toggle sits distantly in a row of switches at the base of the centre console, though. The Kia e-Niro’s paddles are a more convenient way to tune your deceleration rate.

So how does this Mini handle? Most Minis of the past 60 years, including most of the BMW-era cars, have served the kind of happy-golucky handling that allows you to chuck the car into a bend and adjust your route with the accelerator, a particularly bold fling-cum-throttle drop producing a (usually) helpful slide from the rear. And all with very little body roll. That’s exactly what you get with this ampere-powered version. 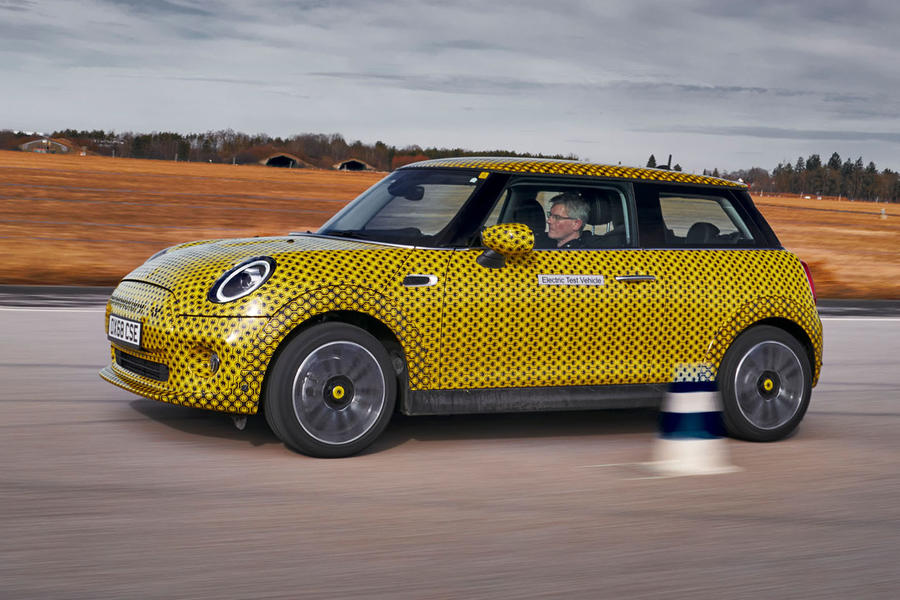 On a coned test track, the Mini Electric proves to be almost as entertaining a drive as a Mini with a manual transmission, more than one gear and an enthusiastic exhaust note, a succession of laps producing an entertainingly familiar physical experience, if a different aural one.

Before discovering that, though, comes a demonstration of a new method for controlling a surfeit of torque when it’s applied to a shortfall of grip. We drive the electric Mini onto a wetted section of Tarmac and floor the throttle, as instructed. It launches, fast, and without a hint of wheelspin or, more telling, spot braking of either front wheel.

That’s because this traction control system uses the engine management system to staunch the excess torque at source, rather than restoring grip with a momentary clenching of calipers. It’s a less wasteful way of modulating power and it seems to work well, both from standing starts and when cutting through corners.

Less impressive is the springy, almost feel-free steering, which has yet to be calibrated. This apart, and the occasional sensing of its extra heft, this Mini handles like a Mini. It’s likely to cost close to £30,000, less any grant, but will come slightly better equipped than the Cooper S when it goes on sale late this year.

The first UK deliveries from Mini’s Oxford plant are due in March 2020. It makes a fitting development for the Mini’s 60th anniversary, and if hardly a ground-breaker, particularly in range terms, it should usefully widen the appeal of electric cars.

The article you have shared here very awesome. I really like and appreciated your work run 3

No way! £30K for a MINI? BMW are taking the proverbial here!

That said, the tenacity of manufacturers is matched by the gullibility of (some) customers who will buy anything at any price because it is the 'right thing to do'...

Before we know it, such ridiculously high prices will be the norm, simply because some are already accepting them!

Why the poor range compared with the E-Niro

Why with a much bigger battery (92A/H against 64A/H) does the e-Mini Cooper S only have just over half the range of the Kia e-Niro? Are the battery capacities not comparable because of different voltages? If so then the Amp/Hour measurement is meaningless and a Kilowatt/hour figure would be much more useful to compare battery capacities. 160 mile range at best (in warm but not hot weather, with no air-con running, from experience with my Porsche PHEV) relegates the Mini to being a second car, which makes it an expensive proposition.