BACK TO ALL NEWS
Currently reading: Mercedes-AMG GLC 43 Coupé revealed
UP NEXT
Volkswagen ID 3 vs Nissan Leaf: Battle for the EV top spot

Mercedes has revealed the GLC 43 AMG Coupé ahead of its debut at the Paris motor show at the end of next month.

This equates to a 0-62mph time of 4.9sec; identical to its standard-bodied GLC 43 sibling and 0.3sec down on its E-Class counterpart, onwards to an electronically limited top speed of 155mph. Fuel economy and emissions, according to Mercedes’ figures, are 33.6mpg and 192g/km CO2. The AMG GLC 43 Coupé is 7bhp and 39lb ft up on its only direct rival – the 355bhp BMW X4 M40i, and also has the weight advantage over the BMW; the GLC is 60kg lighter at 1780kg. In spite of these, the two are equally matched in acceleration, and their electronic top speed limiters kick in at identical speeds.

The heavier and more expensive Porsche Macan GTS is slower to 62mph than both by 0.3sec but is 4mph quicker at the top end. It’s only the range-topping Macan Turbo that bests the AMG and M40i’s acceleration, but at more than £63,000, is considerably more expensive for the 0.1sec lead it builds in the 0-62mph sprint. The full-fat GLC 63 Coupé will likely rival the Porsche more closely upon its launch - it's expected to have up to 503bhp from a 4.0-litre V8, which is shared with the other 63-badged models. Also like the standard GLC, the model is given AMG-tweaked all-wheel drive, which shares the torque between the front and rear wheels at a ratio of 31:69, along with Mercedes’ 9G-Tronic automatic gearbox, which benefits from shortened shift times.

The transmission can be operated in both automatic and manual setups, but defaults to automatic – a centre console-mounted button needs to be pushed to engage manual mode.

Aside from this, there are five modes to choose from in the car’s Dynamic Select menu; Eco, Comfort, Sport, Sport Plus and Individual, all of which tweak the engine, gearbox, speed-sensitive steering and suspension, depending on what is selected. Cylinder shut-off technology and start-stop are also included in this. 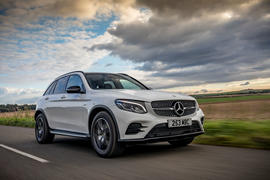 AMG's treatment of the GLC turns it into a point-to-point weapon, but not to the detriment of the car’s comfort or practicality

On the outside, the car follows the same formula as the other 43-badged AMG models; quad exhaust tips, more subtle sporting bodywork and styling than the full-fat AMG 63 range, and 19in twin-spoke alloy wheels, although wheel upgrades up to 21in can be selected on the options list.

Inside, the upholstery is trimmed in black leather, with red accents. Aluminium trim also features across the interior. A multifunction steering wheel gets the same colour combination. The standard infotainment system on the car is a 7.0in setup, with Bluetooth and USB connectivity, as well as a race timer included in its functions. Specs will mirror the GLC 43 SUV. The GLC 43 AMG Coupé also gets independent sports suspension with adjustable dampers as standard, with adjustable ride height and automatic self-levelling.

No you can't, yes we can

4 September 2016
This is a statement from Mercedes, directed at BMW. It reads, however ugly you think you can make a jeep, with your X6 and X4, we can make one just as ugly. Land Rover's Evoque remains the horror of them all though. They should have called it the iSore.