BACK TO ALL NEWS
Currently reading: Mercedes-AMG GLC 63 and GLC 63 Coupe to produce over 500bhp
UP NEXT
2021 Mercedes-AMG S63 due imminently with snarling V8 hybrid

Spy photographers have spotted a Mercedes-AMG GLC 63 Coupé testing one month after its sibling, the regular GLC 63, was last seen in public.

The two models share underpinnings and get longer bonnets than that of the regular GLC, to provide more space for the wet-sump twin-turbocharged 4.0-litre V8 that'll power them. Shared with models like the C 63 saloon, the engine is likely to produce up to 503bhp and 516lb ft, as it does in other models. 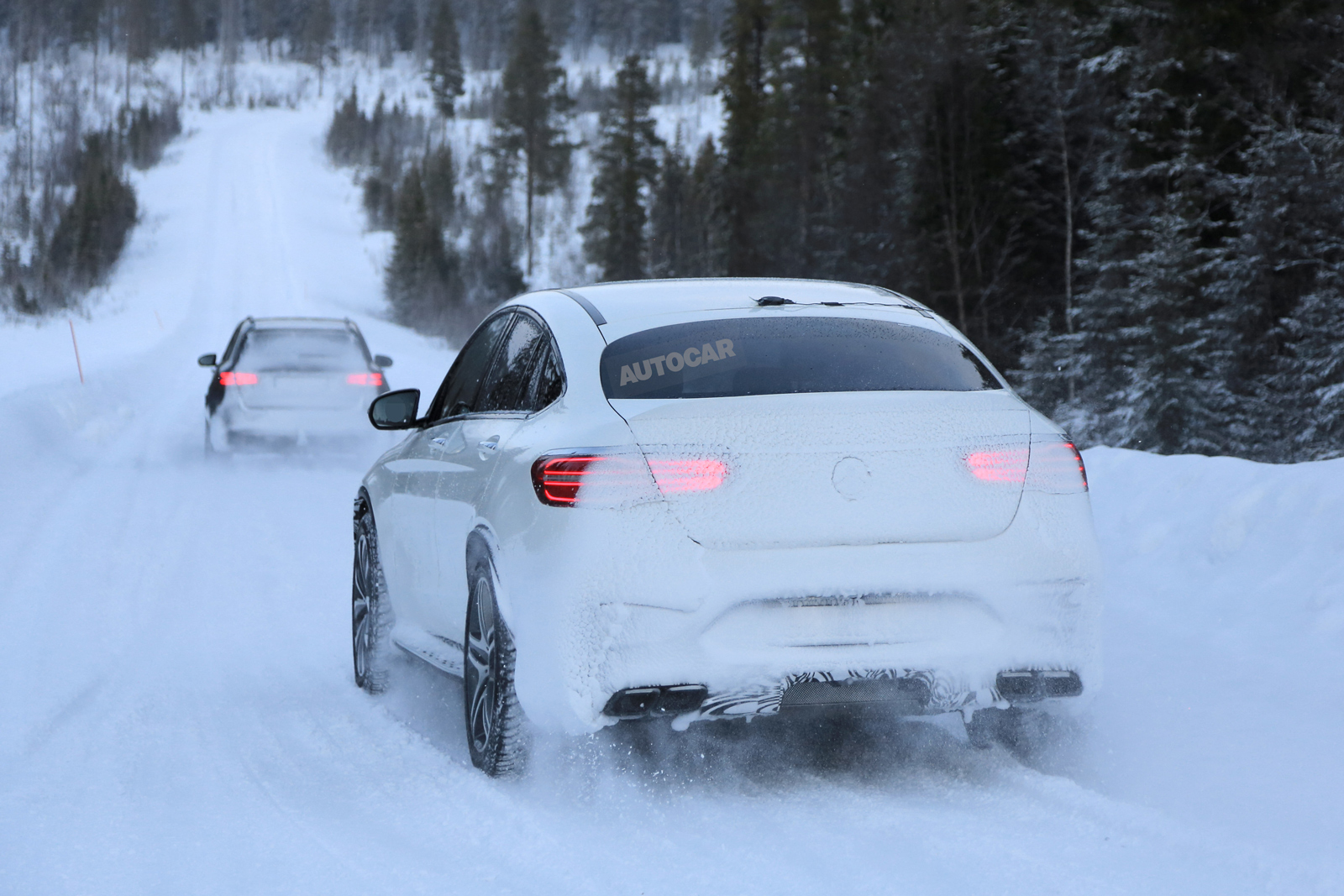 The next GLC models wear a new front bumper that’s larger than the ones fitted to earlier cars, and have wider air intakes, giving the super-SUV models a more muscular front-end look.

The regular AMG GLC 63, painted black, looks near identical to the GLC 43 and the white coupé looks similarly unchanged from the GLC 43 Coupé. It is thought the cars' interiors will also be identical to that of their siblings, which use a twin-turbocharged V6 engine to produce 361bhp and are both on sale already. 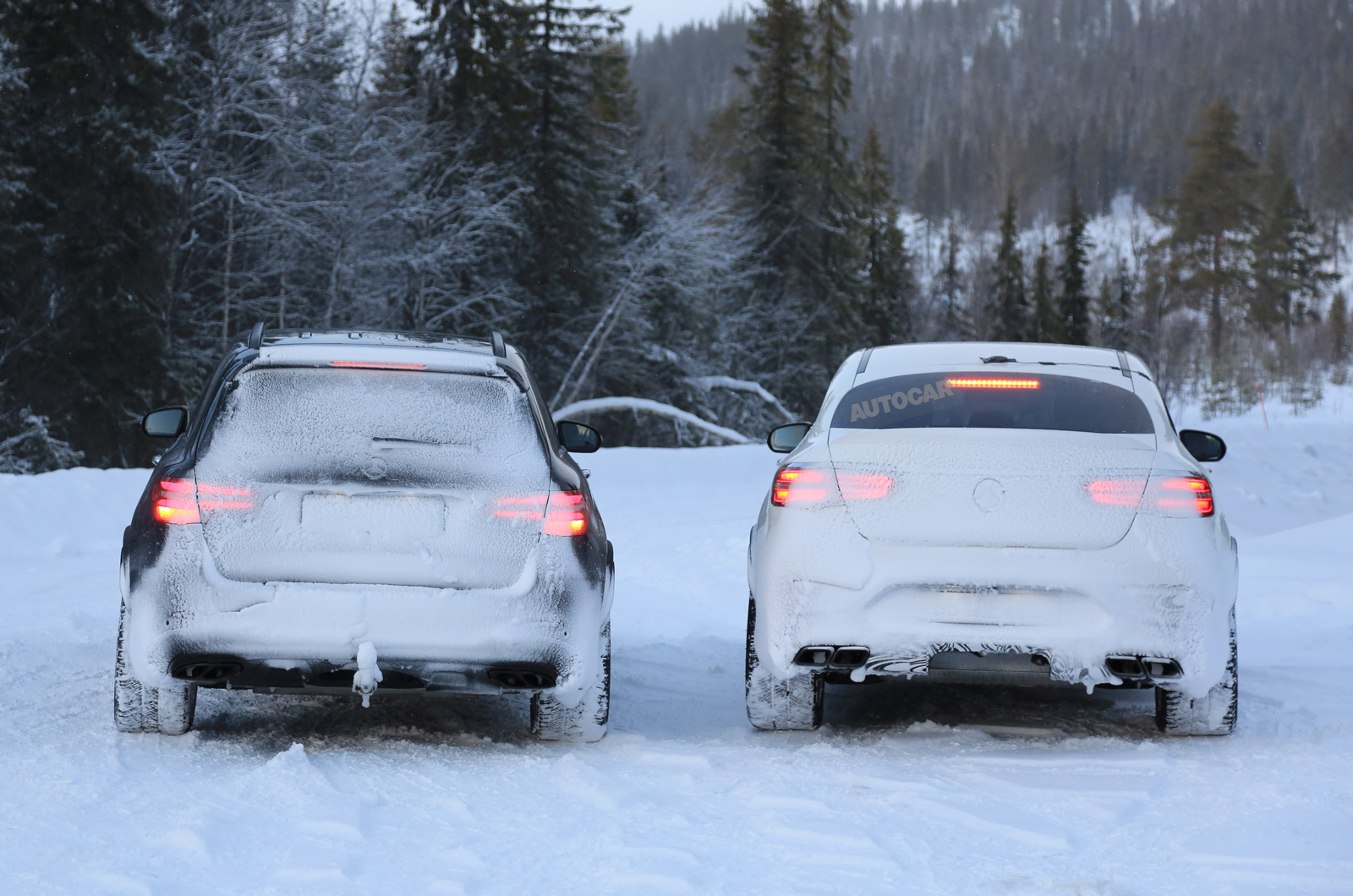 AMG boss Tobias Moers recently said AMG 63 models would retain rear-wheel-drive layouts, leading some to suggest the hottest GLC could be rear-driven only. However, the larger GLE 63 comes exclusively with 4Matic four-wheel drive, so it seems more likely that this layout will be offered on the GLCs.

AMG has set the GLE 63 up to send 69% of drive to its rear wheels, a similar level of rear-drive bias could be expected with 4Matic-equipped GLC 63s.

Sources expect the GLC 63 to arrive first at this year's Geneva motor show.

Finally then an affordable

Finally then an affordable 4Matic with the wonderful 4 Litre AMG V8,for those of us in snowy climates.With upcoming X4M I see a group test with the Macan Turbo S.Engine wise at least the Merc is my choice .I would love to have replaced my C63 with a 4Matic version but it was not to be.Eseaton is correct,Moers did say that about the new C63 sedan, but this is a GL which will be 4Matic for sure.
TS7 30 January 2017

...MB fix the appalling clunking/crabbing issue that affects RHD GLCs and other C-Class 4-matics, and the new E-class 4-matics for that matter, before it arrives here.
eseaton 20 December 2016

When did Moers say AMG 63s

When did Moers say AMG 63s would retain rear drive? That is exactly what they are not doing.

And which 'insider' has suggested the GLC63 would be RWD?

This is made up nonsense.

Does Sam Sheehan actually work for Autocar, or has he hacked their site for a laugh?