BACK TO ALL NEWS
Currently reading: Mazda: 2019 Skyactiv-X engine can boost economy by 30%
UP NEXT
2024 BMW X3 primed to take on Mercedes-Benz GLC

Mazda will put a new version of its 2.0-litre Skyactiv-X engine into production next year with the promise of up to 30% improvement in fuel consumption over the existing Skyactiv-G petrol.

That figure is said to be possible during low-speed driving, but the company claims that 20% is also possible in average real world driving scenarios. The target outputs for when the engine hits the market in 2019 is 187bhp and 170lb ft. 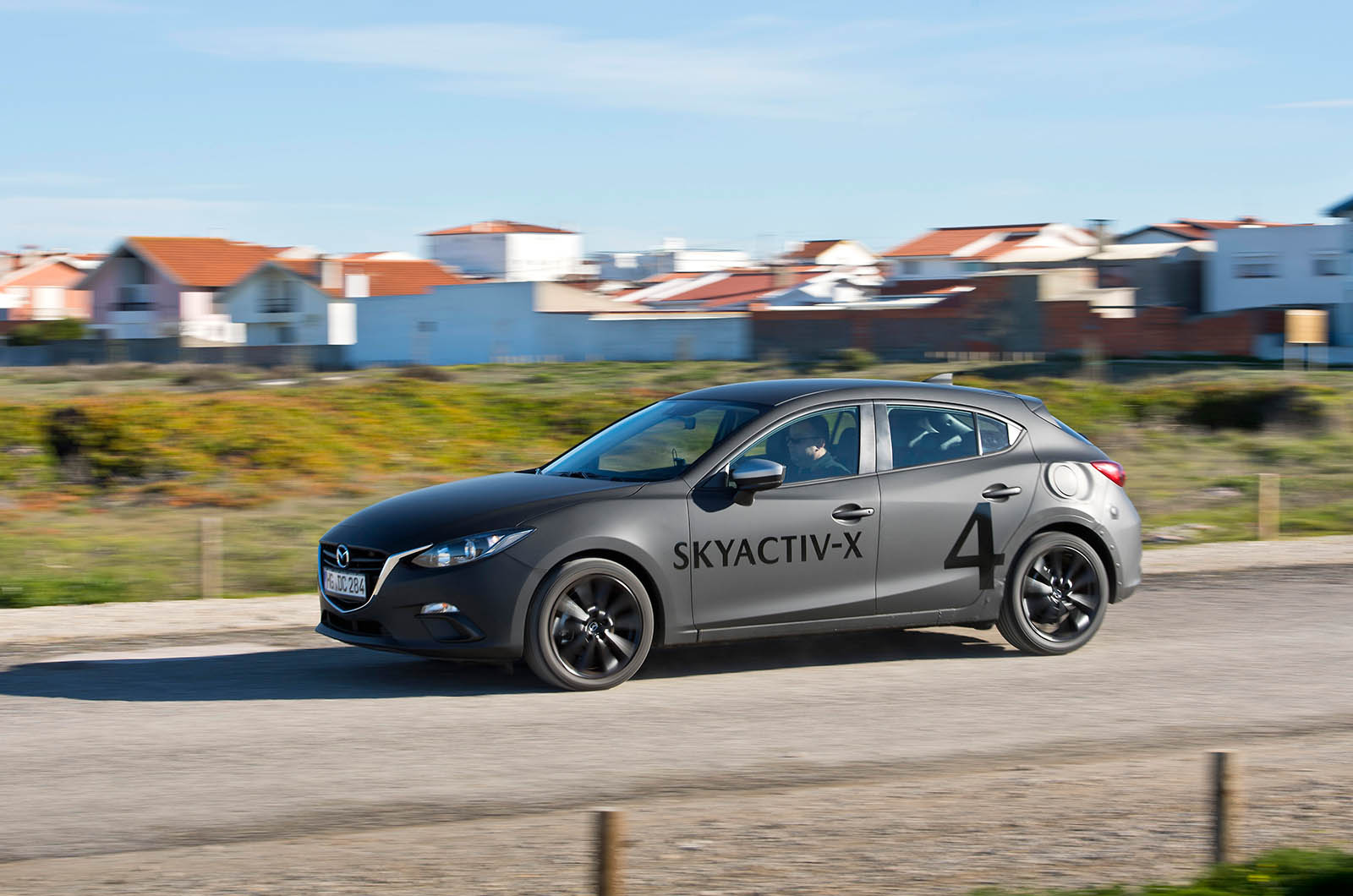 A conventional internal combustion engine mixes air with fuel at a ratio of 14.7:1, the perfect mixture to burn petrol in the cleanest possible way. Fuel is ignited by a spark inside the engine’s combustion chamber and burns progressively until it is used up in a split second. A leaner mixture can improve economy, but can be more difficult to ignite and leads to faltering combustion.

The Skyactiv-X technology successfully sidesteps those problems with spark-controlled compression ignition (SPCCI), which reliably ignites the entire lean air/fuel mixture of between 30:1 and 40:1 in one go. Extra air to feed the lean burn running is supplied by a small, belt-driven, Rootes-type air pump.

A higher-than-normal compression ratio of 16:1 produces almost enough pressure to combust the lean fuel-air mixture spontaneously, but not quite. That happens when a second dose of fuel is injected and fired by a spark to create a mini fireball. The extra pressure created by the fireball tips the simmering main charge over the edge and it ignites. 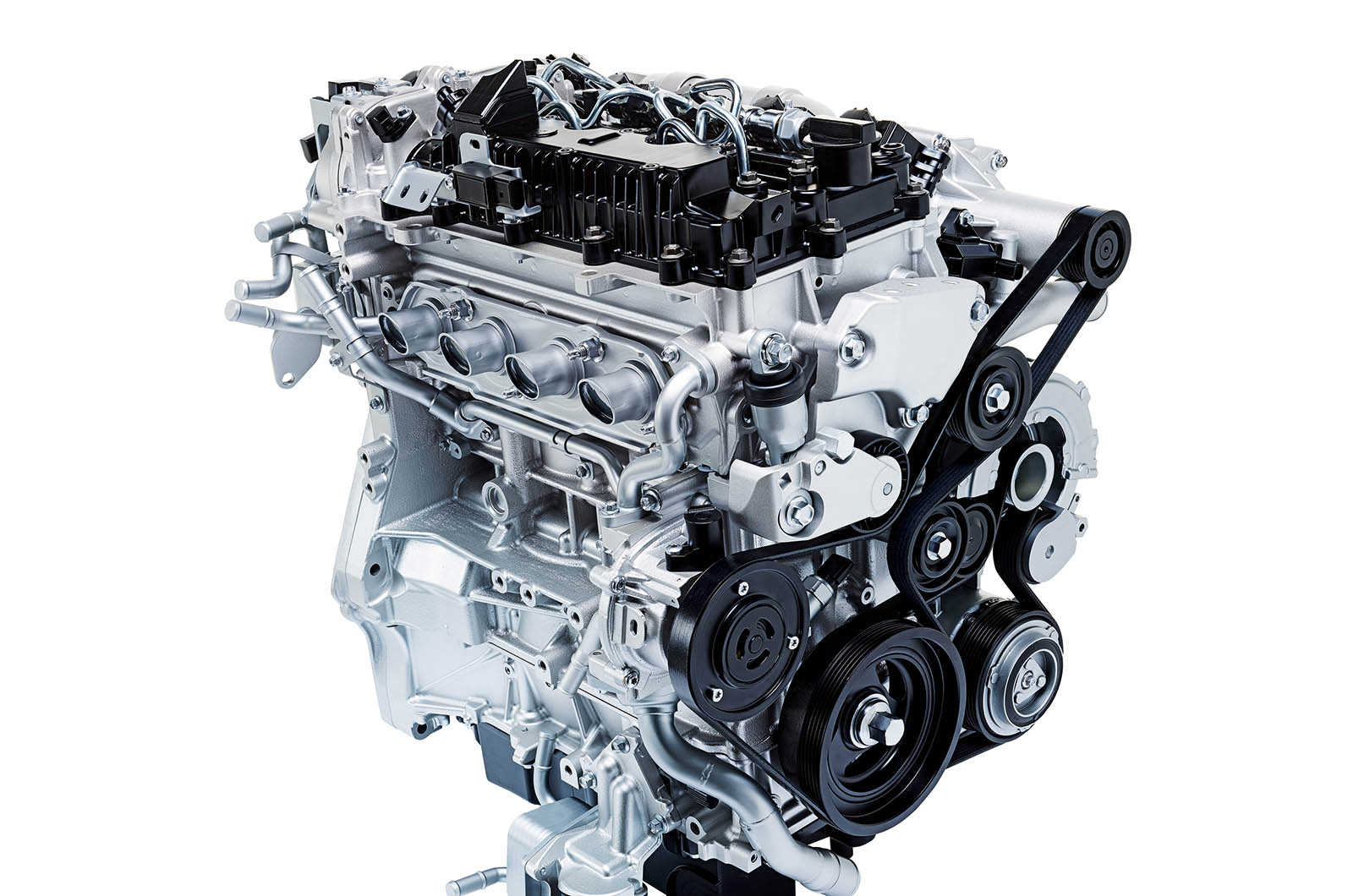 The engine can run in this mode throughout a large part of the operating range but, when the driver accelerates very hard, the engine switches to a conventional mode burning a spark-ignited 14.7:1 air fuel mixture like any other petrol internal combustion engine.

SPCCI is an evolution of a concept called HCCI (homogeneous charge compression ignition), which a number of manufacturers tried but failed to perfect more than a decade ago. The main problem was switching between HCCI mode and conventional mode, now solved by Mazda with SPCCI. 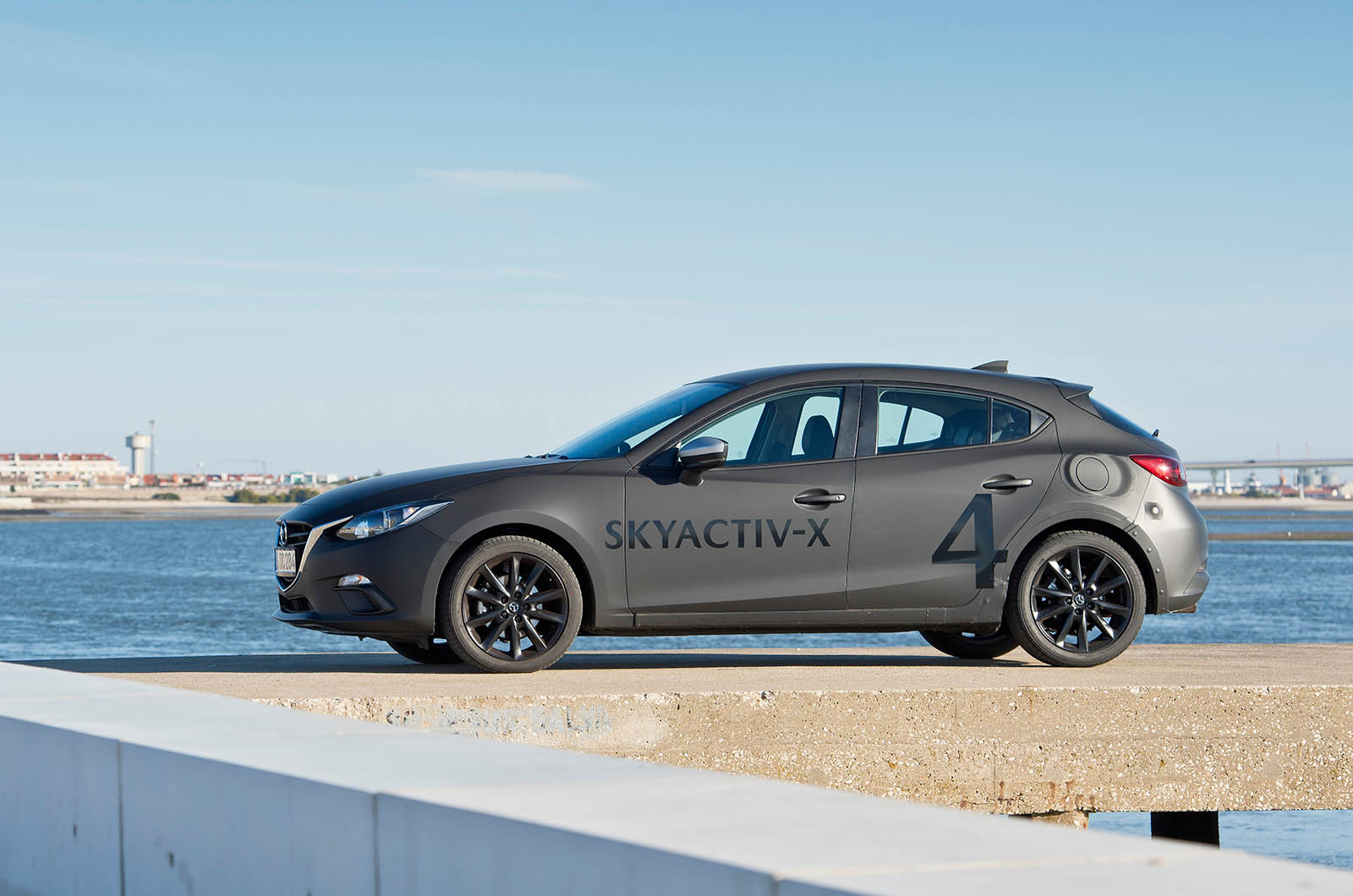 The new Skyactiv vehicle architecture is lighter to improve energy efficiency. It is also aimed at improving driver control by giving a smoother ride by reducing road shocks into the cabin. A stiffer structure using more lightweight steel components helps improve handling and ride, and the introduction of thimble-sized structures called ‘damping nodes’ at crucial joints reduces noise and vibration in the cabin.

This engine’s recent reveal was accompanied by a second look at the Kai concept first shown at the Tokyo motor show last year. The Kai’s clean lines are designed to exploit the light falling on the car’s surfaces and hint at how the next Mazda 3, based on the Skyactiv architecture, could look.

The Skyactiv-X engine has been substantially improved since Autocar tried an early prototype last year.

Driven back to back with a current Mazda 3 on a variety of Portuguese roads in both manual and automatic form, the prototype proved surprisingly refined. There was an absence of combustion noise and, if anything, the engine was smoother and quieter than the production Mazda 3. 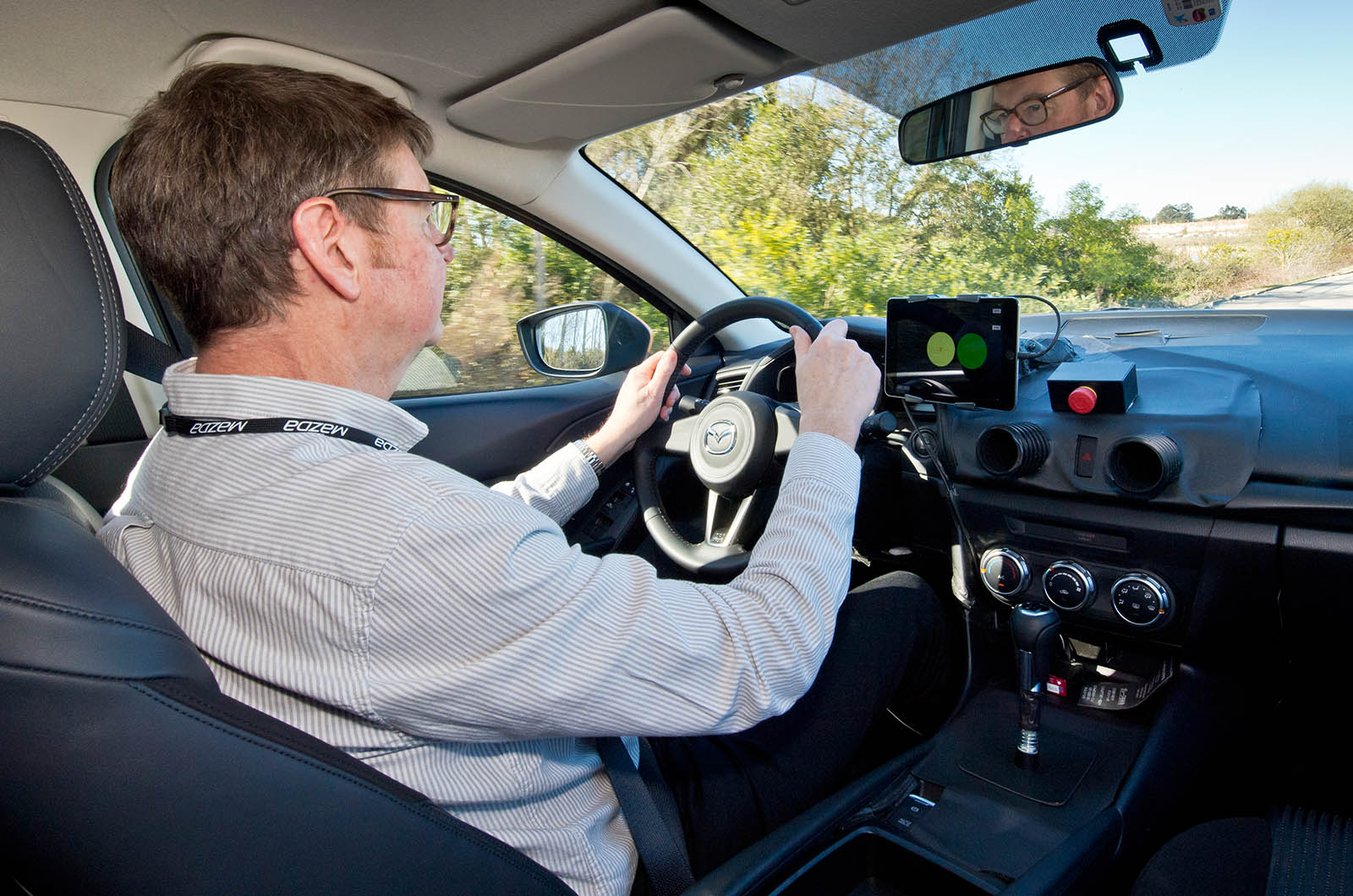 Engineers say the new architecture contributes to the smooth drive with improved isolation from powertrain and road noise.

A screen displayed three green discs to indicate which mode the engine was running in – conventional, lean burn mode or ultra-lean mode. Lean mode was achievable most of the time on both motorways and country roads, and the engine would quite often switch to the most frugal, ultra-lean mode when cruising at a steady speed.

When it goes on sale, the new engine will be subject to the new WLTP test cycle so quoted figures should give an accurate indication of what buyers can expect in terms of economy and CO2 emissions.

Electric great for City drivers and Europe but not for US

Due to long distances driven in the US we can utilize a high efficiency engine - however the constant drone about electric will not take hold on the US due to the vast distances we drive.  I personally love electric vehicles - it's just that the range and time required for recharge completely kills the concept of Electric.   Now if the answer becomes a universal battery pack that can we swapped out at present gas stations for a fully charged unit in a minute or two — then electric is on.  However, the US cannot have 1-2 hour delays on highway charges for even the concept to work here.  Hence - gas engines like the new Mazda will rein and electric will continue dying on the vine here.  The battery packs MUST BE universal and the process highly monitored for this to even be presented again.  The fixed battery option is a loser.

9 months on. Emmm Tesla seem to have sold quite well in the past 9 months since your post

Premium fuel uncharge is 30% as well

I haven’t seen the discussion of RON-Octane level — so can we assume this engine is running on 91+ Octane ?    If so, this erases the cost gain of 30% improved efficiency when compared to 87 octane fuel (at least in the US the 87 is about 30% cheaper).

Premium fuel uncharge is 30% as well

I haven’t seen the discussion of RON-Octane level — so can we assume this engine is running on 91+ Octane ?    If so, this erases the cost gain of 30% improved efficiency when compared to 87 octane fuel (at least in the US the 87 is about 30% cheaper).