BACK TO ALL NEWS
Currently reading: New Mazda 3 spied for first time ahead of LA show debut
UP NEXT
Renault Zoe given zero stars in Euro NCAP safety tests

Mazda will be pulling the covers off its new 3 hatchback and Fastback saloon at the upcoming Los Angeles motor show, but long-awaited spyshots have given us an early glimpse.

It's the first time we've seen prototypes of the Ford Focus rival testing in any form, so Mazda has been adept at keeping it away from prying eyes. The hatchback is disguised in the usual wrapping but the body shape can be clearly seen, showing a design inspired heavily by the Kai concept from the 2017 Tokyo motor show.

The gaping front grille shows a family resemblance between the 3 and the latest CX-5, while thin, stretched headlamps, a long bonnet and curvy profile stay loyal to the concept. At the rear the narrow glasshouse, sloping roofline and steeply raked windowline give it a coupe-like look, and the squat, purposeful stance again isn't dissimilar to the Kai. 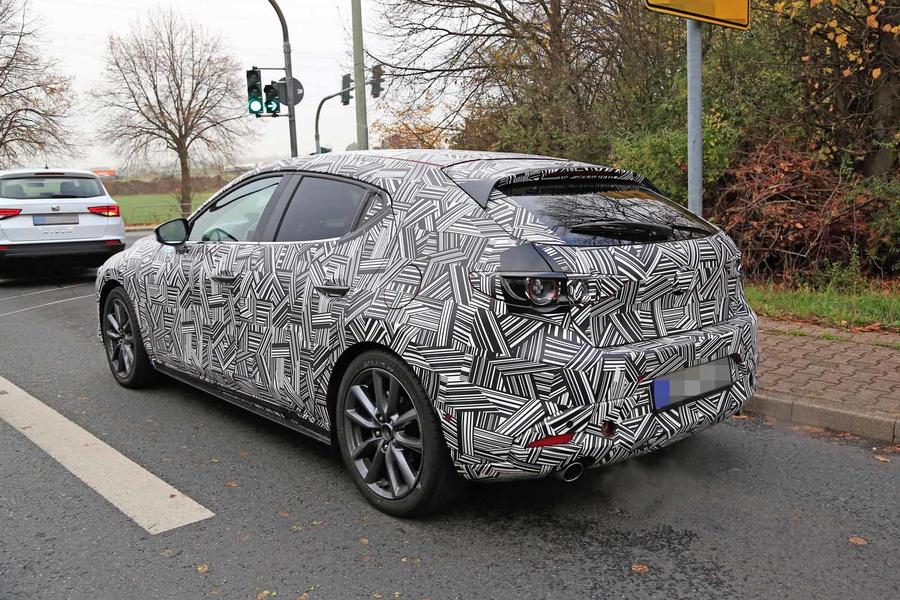 The 3 features Mazda’s new Skyactiv-X vehicle architecture, specially developed to house the brand's new compression-ignition petrol engine, which, the firm says, offers the fuel efficiency of a diesel without turbocharging. Mazda claims "fundamental performance attributes have been raised to a new level".

This new architecture is also intended to improve driving dynamics, refinement and comfort.

Confirming that the all-new 3 will keep its hatchback bodystyle, the Kai concept also hinted that Mazda's next generation of vehicle design will adopt styling cues from past concepts – most notably, the Ferrari GTC4 Lusso-like twin-circle tail-lights, sunken back into the bodywork and split horizontally by a chrome strip. 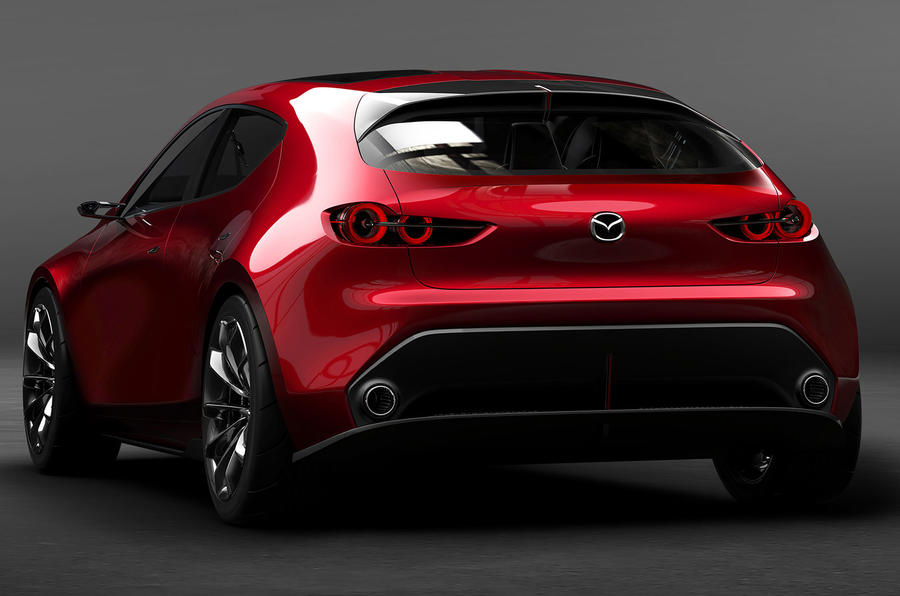 At 4420mm long, 1855mm wide and 1375mm tall, the Kai concept is slightly longer, wider and lower than the current Mazda 3. Its wheelbase is also 50mm longer. Pushing the wheels further towards the corners like this should increase interior space and improve stability on the road.

It's a four-seater, but this will grow to five seats when the production car arrives in the next two years. What won't change, though, is the front-engine, front-wheel-drive set-up.

It's not clear yet if Mazda intends to offer a diesel engine alongside the compression ignition petrol units, but further details are imminent as the car's official unveiling is just a couple of weeks away.

Very stylish evolution of the series. The current one is terrific to drive until you have to reverse on a busy street. Even with the rear camera it is a visibility nightmare.

One of the few companies who produce 98% of concept to road going version. Love the whole thing and really the mini like wheel in each corner this is going to fast become a real drivers love machine

I really like the looks; it seems to have remained faithful to the Kai concept.  The rear 3/4 view may be restricted but Mazda's current range already offers blindspot monitoring and rear cameras on higher spec models.  I hope the interior offers a similar step up in style and quality. The geek in me is now eager to see confirmation of the spec for the new SkyActive X spark compression engine.  Will it be good enough to replace both the current petrols and diesels or just the petrols? And also, will Mazda start to offer hybrid options, utilising their working relationship with Toyota?  I'd happily buy a 3 (or even the next 6 or CX5) equiped with Toyota's current 1.8, 2.0 or 2.5 hybrids, but mated to Mazda 6 speed autos.

I've just answered my own

I've just answered my own question...

And also, will Mazda start to offer hybrid options, utilising their working relationship with Toyota?