BACK TO ALL NEWS
Currently reading: Kia Procee’d GT to go on sale in July
UP NEXT
Stellantis exec: range and charging biggest barriers to EV adoption

Kia Procee’d GT to go on sale in July

The car is powered by a 201bhp turbocharged 1.6-litre T-GDi engine and mated to a six-speed manual gearbox. Kia says the Procee'd GT is its most performance-orientated car to date, able to reach a top speed of 143mph and accelerating from 0-60mph in 7.4sec.

Steering has been tuned to give a more direct feel over the standard car, and the addition of Kia's Flex Steer function allows drivers to choose from three power-assistance settings.

Braking force is provided by 300mm ventilated disks at the front, and 262mm at the rear - the largest brakes fitted to any of the Cee'd range.

A limited-run Launch edition of the GT will also be available. Of the 500 examples planned, just 50 will be coming to the UK. The Launch edition makes purely cosmetic changes over the GT tech trim, adding black inserts to the alloy wheels, an electric sunroof and red ambient lighting in the front footwell.

Kia says it has styled the Procee'd GT to give the car a sporting stance. A new lower, broader front bumper a wide lower air intake help to improve cooling to the engine. At the rear a steeply angled tailgate echoes the Procee'd, but a diffuser section to separate the exhaust outlets has been added for the GT.

The T-GDi engine in the GT is the first turbocharged petrol engine to be offered by Kia in the UK. The exhaust-driven unit raises power output from the Procee'd's direct-injection engine by 51 per cent, while torque - 195lb/ft - has increased by 61 per cent.

Kia is also keen to note that while the Procee'd GT is a performance model, it is still capable of 38.2mpg and has CO2 emissions of 171g/km.

A GT version of the five-door Cee'd is also planned for 2014. 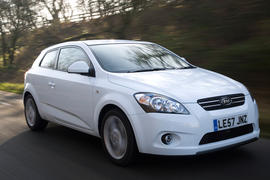 The Kia Procee'd looks the part, but does the drive deliver?

The emissions seem rather high by today's standards. Golf GTI has a few more horses and yet is a few VED bands lower.

And the screaming jet of a hot hatch the Mercedes A45 AMG is almost twice the power and yet cleaner than this 3-door Kia.

Looks nice and is definetly

Looks nice and is definetly good for the money, I just believe the only real issue with Korean cars in general is the appearance of their interiors by looking bland.

Good luck to them with the GT but its just not for me sadly.

Nice car but there are some goofy details going on.

Front bumper is spoilt by the LEDs and foglights. High performance Audis ditch the foglights for more cooling, why can't Kia?

How big is that fuel gauge? Does it really need to be that big, why cant there be an oil temp/turbo boost gauge or something else in there as well?