BACK TO ALL NEWS
Currently reading: Italian coachbuilders: why it's not the end of the road
UP NEXT
New Lamborghini Countach: epic UK road trip in reborn icon

After years of hardship, there are signs of a recovery for at least some Italian coachbuilders. Julian Rendell looks into the future of coachbuilders
Open gallery
Close

Italy’s beleaguered coachbuilding industry – characterised by great names like Pininfarina and Italdesign – is starting to fight back after a decade of treading water in treacherous financial seas.

Pininfarina and Italdesign have new owners and the relaunch of Touring, another great name from the past, is gaining momentum, as exemplified at the recent Geneva show by the Disco Volante Spyder, an exotic, limited-run collector’s car with a multi-million-pound price.

“No one believes it will be easy for the Italian coachbuilders to thrive again, but there are important signs of new life in Turin and Milan after years of struggle, upheaval and closures,” says automotive expert Paul Nieuwenhuis of Cardiff Business School. 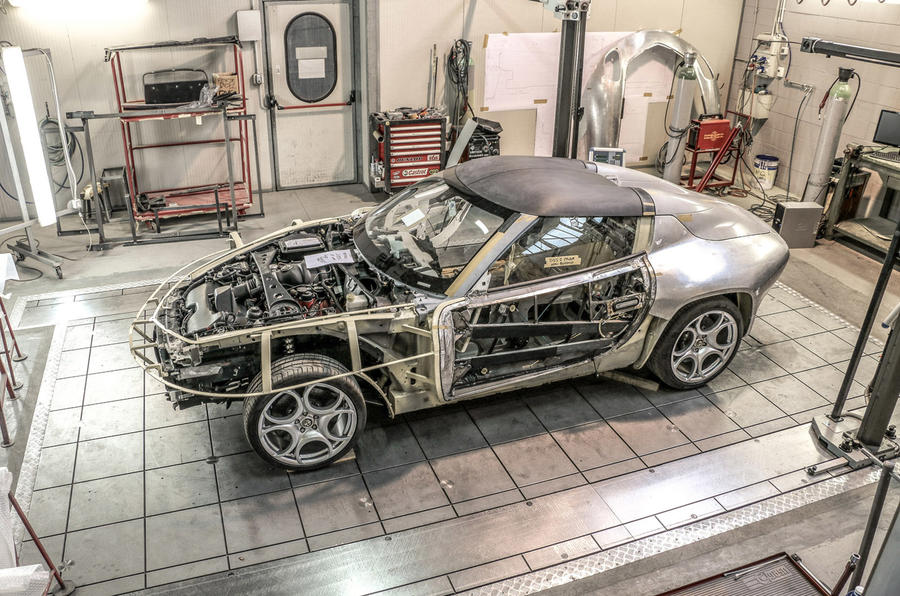 Most significant, Pininfarina, the jewel in the crown of Italy’s coachbuilding industry, finally looks to be emerging from a torrid decade, during which a £395 million debt threatened to drag it under. After years of trying to find a source of new finance, Pininfarina is entering the final stage of a complex £118m debt-for-equity deal that in June will transfer a 76% controlling share to Tech Mahindra, the consulting arm of the Indian industrial conglomerate.

“We will remain independent, with a company listing on the Milan Stock Exchange, but Mahindra ownership gives us stability and the opportunity to perform inside a large global organisation,” says CEO Silvio Pietro Angori.

Tech Mahindra may well be the biggest company you have never heard of. Turnover is £2.5 billion a year and its global workforce numbers 105,000, with more than 2500 in automotive work, much of it processing design and financial data. 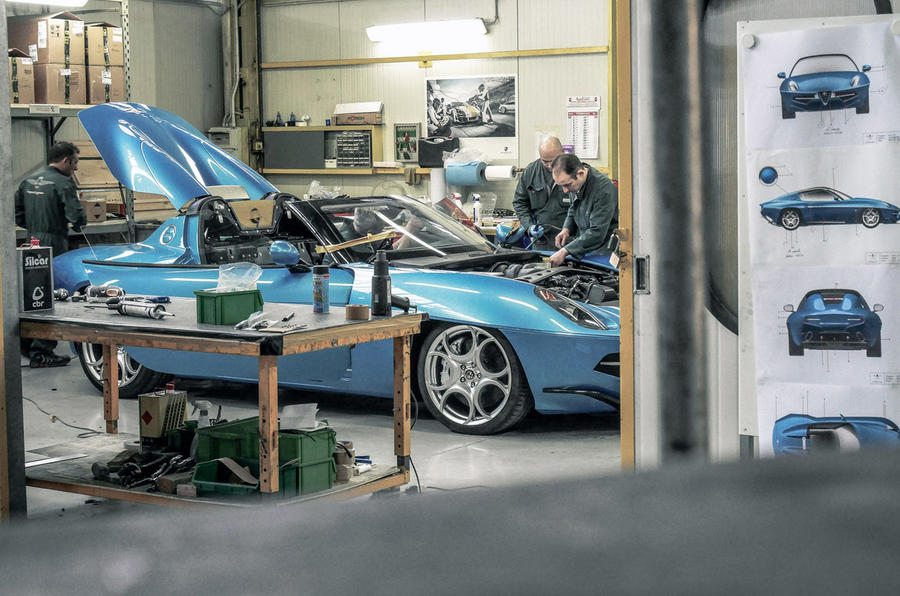 Automotive turnover is £240m a year – Pininfarina’s is £70m – and once the deal is completed, Pininfarina will be part of one of the world’s top three technology consultants, in competition with Tata Services and Infosys.

Under Tech Mahindra, Pininfarina is planning to expand operations around the globe and to help the group double automotive turnover “in the next four to six years”, says Angori.

Angori has been CEO since June 2007, arriving just before the tragic death of family scion Andrea Pininfarina in a motorcycle accident. Angori runs the company alongside Andrea’s brother, Paolo Pininfarina, the chairman. The upheaval of that event, combined with the global financial crisis, threw Pininfarina into a perfect storm and its debt ballooned to more than 10 times the company’s value. 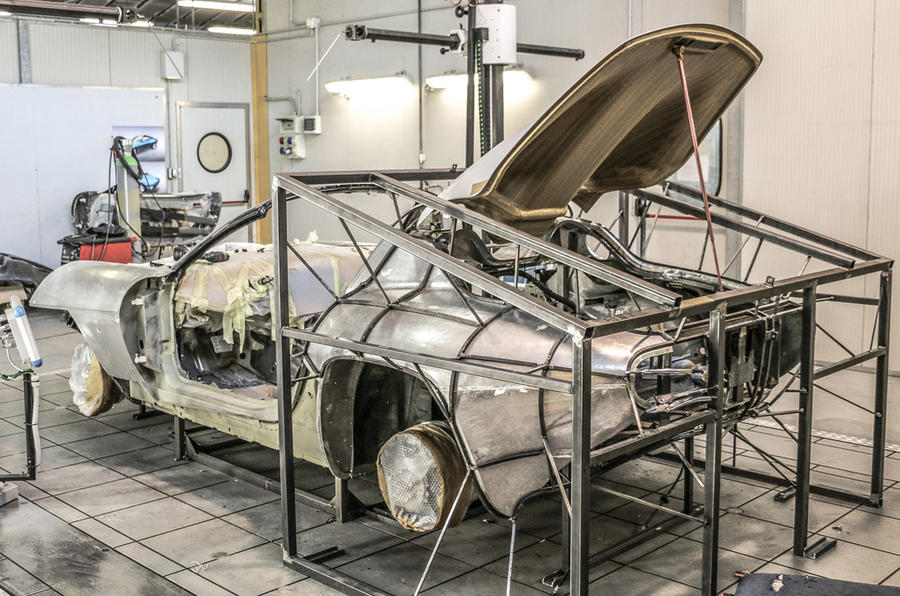 “I don’t have to explain all the troubles that the whole industry experienced – they are well documented – but we are now building a new future for Pininfarina,” says Angori.

All the coachbuilders in Turin and Milan were rocked by the financial crisis, which coincided with multiple major strategic shifts in the car industry that have totally changed the look and shape of the business.

Firstly, car makers have mastered modern CAD design systems to be capable of designing anything. They’ve also nurtured the talent to work those design computers, removing the need to pay for outside design inspiration. Pininfarina, for example, designed every Ferrari bar one from the 1950s until the 2013 LaFerrari. Ferrari design has now moved in-house. 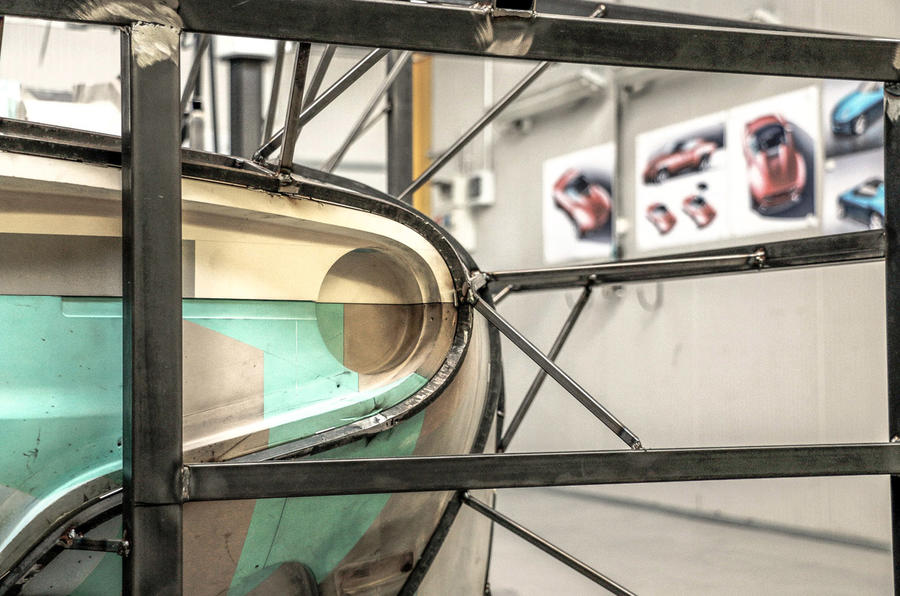 Bertone is the highest-profile casualty of this upheaval, crashing into bankruptcy in 2014 after 102 years in business and joining the list of great design houses already consigned to history (see below).

As a relative newcomer, Italdesign managed to ride out the 2008 global financial shock, but the price was a loss of independence and a sale to the VW Group in 2010, 42 years after Giorgetto Giugiaro formed the company in 1968. Today, a new business-focused strategy is being built up by CEO Jörg Astalosch. 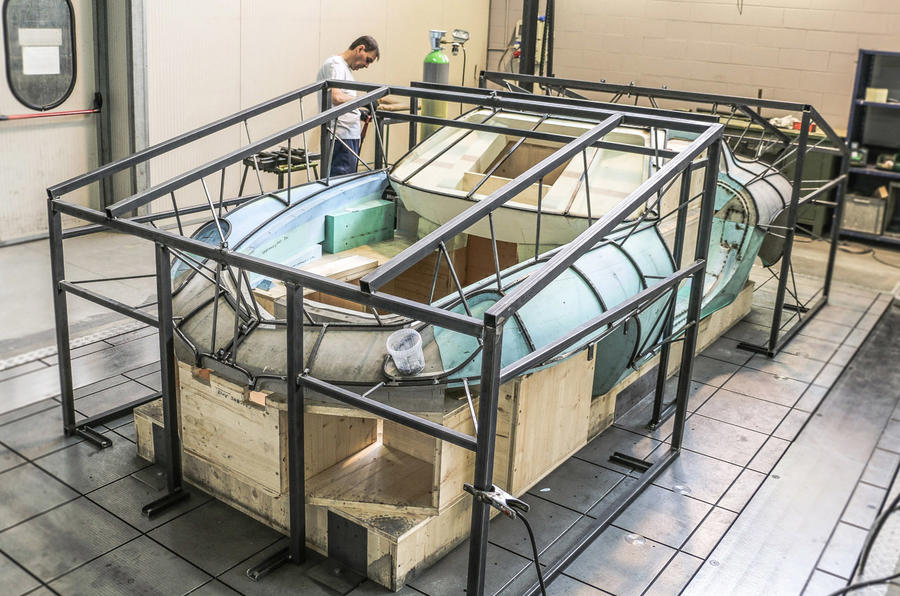 “We are rebuilding around six core competencies,” says Astalosch, “to put our investment money where we can make the most of it.”

The bulk of Italdesign’s work is commissioned by VW Group companies, although Astalosch hopes to expand his base of work for other car companies.

With that in mind, Italdesign’s Geneva show car, the GT Zero, was created to showcase one of those core competencies: rapidly designing and building prototypes using solely virtual techniques, saving the time and expense of the clay model stage. 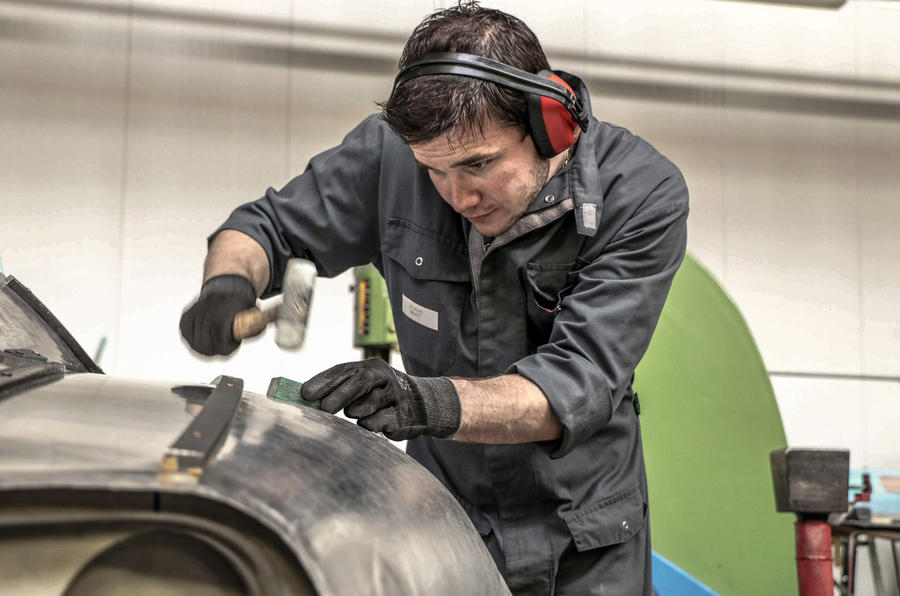 “This is the future. We can be faster and more cost-effective to market, and that is a competitive edge,” says company design chief Filippo Perini.

In trying to win more third-party work, Italdesign’s close link to the VW Group may well prove a stiffer obstacle than Pininfarina’s link to Mahindra, although time will tell.

Italdesign has moved closer to the heart of the VW Group and is now 90% owned by Audi. To reflect the change and the departure last year of 77-year-old company founder Giugiaro, the business has been renamed Italdesign Giugiaro, with a new logo to emphasise its heritage. 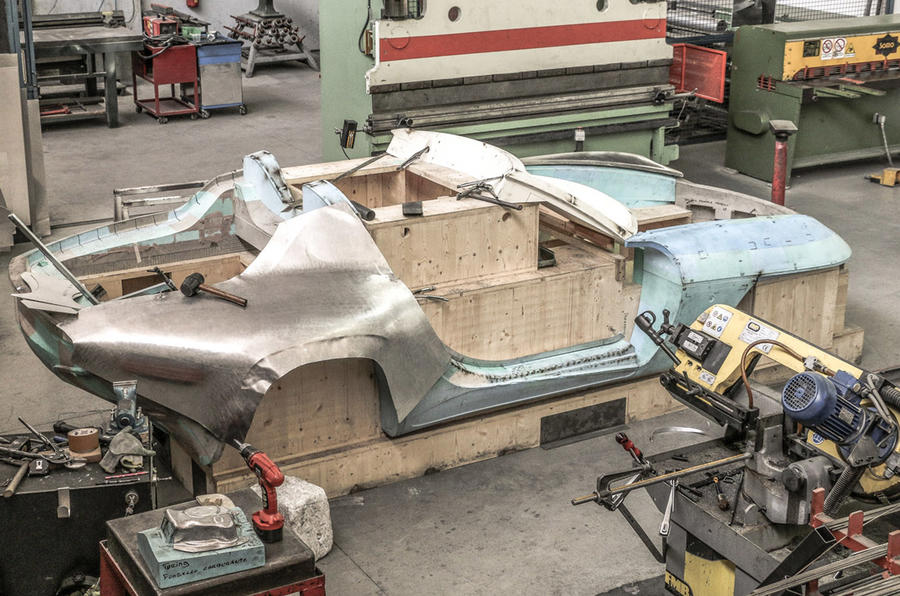 “Last year, business was at a record high in 48 years,” says Astalosch. “The bulk of the work is for the group, but we want to move away from that. We are a think tank for the industry, not just the VW Group.”

Currently, Italdesign’s business is 60% production engineering, 25% prototyping and 15% styling. Designing the structure of a car, its outer panels and their press tooling has long kept consultancies ticking over, but less well known is their expertise in building fleets of test mules – the cars that Autocar spy photographers snap in cold or hot-weather testing. A team of 15 Italdesign panel beaters builds up to 600 ‘pre-series’ cars a year.

Like most consultancies, Pininfarina is also built around three main business areas. Two are process engineering (55%) and design (20%), activities similar to Italdesign. But the third is quite different: custombuilt models, or fuoriserie in Italian. 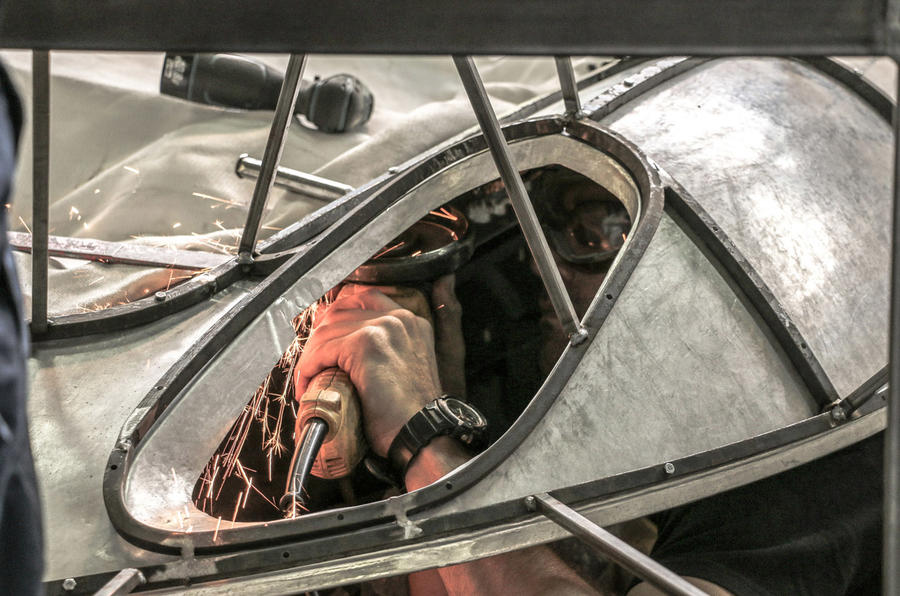 The best known of Pininfarina’s limited-run models is the Sergio, a rebodied Ferrari 458 Spider built in just six examples with a multimillion-pound price. It is mining a rich seam. Estimates suggest 300 to 500 cars a year change hands among collectors at £1.75m and above.

There are more to come and Pininfarina is in the midst of a limited run of 10 unidentified units.

These custom-built cars are the market that Touring Superleggera is also tapping. It is now on its second limited run of the Disco Volante, the open-top Spyder variant. 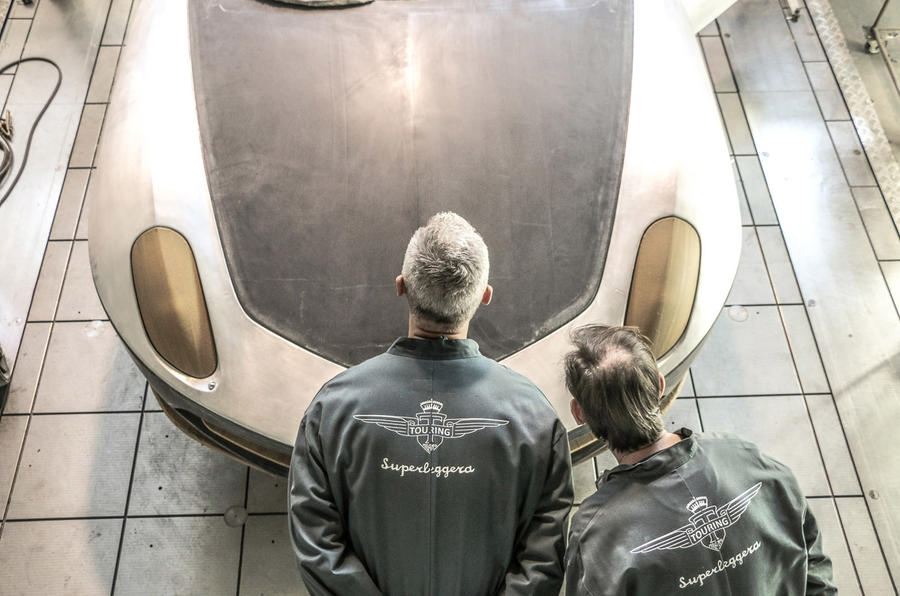 A rebodied version of the Alfa Romeo 8C, the Disco Volante series is a nod to the 1952 ‘Flying Saucer’, whose curvaceous aerodynamic bodywork made it one of the world’s most desirable cars, nine years before the Jaguar E-Type.

Touring is an unusual case, an example of a coachbuilder being brought back to life, 40 years after it became dormant. A group of investors bought the name in 2006 and created a new business, Touring Superleggera, named for the lightweight tubular bodywork invented back in the 1930s. In its day, Superleggera was the equivalent of a carbonfibre tub today: cutting-edge technology. Famously, it was used by Aston Martin for the DB-series of cars and in 2014 it underpinned the Mini Superleggera Vision concept, which introduced the styling of BMW’s third-generation Mini.

“This is what Touring can do now: design and make high-quality small series and hand-built one-offs,” says CEO Piero Mancardi. “Our company is small and we are mostly craftsmen. We put in the hand finishing.” 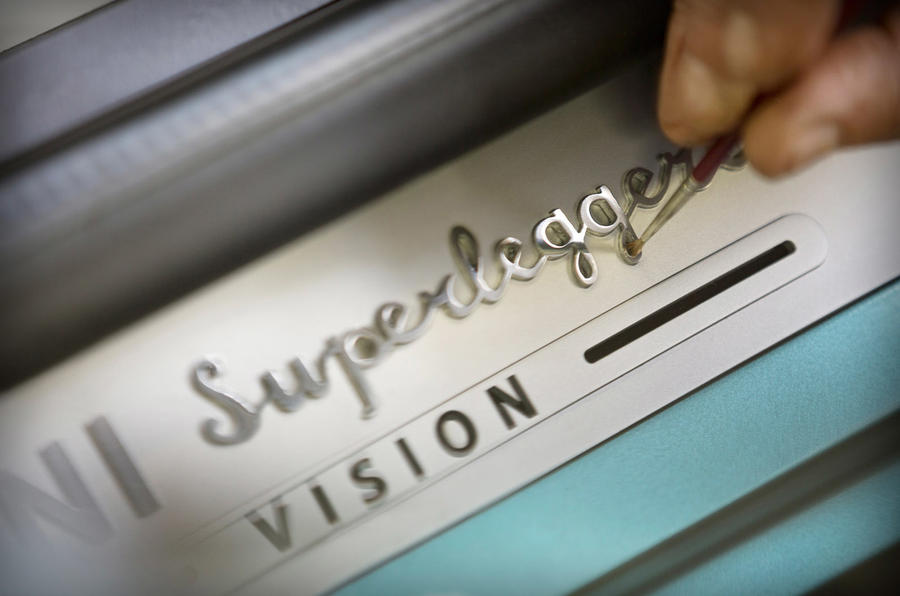 Touring has so far sold six of eight planned Disco Volante coupés and five Bentley Continental Flying Star shooting brakes. A major selling point is the number of hours of hand finishing in each model – 4500 for the Disco Volante Spyder and 4000 for the Flying Star – and, as a result, prices run to millions of pounds.

Restoration is a second leg of Touring’s business, and the third is contract painting high-end models for Lamborghini and Rolls-Royce – the sort of regular and reliable income that provides the base for more glamorous work.

Bread-and-butter work like this is keeping the new wave of design houses topped up, while offering the opportunity to carve out new niches of business. Hopefully that will mean more amazing and exotic cars and a bright future, at last, for Italy’s coachbuilders.

Carrozzeria names that are no more

In the early 20th century, coachbuilders, or ‘carrozzeria’ in Italian, built new car bodies, clothing the running gear of chassis builders like Alfa Romeo, Lancia and Isotta Fraschini. However, two world wars, the all-in-one unitary chassis/body and financial crises have conspired to thin out their numbers to just half a dozen or so today. Here are some of the greats, now sadly consigned to history.

Most famous for its fabulous 1950s, 1960s and 1970s sports cars and concepts, such as the amazing 1950s BAT series of concepts, Alfa Montreal, Lamborghini Countach, Fiat X1/9 and Lancia Stratos. After the firm stuttered through the 1990s, the financial crash squeezed the life out of it and it folded in 2014.

After World War 2, Pietro Frua carved out a niche rebodying Fiats and Maseratis, and by the 1960s a Frua body was the pinnacle of good taste for those with deep pockets. Frua was bought by Ghia and the firm closed when Frua died in 1983.

Ghia made its name with aluminium bodies used in the Mille Miglia in the 1930s, but the highlights came in the 1950s with beautiful Chrysler and Ferrari specials. A decade of fluctuating fortunes culminated in the sale in 1970 to Ford, which maintained Ghia as a design think tank until 2002.

Specialised in low-volume bodies, originally Lancias and Cisitalias, and more latterly the Fiat Barchetta and Lancia Kappa. But after nearly 80 years in business, it closed in 2003 when work dried up.

Fell into Ford ownership at the same time as Ghia. The name is now used as a top-range Ford model designation. Formed post-war, Vignale once had a reputation like Frua for fabulously exotic rebodies of Alfas, Astons and Ferraris.

Cash rich Indian, Korean, Malaysian & Chinese industrial conglomerates look like the best chance for struggling but historic European brands - JLR, KTM etc. It would be great to see these carroserie back in action, producing designs for mass market vehicles. I'd rather have a Bertone bodied Hyundai Coupe than a DS4 for instance.
TegTypeR 11 April 2016

Excellent piece and with the

Excellent piece and with the extra pictures - Far better than the piece in the magazine (understandable as they are limited to space).
kcrally 11 April 2016

What's a Disco, in Italia.

What's a Disco, in Italia.
View all comments (7)