Hyundai has announced pricing and spec details for the new Tucson N Line, a performance-inspired trim line that previews a possible hot N version of the SUV.

Going on sale at the end of this month, the Seat Ateca FR rival will be priced from £25,995. That price gets you a 174bhp 1.6-litre turbocharged petrol engine with a manual gearbox and two-wheel drive.

Standard kit on top of the N Line styling upgrades, detailed below, includes heated seats with electric lumbar support, keyless entry, climate control and front and rear parking sensors. Also available is a 135bhp 1.6-litre diesel with mild-hybrid tech. Both engines can also be had with a dual-clutch automatic transmission.

The Tucson N Line follows on from the i30 N Line launched in 2018. Tweaks to the standard Tucson, Hyundai's best-selling model in Europe, include a stiffened chassis, revised bumpers, new black-painted 19in alloy wheels and a sportier interior.

“This is an understated sporty car with some subtle improvements inside and out, so it brings the N Line character to a Hyundai SUV for the first time,” said Thomas Bürkle, Hyundai Europe’s design chief.

Bürkle’s team has created a more muscular-looking Tucson with time-honoured changes such as a new front bumper, new grille, revised headlights and twin exhausts. New in the front bumper are distinctive ‘boomerang’ daytime running lights, while the headlights feature standard LED illumination and black bezels to emphasise the lamp shape. 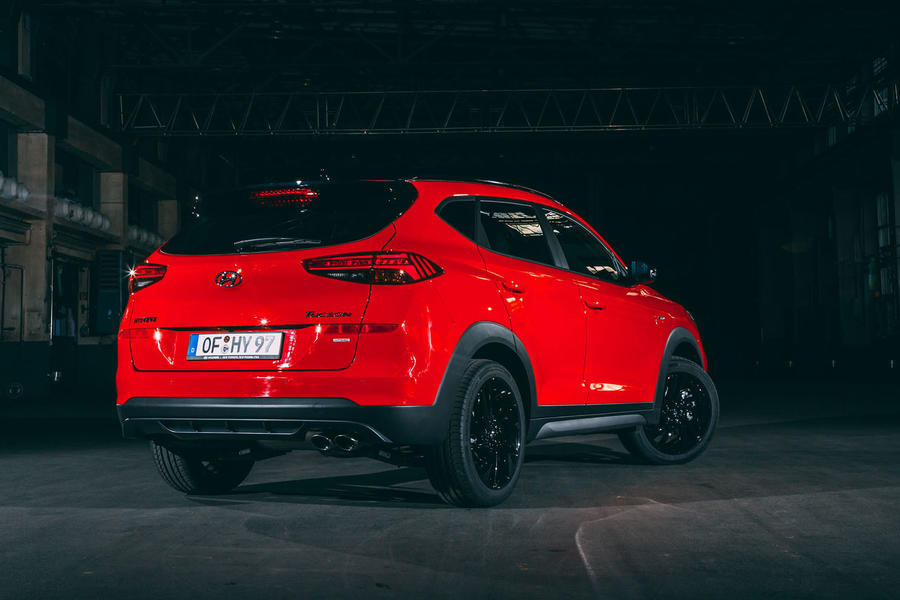 The dominant design theme is to remove all the brightwork from the exterior, replacing it with black trim or black finishes to add some sporty menace to the Tucson.

The window frames are finished in black – as is typical on Audi, BMW and Mercedes sports models – and the grille gets a dark chrome treatment, while the rear spoiler has a glossy black finish.

But the Tucson N Line isn't just about styling. The front suspension is 8% stiffer and the rear is 5% stiffer, while software changes in the electric power steering are claimed to “give a slightly more direct, linear feel at the wheel”. Suspension development was carried out by engineers at Hyundai’s technical centre at Rüsselsheim, Germany. 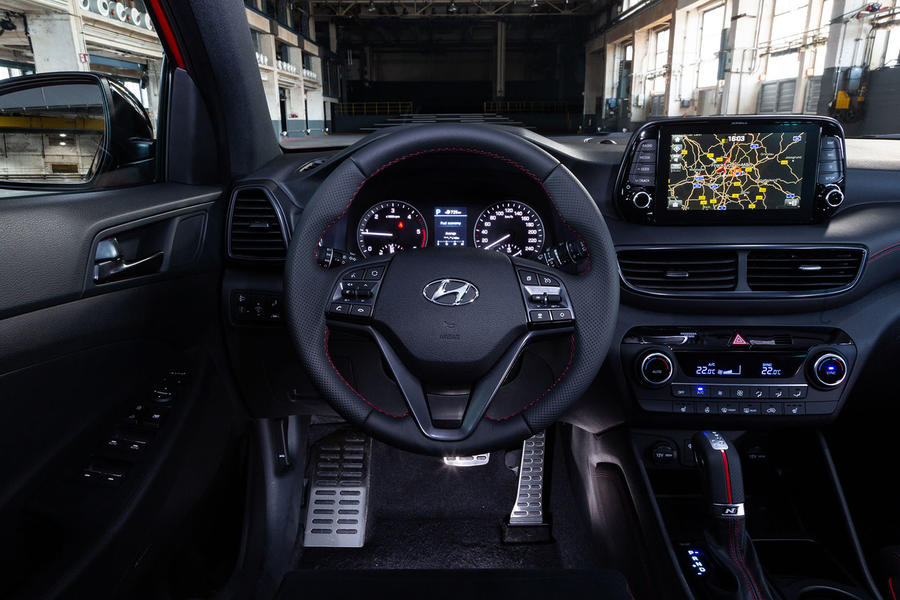 The European N Line range is built around three engines: in addition to the 135bhp 1.6-litre diesel equipped with 48V mild-hybrid technology and the 174bhp 1.6-litre turbo petrol unit is a 183bhp 2.0-litre diesel 48V mild hybrid that won't be available in the UK. Hyundai says the new 1.6-litre mild-hybrid diesel has a WLTP-rated combined fuel economy of 47.1-51.3mpg, with CO2 emissions of 110-118g/km.

Both the UK 1.6-litre models will be front-wheel drive; these currently make up 95% of Tucson sales. With UK demand for the 2.0-litre diesel, only available with four-wheel drive, making up only 5% of sales, Hyundai UK says it can’t justify launching N Line trim with that power unit.

Keeping the 2.0-litre diesel out of the N Line range also creates room for Hyundai to slot in a full Tucson N, although Hyundai refused to comment on the possibility.

One engineering challenge will be to find an engine that isn’t as peaky as the i30 N’s 271bhp 2.0-litre turbo four; that may be exciting in the low-riding hatchback, but an SUV will need a wider spread of torque.

hyudai are really getting the gist of things and understanding that we want sporty vehicles from them (mostly the i20 and i10, for me anyway) but i just think they need to make a car to rival the polo GTI and the up GTI, i reckon they would sell like hot-cakes! and they have the urge, definitly the technology and also the brains (they have the guy from BMW) so i think they should do an AWD or RWD version of one of thier cars or even come out with a new one.

Shame they decided to take the photos in a darkened warehouse.
5cylinderT 14 May 2019

Shame they decided to take the photos in a darkened warehouse.

yo, i was getting so confused i didnt think i posted that comment but look at our names closely and you will understand. hahaha

I like this Tuscon N-Line. Looks good in the same way Ford Kuga ST-Line looks better than Titanium model and Vignale.

I agree with the comments that black wheels do not a compliment overall style. From a distance or when moving it looks like hubcaps are missing. Hyundai should follow Audi and Volvo with the silver/black diamond cut wheels or just offer a lighter anthracite grey wheel.

I was going to buy a Ford ST-Line X 1.5 Ecoboost petrol but may hold back for this Tuscon N-Line. Hopefully Hyundai will offer an optional wheel choice.

I like what Hyundai and Kia are making these days. A far cry from 10-15 years ago. Our local Kia dealer told us Hyundai Kia are same company.