From £17,4058
Hyundai i30 N Line gains hot hatch-inspired looks, but isn't all that sporty to drive
Open gallery
Close

This is the new Hyundai i30 N Line. Think of it as a sort of mash-up of the South Korean manufacturer’s rather exciting i30 N hot hatchback and the not-so-exciting standard car that a member of the village bowls club might be inclined to buy.

It’s a formula we’re becoming increasingly familiar with in the car world. Take the name of nearly any manufacturer’s more hardcore performance division, slap 'line' on as a suffix and, voilà, you have a new model that looks fast, but isn’t really. Ford’s done it with its ST-Line models, Volkswagen’s got R-line and, at the other end of the spectrum, Mercedes has AMG Line. With N Line, Hyundai is vying for a slice of that same action.

So, these changes, then. Unsurprisingly, they’re pretty much all aesthetic. The front and rear bumpers ape those you’ll find on the i30 N, there are natty-looking 18in alloy wheels shod in 225/40 section Michelin Pilot PS4 rubber, a twin exhaust and, of course, plenty of N Line badging. In the cabin, you’ll find new sports seats, as well as an N Line gearlever and steering wheel.

As for the actual mechanics, there’s not a huge amount that’s new. At the nose sits the same 1.4-litre T-GDi petrol motor you’ll find in non-N Line i30 S, which sends its power to the front wheels via a six-speed manual 'box as standard, or a seven-speed DCT for those who don’t fancy swapping cogs themselves.

That engine develops 138bhp at 6000rpm, while its 179lb ft of torque is available from 1500rpm. MacPherson struts comprise the front suspension, while at the rear there’s a multi-link arrangement. The N Line model’s dampers have been firmed up, but Hyundai’s product man couldn’t specify an exact percentage. The brakes have been tweaked, too. 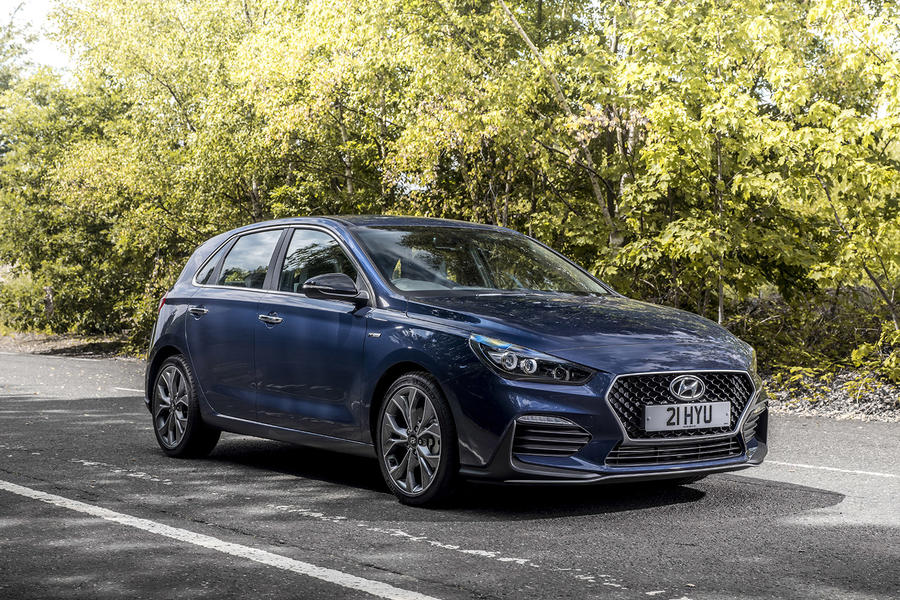 Well it isn’t that quick, and it’s nowhere near as exciting as its i30 N big brother, but there’s still a dynamically well-sorted hatchback on offer in the i30 N Line. The steering suffers from the same lack of feel as the vast majority of electronically assisted racks do, but it does at least weight up nicely as you wind on lock. It’s quick enough in its gearing and lends the car a nose that seems quite happy to go sniffing for an apex or two. Those new tyres feel plenty grippy enough, too.

The firmed-up dampers haven’t quelled a noticeable amount of lateral roll through bends, but you shouldn’t mistake ‘noticeable’ for ‘concerning’. The manner in which the Hyundai i30’s mass shifts around its longitudinal axis is entirely progressive and predictable; you can feel the outside tyres loading up as you turn in to a bend, before shifting back in a steady fashion as you turn the wheel in the opposite direction. Again, not particularly exciting, but tidy and well sorted nonetheless.

That slightly stiffer set-up hasn’t compromised the way the i30 N Line rides, either. At speed on lumpy Buckinghamshire roads, the car never crashed or jarred, instead ironing out crests and compressions with an air of nonchalance. Things got a bit choppier around town, but only fractionally.

And the engine? Well, don’t get too excited. While quiet and refined at a cruise and around town, there’s a bit of a need to wring it out if you want to make hurried progress. Despite its torque sitting at around 1500rpm, it doesn’t feel as though it makes any reasonable progress until the crank has spun up to 3000rpm or so. Overtakes, therefore, require a downshift or two.

Not that downshifting is at all a chore. The six-speed manual is a rather tactile and direct 'box, and one that’s actually rather entertaining to interact with on the fly. It’s not quite as slick or precise as that of a Honda Civic or Mazda 3, but it does the trick nicely. The DCT isn’t bad, either. There’s no discernable shunting at low speeds and it doesn’t seem to have a hard time searching for the gear it wants when you add a bit of throttle. The same can’t be said of all dual-clutch transmissions. The only complaint here is that when you knock it into manual mode, the the screen that shows the gear you’ve selected often decides to display the recommended, most economical gear instead. There also seemed to be a touch more jostle in the automatic’s low-speed ride, but perhaps that was all in this tester’s imagination. 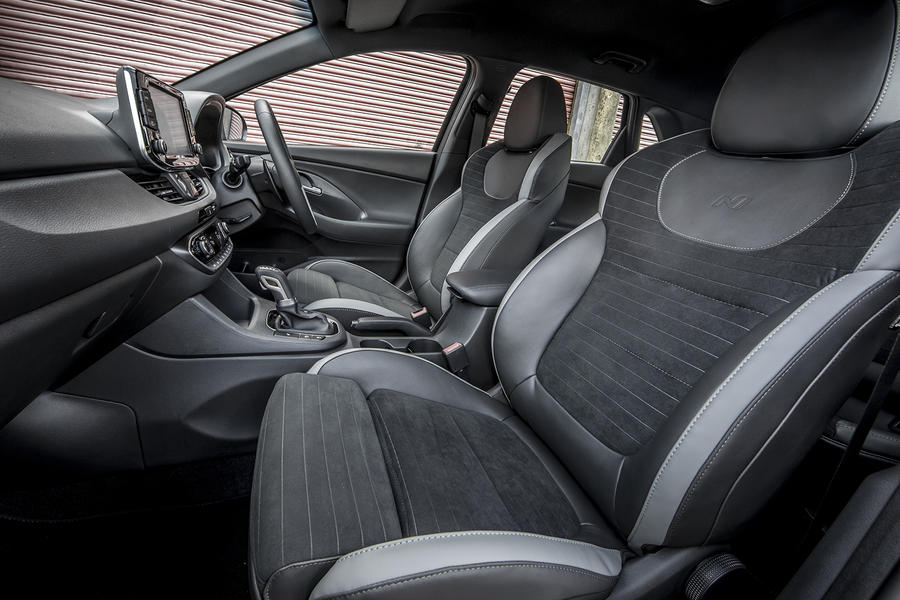 If you like the idea of hatchback that looks sporty but kind of isn’t, the i30 N Line fits that mould well. Maybe not as well as a Ford Focus ST-Line might, but still well enough. It looks handsome, drives nicely and has room in the back for two adults — just. There’s also plenty of standard kit to play with, such as an 8.0in touchscreen infotainment system with DAB radio, Bluetooth and Apple CarPlay, while a reassuring number of active safety systems are thrown in, too.

While the i30 N Line might not exactly shine in this increasingly crowded market, it does at least inject a bit of flair into the otherwise relatively demure standard car. And all for £21,255.

That said, if you can find an extra £4,500, you could have the full-fat i30 N. And, since you’re reading Autocar, we’d hazard a guess that it might be something to think about. 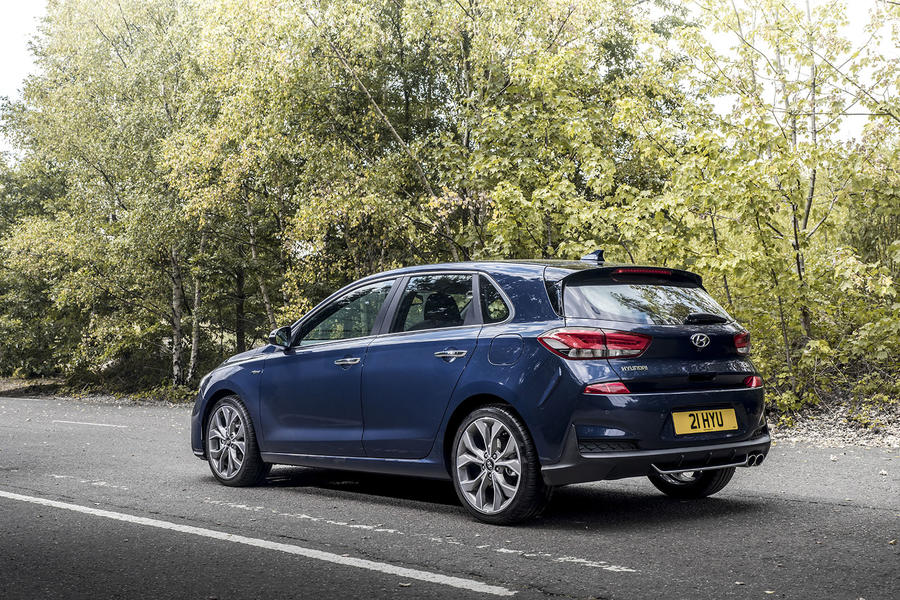 Take a Test Drive of your Favorite Hyundai Car

Wonderful Post. Hyundai Car's are rulling All over india. High Technology, Dashing Looks and  Customer satisfaction is priority of Hyundai india. I30 is wonderful car.

if you want to experience why Hyundai india is best Car manufacturing Company. Then take a test Drive of your Favorite Hyundai Car.  For Book hyundai i20 Test Drive visit our Official Website. We are Capital Hyundai, one of the Best dealer of Hyundai Cars in Noida.

it is common to have issues with setting up your router for the first time. Her is the guide for you just visit Belkin.range

Hi Guys, Have fallen in love with the N Line Automated Gear Knob.

Am driving an i30 back in singapore. Would really appreciate if someone can advise me a merchant to buy this gear knob. My email is afkl0602@yahoo.com

thank you and have a nice day guys!