“We have done a lot of development work to give it a unique AMG feel,” says Steffen Nowack, before leaning up against the front fender of the new Mercedes-AMG GLE 53 4Matic Coupé.

The head of SUV development at Mercedes-Benz’s AMG performance car division is clearly proud of what he and his team of engineers have achieved with what initially will be the most sporting of the new range of second-generation GLE Coupé models. “We’ve drawn on a lot of experience going right back to our first real performance SUV, the ML55 AMG,” he adds.

Nowack isn’t so much referring to the new GLE 53 Coupé's drivetrain – a mild hybrid unit originally launched in the CLS 53 that combines a turbocharged 3.0-litre in-line six-cylinder petrol and 48V start motor developing a combined 429bhp and 384lb ft. Instead, he’s talking about its chassis, which he reveals has been heavily reworked as part of efforts to ensure all new AMG models are more differentiated from their standard siblings than in the past.

We’re at the top of a Romanian mountain, and the heat sink from the prototype we’ve just experienced on one of the most epic roads you’ll find anywhere pings loudly as we discuss the finer points of the new AMG model’s handling.

Following its unveiling at the recent Frankfurt motor show, the technical specification of the GLE 53 Coupé is now well known. As is its performance potential, with Mercedes-AMG claiming a 0-62mph time of 5.3sec and limited top speed of 155mph. They’re impressive figures, no doubt. But what Nowack is keen to show us is just how much work has been concentrated in making it what he describes as AMG's best handling SUV yet.

With clenched fists he’s making circular gestations about the directness of the steering. “I’m really proud of what we’ve achieved. It’s the best steering I’ve been involved with,” he says. 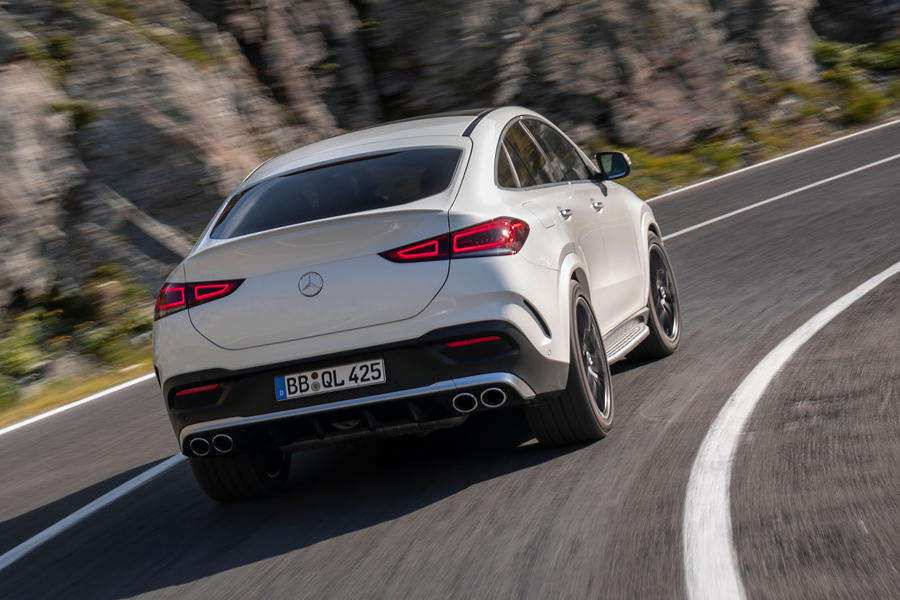 How do you provide an SUV weighing well over 2000kg with what AMG likes to describe as “agile driving qualities”? For a start, the wheelbase has been shortened by 62mm over the GLE 53 SUV at 2935mm, although it is now 20mm longer than the old GLE 43 Coupé. The front and rear tracks are also increased by 17mm and 8mm at 1681mm and 1720mm respectively over its predecessor.

Although the larger footprint is significant in providing the GLE 53 Coupé with greater overall stability than its predecessor, Nowack says it is the detailed changes AMG has brought to the suspension that really make a difference, not only in lifting its dynamic prowess above its predecessor but also other second-generation GLE coupé models.

The engineer, who heads up the chassis development of all of AMG’s SUV models, alludes to some very meticulous modifications to the front end of the GLE 53 Coupé, which receives its own unique subframe, lower control arms set 20mm closer to the ground than those of the standard GLE suspension and new wheel bearings offer greater toe in effect.

Elsewhere, the steering ratio has been made more direct. “It’s more direct than any previous SUV from AMG,” says Nowack, who says the GLE 53 Coupé boasts the sort of steering response and turn-in sharpness you’d expect from a more much smaller and lighter car in its most sporting setting. “It really is a big departure from the standard GLE Coupé. There’s more feel and a much more direct feel,” he claims. It is little wonder, then, that AMG decided not to provide the new model with four-wheel steering. 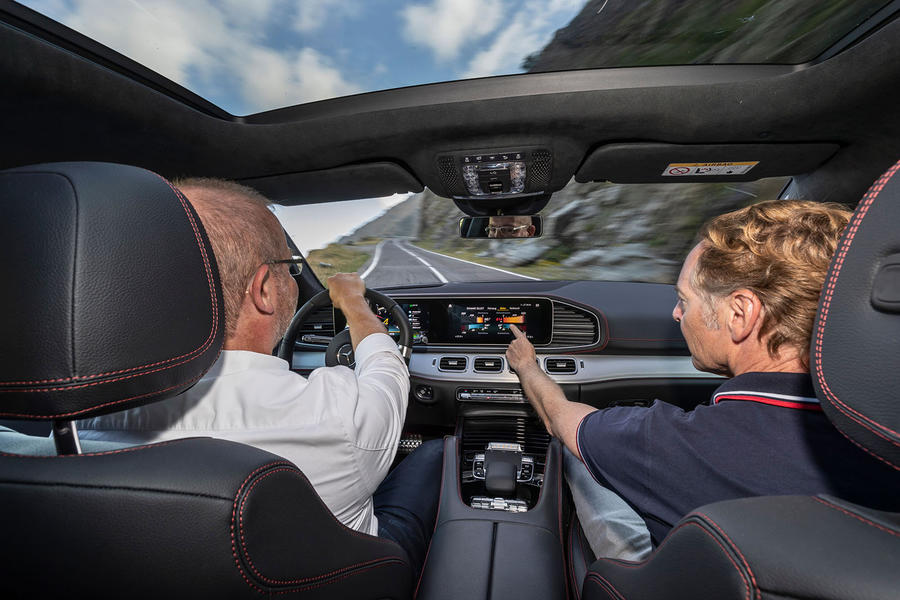 Placing the power to the road is a uniquely tuned four-wheel drive system. Nowack describes it as being “rear-biased”, though the apportioning of the drive is continuously variable between the front and rear wheels depending on the driving conditions. The GLE 53 Coupé also receives its own individual mechanical differential at the rear.

To cope with the added performance potential brought on by the new engine, the new AMG model also receives its own braking package with 400mm front and 345mm rear discs. They’re allied to two-piston callipers all round as standard, though buyers can specify optional six-piston front callipers for added braking ability.

Every GLE 53 Coupé will come with a so-called AMG Driving Dynamics system, which allows the driver to choose between three different driving modes: Comfort, Sport and Sport Plus. What AMG has tried to achieve is a broader range in character. While it has concentrated much of its efforts at raising the sporting qualities of the new model, it also says it has succeeded in making it more compliant in comfort.

When the talking’s finished, we get to experience the GLE 53 Coupé. For now, we’re able only to ride shotgun with Nowack. It is obviously not an ideal situation, particularly with a car that is intended to major on driving qualities, but if you were to choose a road in which to conduct such detached judgement, the Transfăgărășan, or DN7C as it is known to the locals, is a good starting point. Winding over the Carpathian mountains of Romania, this rolling ribbon of bitumen has it all – tightening hairpins, fast off-camber corners, unsighted crests, smooth and coarse chip surfaces. You name it, it delivers. It is hell for any car, and as the concentrated look that soon appears on the face of the AMG engineer attests, a clear challenge for the driver, too. 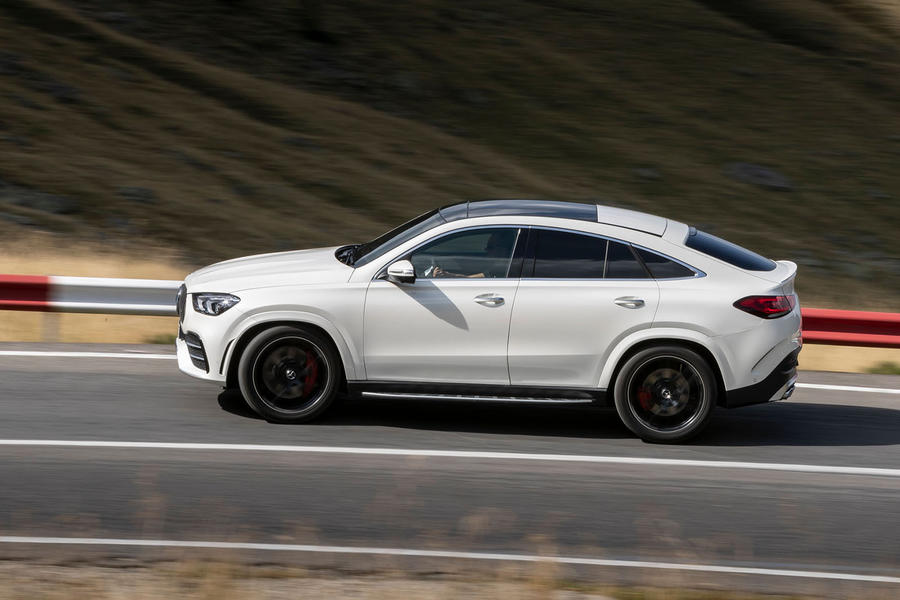 A few things quickly stand out from the heavily bolstered passenger seat. From the outset, it is clear the GLE 53 Coupé possesses a good deal more performance than the older GLE 43 Coupé. You feel it mostly in the acceleration out of tighter corners. The generous low-end torque and strapping mid-range of the mild-hybrid drivetrain provides the new AMG model with a liveliness that belies its 2260kg kerb weight. With a sports exhaust, it sounds good, too, with a distantly raspy tone under load and the odd crackle on the overrun into corners. There’s also a welcoming smoothness to the drivetrain that makes it enjoyable to travel in over longer distances.

It doesn’t take too long on the Transfăgărășan to determine the chassis of the GLE 53 Coupé is very well sorted. Despite running 22-inch wheels with optional 285/40 front and 295/35 tyres, it possesses an admirable degree of suppleness on all but the worst surfaces. Turn-in is quite brisk for such a large car. However, the inherent compliance evident in the ride is fully matched by the body control, which is exemplary. It feels harmonious, and with such generous amount of rubber and four-wheel drive, it remains well planted when asked to accept big speeds in tricky tightening radius corners.

Our very first run in the GLE 53 Coupé was brief, but if our experience in the passenger seat of the early pre-production prototype on unfamiliar Romanian roads is any indication it should make its mark in what is developing into quite a market for sporting SUVs. Still, it will need to be at the top of its game to match the competition, which includes the new BMW X6 M50i, Jaguar F-pace SVR and Porsche Cayenne S Coupé. On that note, it will be intriguing to see which one come out on top.

Given the demographic of the buyers, why does 'steering feel' matter?

Been thinking about this mild hybrid engine

Still a mystery quantifying what the hybrid provides as far as an overboost type asssit. We know it runs the electrical system, spools up the supercharger at low revs and feels much more responsive over the older 43 even if torque quoted is the same and acceleration not much better. But nothing tells us the total syste ouputs across the rev range to justify is there? I am generally not one of those new tech will lead to write-offs in x years as cost to replace too high. But for this car what happens in 3-5 years when the 0.9kw battery starts to degrade? Does the performance advantage disappear?  whats the minimum to run the electricals supercharger? Then when I decide to replace the battery is that an engine/gearbox out and i guess to replace a bespoke lithium ion battery of that size is several thousand? Happy to be corrected is there are Merc mild hybrid experts out there.