BACK TO ALL NEWS
Currently reading: Mercedes-AMG GLE 53 Coupe makes public debut at Frankfurt
UP NEXT
Motoring heroes: the most inspiring people in the car industry

The new Mercedes-AMG GLE 53 Coupé, a performance-oriented reworking of the new GLE Coupé, has appeared in public for the first time at the Frankfurt motor show.

A prelude to the full-blown GLE 63 that’s expected next year, the GLE 53 features a 3.0-litre twin-turbocharged inline six petrol engine with 429bhp and 384lb ft of torque.

It also has a 48V mild-hybrid system, making use of the firm’s EQ Boost starter/ alternator that delivers an additional 22bhp and 184lb ft for short periods and improves on-paper efficiency. One of the turbos is of the conventional exhaust gas-driven variety, with another made up of an electric compressor driven by the 48v system.

The unit makes the SUV capable of 0-62mph in 5.3sec (the same as the regular GLE53) and a governed 155mph, yet also a claimed 30mpg combined. The latter is an NEDC correlated figure rather than the more realistic WLTP figure, however.

As with other Mercedes-AMG models, there are revisions to the chassis, including retuned active ride control and air suspension, a more direct variable-ratio steering set-up and a high-performance braking system with 400mm-diameter front discs. 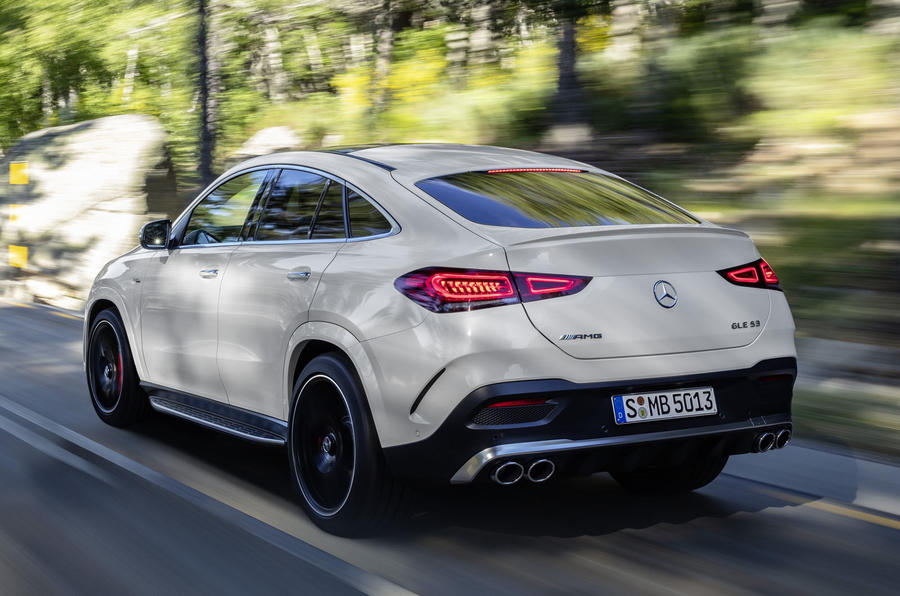 The car sits 15mm lower to the ground than standard in Sport and Sport+modes, and lowers to the same point above 75mph in Comfort. The firm also claims the 60mm shorter wheelbase than the standard GLE further boosts agility.

AMG-specific styling modifications inside and out also feature, such as specific bumpers with larger air intakes and chrome louvres, a silver chrome front splitter and flared wheelarches. Quad tailpipe trims for the AMG exhaust system also mark it out.

Furthermore, an optional AMG Night package with black exterior trim detailing and tinted windows is available. Six wheel designs can be ordered, all from 20-22in in size.