BACK TO ALL NEWS
Currently reading: First Morgan Plus Four 70th anniversary models roll off line
UP NEXT
Why now is the time to buy a proper high-mileage hero

The first four Morgan Plus Four 70th anniversary roadsters have rolled off the production line at the company's Malvern factory, ahead of customer deliveries later this year.

Limited to just 20 uniquely specified cars, priced at £60,995 each, the 70th anniversary marks seven decades since the model's 1950 debut. It also celebrates the switch from the steel ladder chassis it has always used to the new CX bonded aluminium platform, which was introduced in the Plus Six and is set to be used in the new-generation Plus Four.

The four cars were completed before Morgan closed its factory for one month in order to help fight the spread of Covid-19 – the first time it has closed for an extended length of time since World War 2.

The 20 cars, painted in platinum metallic in honour of their 'platinum' anniversary, have all already found homes. Each car will also have its chassis painted gold, with a motorsport-inspired front valance and an exterior blackpack, and will roll on Satin Grey wire wheels. 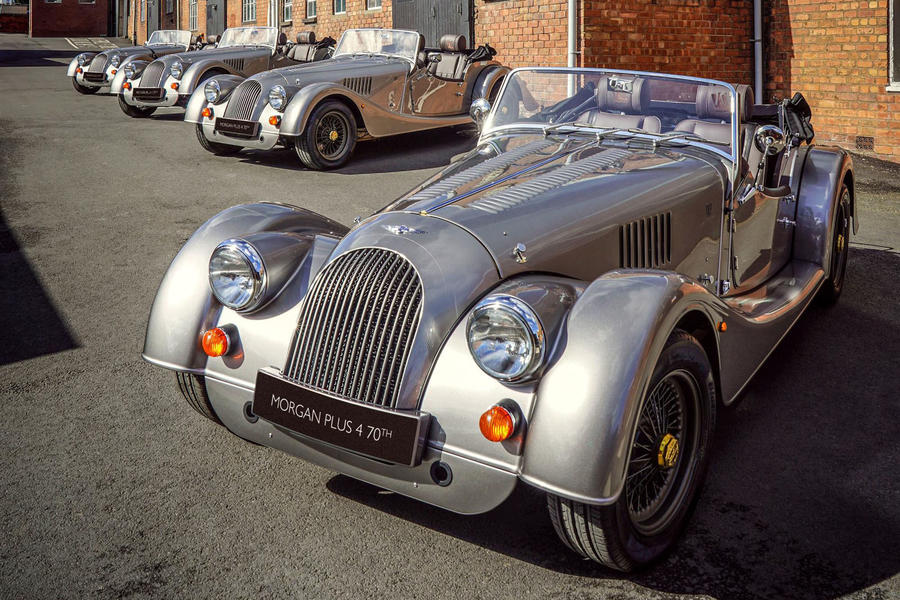 Inside, each car will carry an individual numbered dashboard plaque. Heated 'performance' seats will be trimmed in black leather (with monogrammed head restraints) and fascias will be finished in Ravenwood, a wood so dark that design boss Jon Wells describes it as “almost piano black”.

The 70th anniversary cars will come with a special engine map configured by Morgan’s in-house performance arm, Aero Racing, and a new exhaust from the same source. These lift power from the standard 154bhp to 180bhp, shaving around a second off the 0-62mph time, to “less than seven seconds”. More important than the stopwatch time, Morgan experts say, is the fact that the engine revs much more freely.

All-new Morgan feels like progress in lots of ways, and has a world-class powertrain, but also feels like it's not yet the driver’s car it might be

Although Morgan’s 4/4 and Roadster models have also used the steel ladder chassis, the 70th Anniversary Plus Four will be the company’s only move to mark the chassis change across its range.

Morgan bosses had planned for the whole batch to be ready for delivery during April, but with the ongoing Covid-19 pandemic forcing a temporary shutdown, those orders are expected to be completed once restrictions are lifted.

Sporky, I think you're completely missing the point of a trad Morgan. Many people do, and understandably so. However, for those who do "get" what a trad Morgan is about, then its demise is a crying shame. It's not a revival of an old car, nor is it some kind of "neoclassic." To call the view down the bonnet "cliched" even while acknowledging that it's "brilliant" is one piece of evidence of this. This is not a good modern car -- it's a newly-produced old car that has been continually produced. The "modern upgrades" make it objectively better, but they do NOT make it a better experience to some people. The character of the traditional Morgan is comprehensively different from the Aero chassis cars, and I'm sure from the CX chassis cars. I'm not saying they're not great in their own right -- I think they are, and I'd love to try a new Plus 4 (I maintain that the lack of a manual 'box in the Plus Six is an abomination). That said, the Z-section steel chassis sliding pillar-suspended Morgan was a literally unique car in the modern world, and its loss is very sad. As I said inmy earlier post, its ancientness is authentic. That didn't make it "good" by modern objective standards, but it did make it wonderful. This 70th Anniversary car is gorgeous (and better looking by some margin than the new CX chassis cars), and truly the end of not only an era, but of an experience.

Maybe the last Morgan to be made?

Since the car industry is in meltdown due to Covid-19, Morgan & many other car companies risk going out of business. So this Plus 4 70th Annniversary model is not only the last steel chassis car but may also be the last Morgan ever made?

I disagree - tried a Roadster

I disagree - tried a Roadster and loved it, but not for the sliding blah blah suspension or the various creaks.

What made it great was the open top, the cliched-but-brilliant view down the bonnet, the obvious lightness, the noise, and the reaction it got.

If you keep all those things but give it a few modern upgrades it's only making it better. Losing the gear lever and extra pedal don't take away from the experience any more than adding a manual choke would have enhanced it.