BACK TO ALL NEWS
Currently reading: New Morgan Plus Four arrives with BMW power, new chassis
UP NEXT
Lion's pride: Peugeot 508 PSE vs BMW and Volvo rivals

Morgan has launched a completely revised Plus Four, the second of its new generation of BMW-powered models to use the all-new CX bonded aluminium platform pioneered last year in its traditional-looking but all-new Plus Six.

The car replaces the old, steel chassis 4/4, Plus 4 and Roadster models and is expected to account for around half of Morgan’s annual volume of around 900 cars a year, when customer deliveries begin in late spring. Prices start at £62,995 for the entry-level six-speed manual model, the first time a manual gearbox has been offered in the new chassis. The eight-speed auto version costs £64,500.

Though very similar-looking to the outgoing Plus 4, the new car (which adopts “Four” for its name instead of “4”) is entirely different from its predecessors under the skin; Morgan says only 3% of parts are carried over. The Four’s version of the boned aluminium CX platform is almost identical to that of the Plus Six, apart from necessities such as different engine mountings, but like its predecessors the four-cylinder car itself is a little narrower than Morgan’s most powerful model — in this case by 84mm — by use of shorter front and rear double wishbones, modified wings and slightly smaller wheels and tyres.

The car still incorporates the usual Morgan high degree of hand manufacture: it has many hand-beaten aluminium panels (though not the wings, which are Superformed) and these are supported by a hand-crafted ash body frame, plus a hand-trimmed leather interior. One notable achievement is the way the the new double wishbone suspension is adapted to low-offset 15-inch wire wheels, a difficult engineering challenge properly regarded by Morgan engineers as a must for the new Plus Four. Silver-painted wires are standard equipment, but elegant alloys are also available.

The new Morgan’s four-cylinder engine, a BMW TwinPower 2.0-litre turbo four (which has a modular relationship to the Plus Six’s in-line 3.0-litre six) produces an impressive 255bhp at 4400rpm, plus 295lb ft of torque between 1000rpm and 4300rpm. The Plus Four weighs a modest 1009kg at the kerb (around 66kg less than its six-cylinder relative) so performance is in the same impressive class as the outgoing V6 Roadster: The auto can run a 0-60mph sprint in just 4.8 seconds (0.4 faster than the manual) with both versions turning a a top speed of 149mph.

The new Plus Four’s pricing represents a considerable hike over the entry level for the outgoing steel-chassis models (which have been rushed by traditionalists; only about 20 cars are left) but Morgan points out that the new car is 65% more powerful than the outgoing Plus 4, and much more capable on the road, while delivering very similar fuel consumption (around 40mpg combined) and emitting 15% less CO2. Morgan bosses say the low CO2 figures (159g/km auto, 165g/km manual) will greatly assist export sales. 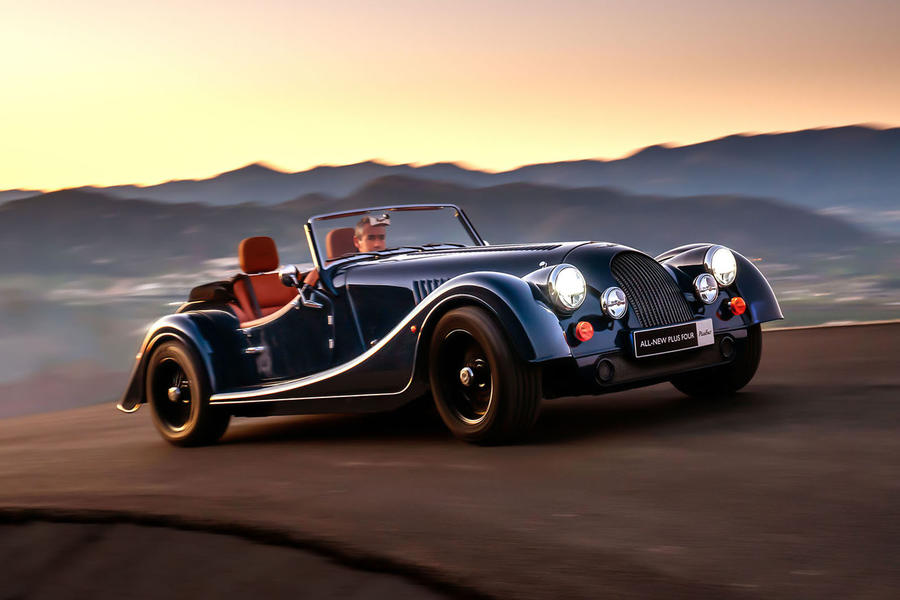 Morgan also breaks with tradition in the Plus Four by providing a much higher level of standard equipment: every car gets silver 15-inch wire wheels, power steering and air conditioning, a mohair hood, round door mirrors and a front undertray. There is still a huge choice of options, however.

Despite its plethora of changes to the Plus Four: the all-new, much more rigid chassis, the all-independent double suspension and much improved steering — which bring the car an entirely new level of dynamic capability on modern roads — the company still promises “the famed Morgan driving experience.” According to managing director Steve Morris, “the Plus Four’s agility, response and balance will be instantly familiar to anyone who has driven a Morgan sports car, past or present.”

Morgan boss on how investment will boost company​

I totally agree that Plus Four looks great. I study the technical specifications in more detail, mainly paying attention to the BMW engine and how the car behaves on the road. I'm just in search of articles that will help in essay writing. I find the material useful. It is easy to read and understand.

So glad to see the manual

So glad to see the manual 'box has returned. I hope this doesn't fake the engine sound, which BMW does with this engine in its BMW home and is a crime that should be subject to the death penalty.

Somethings not quite right

Somethings not quite right about the front end - the wings cut off too abruptly. I wonder if theyll make an electric version soon.